Met Jen bright and early (6:50) in the sugarbowl carpark at Cairngorm mountain. Worth noting the ticket machine was out of action.

We crossed over the rode and dropped down to the bridge before climbing back up and started walking along the good path.

We soon made it to the Chalamain Gap which had snow at the entrance. Its some place and the walls make it feel calustraphobic. Picking our way through wasn;t too difficult but imagine it would be harder on wet rock. Once out the path was good as we dropped down tp the Lairig Ghru. It a long hike down the Lairg Ghru and some of the way is tough going. There were still some snow patches and boulder fields to navigate especially by the Pools of Dee. 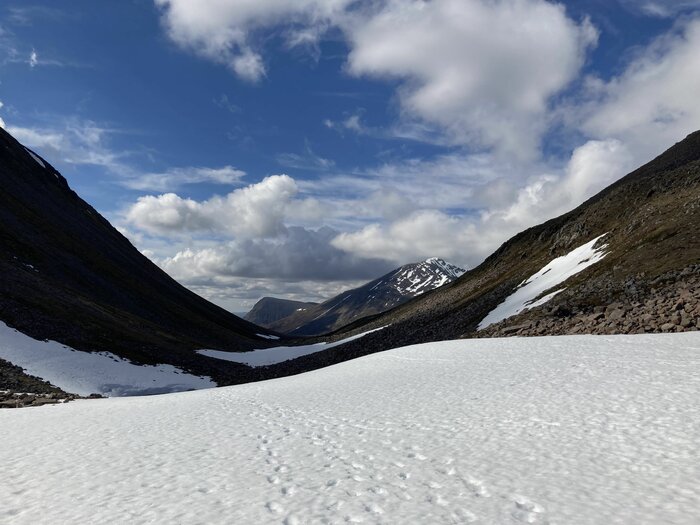 Eventually we made it to corrour and were pleased to see we done a fair chunk of ascent.

Toilet was padlocked but there were a few tents dotted about.

The pull up to the bealach from here was steep but on a good path and not too long. We also took the time to fill up the bottles near the top.

It was a little boggy at the bealach but once we turned left for the last 100m up the Devil's Point the path was good and we bounded up in record time. We also got checked out by an eagle as we climbed. Views were spectacular from the summit over to Deeside and back down the Lairig Ghru. After the descent the work started with a 400m steady pull up to the summit of the munro top. We stopped here for lunch taking in the views and glad that we were over halfway in terms of ascent and distance. Cairn Toul was then only a small climb but had snow on the summit which made the boulder fields a little more interesting.

After a quick rest we headed over to angel's peak. The majority of this climb seemed to be in snow which slowed us down. The view from here was special aross to Braeriach and over to the Munros east of the Lairig Ghru. Soon it was time to head on again and we headed round to Braeriach. This part had large cornices and was mostly through snow. We found footprints to follow to save some energy and made it to the one part of the Wells of Dee that was visible. Managed to refill the bottles without getting stuck in the snow hole and headed on to the summit of Braeriach. We didn;t hang around on top as we were in the wind. Form here it was a fairly straight forward decent and this side of Braeriach had a lot more footprints to use.

Once we had dropped down to the river it was back to the climb up to the Chalamain gap which I had been dreading. This was actually ok and we were through in no time and back on the path to the sugar bowl. We made it back to the cars about 7pm

Great to see the campsite at Loch Morlich looking busy in the evening heat.
Click to mark this as a great report. Register or Login free to be able to rate and comment on reports (as well as access 1:25000 mapping).