This was a day-and-a-half.

I was up bright and early to get myself to Edinburgh bus station and by 7.15 I was at Kinross Park and Ride waiting for the 7.27am X53 to Tillicoultry, ready for a day out in the Ochils.

Forty-five minutes later I was still there and it had become clear the bus wasn't coming (something I later confirmed with First Southeast and Central). There were more than 90 minutes until the next one and my confidence in the service was shaken so I jumped on the next bus that turned up heading back to Edinburgh.

That arrived in time for me to catch Border Buses' X62 to Eddleston and by 10.25 I was walking - rucksack weighed down with maps of hills 50 miles away - past the Horseshoe Inn and up by the kirk towards Boreland Farm. The road up towards the kirk Excellent day for walking in the Borders

I hadn't really sorted out a firm plan for this one other than to get Bowbeat Hill and Blackhope Scar "in the bag". I'd done Dundreich on a glorious sunny, frosty, snowy day in 2019 so I had a good idea of the route, thinking I'd probably go out and back, but I'd also seen MalkyC's report from 2015 which ended at the bus stop a couple of miles north of Eddleston https://www.walkhighlands.co.uk/Forum/viewtopic.php?f=9&t=57996.

The first part of the walk up towards the summit of Dundreich was great. Going past the farm, I followed the track through the first field, then branched off right beyond some trees to find a gate and a path which turns into an ATV track up the hill, Finding another gate, another track goes around Brown Dod before starting to peter out as it gets near the top. The track contours up and around Brown Dod

I skipped the summit of Dundreich which I kind of regret as it's the nicest of the Moorfoots, but I was mindful that I wanted to be back at a bus stop well before dark - nothing worse than waiting at a rural bus stop in half-light, hoping the driver spots you in your dark blue coat.

So I made my first mistake. Bowbeat Hill windfarm looks tantalisingly close from the slopes of Dundreich and even though I knew I needed to go around the head of the cleuch that divides the two hills I cut away from the track too early and spent the best part of half-an-hour bouncing around like an eejit in heather and moss. Back on track. Looking towards Bowbeat

I got myself right in best Southern Uplands manner - I followed a fence and picked up another track which got me going in the direction of Bowbeat Hill. After a short stretch of firm going, the track got wetter and wetter and in parts was impassable, so there was a fair few detours into the heather before I reached the pretty unwelcoming perimeter of the wind farm. Welcome to Bowbeat Hill - sounds like a fun place 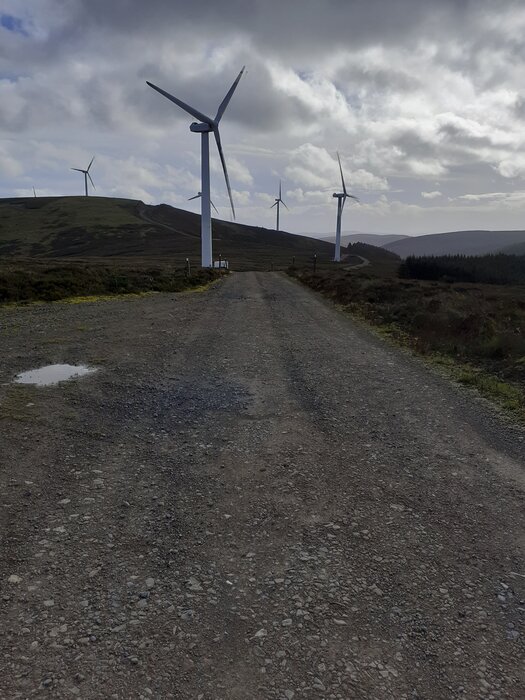 A mile or so of this - great

Although the windfarm track made for easy going, the walk across Bowbeat Hill was pretty soul-destroying. I stopped off at Turbine 15 to wander around and find what was probably the summit, but enthusiasm levels were dropping alarmingly as I trudged off towards Blackhope Scar. Out of the windfarm and heading up again Looking back at Bowbeat Hill

Once out of the windfarm, there's an ATV track up the Graham. It's wet here and there, but nothing like before the windfarm and nothing in the world like what was to come later. The going gets rougher and wetter

A moment's lapse of concentration had me heading due east into the boggy expanse of the Garvald Punks, but I quickly corrected and turned left over increasingly haggy ground to the top of Blackhope Scar. Approaching the top of Blackhope Scar It was getting cold and windy here, so I paused only for a swift cup of tea, checked the time (two hours and 20 minutes until my preferred bus) and got going again. The way forward. There's all sorts hidden there.

This was a couple of miles of astonishingly tough ground. Bogs, hags and random, unexpected pools of water barred the way as I did my best to follow the fence, energy levels draining rapidly. Well-waxed boots and gaiters have rarely been more necessary. After what seemed like a lifetime, but what was maybe an hour, I spotted the track that heads over the Kips. I couldn't spot an easy way to reach it so bashed through heather, tussocks and various wetness to get there. Looking over to Dundreich on the last stop before the serious business of hurrying to catch a bus.

From this point it was just a case of completing about five miles to the main road. I opted for the track over the top to Hirendean Castle. The going was much easier now, but it was still a relief to get to Gladhouse Cottage.

The last march along the road was in fine late afternoon sunshine and quite enjoyable, even with tired legs. I made it to the main road for the X62 back to Edinburgh an hour later than expected.

Definitely one if those I'm glad I did but would never dream of doing again.

Surprise solitude in the city

Short stroll in the heart of Wales