What I did on my holidays - part 7

Many years ago, when I was young, athletic, good-looking and Shrewsbury-based, I tramped up and down many Welsh hills and mountains, finding my way with map and compass, wearing army surplus gear and happily oblivious of hill lists or bagging.

Somehow in all those trips to Tryfan, the Glyders, Cadair Idris, the Arans and Rhinogs, I bypassed the Berwyns. Visiting family in Shropshire, this was a good chance to put that right and at the end I was left wondering how it had taken me so many years to tackle these hills.

Starting late (again!), I got snarled up in Friday holiday traffic around Shrewsbury (some things never change) and finally got to Pistyll Rhaeadr just before 1pm. The expensive waterfall car park was virtually full and closes at 5.30pm, so I found a spot in one of the lay-bys a short way down the road, walked back up towards the waterfall before taking a right turn through the gate just before the car park and following the path through the woods.

There's a choice of path or track up towards the top of the waterfall, I chose the path for no reason other than it felt like I was getting there quicker. On another warm, hazy afternoon I worked up a fair sweat on this section, pausing for a breather and views where the path and track rejoin. 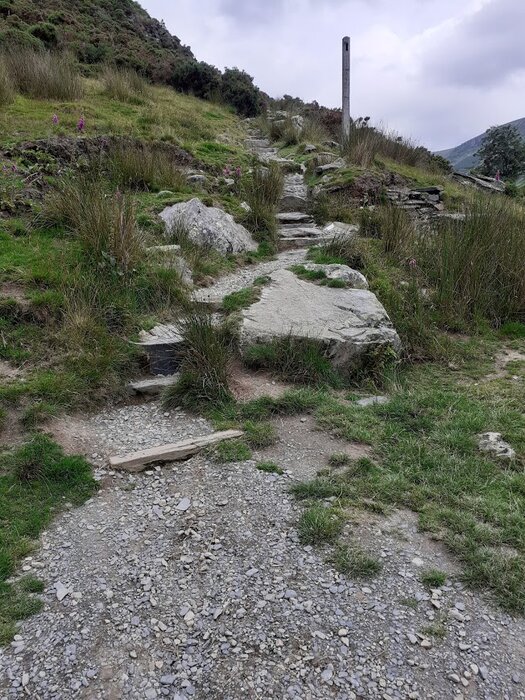 Path after emerging from the woods. The track is just as good a way. 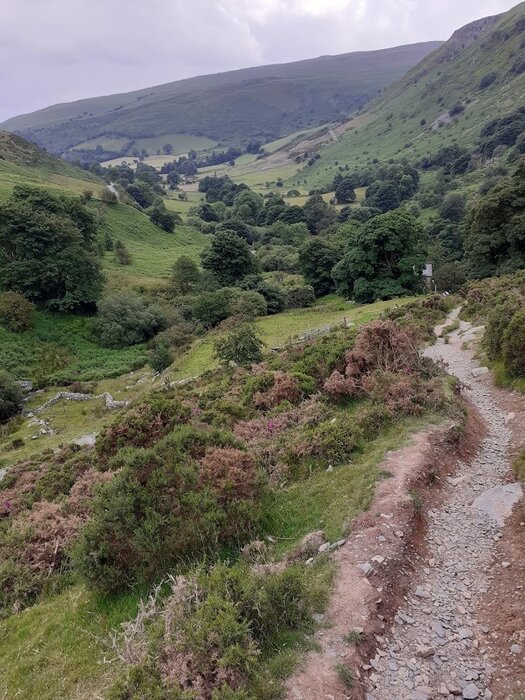 Looking back down the valley

From there it was straightforward, heading uphill on an obvious path and keeping going up. The ground was mostly dry and about an hour and 20min after starting I was at the top of the first top Trum Felen, the view opening up over to the ridge and Cadair Berwyn. 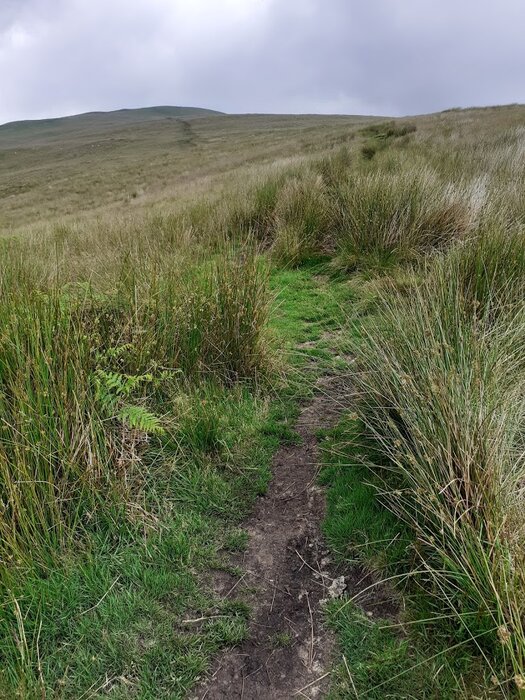 The path heads towards Moel Sych 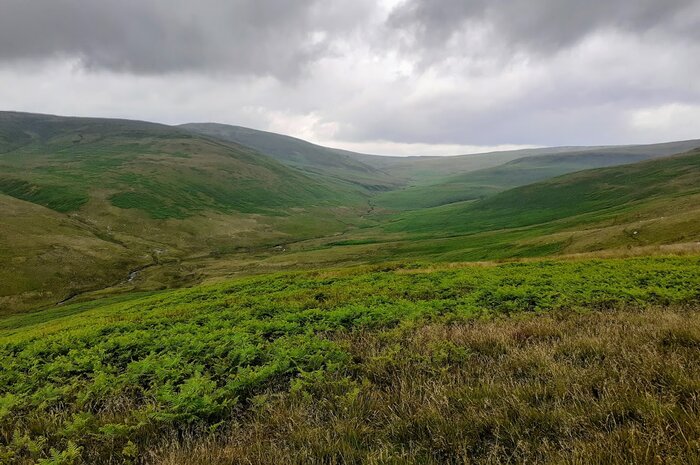 Valley running north west, Post Gwyn in the distance on the left 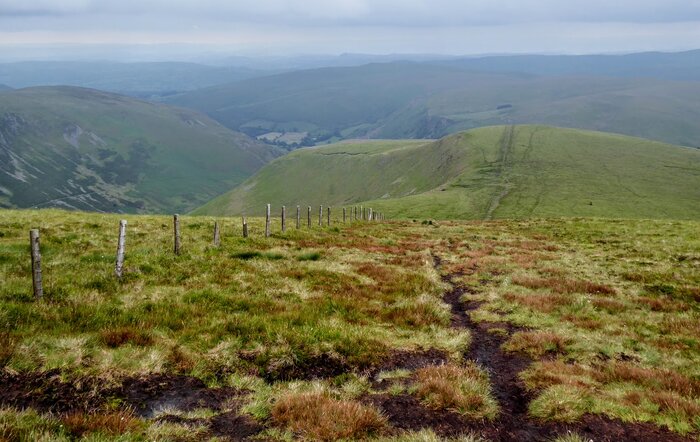 Looking back on the way up Moel Sych

A slight descent led to the only wet part of the way up to Moel Sych and there was a little bog-hopping that probably could have been avoided if I'd moved further away from the fence. 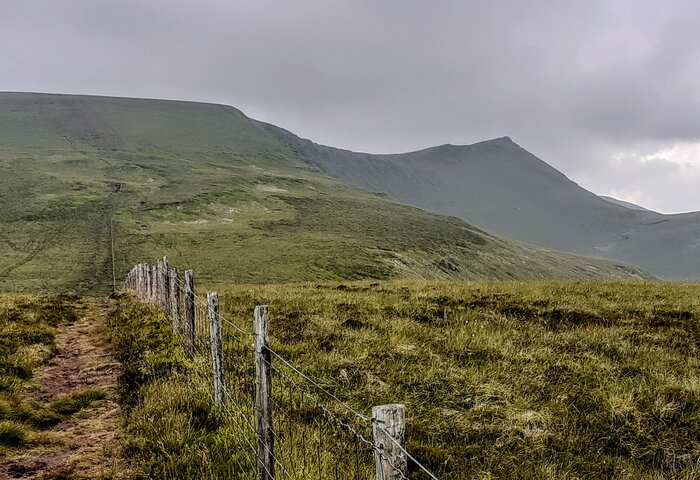 The Berwyn Ridge and Cadair Berwyn

It was a short walk up to the large cairn at the top of Moel Sych, where it was cold enough to force the fleece out of the rucksack. After a late lunch admiring the views through the haze, I packed up and set off for the short walk to Cadair Berwyn, its shapely point on the ridge a contrast to the rounded hump of Moel Sych. 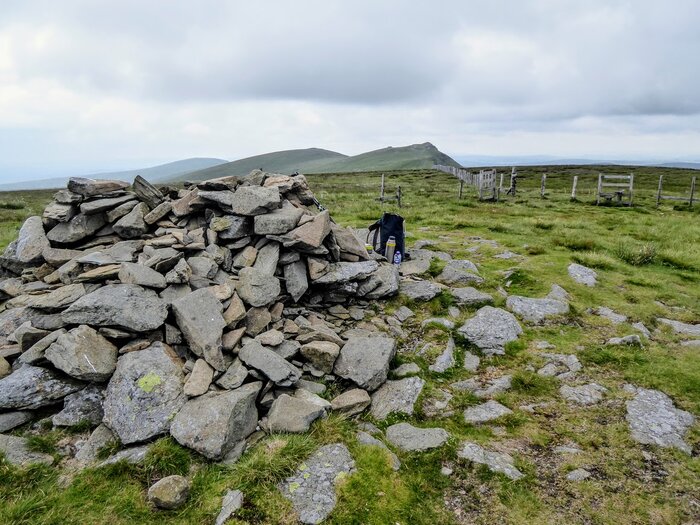 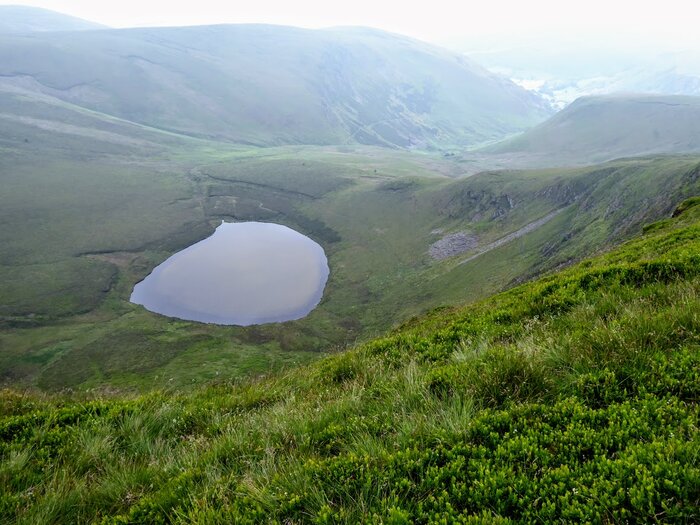 Part of the way up a stile had obviously fallen apart and not been replaced and the farmer has put barbed wire across to keep animals in. It's simple enough though to hop over the fence to the left and then hop back over a few yards further on. 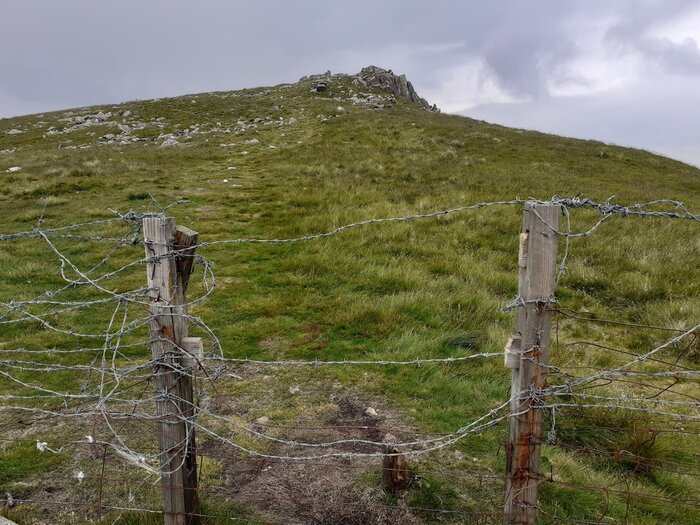 Barbed wire blocks the way, but it's easy enough to avoid 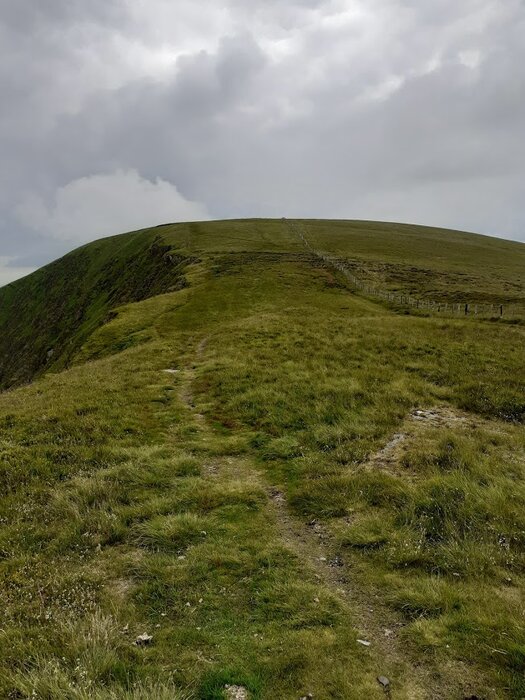 Looking back at Moel Sych

Cadair Berwyn's summit is a great place to be with views back down the valley and straight down to Llyn Lluncaws (even if the water in the lake looks unpleasantly full of some sort of brown algae). I lingered for some time before walking along the ridge to the 794m top for a look a other Berwyn tops. 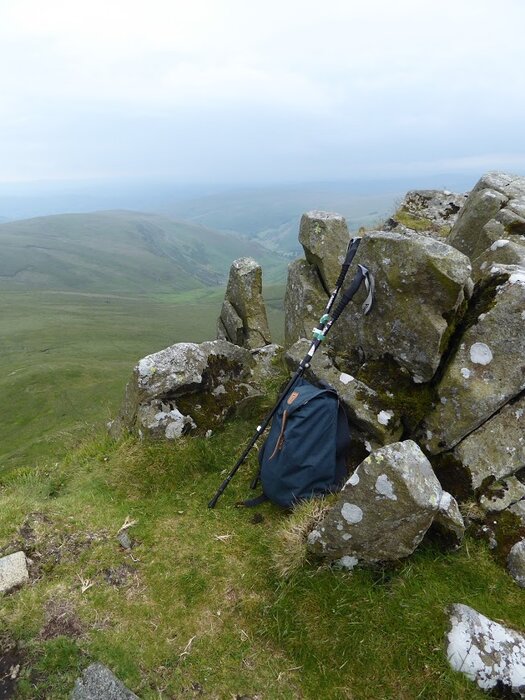 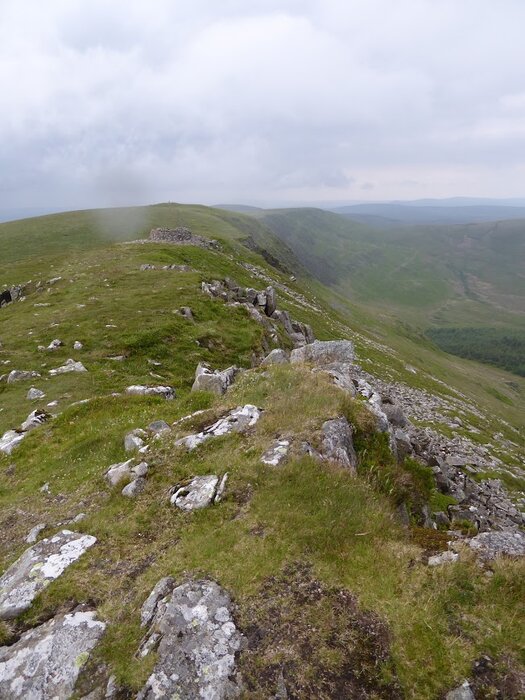 I retraced my steps to the col between Cadair Berwyn and Moel Sych, picking up the path that curls around the ridge downwards towards Llyn Lluncaws. The path is a bit loose here and there, but pretty good overall and the descent was simple enough, if a bit slow and careful, the views of the ridge and Cadair Berwyn's summit dominating all the way. 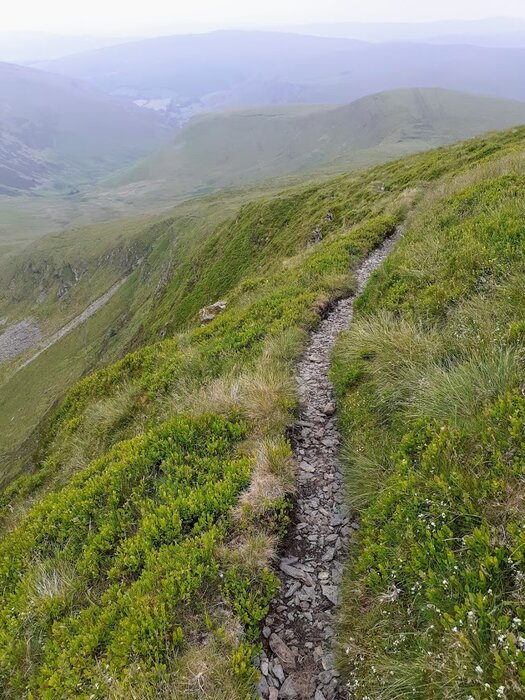 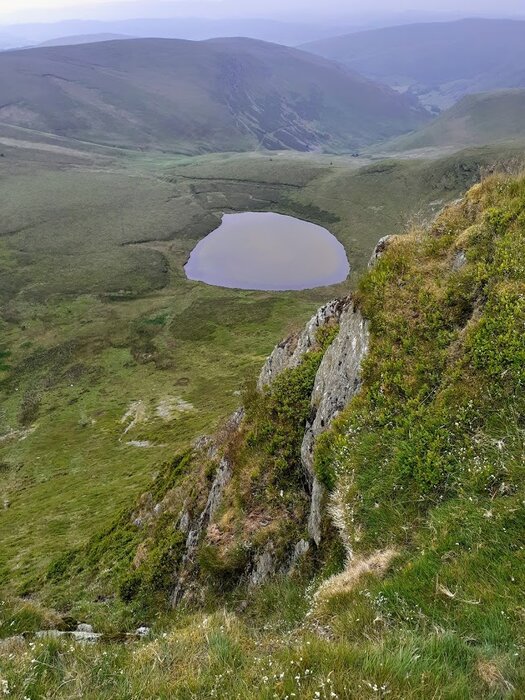 Great views straight down to the lake 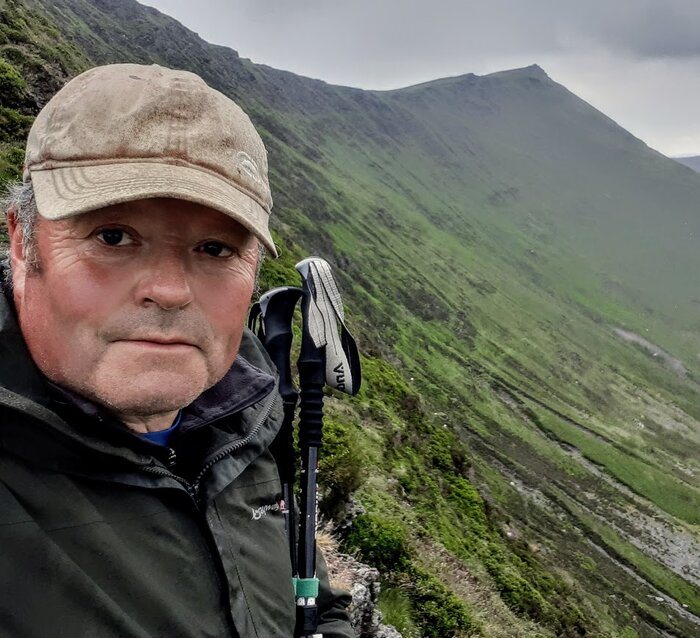 Me and Cadair Berwyn

I bit of drizzly weather blew in as I neared the lake, but it soon moved on as the path turned away, heading back in the direction of the waterfall. There is a stream to be crossed, but I managed easily enough, and that is followed by some seriously boggy ground for about 20m before regaining the path/track which ambles quietly down the valley, eventually coming out on the road a few hundred metres below the lay-bys.

This was a superb afternoon out in very underrated hills and after getting away from the crowds at the waterfall I saw only three other people - terrific. 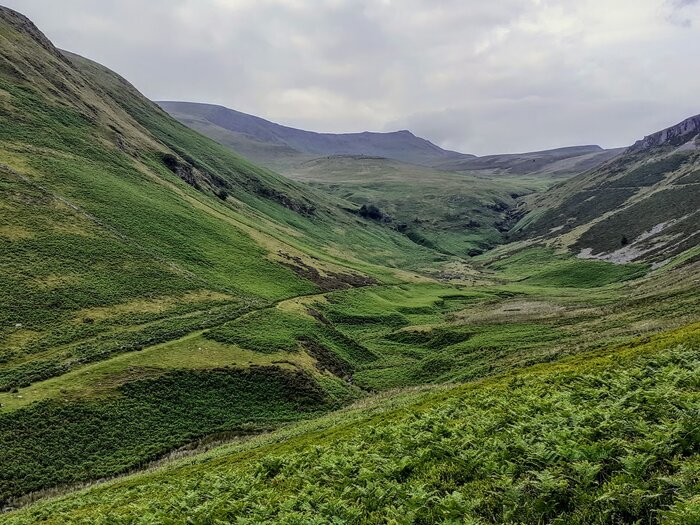 Looking back to Cadair Berwyn on the way down


Short stroll in the heart of Wales

Broad Law - up, down and back to town