Drafted on 18 Dec 2021 07_41_53.gpx Open full screen  NB: Walkhighlands is not responsible for the accuracy of gpx files in users posts

I was spending the weekend in Glencoe with my wife and and although she's not a hillwalker, my gear was packed just in case.
On arrival on Friday night, I checked the weather forecast for the weekend. I knew it was going to be dry and a heavy fog was hanging around..
Checked MWIS who predicted inversion conditions. So my mind was made up to go out, just to pick a hill to climb. A quick look at Walkhighlands and I realised I was close to the Duror route up Fraochaidh. A rather large hotel breakfast and I was on my way soon after the late sunset. The walk begins in the small settling and there's plenty of parking options. The start of the path follows the route to Oban then turns off left at the Appin Murder information board. Immediately its quite a steep walk up a forestry road. And this goes on for a while, occasionally leveling out until about 400 metres where you leave the trees behind. The last section of this path is really steep and quite slippy on the slate strewn path. All the while I was walking in the fog. Until I emerged from the forestry and saw a huge golden mountain to the left of me glowing from the sun still hiding behind the mass still to climb. I then turned around to see that I was now above a sea of cloud covering Loch Linnhe and everything else north and west of me.

A path continues for a short distance before I was following some 4x4 tracks and then eventually you just have to find your own way. Once I reached the lochans, one of which was practically just bog, I headed over towards the North west ridge line to get a look down at the fog filled glen below.
I had only just saw my first real Inversion a few weeks ago on an afternoon climb on Ben Donich but this was something else. The peaks of Glencoe were basking in the early sunshine and the fog hovering below was magical.
I tried to plot a route up the ridge but it was steep and heathery so I headed back inside and just zigzagged my way up stopping every 5 minutes for a photo and to catch my breath. Sgorr Dhearg reflecting in the lochan

The higher I got the further out west I could see with the island of Rum(I think) nestled between the gaps in the Ardgour hills and the Cuillin ridge just visible behind the Knoydart hills. All wrapped up in cotton wool.

When I reached about 700 meters I eventually had the bright sun on my face and there was a bit of a breeze now that I was away from the sheltered slope. This just opened up more views though. And I could play with my shadow. Shadow on the fog Shadow on the hill

A couple of different paths started to appear as I neared the summit and I followed one of these up, glad to be out of the heather tussocks. Although it wasn't a boggy climb it was quite tiring.
The summit cairn made of old Iron fence posts basked in the mid day sun on the edge of the mountain. The fog was retreating the the Glen below but was still nestled in Salachan Glen. 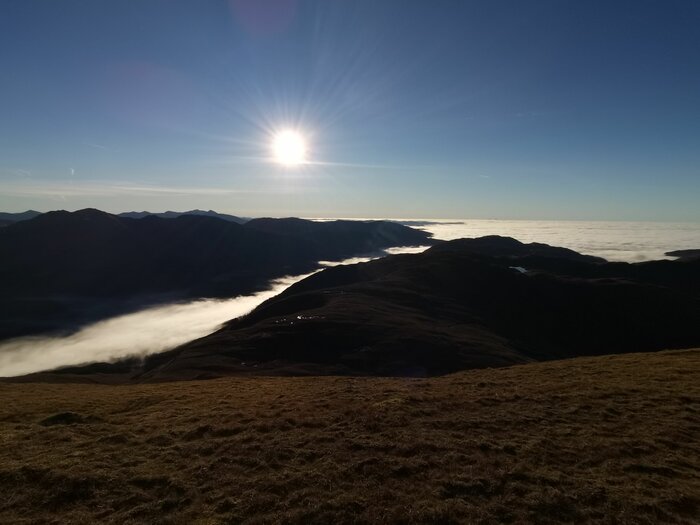 I sat at the summit for ten to fifteen minutes just taking it all in. Stunning views all around and not a soul to be seen. I knew the hills around would be alive with inversion seekers and it was hard to have to leave. But I can imagine Leianne wouldn't be too chuffed if I didn't appear for lunch. So I took a few snaps and headed back the way I came, with a wee jog now and again to make up for my doddling ascent. Glencoe and more behind me

A truly wonderful day that will live long in the memory. 
Wet walk with a happy ending

To the end of the World!