Summer had forsaken the fells around Mardale.


High St to Harter Fell.gpx Open full screen  NB: Walkhighlands is not responsible for the accuracy of gpx files in users posts

It had rained on Wednesday, also Wednesday night so it didn’t bode too well for our walk on Thursday that was to start at Mardale Head and take us up onto High Street and Harter Fell by way of the low level path from Mardale Head to Caspel Gate that sits between Rough Crag and Long Stile. E and Martin had never used this way of ascent before but I have used it on a few occasions, both ways, and know how wet it can be by this route. The last time that I had used it after dropping off Piot Crag to Blea Water the path was pretty well goosed in places where the use of a quad bike or similar machine used either by a shepherd, NT or Utilities operative had collapsed the path making it even wetter and boggier than it used to be. So feet, stand by for a wet one early on.

It had also been a cold night with the temperature down to 5.5°c and it wasn’t much warmer as we arrived at Mardale Head at 9:15am to find the clouds down over the fell tops and the car parking spaces nearly all occupied and had we been a few minutes later would have lost the remaining spot that we did manage to get into. There were a couple of mobile homes parked up and plenty of other walkers streaming off in all directions but was pleased to see not the one that we had chosen for today’s start.

We were soon ready to walk so off we set to leave the car park by the large gate that leads onto Gatescarth Pass to then turn to the northwest and follow the wall along to the footbridge across Mardale Beck but before we reached that point we had a decent view up to Piot Crag and Mardale Waters. 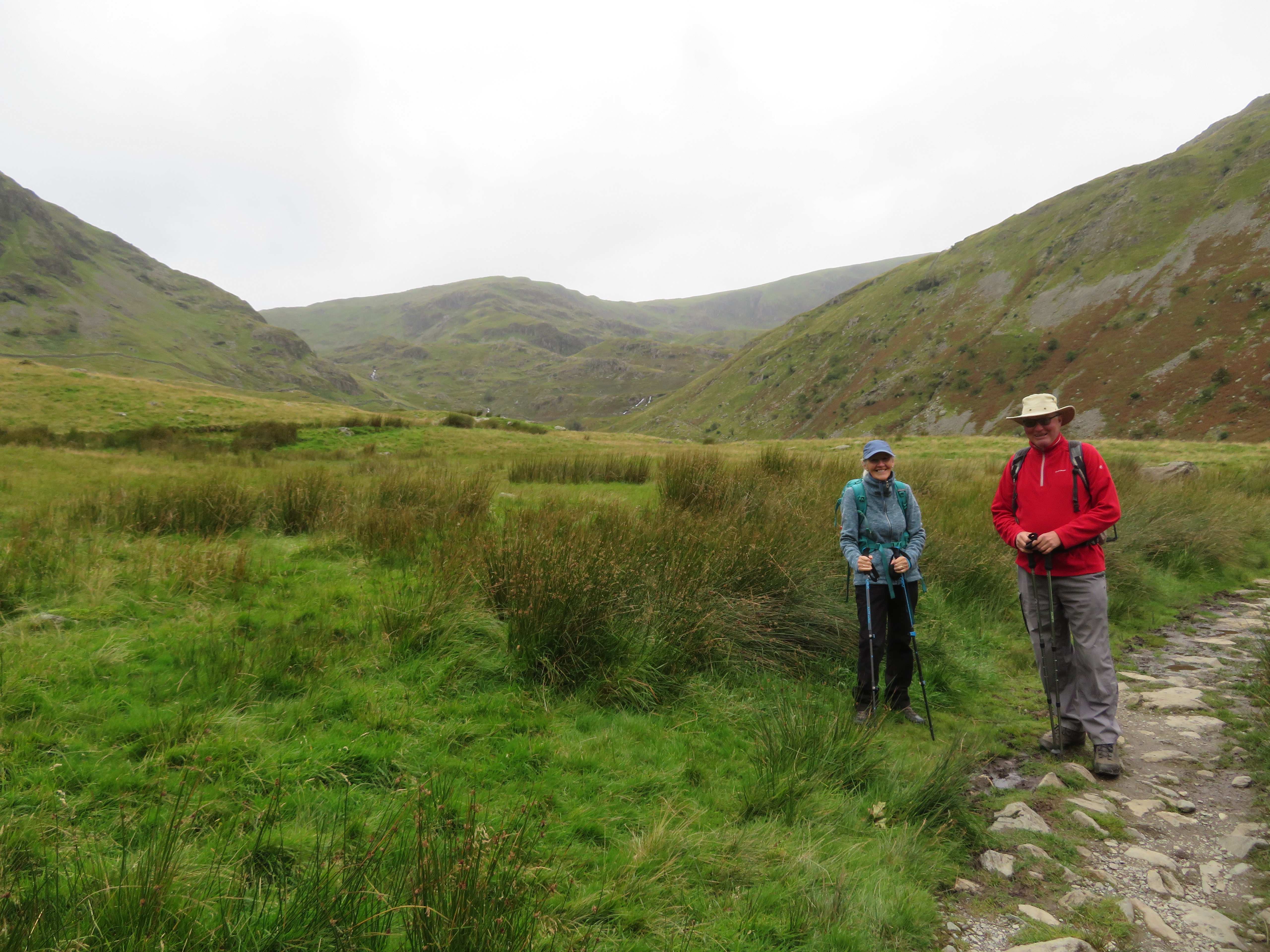 Halfway along the path I took a shot of the calm waters at Mardale Head. 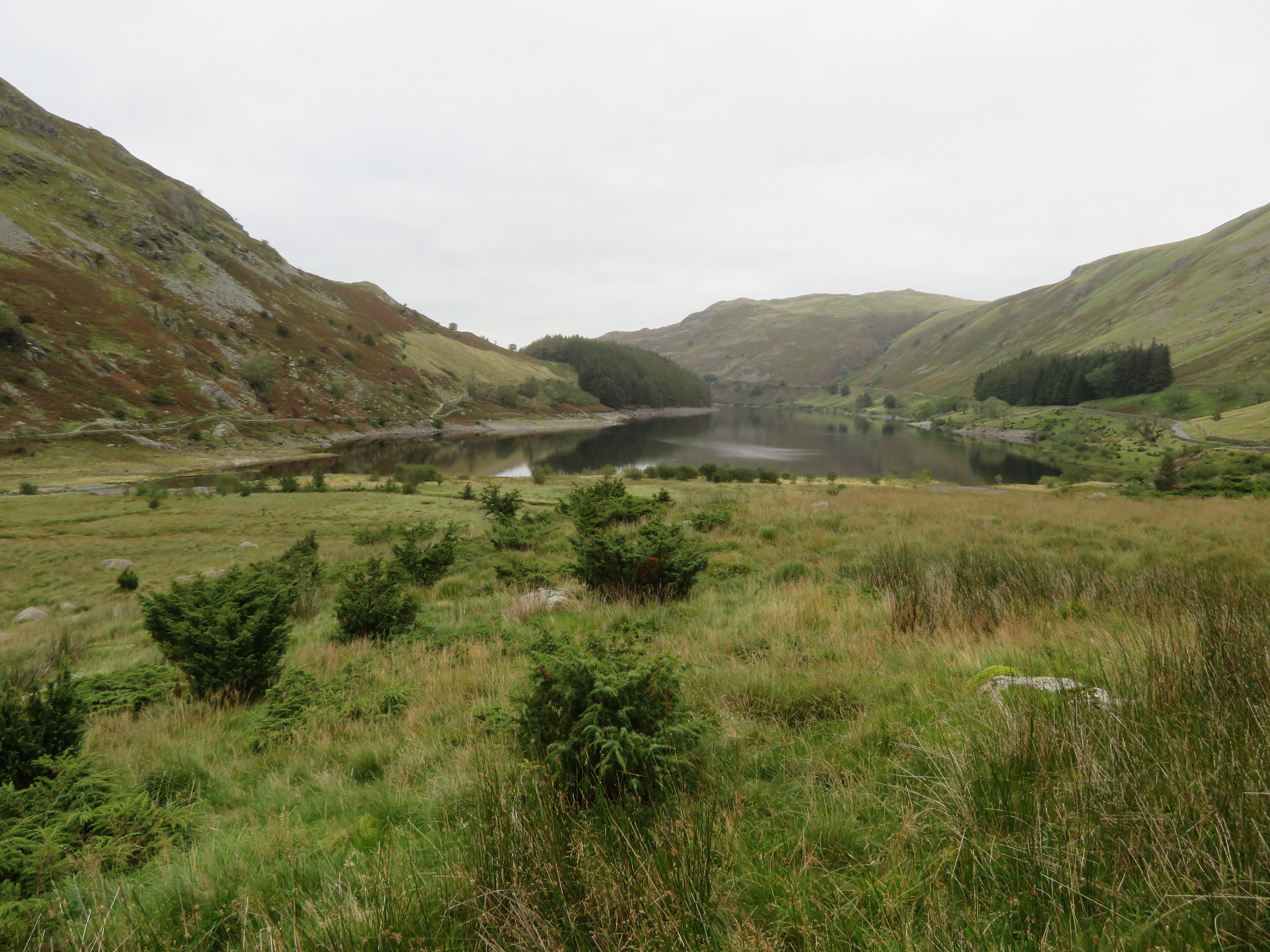 There was a dampness to the air and the quality was not too good with that very fine moisture content that is neither light drizzle nor cloud vapour although that was evident enough as we looked up beyond the north face of Harter Fell. 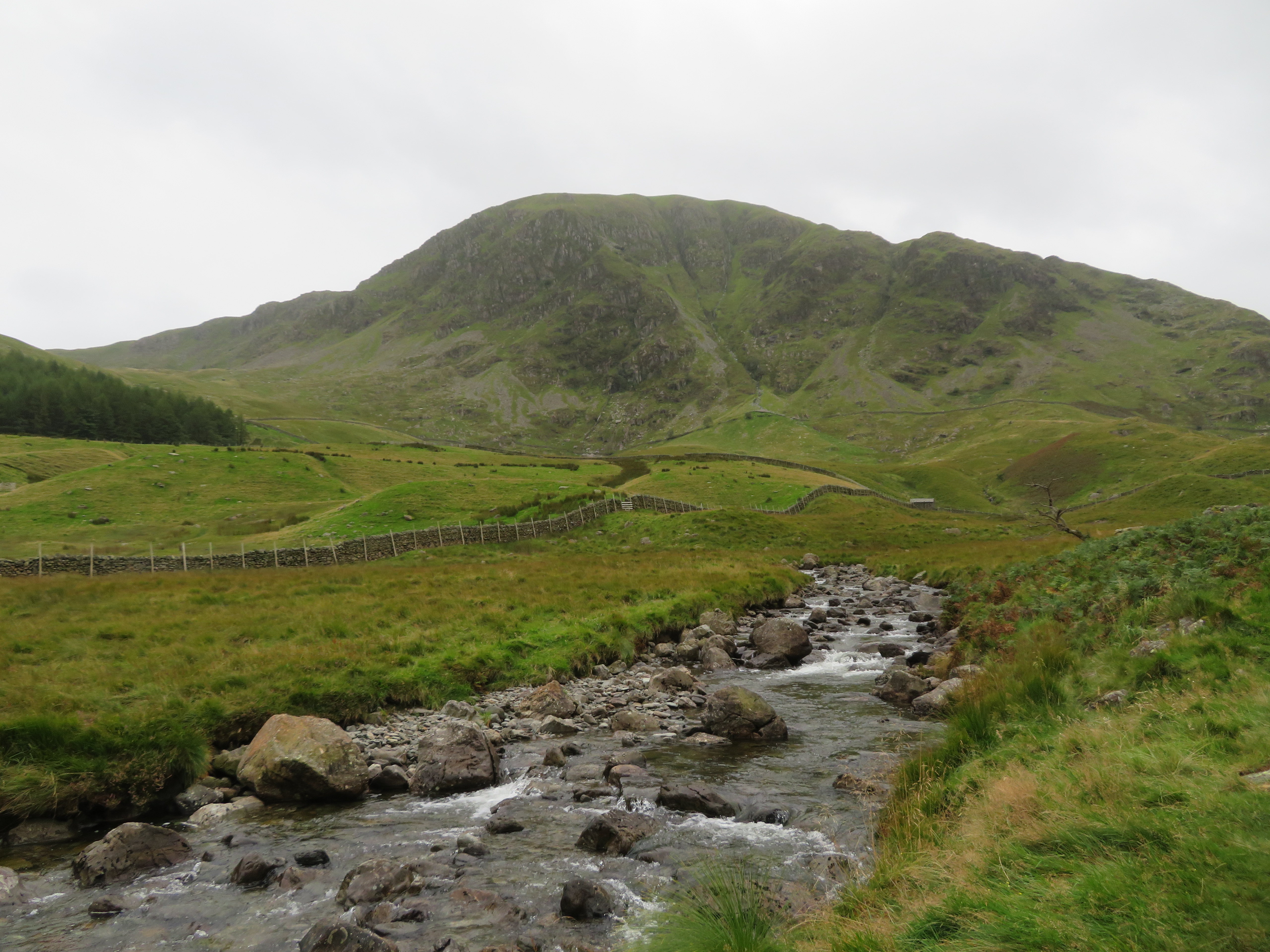 We had seen a couple of walkers heading along the shoreline path towards The Rigg but now we were on our own as we approached the footbridge over Mardale Beck to pick up the path that follows the course of it to where it morphs into Blea Water Beck. This section of path is in good condition and we made good time as the view of Mardale Waters and Piot Crag unfolded before us. 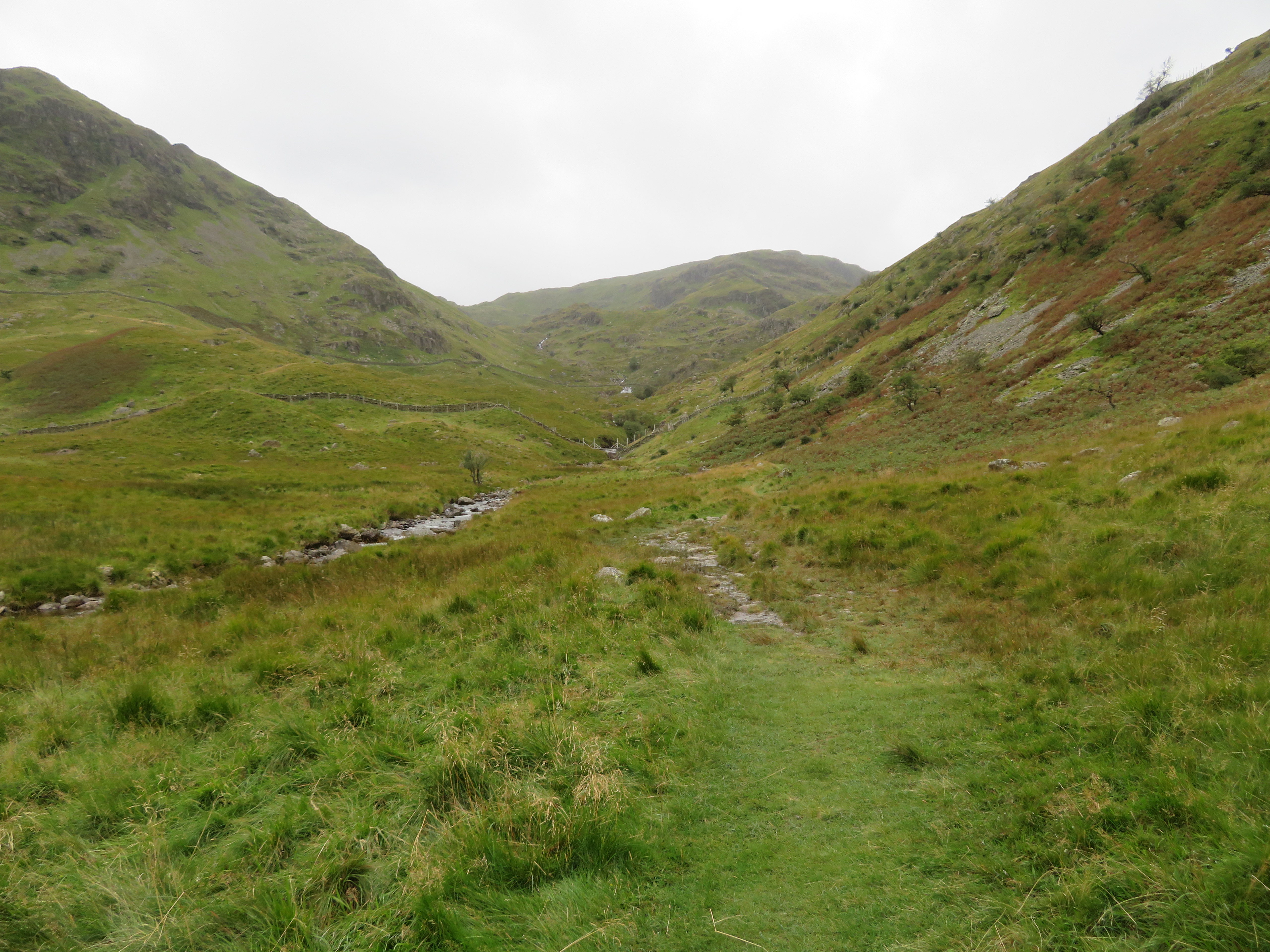 Start of the path to Blea Water

A quick 5 minutes walking found us passing an old concrete weir on Mardale Beck along with a – looking at the posts - recently built deer fence, recently could mean in the last 4 or 5 years. 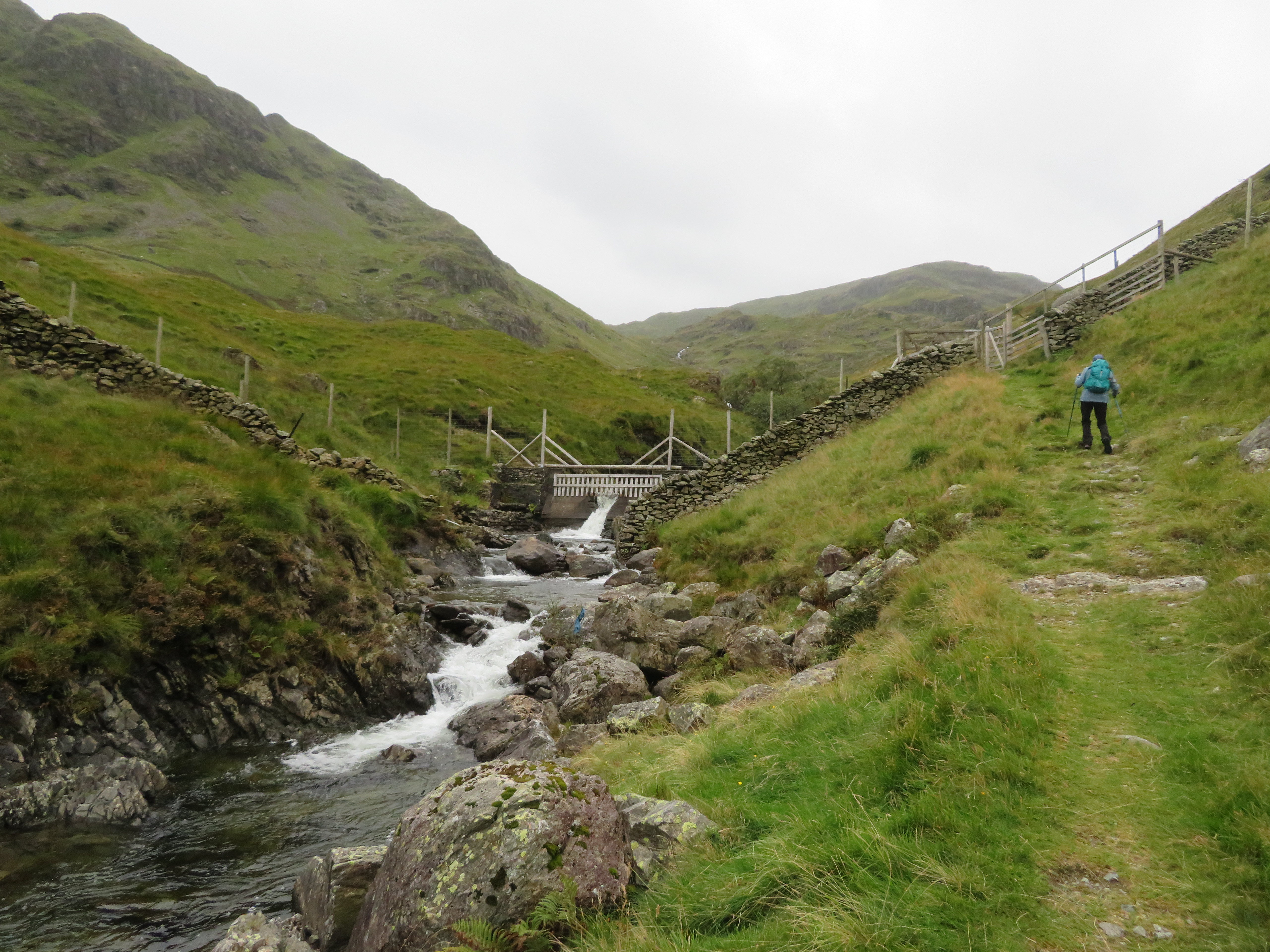 Another quick spurt due to the cold breeze that was blowing saw looking across to Mardale Waters an area of ground that is well named by the amount of waterways carrying their loads down into Haweswater. 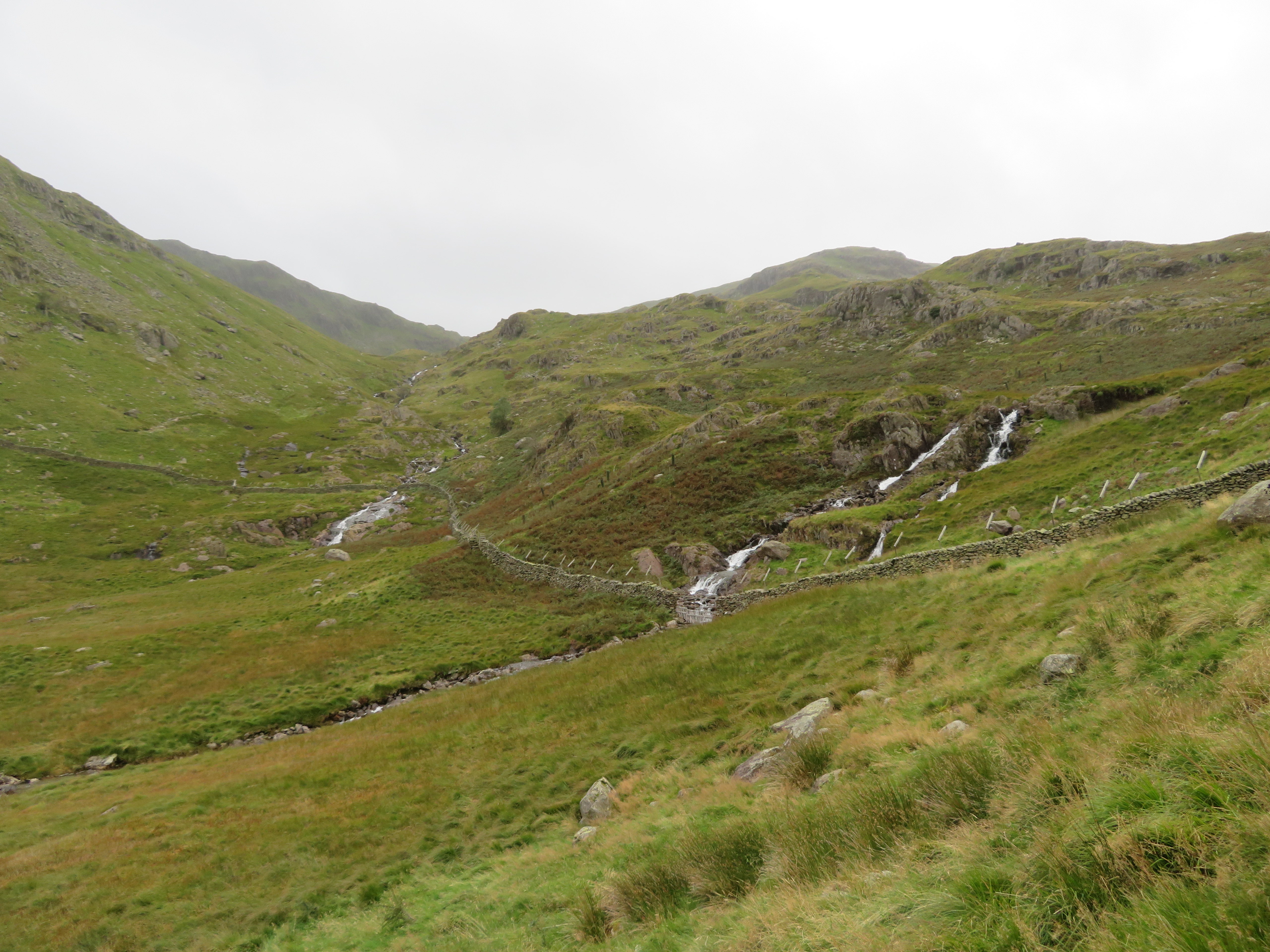 Looking over to Mardale Waters

We were by now following Blea Water Beck with the lower slopes of Piot Crag in full view with a hint of Nan Bield over to the left but it was quite hazy in a damp way so small details were hard to pick out. 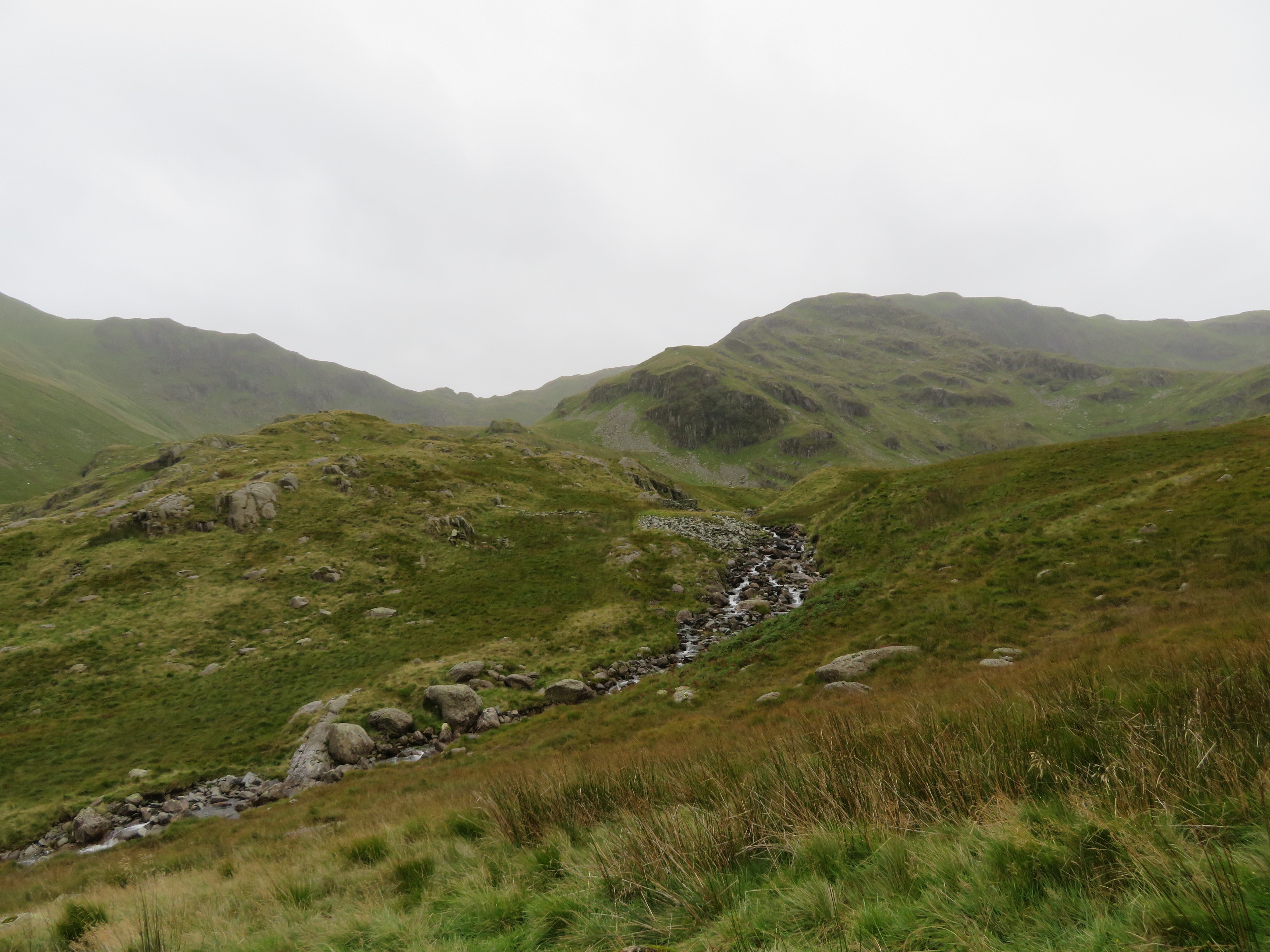 There was plenty of water about in the becks with many white flashes of water as it bubbled over the rocks and down small cascades. It was just about this point – 380 metres – that the ground turned very wet indeed and I noticed that some of the worst of the previously damaged areas had been made good with pitched stone or levelled out with hardcore. In some places the path disappeared due to the wetness of the ground. 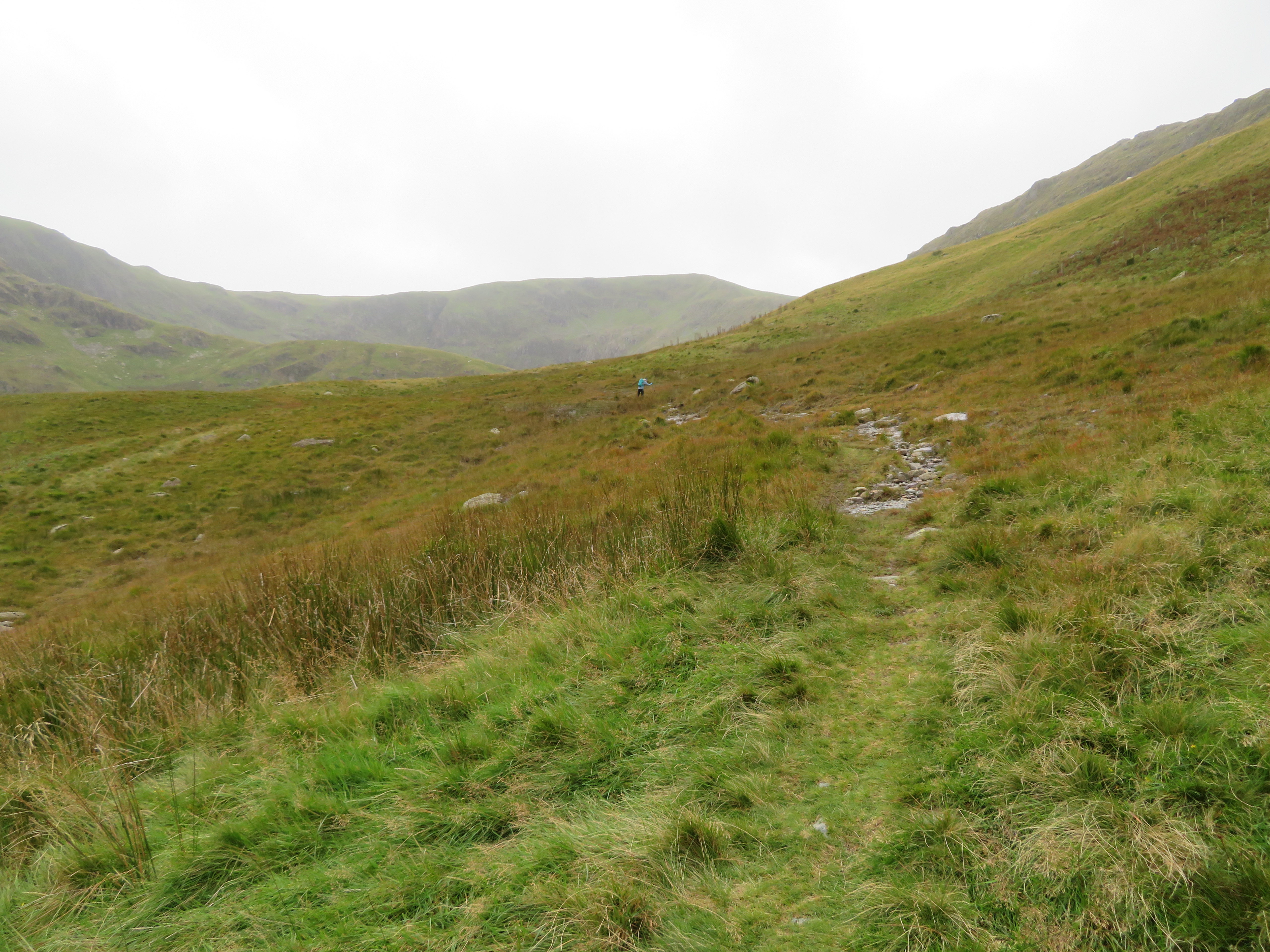 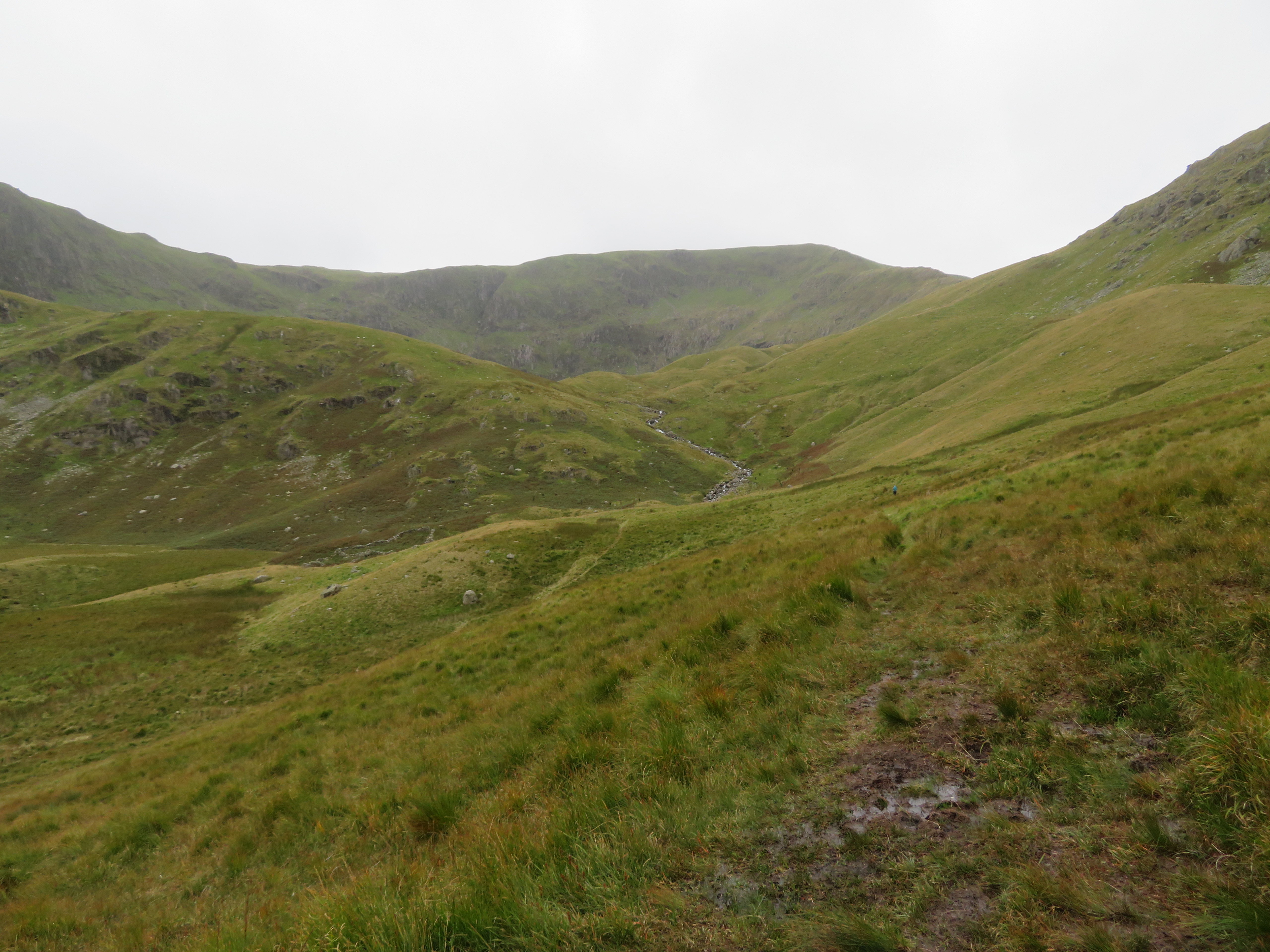 and then the path dropped down towards the beck before taking the final climb up to the Blea Water that old established dam formed by the United Utilities of old that helps to feed the voracious water consumption of Manchester and surrounding towns. In 1948 Blea Water that was glacially excavated was found to be 63 metres – 206 feet – deep and lies at the 488 point and was once known as Bley Water that derives from the Old Norse language that means dark blue although today it looks a deep shade of black.

We had a good view of the lower end of Piot Crag as we started our climb out from the beck, a part of the crags where quarrying kept people busy back in the day. 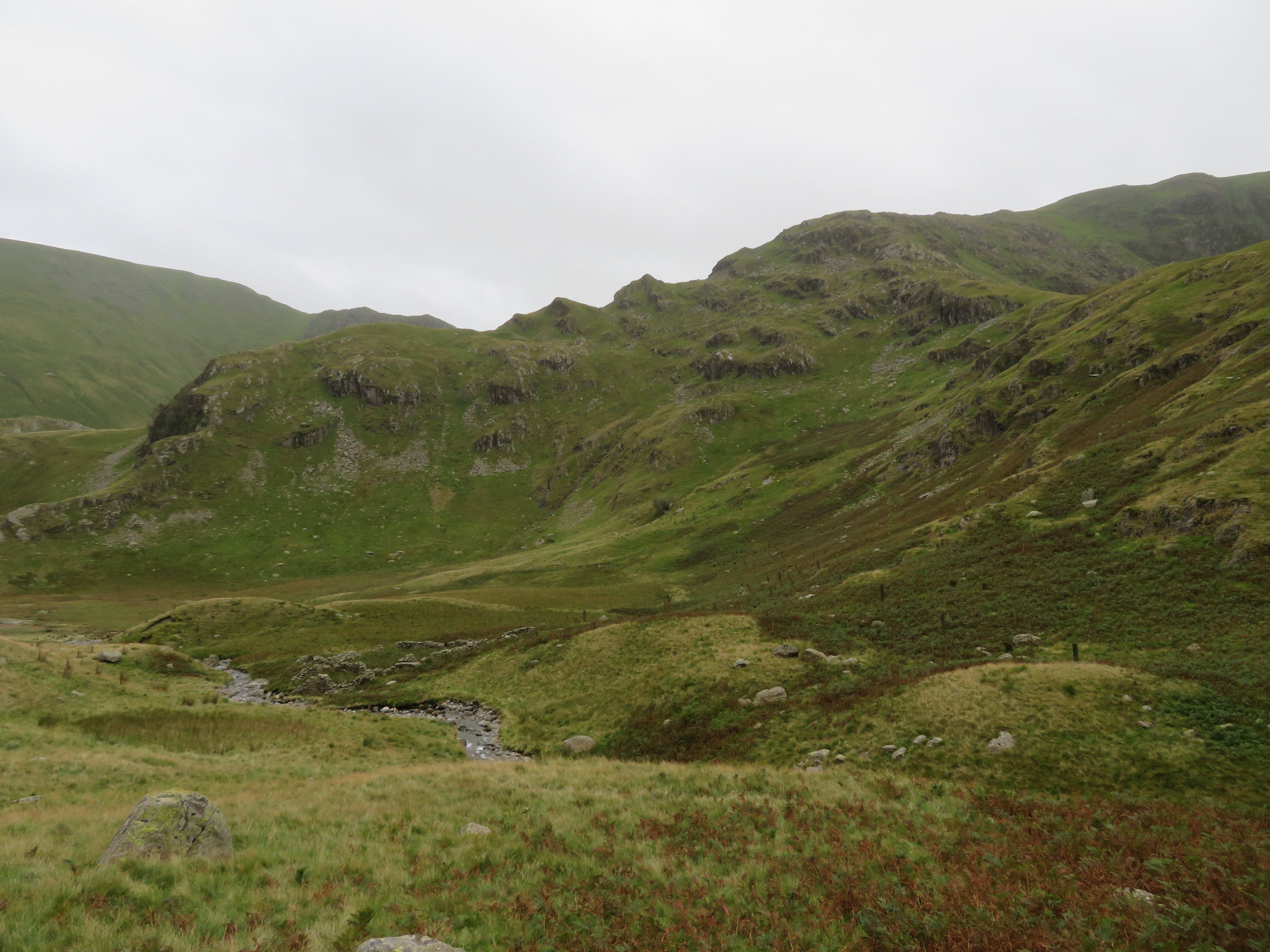 The foot of Piot Crag

Turning round and there was a decent but hazy view back to Gatescarth Pass with Branstree looming large and rounded behind it and Small Water Crag just to the right. 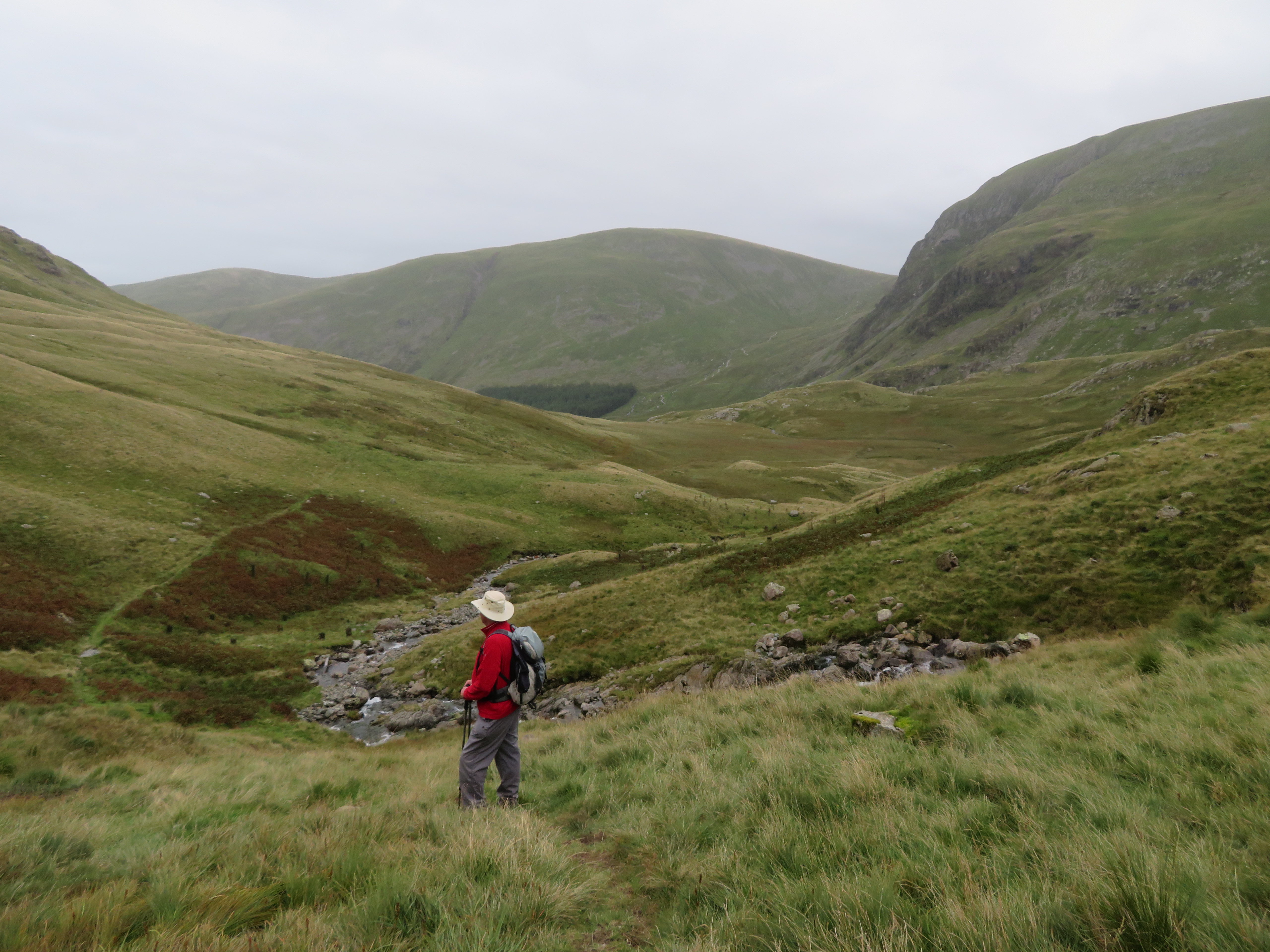 E had raced ahead as per usual and was waiting for us to arrive and join her for a quick drink and short break before climbing on to the low area of ridge that holds the unusually named tarn of Caspel Gate that sits between Rough Crag and Long Stile.

The dam wall is not very high, just enough to push up the water level of Blea Water by a metre or so and when we arrived there we found a small pile of rusting gabion baskets. The great curve of the Blea Water Crags encircle the tarn and run steeply right down to the water giving no opportunity for a walk around the perimeter of it. Bley Water – blue water – it didn’t look remotely like anything blue today as we tried to peer into the black depths but only seeing the water covered rocks that had tumbled in close to the side from the crags above. 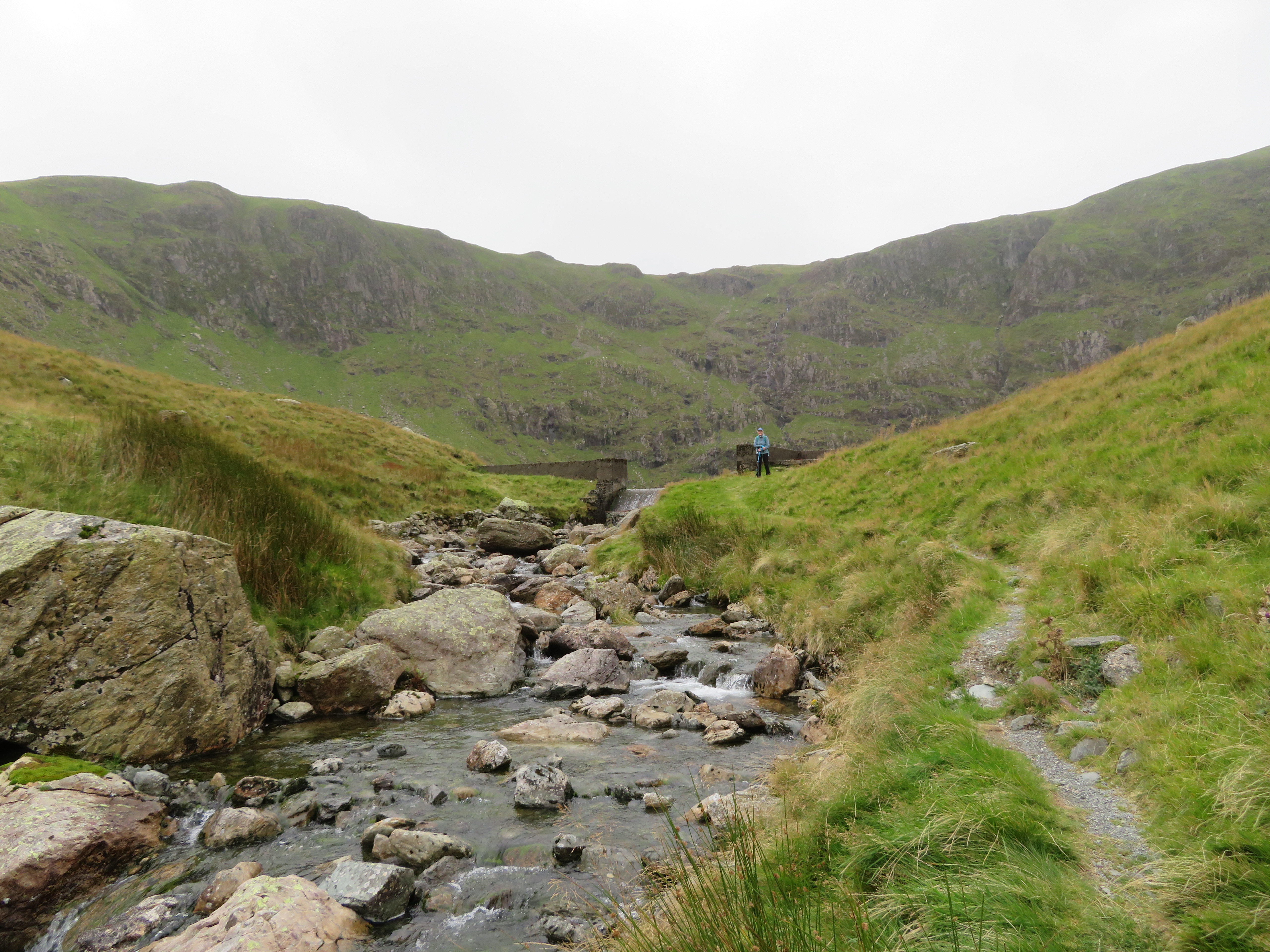 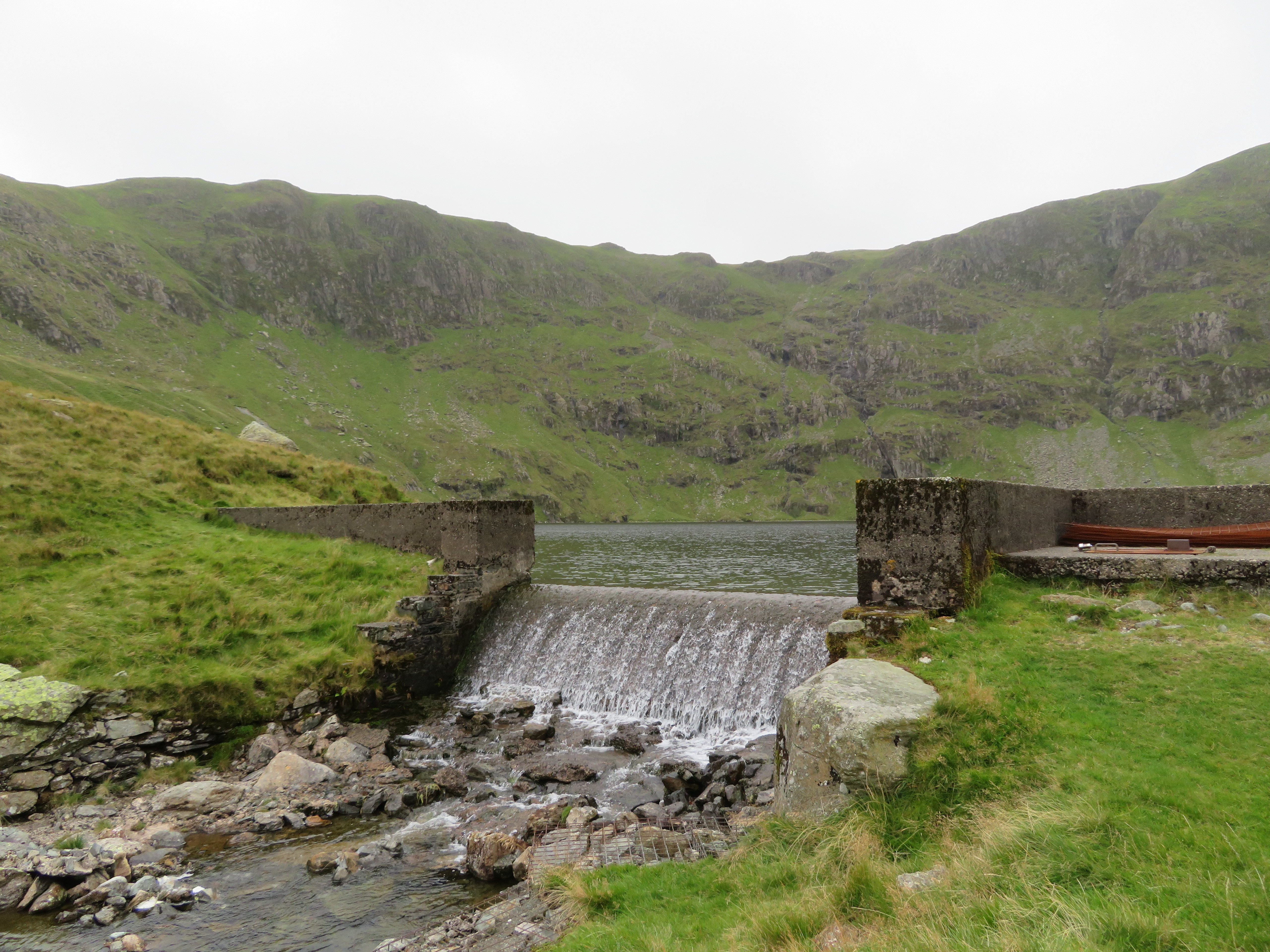 It was lovely and peaceful looking over the landscape before us with only the sounds of the tumbling waters in the beck to mar the silence that would have been complete without it. But it was feeling colder, probably because we’d stopped, so break over and leaving the tarn behind we took that last climb that would see us on the ridge proper. 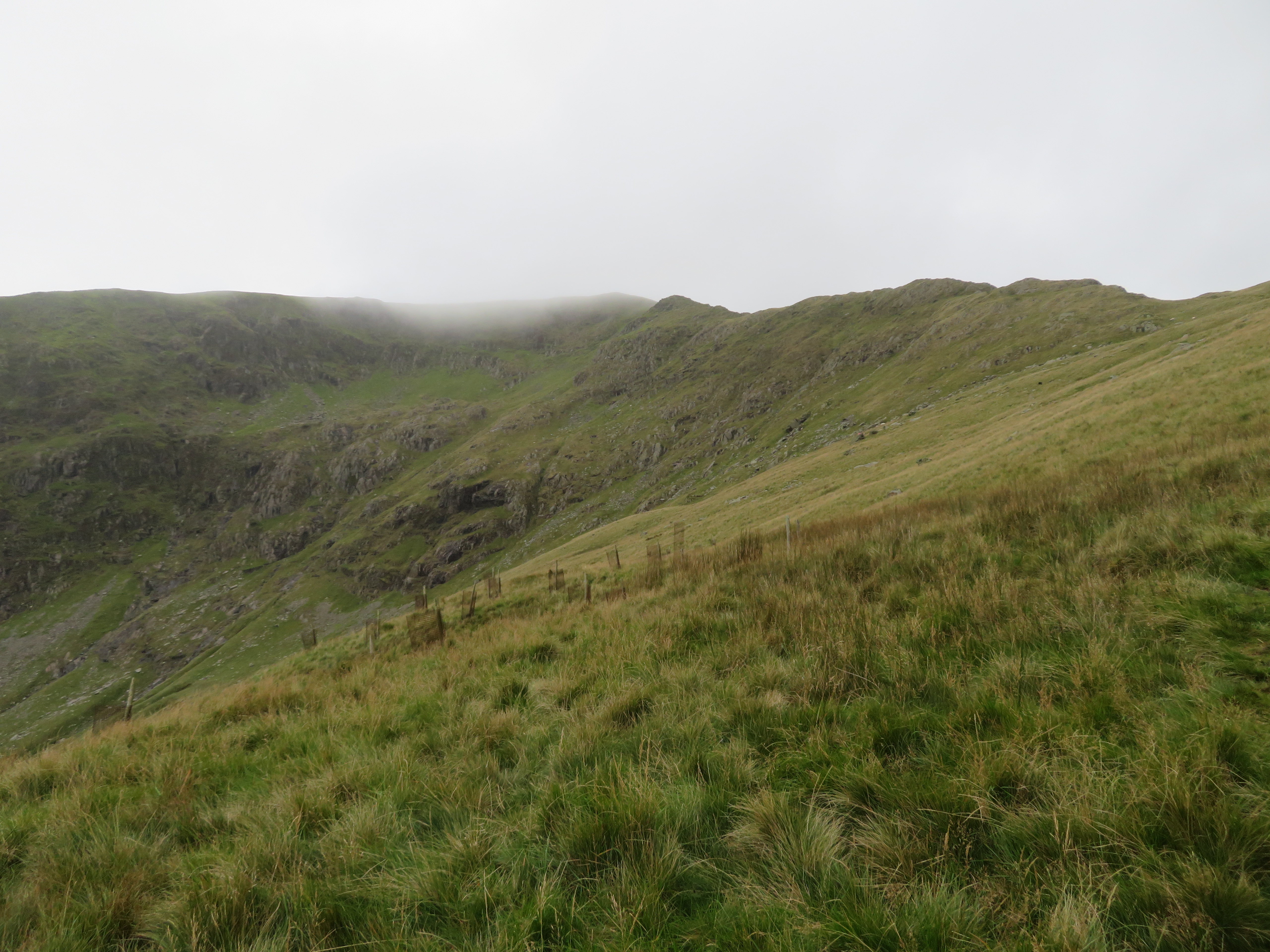 From the 660 point we had a great view of the tarn. 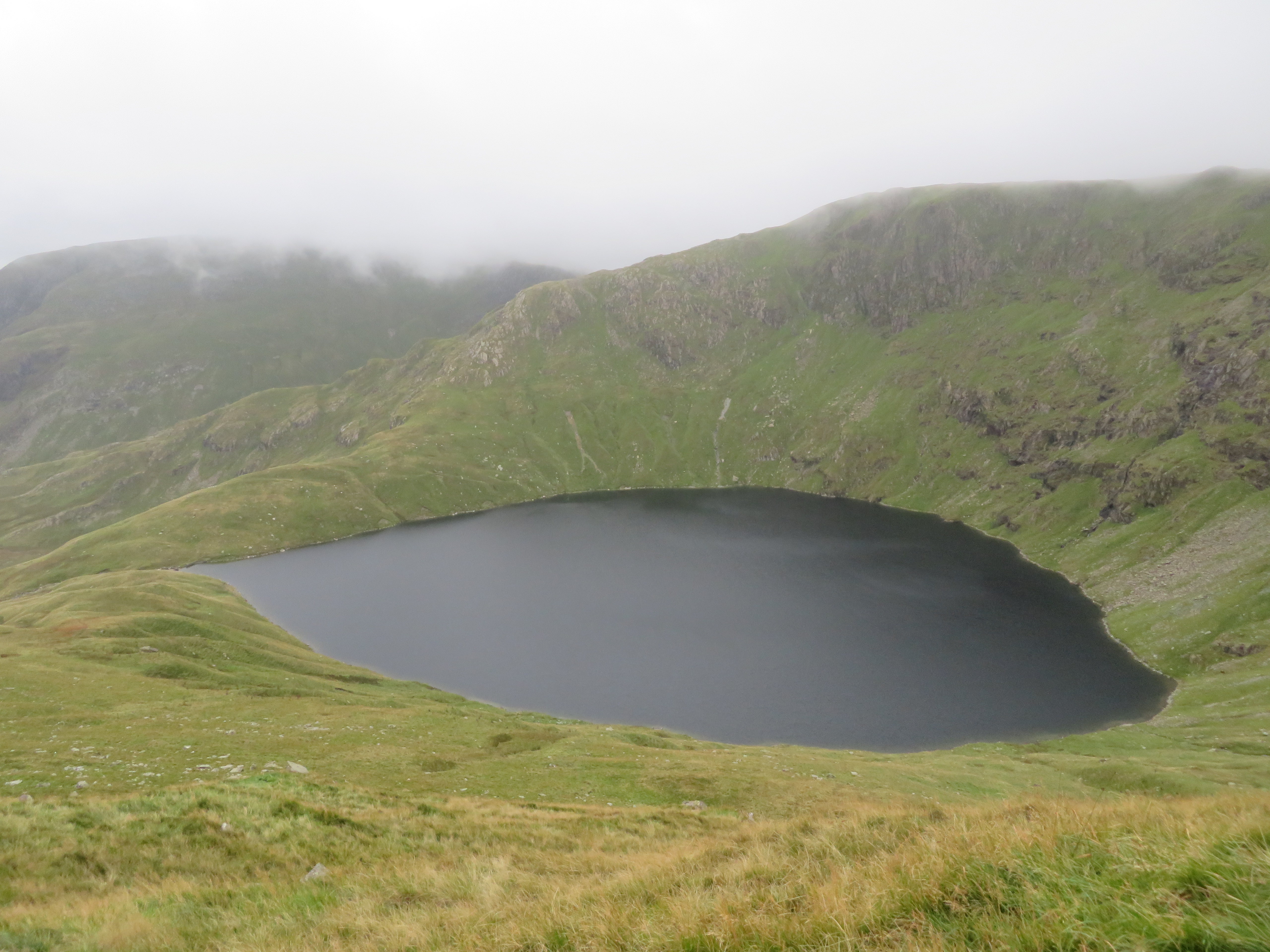 We arrived a few metres to the west of Caspel Gate from where we had a good view along the ridge towards Rough Crag and Caspel Gate. 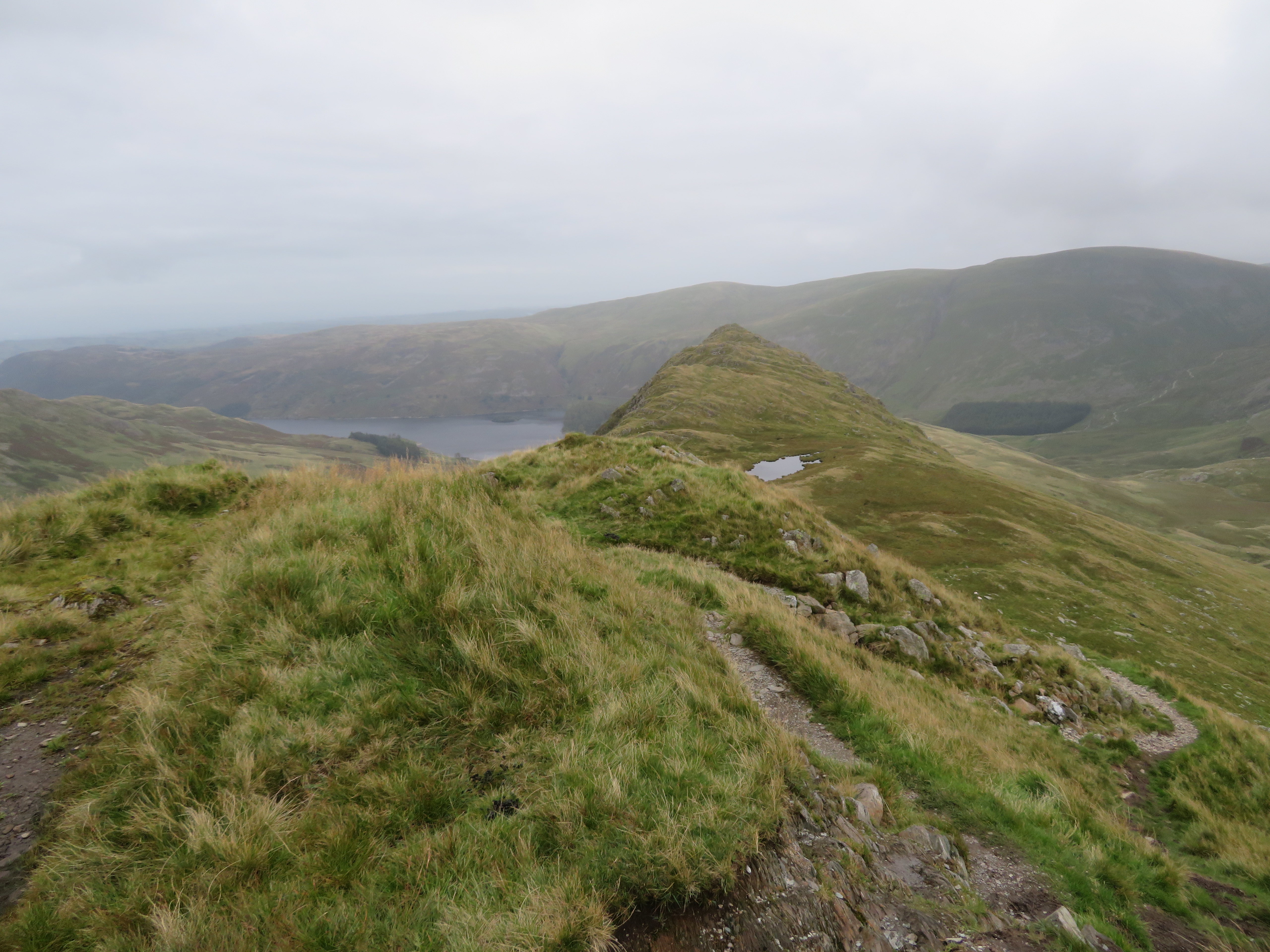 Looking down Long Stile to Rough Crag and Caspel Gate

From this point it is a tad steeper with a few areas of mild scrambling and a bit of exposure into Riggindale at one point but nothing to get excited about. The path has been upgraded from what had become a rough and loose one in places so is much better than it was a couple or so years ago. It’s a big improvement. As we got higher up the ridge we moved into the cloud cover that made it colder and even damper than before. About a half hour was needed to help E along the worst bits before we reached the trig column on High Street where we threw ourselves behind the wall for a welcome respite from the cold wind that was now with us. It was so cold in fact that we put our coats and gloves on before leaving the wall and continuing on to Mardale Ill Bell. Welcome to winter LD style.

Now that we were on High Street we started to see a lot of other walkers plus one mountain biker, some that shared the luxury of the wall with us but after another quick break we set off for the lower top of Mardale Ill Bell and a traipse along to Nan Bield before the start of the climb up to Harter Fell summit. As we walked on the views opened up through the cloud but only we were descending to Nan Bield did the views look anything like alright although the cloud was low over Haweswater at this time of day. 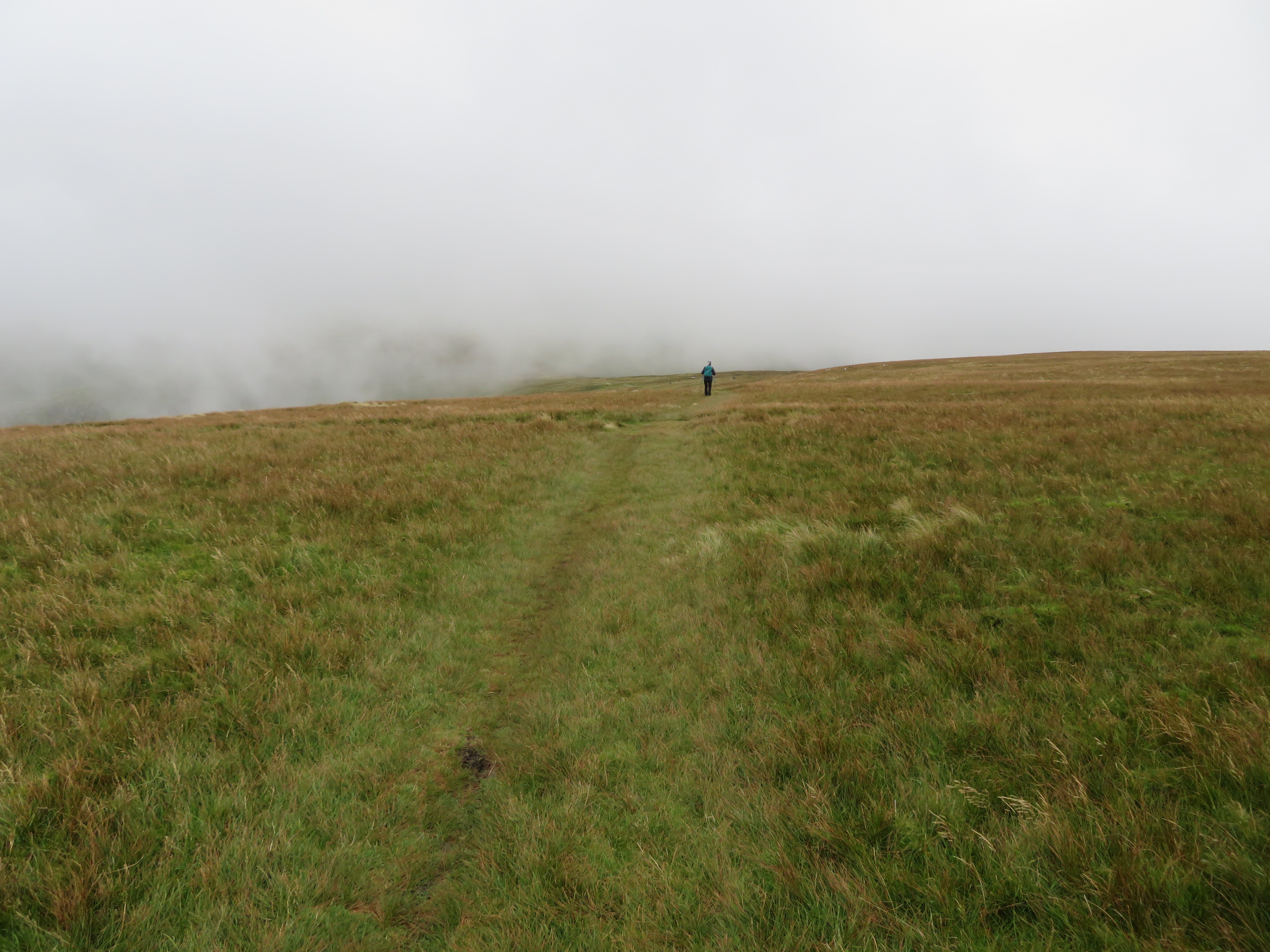 On the way to Mardale Ill Bell 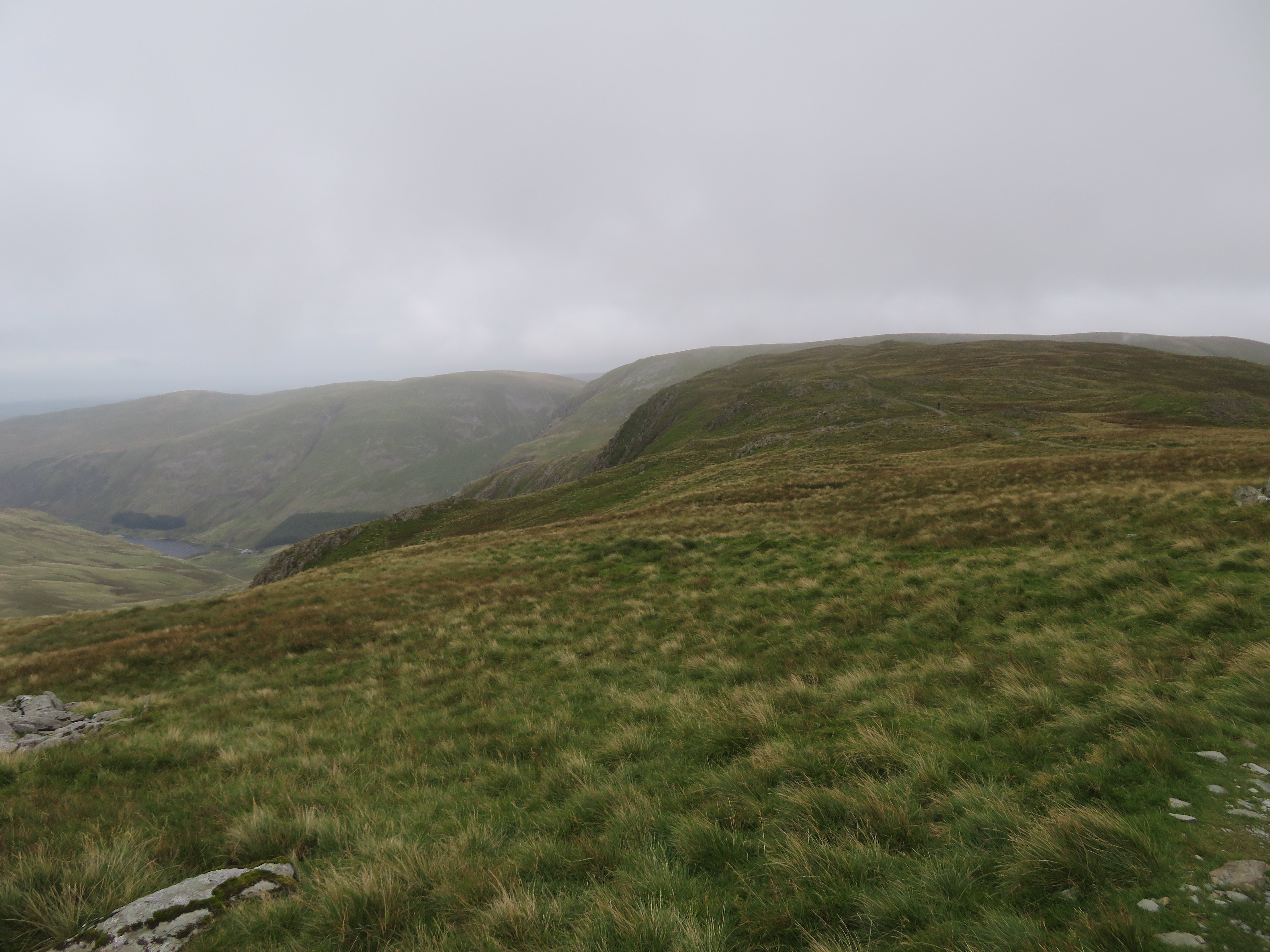 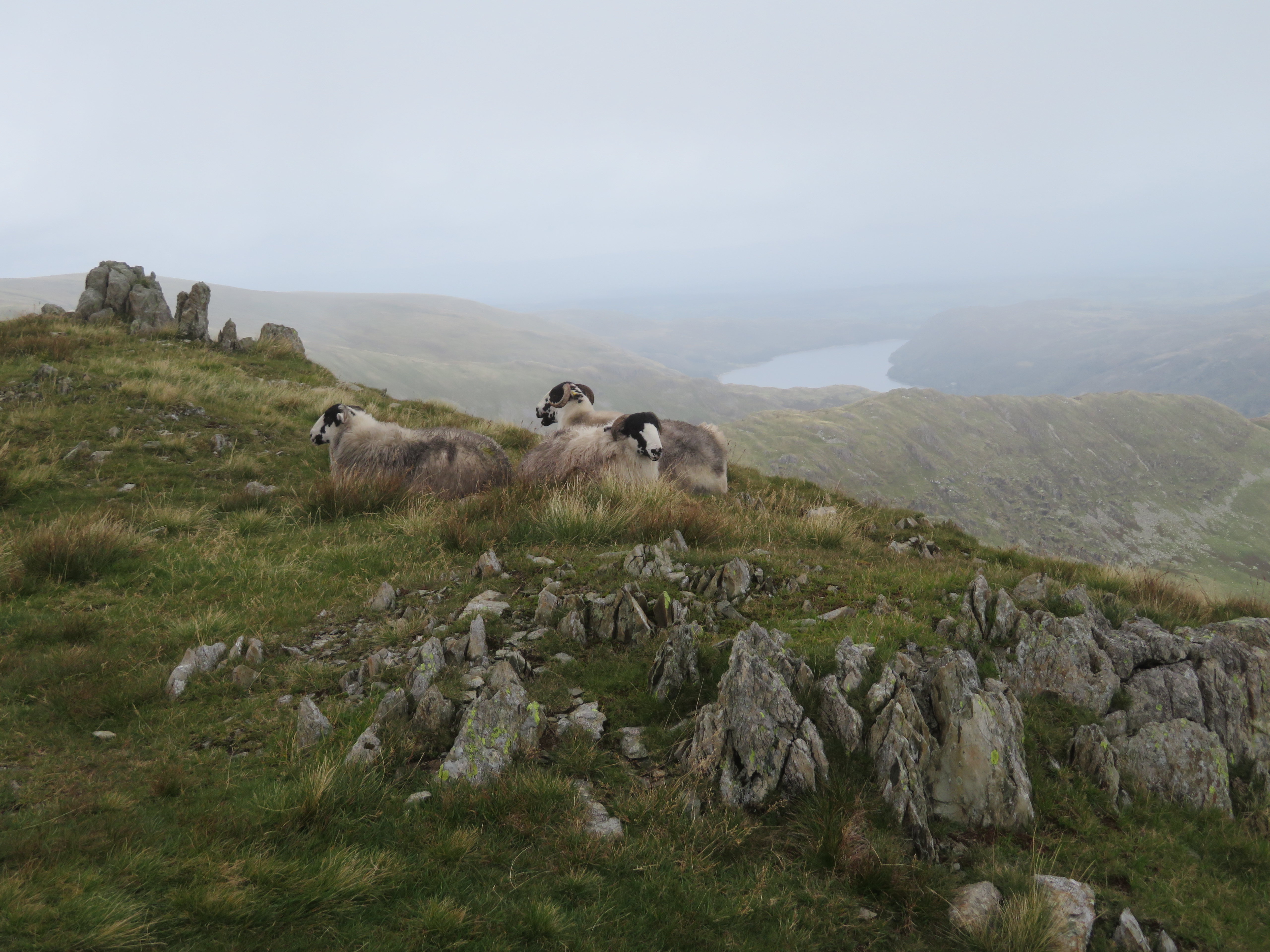 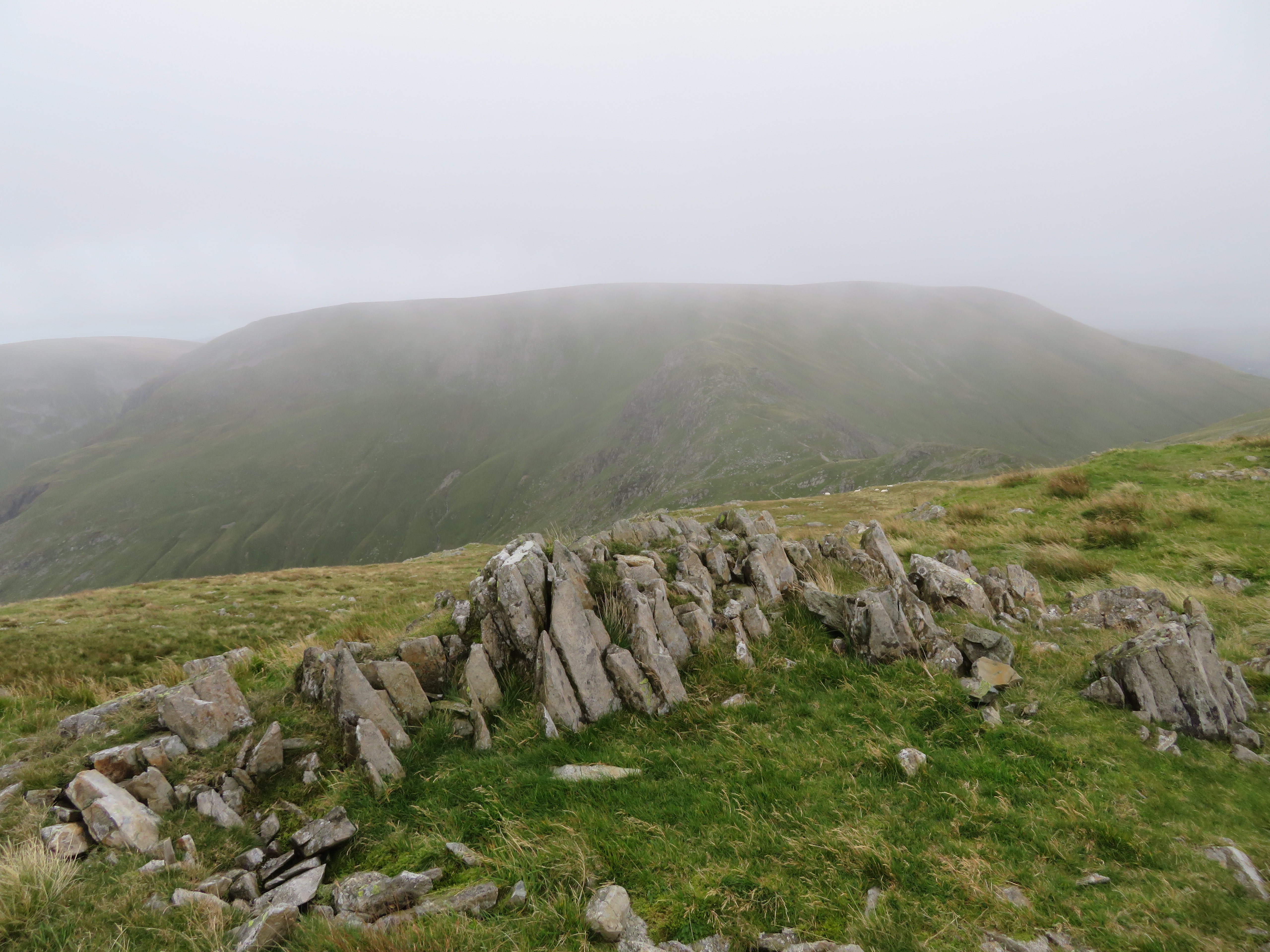 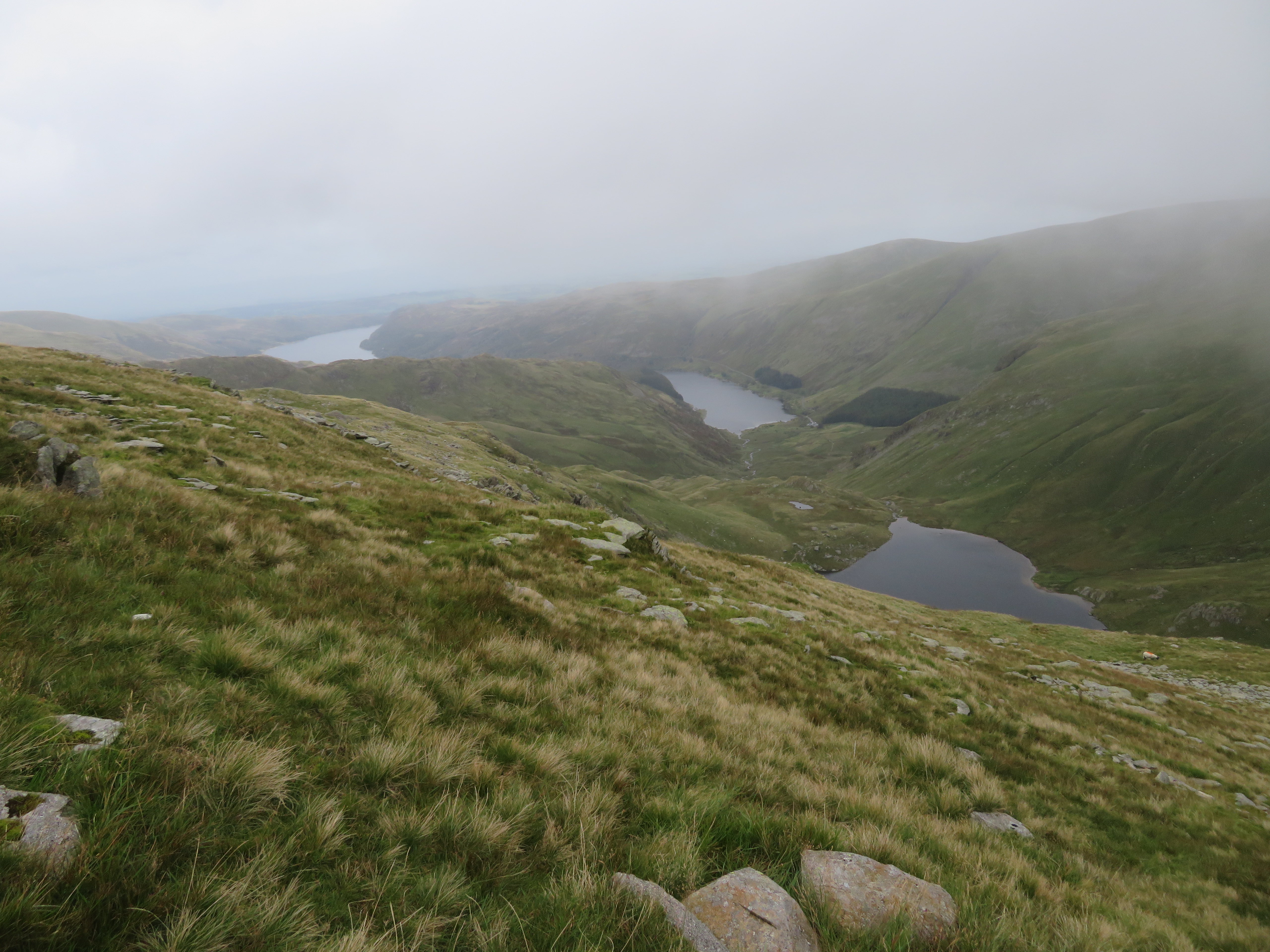 The low cloud offering didn’t bode too well for our climb up to the top of Harter Fell but it’s in the plan so there we shall go. 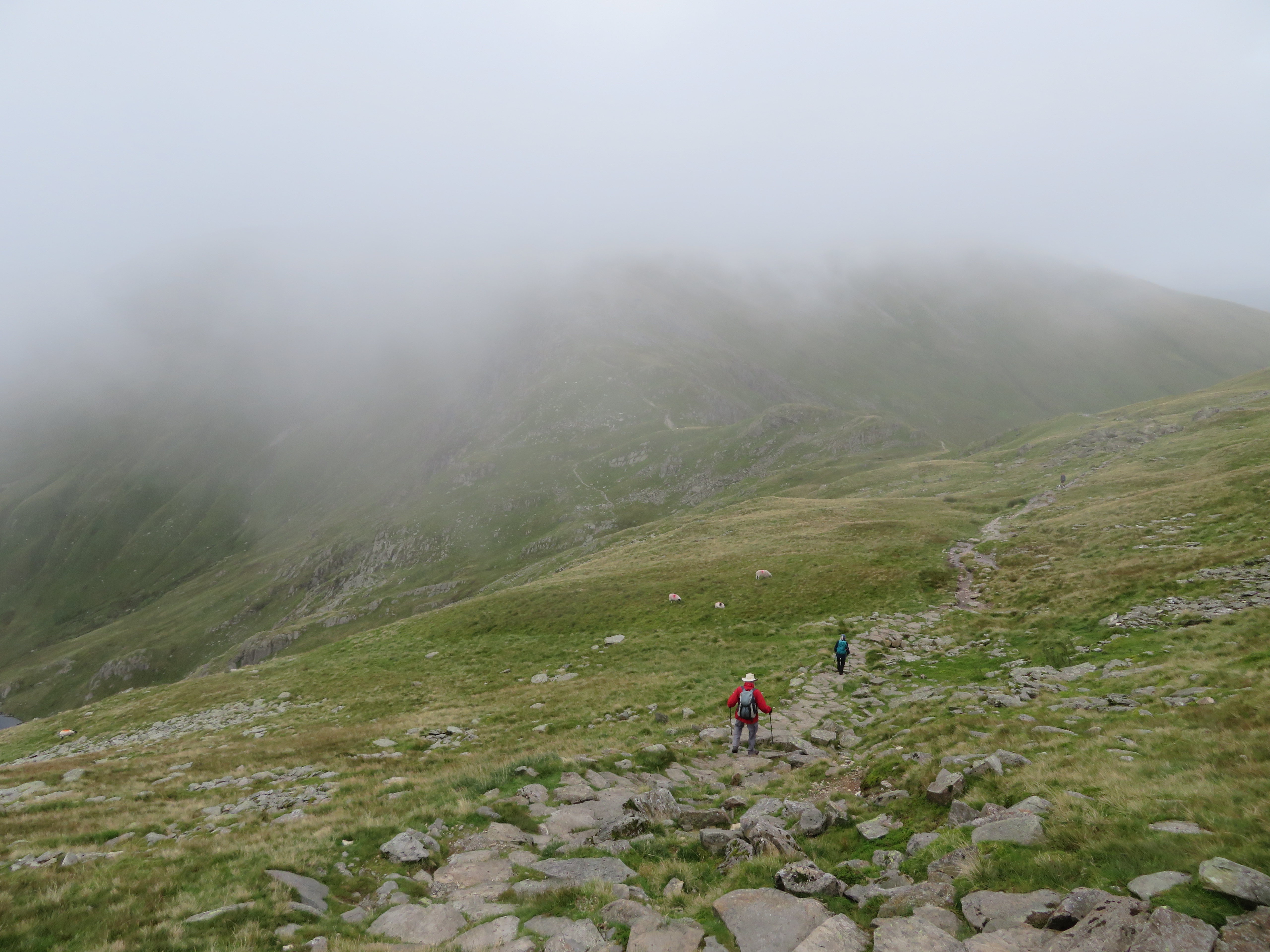 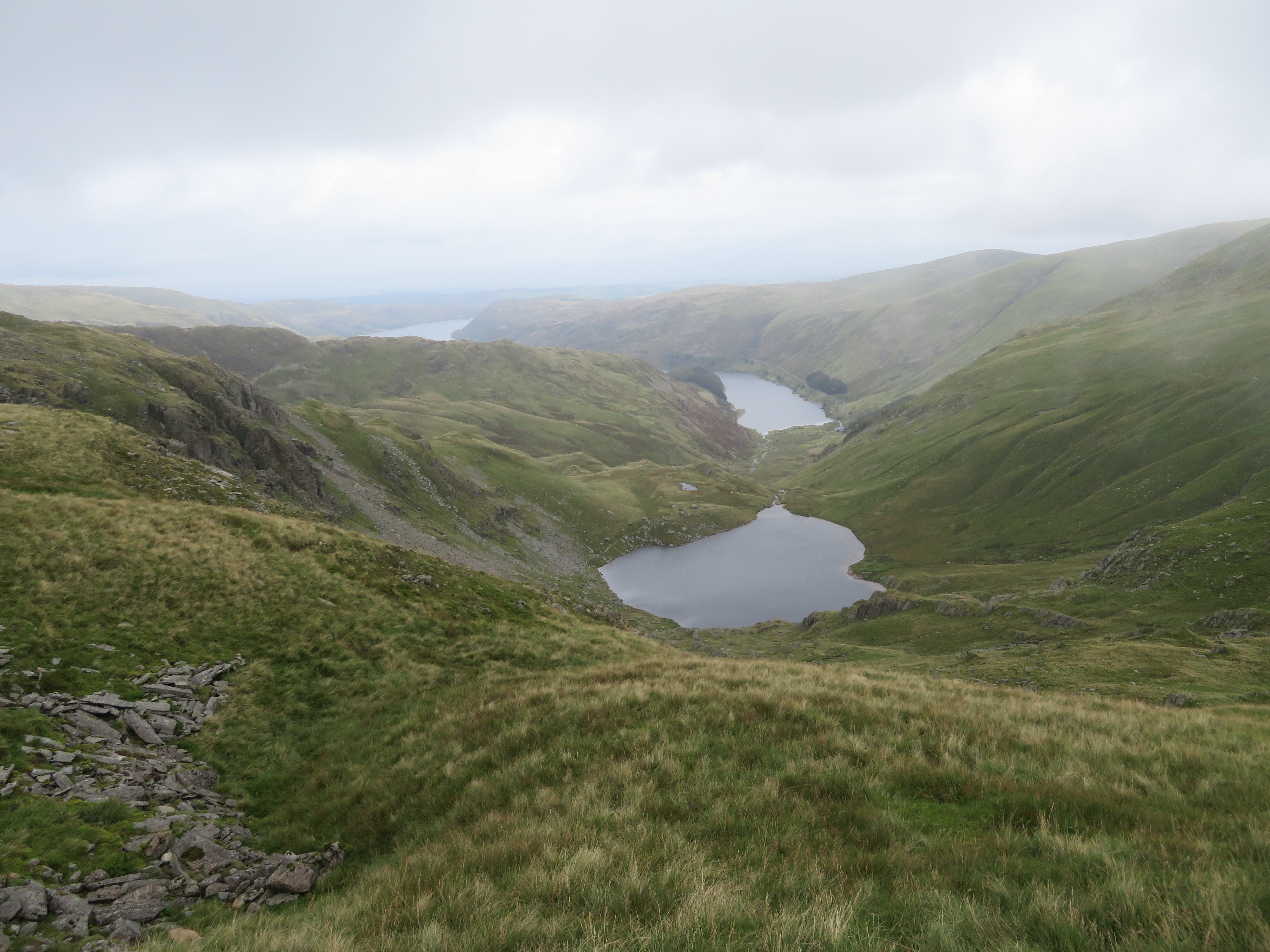 Before we arrived at Nan Bield the cloud began to lift off Harter Fell. 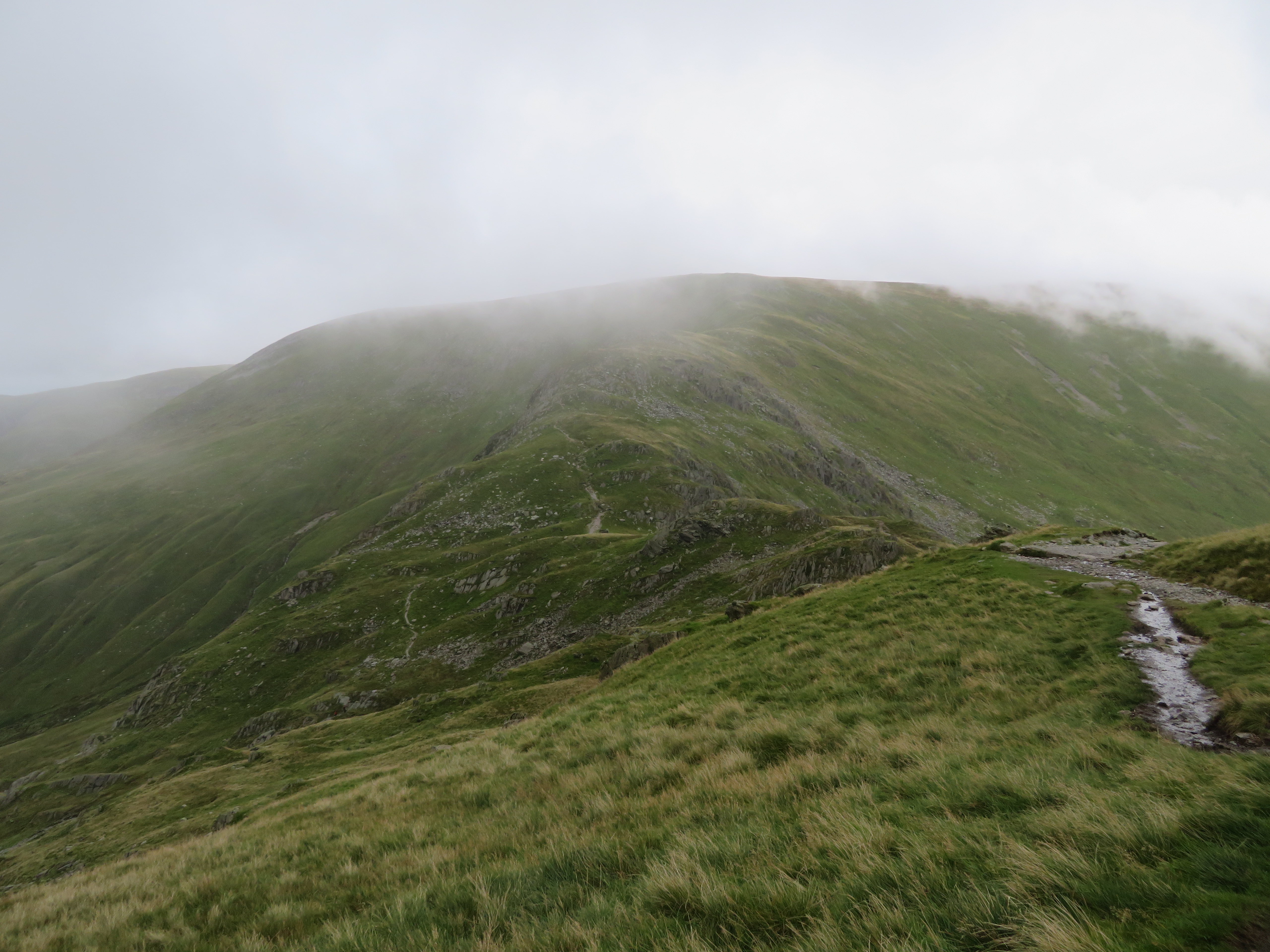 We started the easy climb out of Nan Bield meeting many others making their way down from the summit and it wasn’t long before we reached the point from where we had a decent view of Kentmere and its background of the three western mountains of Yoke Ill Bell and Froswick with the scars of past mining reminding us of its industrial past. 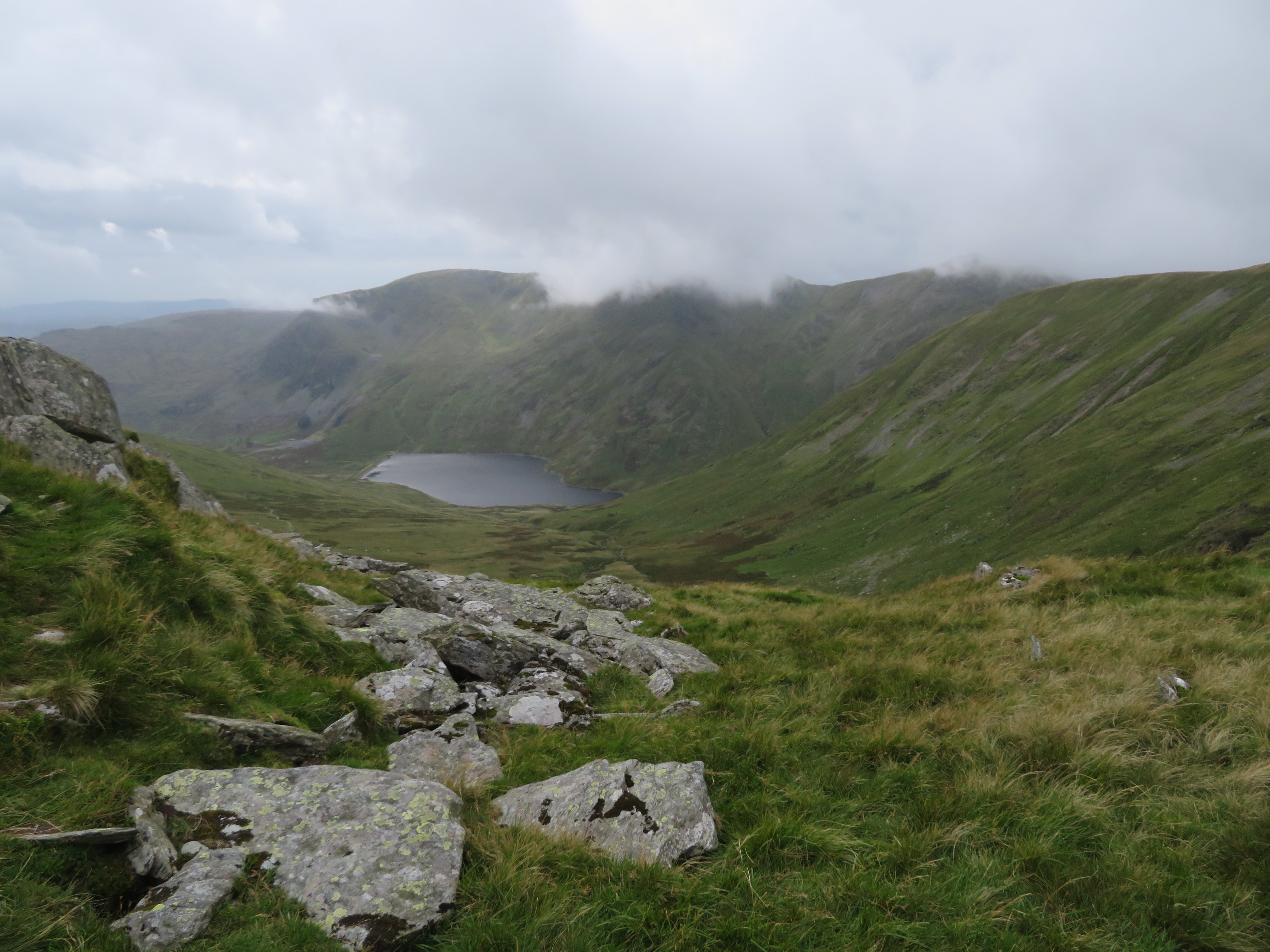 Kentmere from the lower slopes of Harter Fell

Also a view back to what we had just crossed. 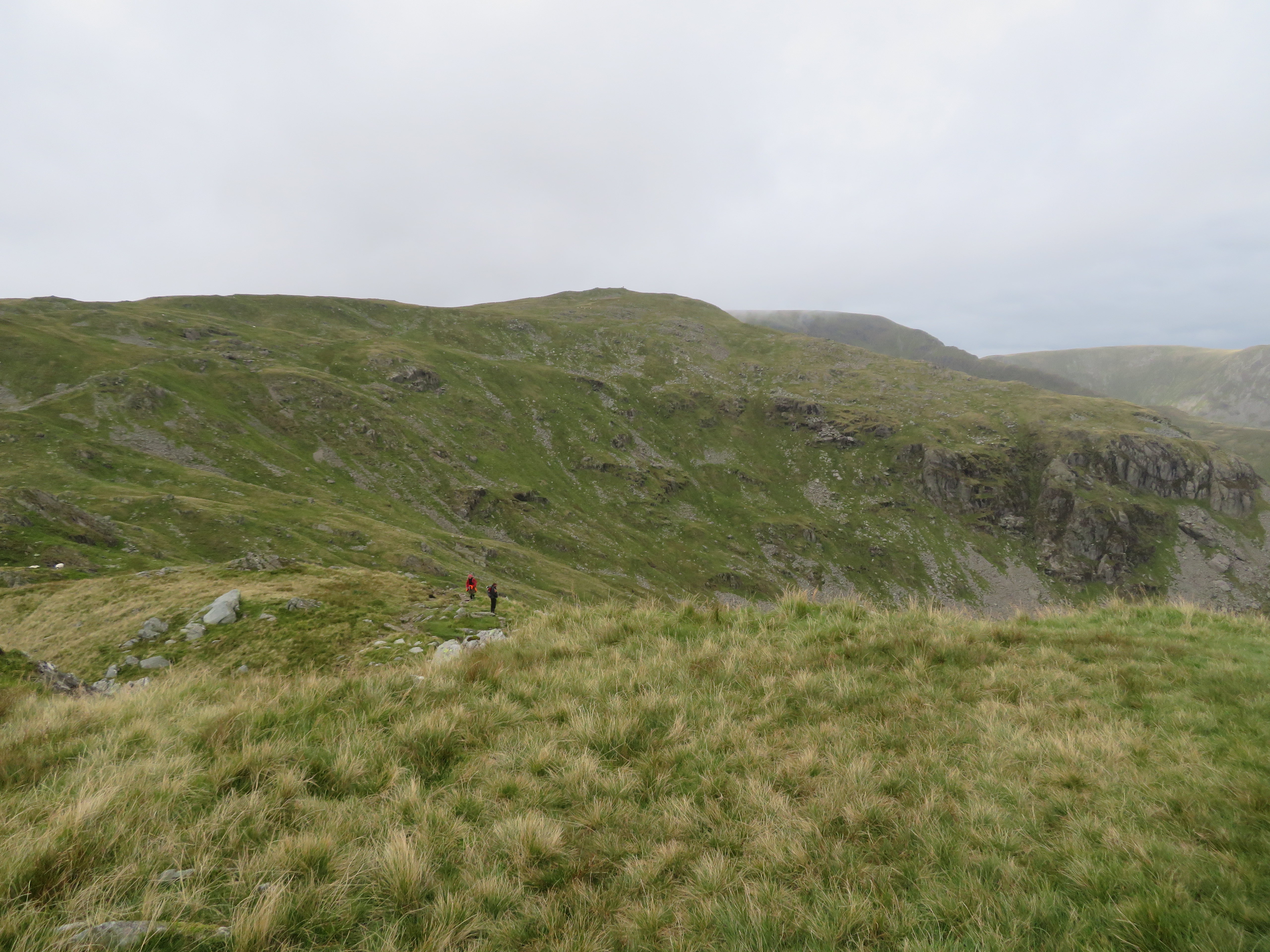 Looking across to Mardale Ill Bell

Just a few metres higher and we could see all the way to Kidsty Pike with the light coloured mound of High Raise behind it. 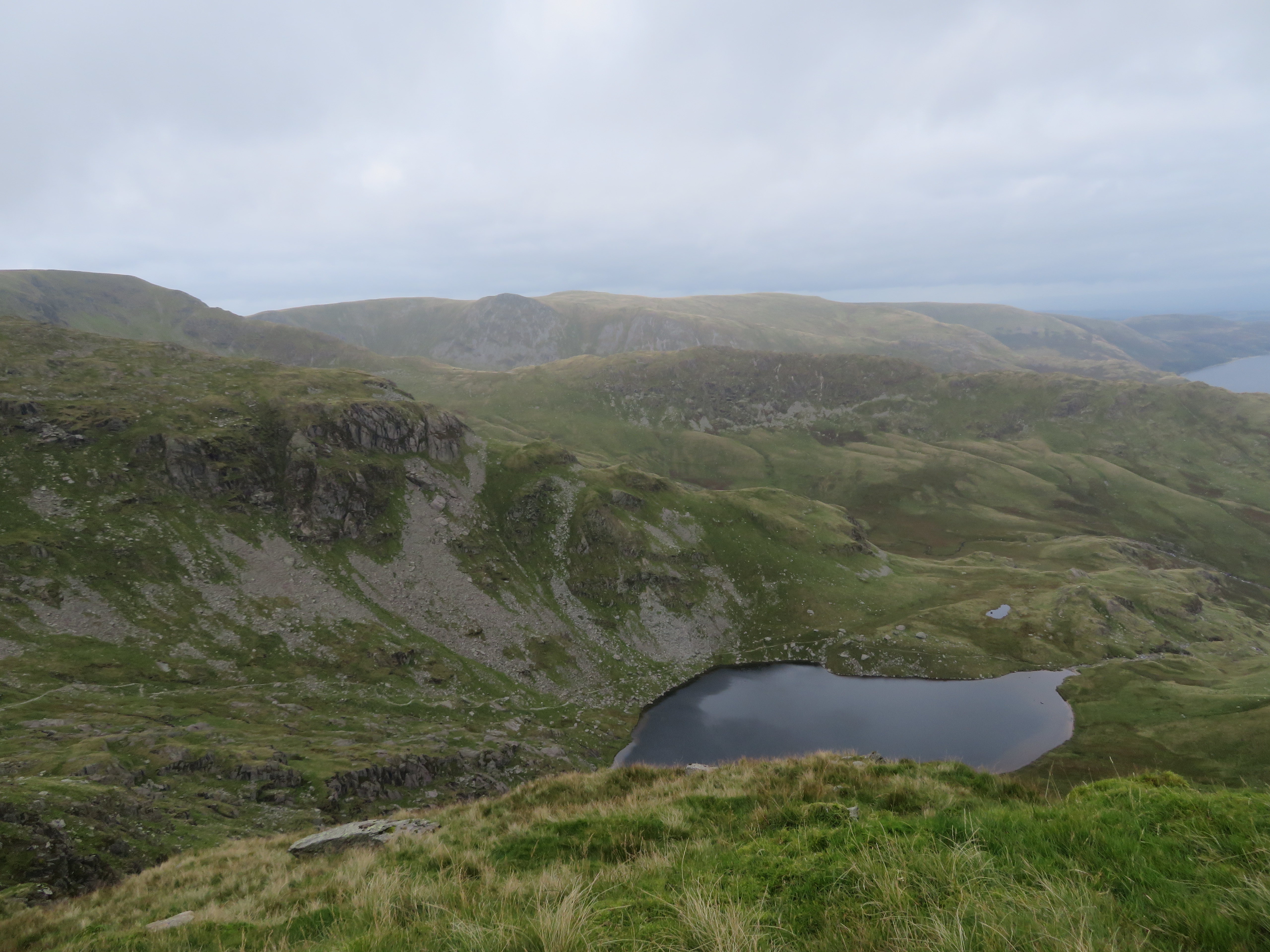 By this time we were less than 100 metres and a few more minutes from the summit and its cairn of tangled iron fence posts and stones of which only merited a quick photo of E and Martin before passing on to the viewpoint and shelter on the far skyline further along the top and Little Harter Fell further down the northeast ridge. 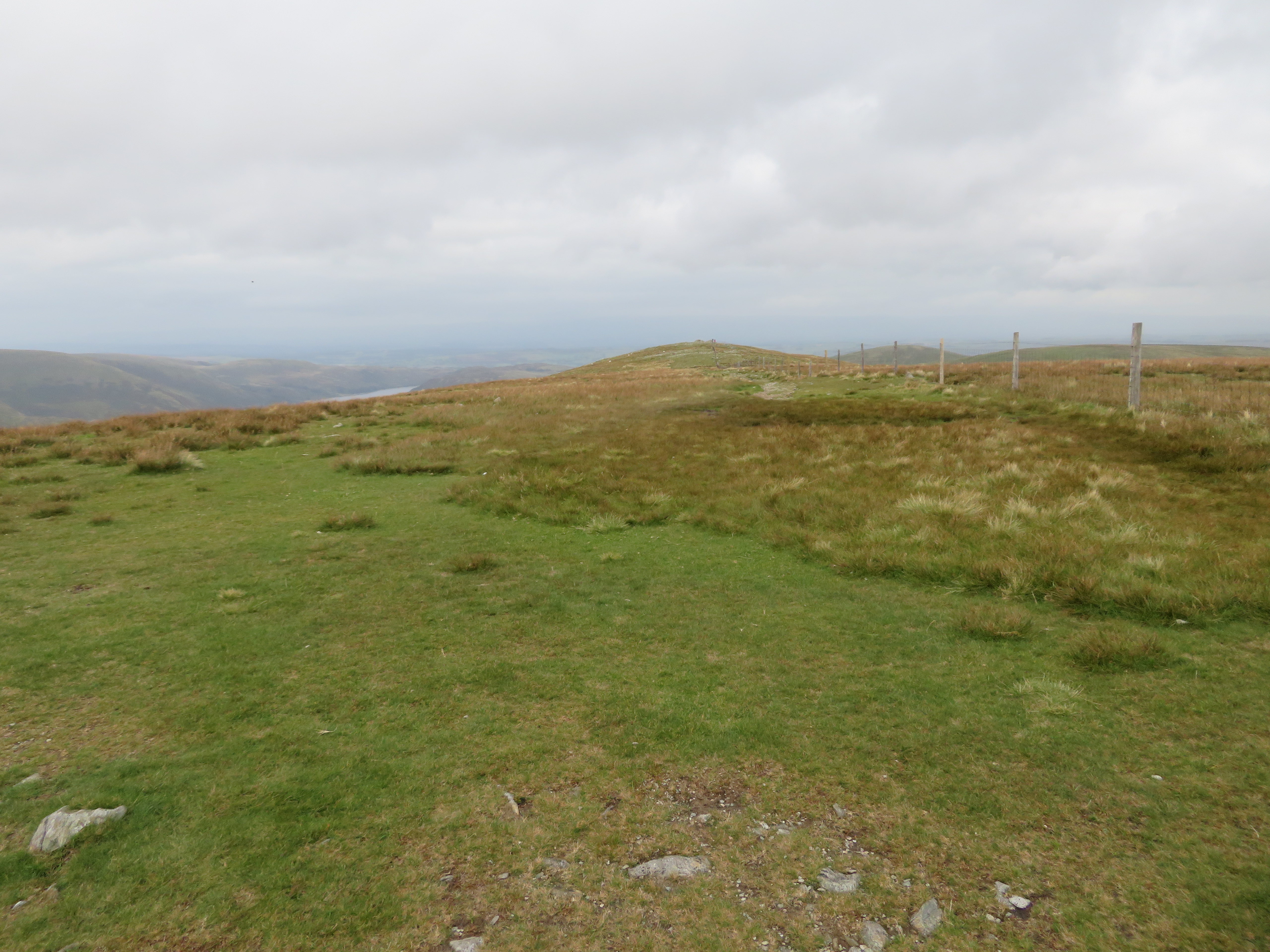 The way to Little Harter Fell

The next photo was taken from the 740 point at NY46478 09713 and just takes a short walk off piste to get there. Again the cloud cover and hazy conditions didn’t make for a brilliant shot but you just have to take what’s on offer on a day to day basis. 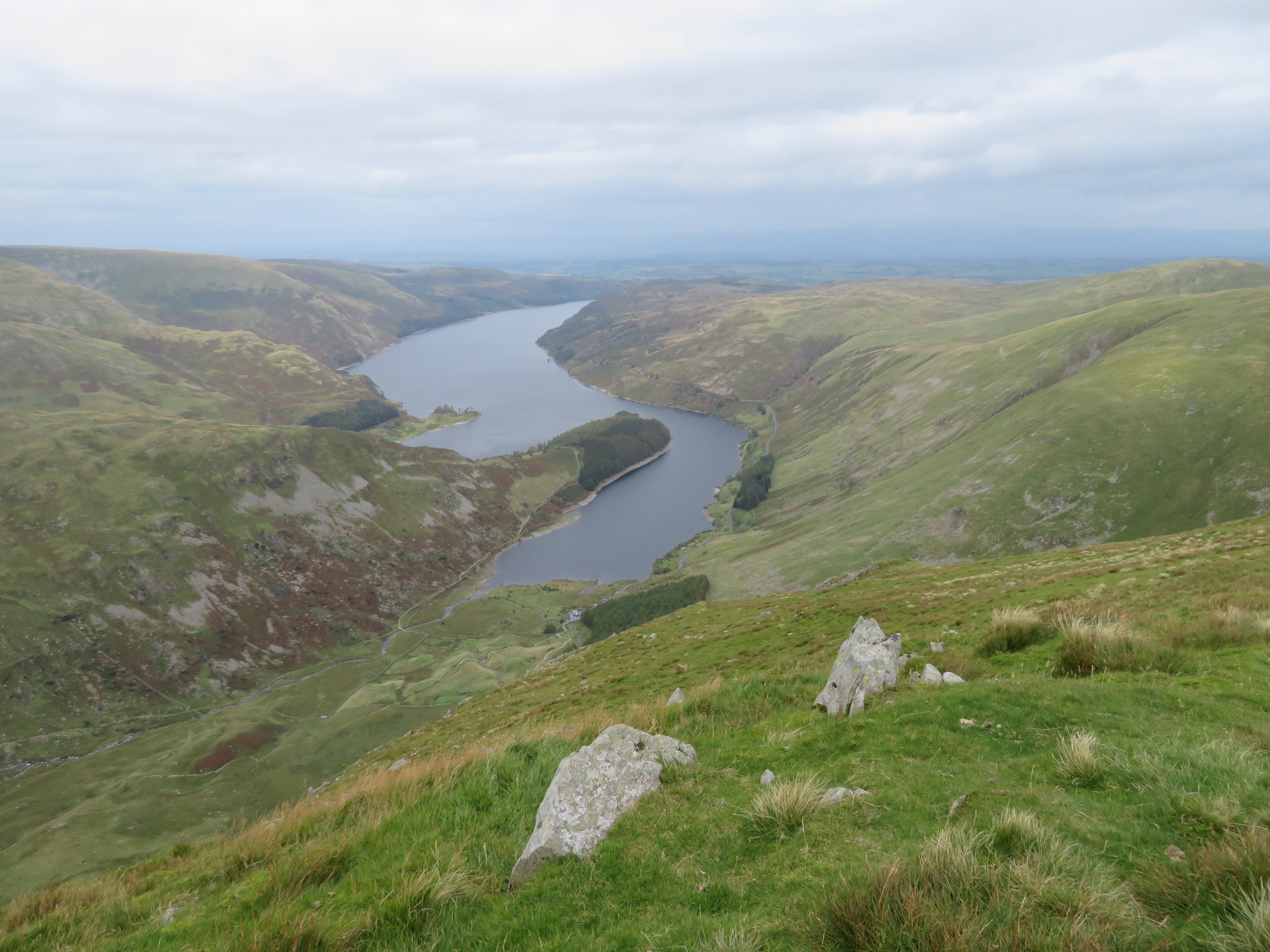 All we had to do from this point was to follow the good path southeast down to the Gatescarth Pass and follow that rather stony way back down to Haweswater and a still packed car park after another good day out on the fells despite the wintery feel of the day, a feeling that we will shortly have to get used to once again as autumn and winter spread their cold wet tentacles around the country during the coming months. Once again calling in at the local hostelry is a no no, so we shall imbibe a few libations from the fridge at No. 6 and conduct the walk post mortem there.


Fairfield? Almost, but not on this walk.

A walk to the Pennine's highest.

A walk along the Cumbria Way to Great Calva.

A short starter of two by three, for E.

We saw raven's, but not on St Raven's Edge.