We had a short window of Friday evening and all Saturday to get back up north and do a bit of munro walking. Fresh from our success in France of climbing L'Etale we were feeling good in decided on the ambitious plan of taking on the Ben Cruachan 4; aiming to go anti-clockwise starting with Beinn Eunaich (a route inspired by what I've read on these forums). The vague plan was to leave Durham straight after work at about 1700, head up to Loch Awe, arrive about 2130, bivvy somewhere, and then do the rounds of Beinn Eunaich, Beinn a'Chochuill, Stob Daimh and Ben Cruachan. What could go wrong?

I seem to have a bad habit of over-estimating what is reasonable to try and achieve!.. and having too much faith in what seemed to be a reasonable weather forecast for Friday night.. a chance of some light rain but otherwise ok. My thinking was that we could handle a bit of rain, we never sleep as well in a bivvy bag as we do in, say, a 5-star hotel, and on one of the longest days of the year if you don't sleep well you can just get up at dawn and get on with it, right? Bivvy bags selected over tent, in the car, and off we go.

In retrospect doubts should have set in earlier than they did. Torrential rain as we left Durham at 1700 and we were thinking we must be insane to drive 4 hours north and camp out for the night on top of a mountain. Then the lightning started. I needed to stop for petrol but they weren't serving any because of the storm. We eventually did get to Loch Awe, it was cloudy but not raining, so on with the boots and off we went towards Beinn Eunaich.

The light was already fading as we set off past the Highland Coos at Castles Farm. It started to spot with rain as we ascended along the track that skirts under the left side of Beinn Eunaich. The clouds descended and the view we had previously had of Stob Daimh and Ben Cruachan disappeared. There was still time to head back to the road for a 'car bivvy' and set off in the morning instead, but we decided to push on, looking for the cairn that marks the path up Stob Maol to the broad long ridge that leads up to Beinn Eunaich. My thinking was that we would find a flat spot on the ridge, have some hot chocoloate, and set up a bivvy.

Quick hop along the track, up the slope, set up bivvy.

Hmm.. summer in the highlands sometimes doesn't feel like summer at all. Shortly after we turned right at the cairn for the steep slog up Stob Maol the rain fell harder. It being mid-summer the light was ok even though it was well after 2200 so we decided to keep at it. The way is steep but the path better than I'd thought it would be.

Calf-buster up to Stob Maol. Steeper than it looks.

Luca had finished his last GCSE earlier in the day (well done). And now here we were at 2300 in the pouring rain on a mountainside with only our bivvy bags and a tarp for comfort. Last year we headed up Ben Macdui in similar circumstances with a similar forecast and got very lucky when at the summit the skies cleared, the wind disappeared, the full moon came out, and we had a spectacular dawn and cloud inversion when the sun came up next day. Sadly the mountain did not want to be so kind to us this time. Nevertheless we got to the ridge at Stob Maol without issue and the rain was kind enough to stop for a bit whilst we set up bivvy (using tarps and bunjee) and had hot chocolate. We were ok with having an uncomfortable night. Rain was forecast and sure enough it came. However, rain that was forecast to be 'light' and 'showery' ended up being biblical and sustained. I've never seen or heard anything like it. We pegged the tarp down close to our heads and I was surprised to find that Luca actually fell asleep (I suppose it has been hard work with all those exams). Sometimes it's amazing how vicious the weather on the hills can be! I recall thinking that this rain was about the heaviest, loudest rain I'd ever heard. And then it rained harder and louder. It seemed the whole Atlantic was being emptied on top of us. The inevitable happened, of course, and the inside of our 'accommodation' got flooded. It was, in short, very cold wet and miserable. The morning was a blessed relief because the rain downgraded itself back down to drizzle.

It was obvious by this point that the full Cruachan 4 was not going to happen... this confirmed when I found that my boots had escaped from their position under the 'mini-tarp' and were full of water. One has to laugh. The rain died down a bit and we packed up... made brief use of the 'space blanket' I never expected would be needed in summer, whilst changing into dry t-shirts. At least our decision to go with bivvy bags meant our backpacks were light (the only silver-lining we saw that day).

We decided to go for Eunaich summit then work out if we had any motivation to go on from there for Beinn a'Chocuill. We might have done... but although the rain stopped, it was replaced in peril by an equally abusive wind. There was a brief moment where the sun peaked in under the cloud base to light up Loch Awe. That lasted about 5 minutes and business as usual resumed. 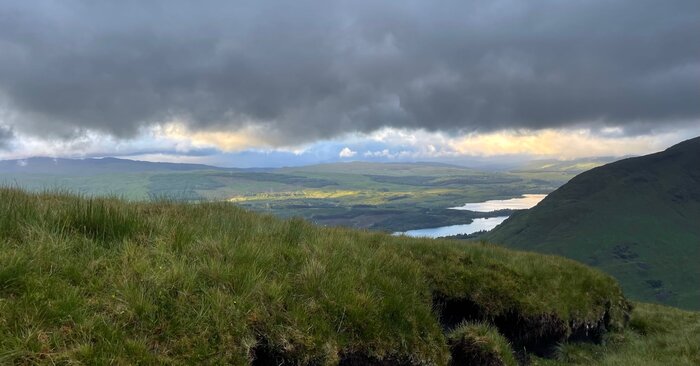 Targets that will have to wait for another day.

The amble up to Beinn Eunaich summit was a lot longer than we thought it would be. The clouds would part every now and then to reveal that what we thought was going to be the summit cairn was nothing of the sort. A brief moment of joy was encountered when we opened a bag of wine gums populated entirely by red and black ones. 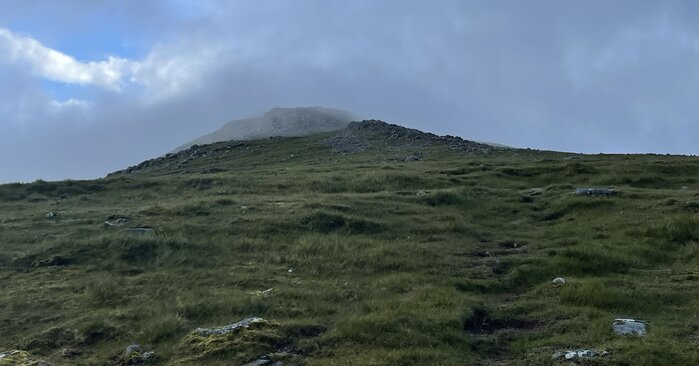 Beinn Eunaich up there somewhere. 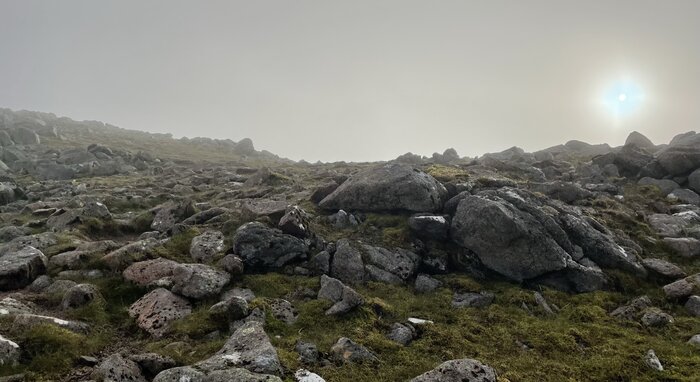 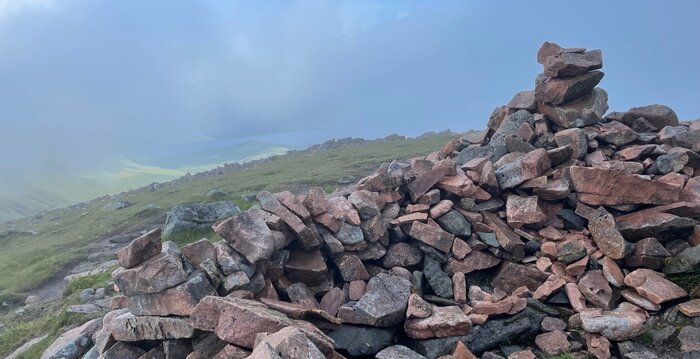 Beinn Eunaich. Worth it for the views.

We couldn't fail to be impressed at just how awful the wind and rain could be even in the middle of summer. As the morning went on it did get a bit brighter and there were some wonderful views to be glimpsed from the path down to Larig Baelach from Beinn Eunaich summit. We did consider going on along the ridge to Beinn a'Chochuill, a conversation we had to have shouting at the top of our lungs on account of the wind... but, nah, we'll do it another day. We'd had enough of it for now, wet and miserable, the thought of going back to the car and driving off to find something hot to eat was too great.

The bealach where we bailed.

The wind and clouds whipping along up the slope and over the bealach between Beinn Eunaich and Beinn a'Chochuill was a sight to behold. This was where we decided to call time on the walk. We've had some great days out in the hills over the last couple of years. This was not one of them!
Click to mark this as a great report. Register or Login free to be able to rate and comment on reports (as well as access 1:25000 mapping).

Combe de la Blonniere - Where the peaks have no name

Arrochar Alps snow and wind: 1 out of 3 aint bad

Up at dawn - Crib Goch and Snowdon Horseshoe