Arrochar Alps snow and wind: 1 out of 3 aint bad

We originally planned to climb 3 of the Arrochar Alps: Ben Vane, Beinn Ime and Beinn Narnain.

It didn't turn out like that! We got to the top of Ben Vane (a lot harder than we'd expected) and started making our way towards Glas Bhealach below Beinn Ime but the wind was vicious and once or twice we were thigh high in snow. This was too much for us. Ice axe very much needed. We turned around, re-summited Ben Vane and descended the way we'd come. In retrospect we would never have had time to complete the route we wanted to do in the time we'd given ourselves.
But... Ben Vane! What a munro! A wonderful scramble in those conditions. We had a great day.

Nope. Our 2nd target viewed from the west face of Ben Vane. We were not going to get up there today.

Conditions were great this side of the mountain!

Since our ascent of Ben Chonzie in March we were eager to get back into the hills again for something a bit more challenging. Hours spent daydreaming about what routes we would take. In the end we settled for the ambitious plan of 3 of the Arrochar Alps.

We left Newcastle after watching the Friday Night match at St James Park (rare win for Newcastle). We set off in high spirits and arrived at Inveruglas at 2am (ridiculous, I know). Plan was for a 'car bivvy', climb our 3 munros, then clear off home. Looking back - that was never going to happen!

Very uncomfortable nights sleep (who'd have thought it?)
But excited to be up in the morning and on our way to Ben Vane. It all starts off fairly easily. The weather was great - none of the advertised snow showers and -13 degrees wind chill. We had layered up in preparation (thermals etc...) and spent the early part of the ascent de-layering as the morning sun beat down on us. We were enjoying the views of the snowy tops - though from down there Ben Vane itself did not look too white.

Nice views of Ben Vorlich to the right and Beinn Ime hiding in cloud tucked away to the left of Ben Vane. Beinn Narnain and the Cobbler slowly came into view. A good quantity of snow but it all looked do-able. Amusingly we even thought we might look in on The Cobbler and Ben Vorlich if we felt like it as we were passing (no chance at all!!)

Ben Vorlich. Might check in on the way back (not a chance!) 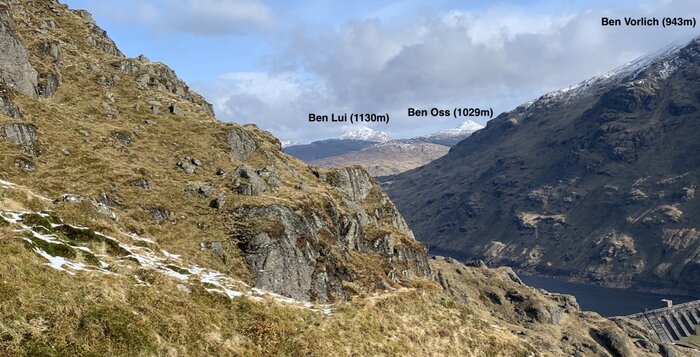 Why stop at only the Arrochar Alps?

I always seem to overestimate what is achievable. So much time spent dreaming about getting back in the hills then we (or at least I) think we can climb them all at once. Ben Vane by itself was more than enough for today. It was a harder than we'd thought it would be. I suppose we thought the modest 916m meant it would be one of the easier ones. But it is climbed more or less from sea level and it surprised us with a succession of false summits and some involved scrambling in snow and ice that it didn't look like was there from the bottom. 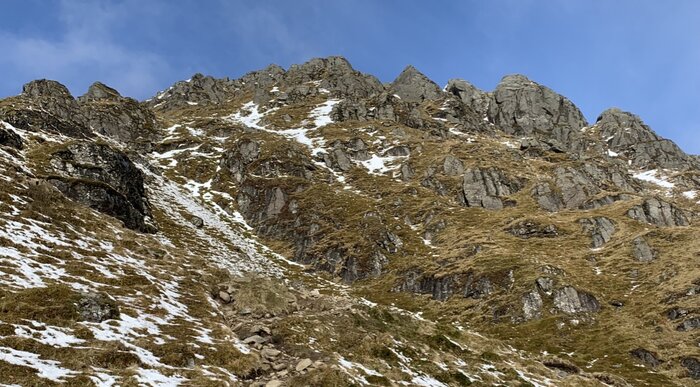 Ben Vane false summit. Nowhere near the top yet. 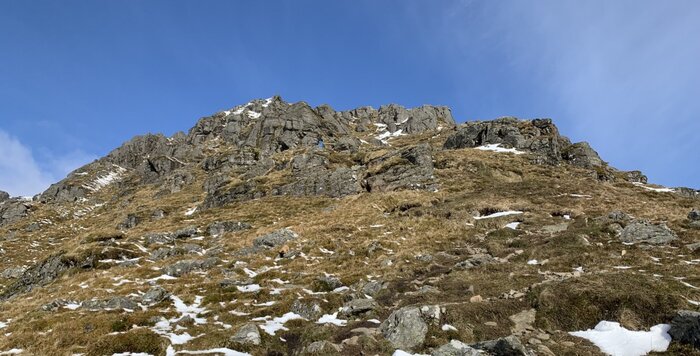 That's not the top either.

The views opening up around us were fantastic. The forecast was for snow showers but we got lucky. Even put the suncream on as we stopped for breakfast.

View over Ben Lui direction. Maybe going that way later in the year.

We hit snow, and some scrambling made tricky by icy rocks. Still the false summits kept coming and we were asking ourselves how can this mountain be only 916m? It was great fun. We don't have many munros under our belts at this stage but Ben Vane has emerged as an unexpected favourite.

Keep at it! Surprising amounts of snow on the upper reaches.

Hmm... that's the bealach between Beinn Ime and Beinn Narnain through there. It's an awfully long way away. First doubts starting to creep in. 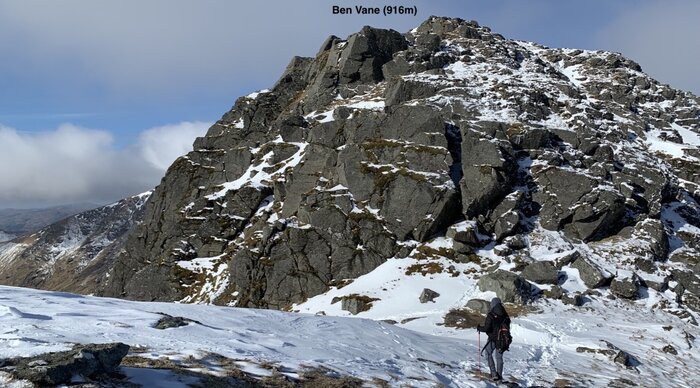 Ben Vane's not done yet. Another false summit.

At last we reached the true summit. It took longer than we'd thought. Serious doubts emerging about whether we can get over the top and pop up Beinn Ime and skip across Beinn Narnain. On the summit the wind hit us of course. The promised -13 wind chill was upon us. 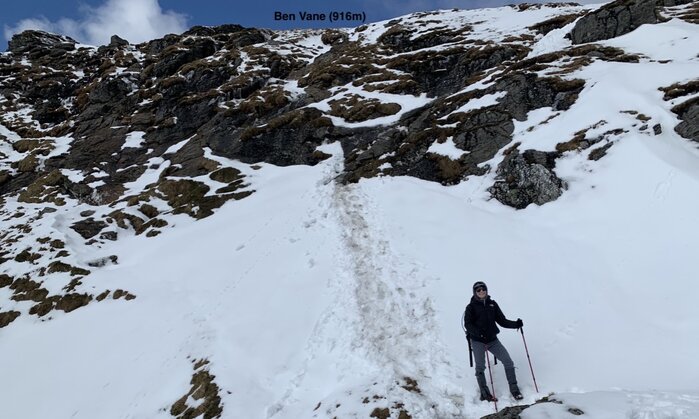 The final scramble for the top.

We stayed around at the summit to enjoy the views and look over the route we were still half thinking we'd attempt. We were ready for food but it was far too windy on the top so we decided to descend down the west face towards Beinn Ime and find some shelter. Then we'd make a call on whether we'd go for munro 2 and 3.

The other side of Ben Vane was completely different to the Loch Lomond side. The wind was relentless and some of the snow drifts enormous. It looked a heck of a long way down to Lag Uaine and up to Glas Bhaelach. The slope up to Beinn Ime looked like it was all snow and ice and we knew it wasn't going to happen. We're reasonably experienced but we're mostly summer scramblers so we knew when we were beat. We stayed around to have a bit to eat and take in the awesome wildness of the Beinn Ime east face. I would have taken more pictures but the wind chill made my fingers numb. All the layers we'd taken off on the Loch Lomond side were now back on.

The route we would not be taking today. So great to be up there in the wilderness nevertheless.

We headed back up to Ben Vane summit and down the way we'd come. We thought about changing plan and going for Ben Vorlich instead of Beinns Ime and Narnain. But in the end we decided Ben Vane was enough for today. It was a thoroughly enjoyable scramble.

The west side of Ben Vane. Very different conditions to the Loch Lomond side.

We'd passed a couple of groups on the way up Ben Vane and stopped for a chat. One of the groups made it to the top but the others had turned back. Further down there were lots of people taking advantage of the weather and having a go for the summit. We felt like Edmund Hillary and Sherpa Tensing fielding questions on how far is it to go? Did you make it to the top? Do you need crampons? The conditions were quite challenging so not everyone will have got all the way to the summit. But as we found, it didn't ruin our day that we didn't achieve what we'd set out to do. It was a great day to be up in the hills regardless.
Click to mark this as a great report. Register or Login free to be able to rate and comment on reports (as well as access 1:25000 mapping).

Up at dawn - Crib Goch and Snowdon Horseshoe

Zugspitze via the Gatterl - over the border at 2000m