We had been hoping to head up to Skye this weekend to climb our final Munros in the Cuillin, but a forecast of rain and gale-force winds in the west meant that common sense (wisely) got the better of ambition, and so we decided to give the Cuillin a miss. Plan B involved a couple of days further east where the weather was predicted to be marginally better. First up – a pair of Corbetts on the western fringe of the Monadhliath.

Drove up the minor road along the Spey Valley west of Laggan. Maps show the road ending at Garva Bridge (built by Wade in 1732), but the surfaced road continues several miles further, almost to Melgarve (NN467959) where there is plenty of space for parking. 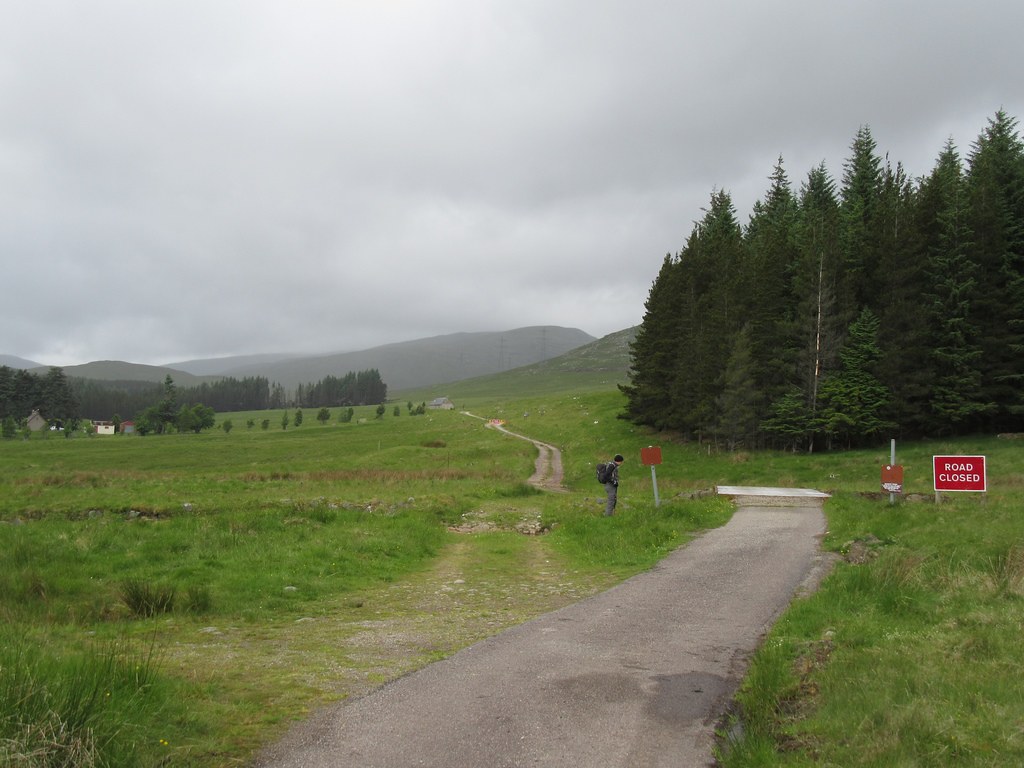 Headed west along the track towards the Corrieyairack Pass, but soon diverted off to take a nosey into Melgarve bothy. A couple who were staying there for two nights had a roaring fire going; it was tempting to linger. 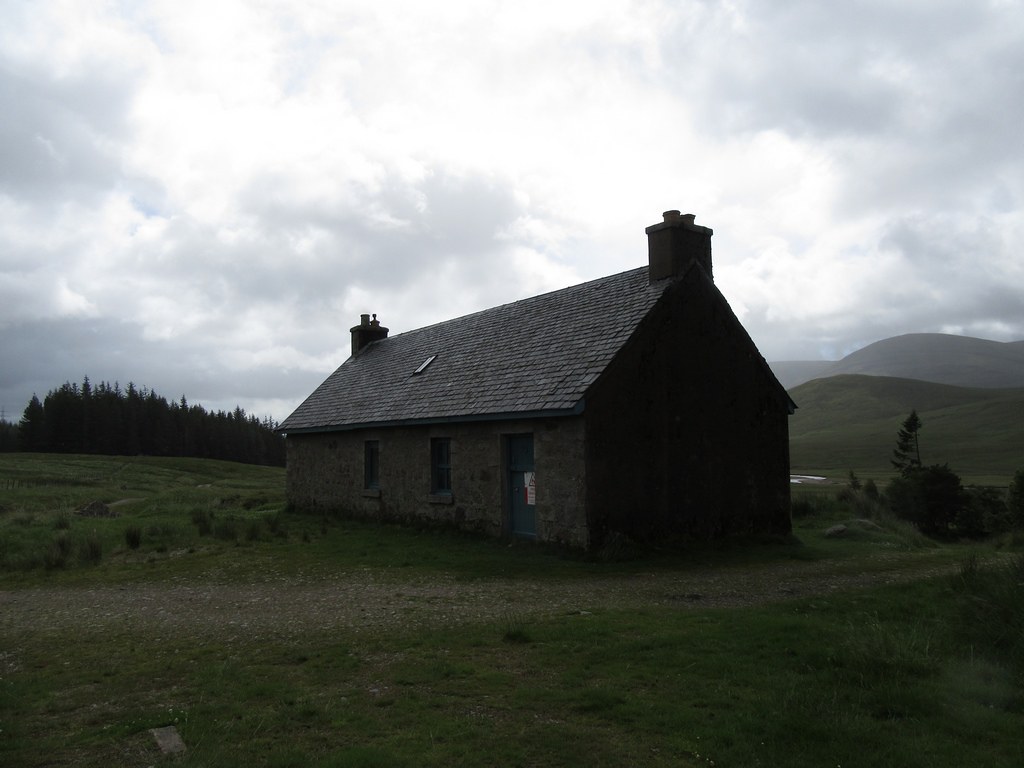 We now followed the Corrieyairack track for a couple of hundred yards further west, and then took to the hillside, keeping to the west of the Caochan Ban burn. There was a very strong, blustery, westerly wind blowing, so we kept below the ridgeline past Meall Garbh, trying to garner a bit of shelter. Periodic rain showers swept by, but mercifully they were brief. 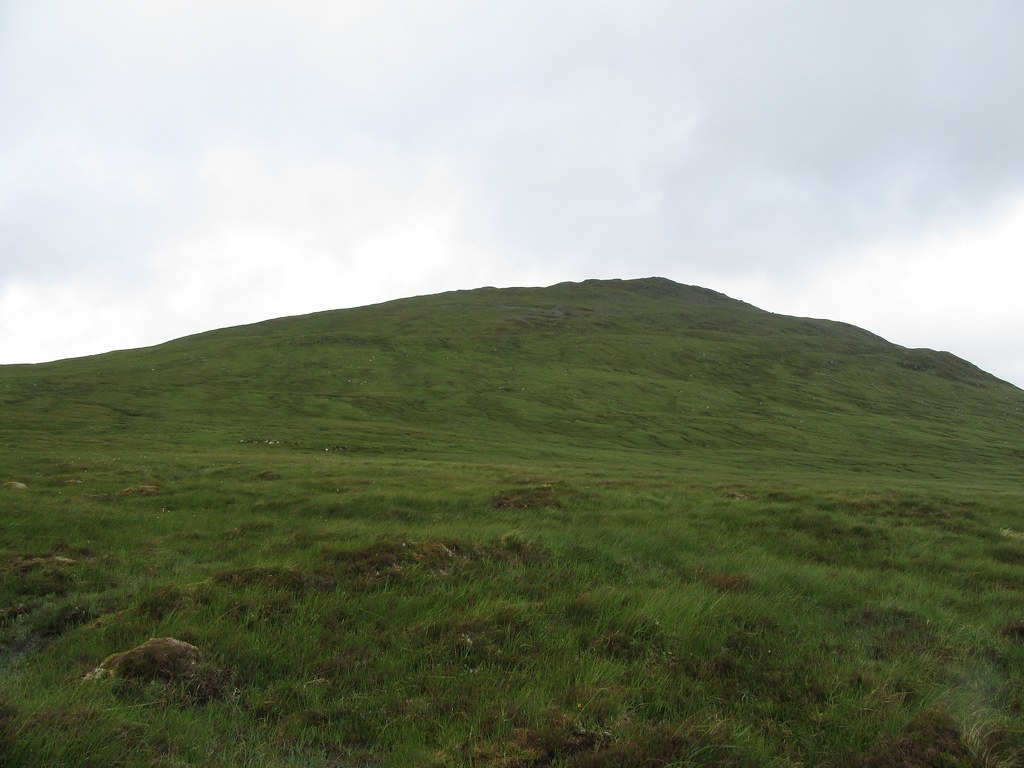 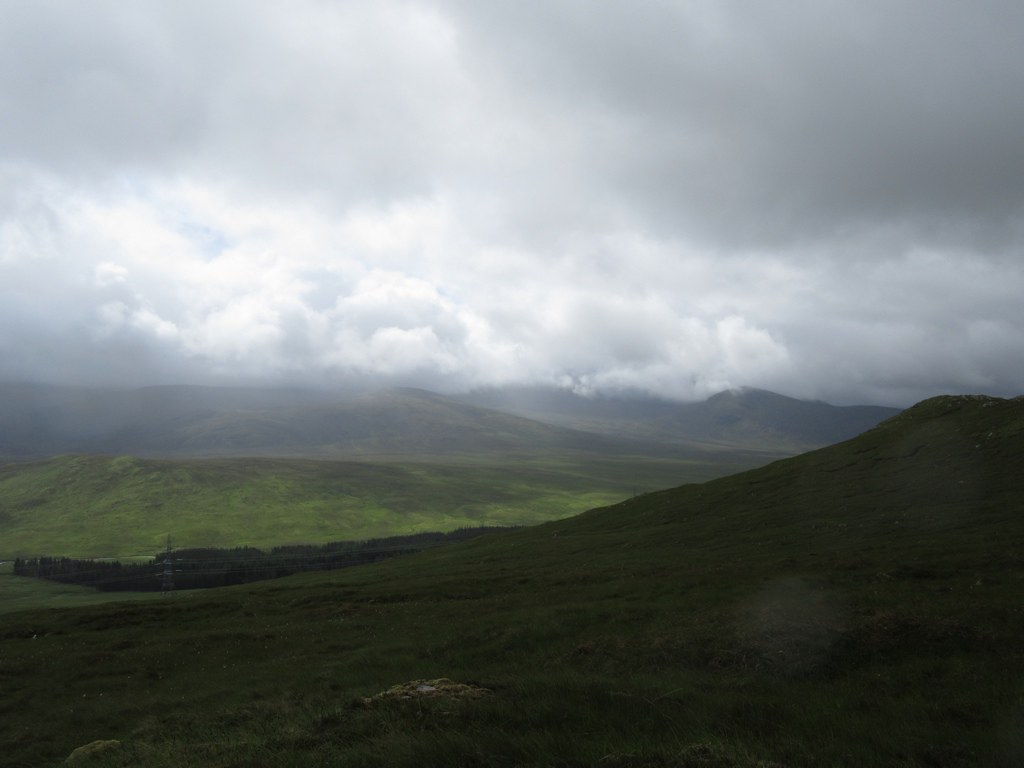 Eventually we crested the ridge close to the top of Gairbeinn to be buffeted by the wind. The summit has a tiny cairn, though there is a larger one nearby. Unfortunately views were somewhat limited by the low cloud, though the strong wind meant that visibility changed minute by minute. 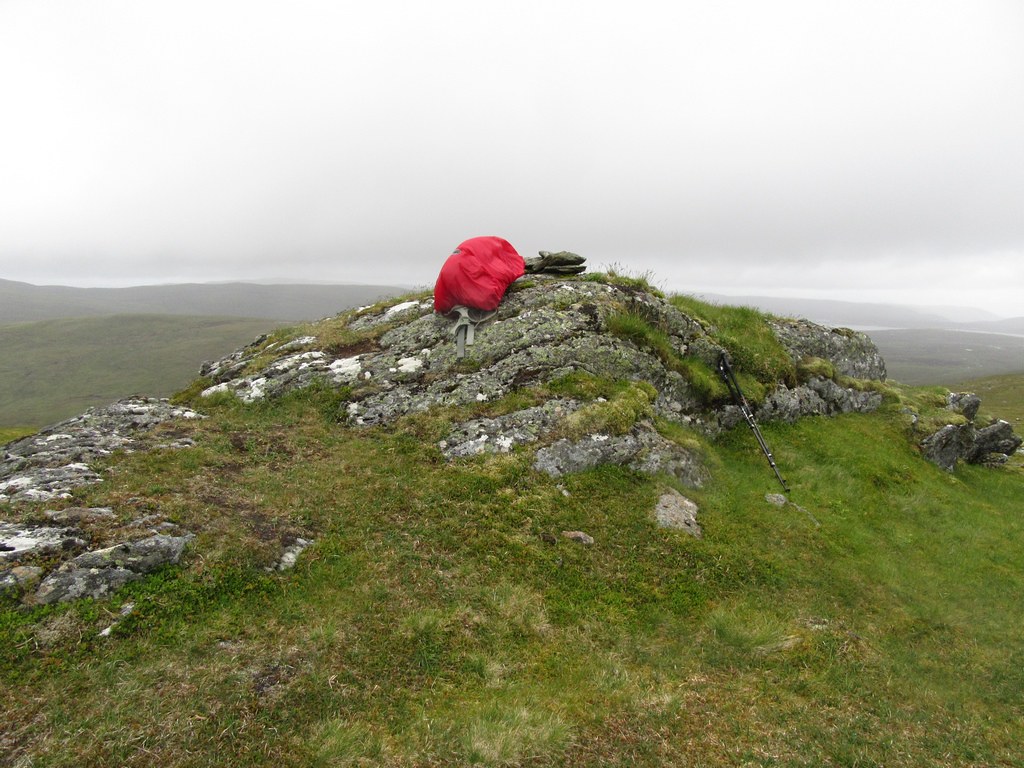 Looking east down the Spey Valley 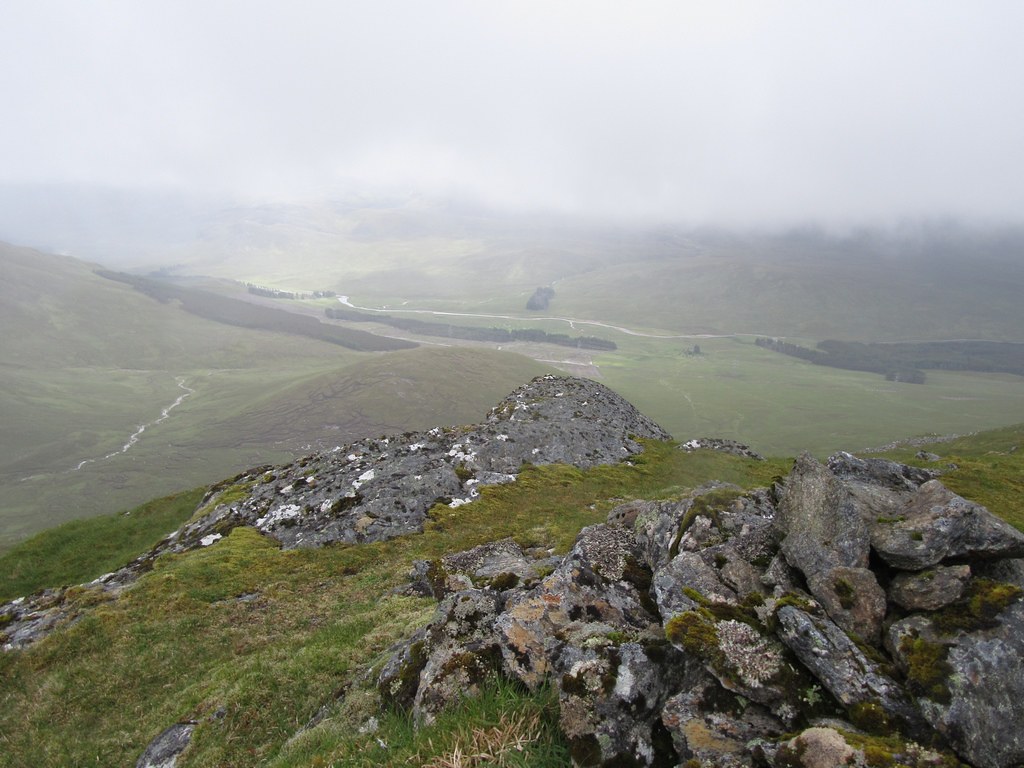 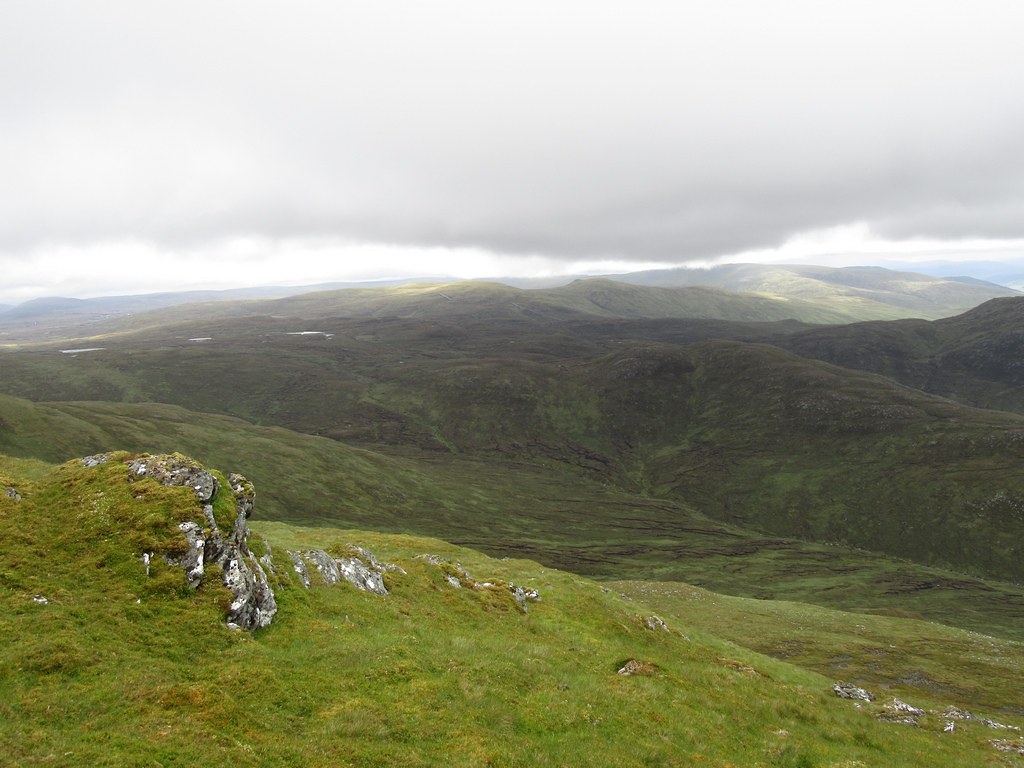 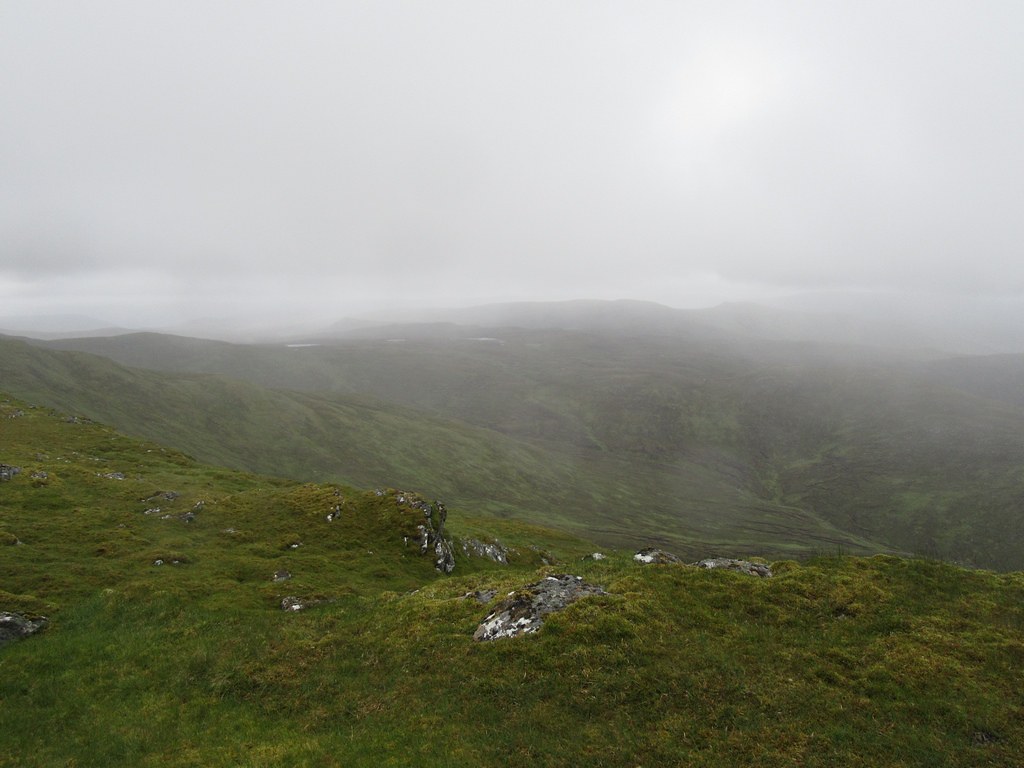 We hunkered down out of the wind for a bite of lunch, and debated whether to continue to Meall na h-Aisre. I’d read various descriptions of this ill-defined traverse - mostly dire (comparisons with Tolkein’s Dead Marshes being particularly vivid), but others being more nonchalant. I suppose it just depends on the conditions when the walk was undertaken, and how wet it had been in the preceding days. Well, it wasn’t raining horrendously today, and it hadn’t been that wet recently; visibility wasn’t too bad either, and we would have a tail wind. Wisely or otherwise, the decision to head east was made. Clearing cloud enabled us to suss out a prospective line of progress, at least in the early stages.

We wandered north along the pleasant, grassy summit ridge of Gairbeinn, but due to the strength of the wind, took to a shelf on its eastern side to traverse below the 870m top. 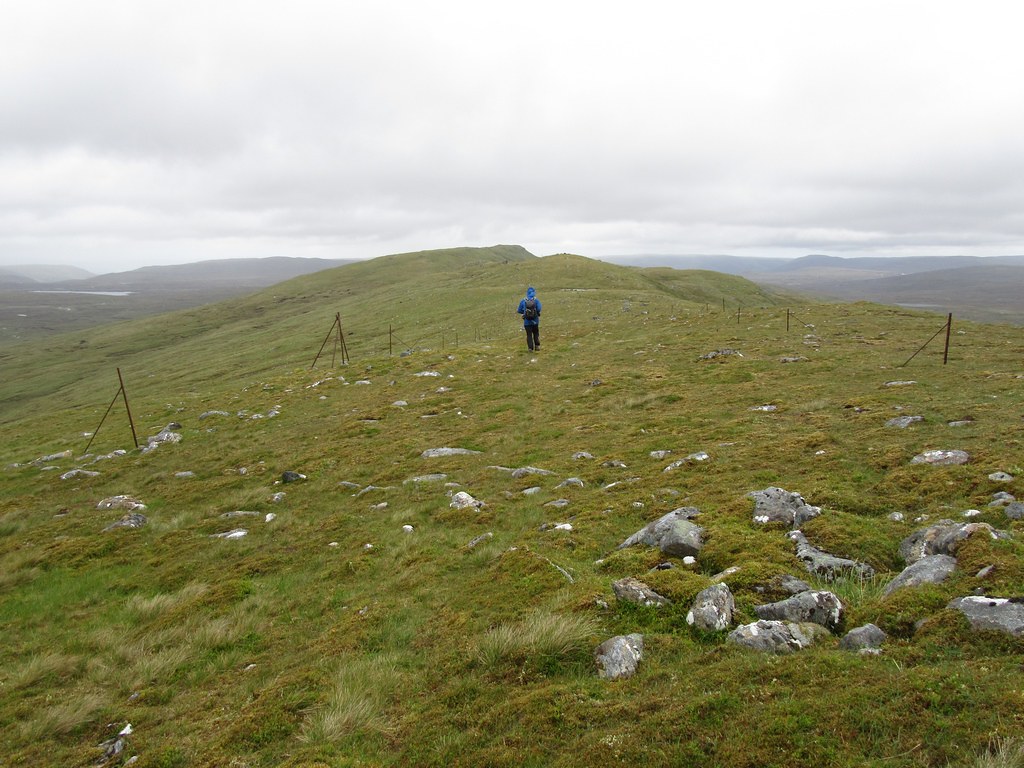 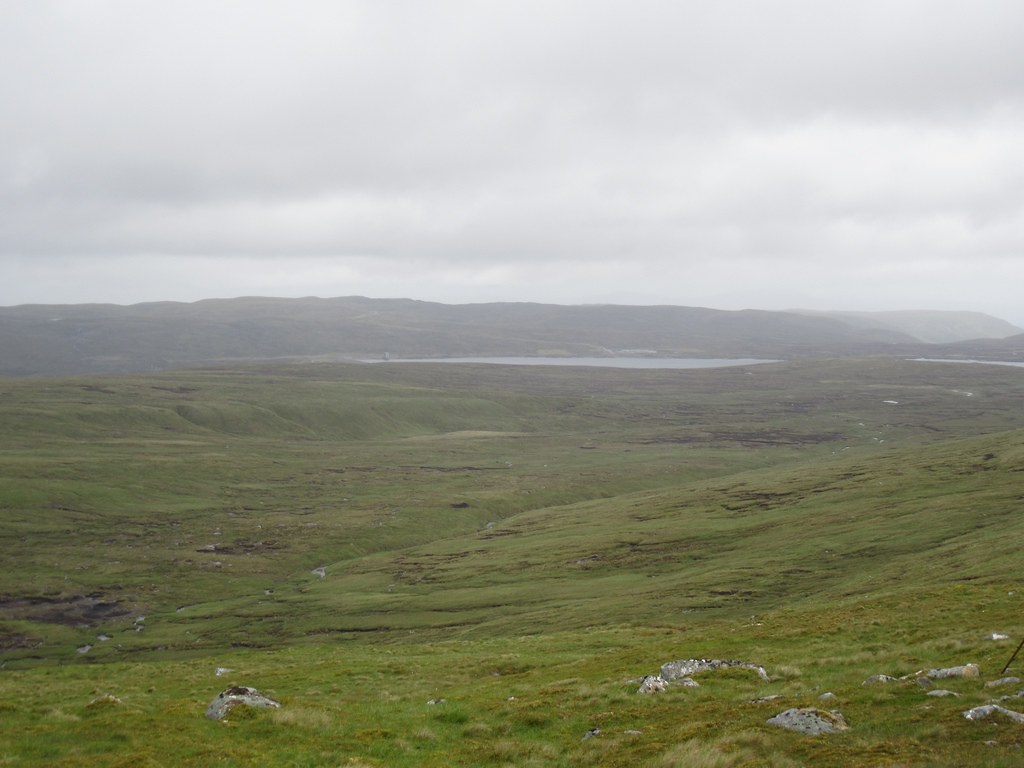 We hooked round the head of Min Choire, passing below the top pt. 786, to reach roughly NN481999, and then skirted the southern fringes of the plateau that contains Lochan Iain and Dubh Lochan to NN490994. Underfoot conditions so far weren’t that bad – not too soggy and not too many peat hags to contend with. Surprisingly, some blue sky even put in an appearance.

Head of Min Choire, with Lochan Iain and Dubh Lochan in the right middle distance 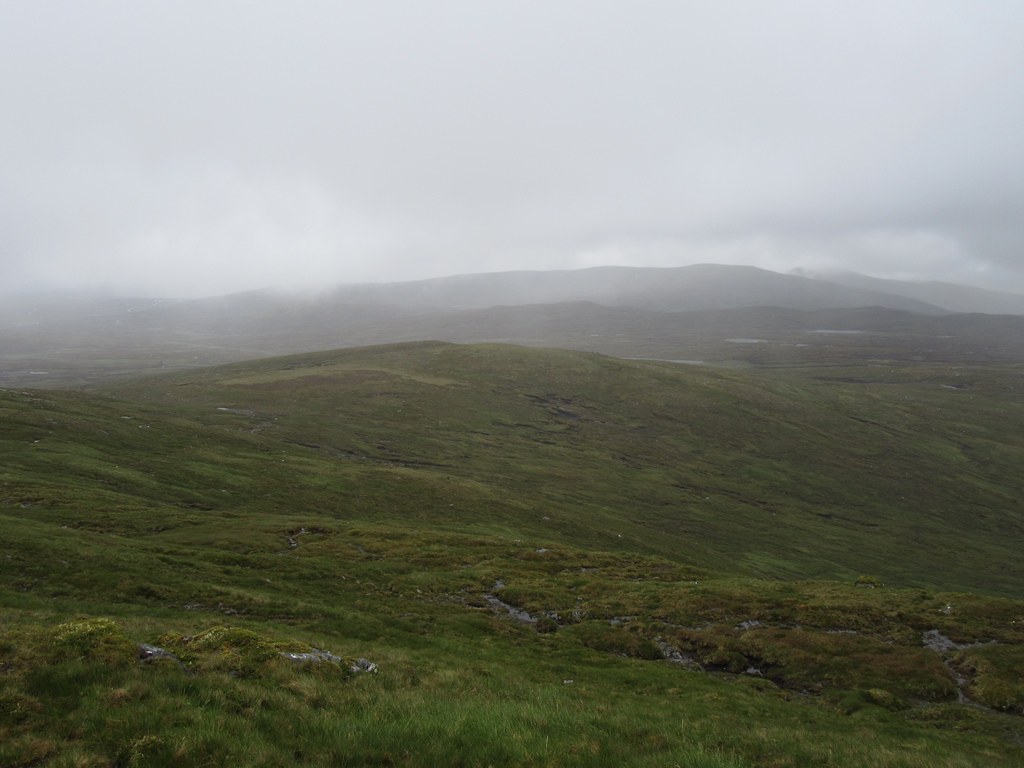 Gairbeinn from the head of Min Choire 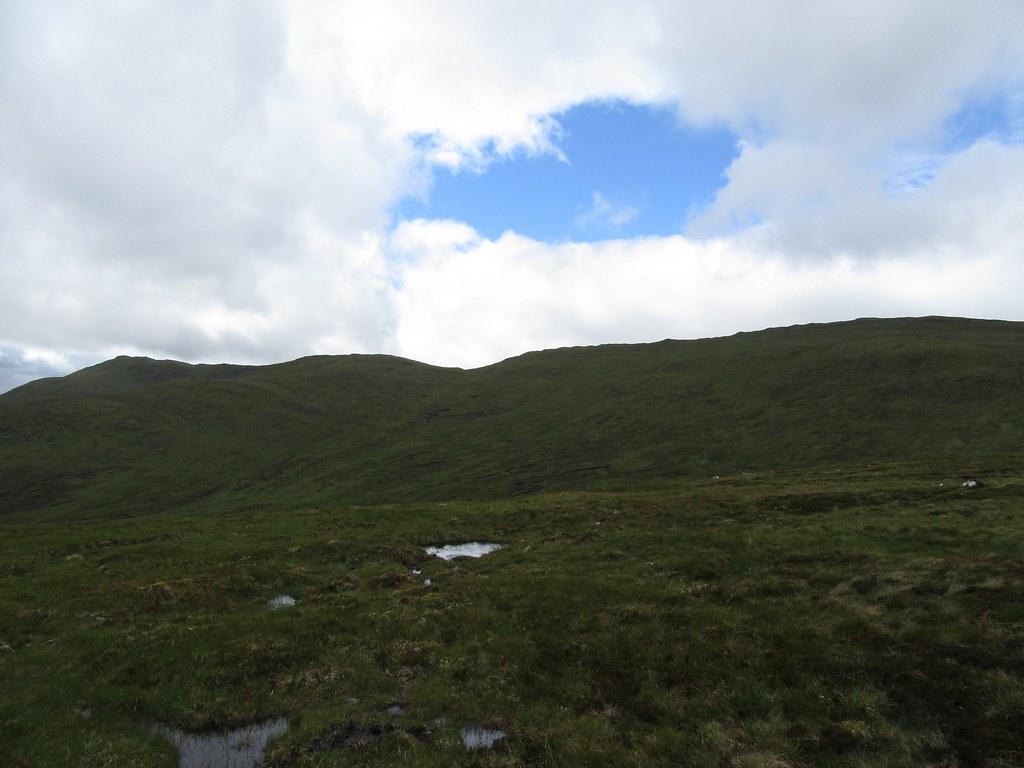 The head of Min Choire 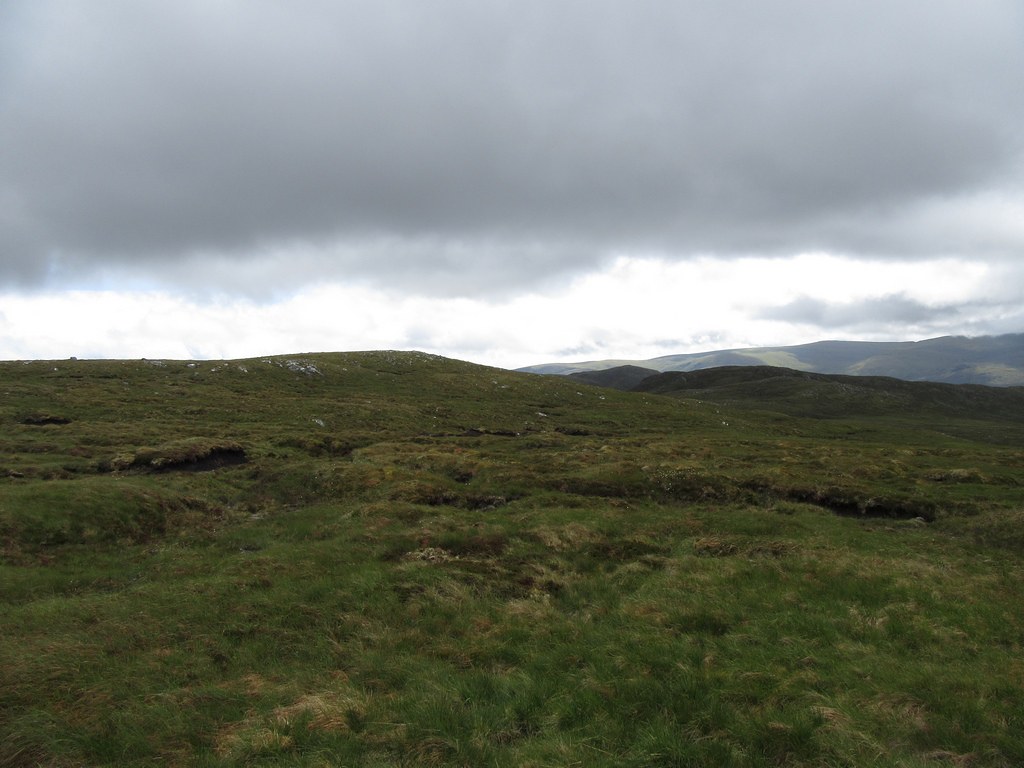 We now turned northeast towards the source of the Allt Gilbe, but quickly encountered numerous peat hags. Although the peat wasn’t water-logged, only a few patches were firm enough to walk on, and therefore we tried to keep to the higher ground of the knolls to the southeast of Dubh Lochan.

Peat hags at the head of Allt Gilbe 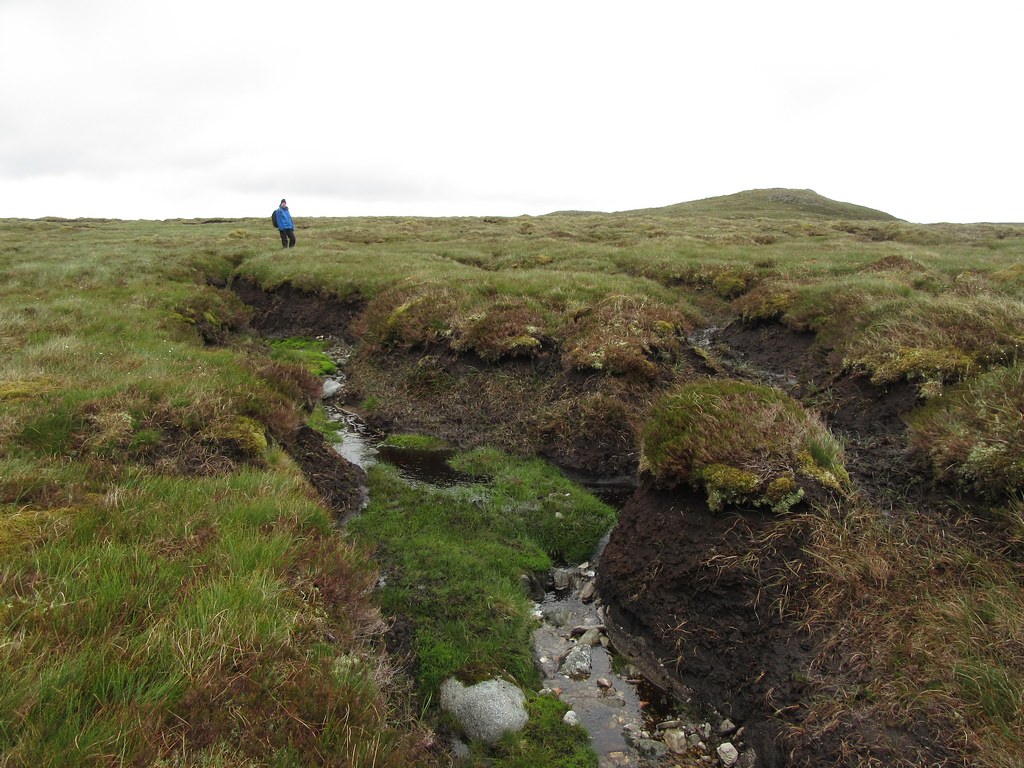 From the knolls, Meall na h-Aisre at last appeared closer, but the route across the head of Coire Iain Oig didn’t look particularly inviting. 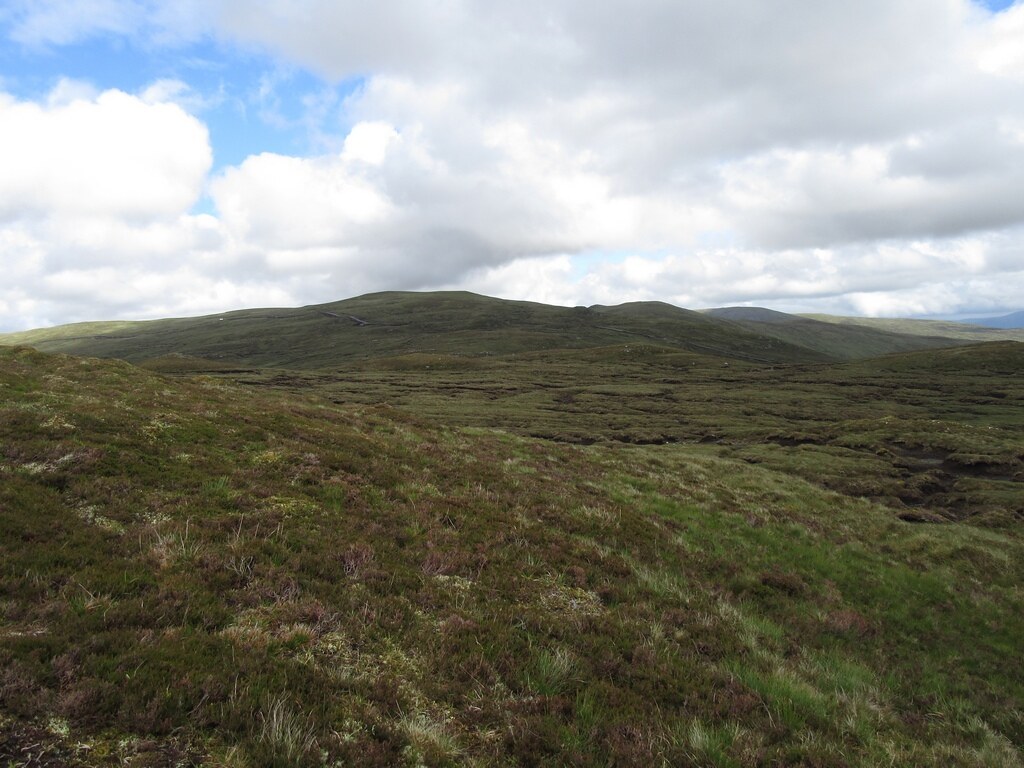 Again, we tried to stick to the higher ground, but the terrain was so riddled with peat hags that it was inevitable that we weaved a highly sinuous course. 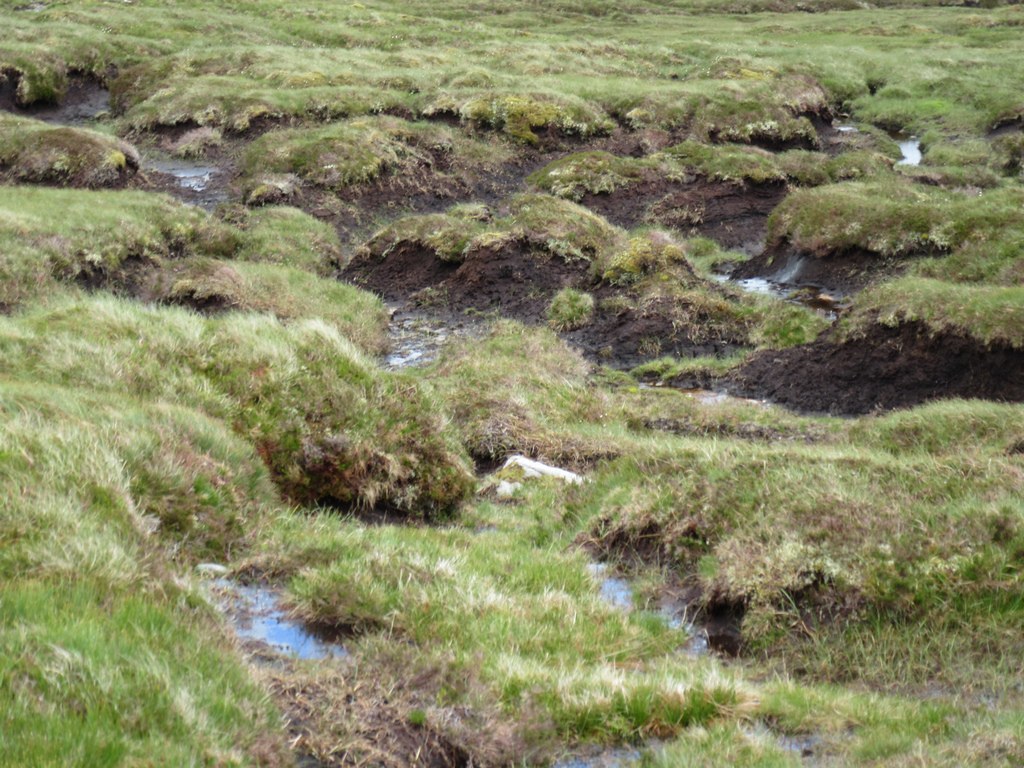 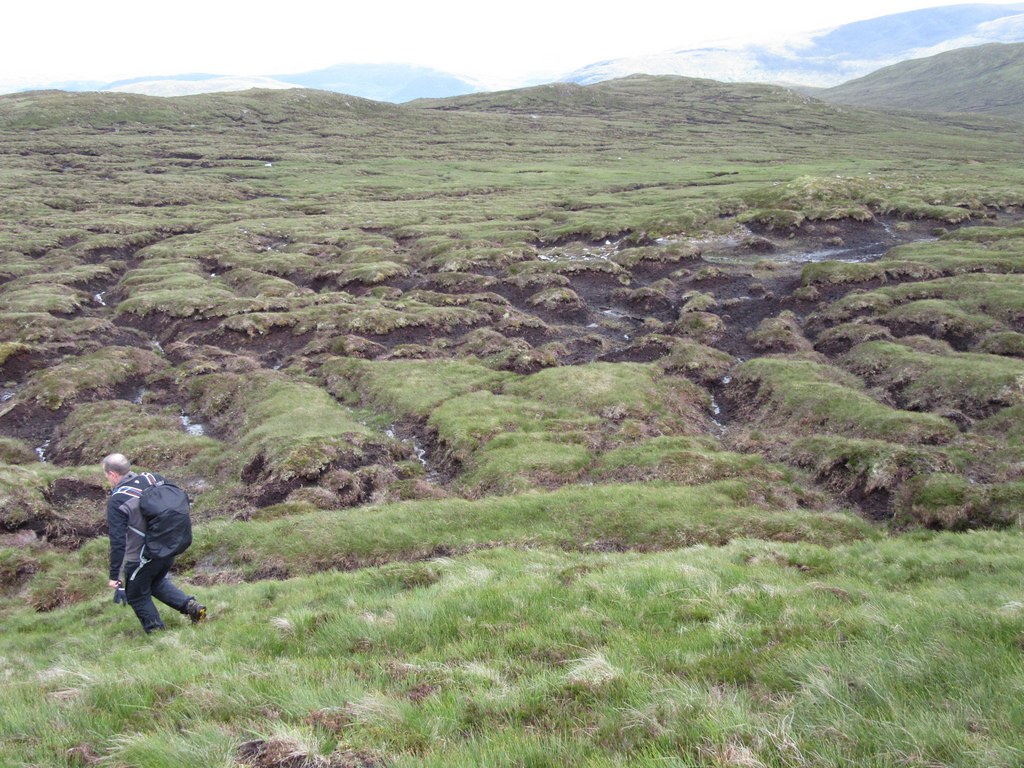 Having negotiated the hags, the final obstacle was the flat ground – probably formerly the bed of a lochan - around NH503000. In wet conditions this would be a particularly soggy stretch, but today, thankfully, we emerged unscathed.

As we’d approached Meall na h-Aisre we had noticed the line of a new road cutting across the western flank of the hill. The road has been constructed in order to lay electricity cables underground from the Stronelairg Windfarm to the new Melgarve sub-station on the Beauly-Denny power line in the Spey Valley. 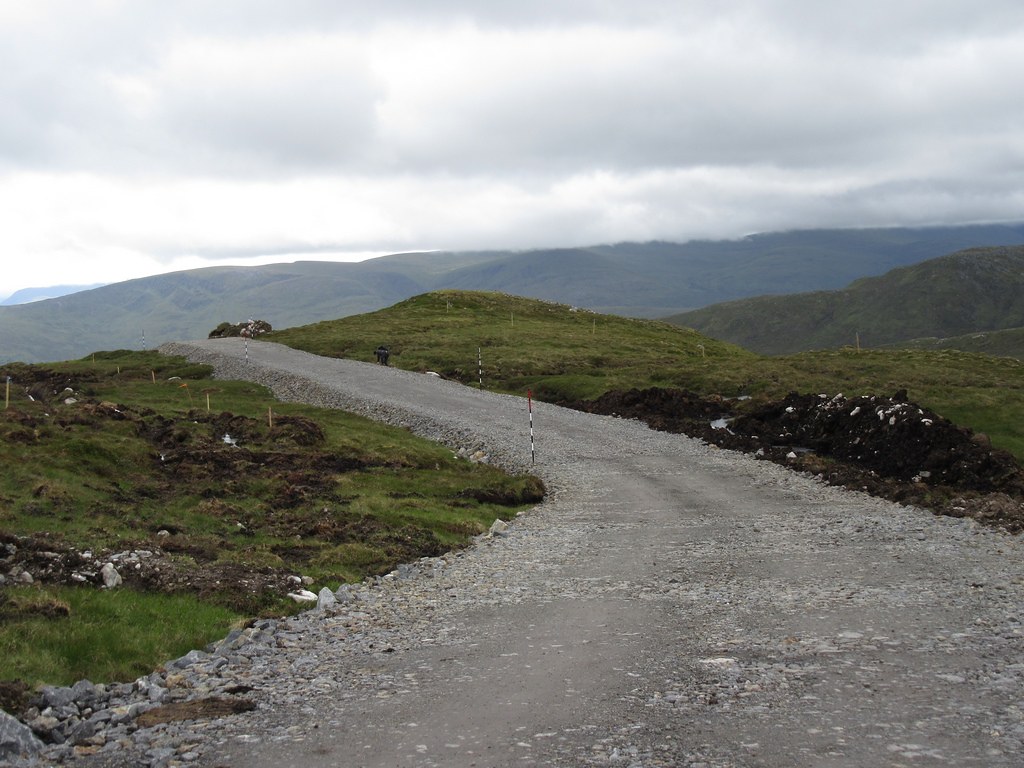 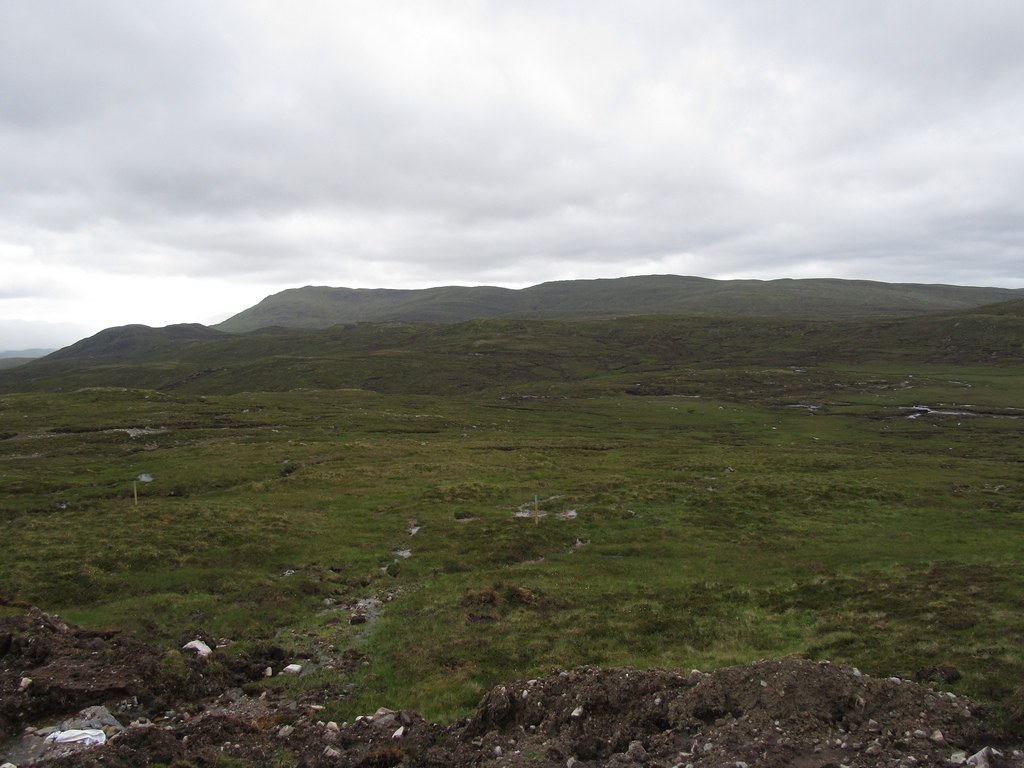 It was now just a short, easy haul to the top of Meall na h-Aisre, sporting a trig point and a solar-powered generator. Several dunlin flitted swiftly across the moorland, and golden plovers were heard but not seen. 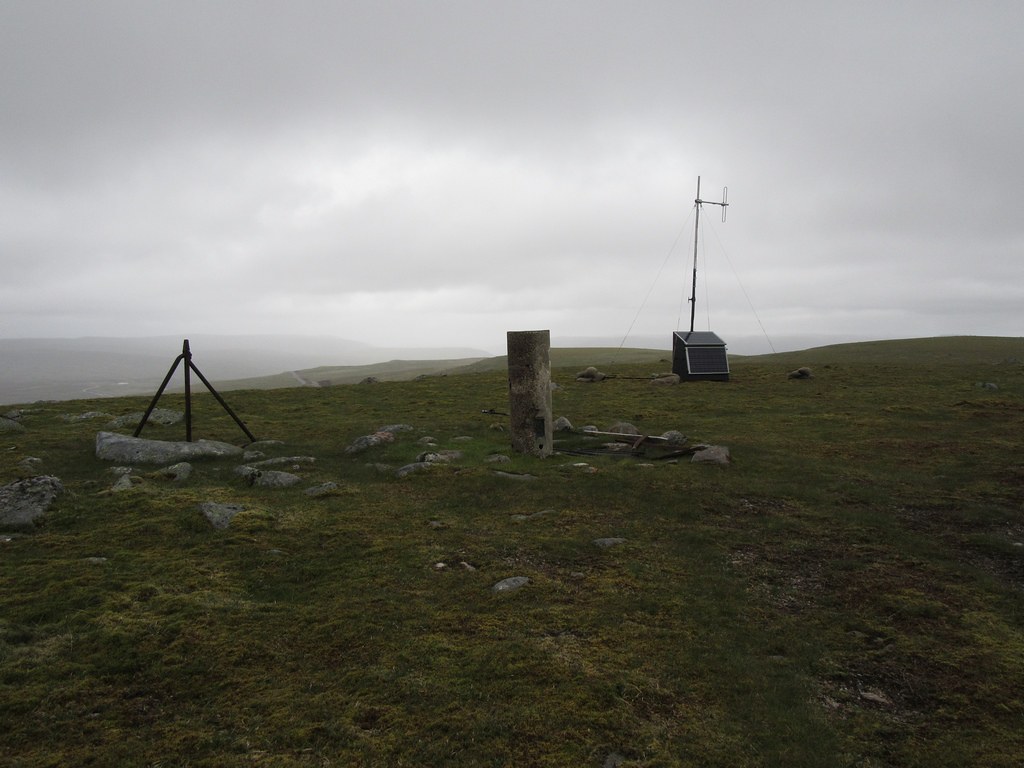 A more persistent rain shower now battered us. We had been intending to return to Melgarve by retracing our outward route across Coire Iain Oig and the Allt Gilbe, and then descending the Allt Feithe a’ Mhoraire. However, given the nature of the ground (at least as far as the Allt Gilbe), the strengthening westerly wind and rain we decided that we would simply use the new cable road to drop down into the Spey Valley. Although we didn’t know where the cable road would emerge in the valley, we were prepared to face a walk back up the valley road to Melgarve, rather than endure the torture of recrossing the peat hags and bogs into a headwind.

The descent along the cable road was straightforward; this ran down the southwest slopes of Meall na h-Aisre, before following the south bank of the Allt Coire Iain Oig, and eventually traversing above forestry to reach the construction site camp at about NN507956. Today there was no-one around the camp, but on a weekday it is possible that access via the road might be denied on H&S grounds. 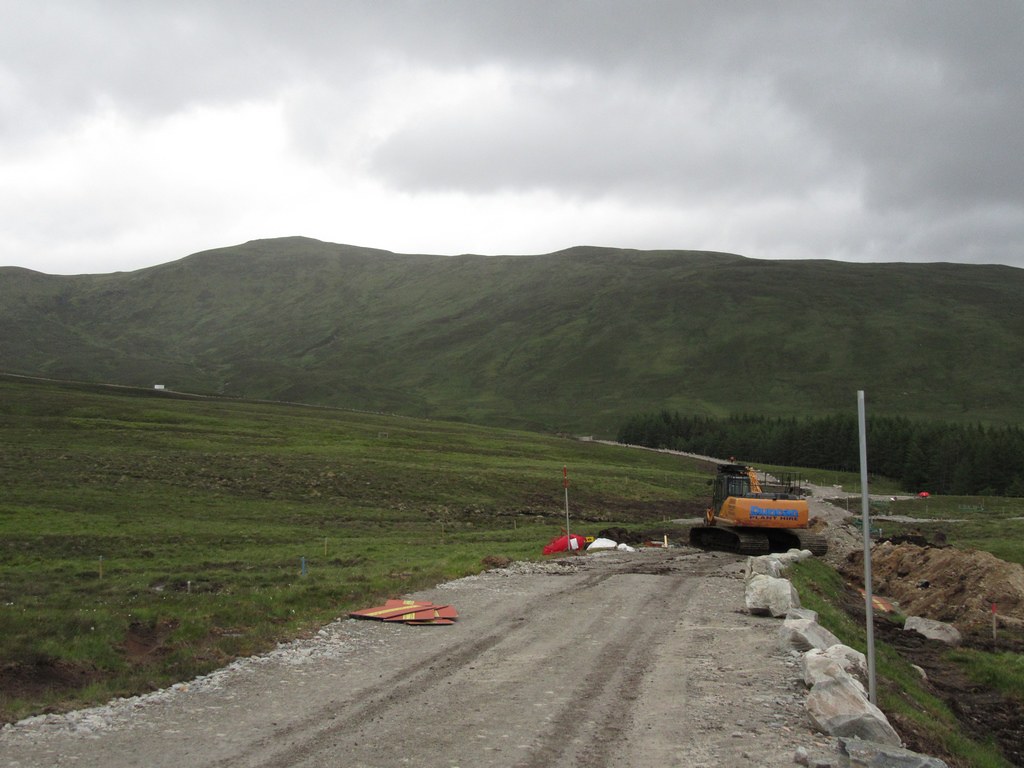 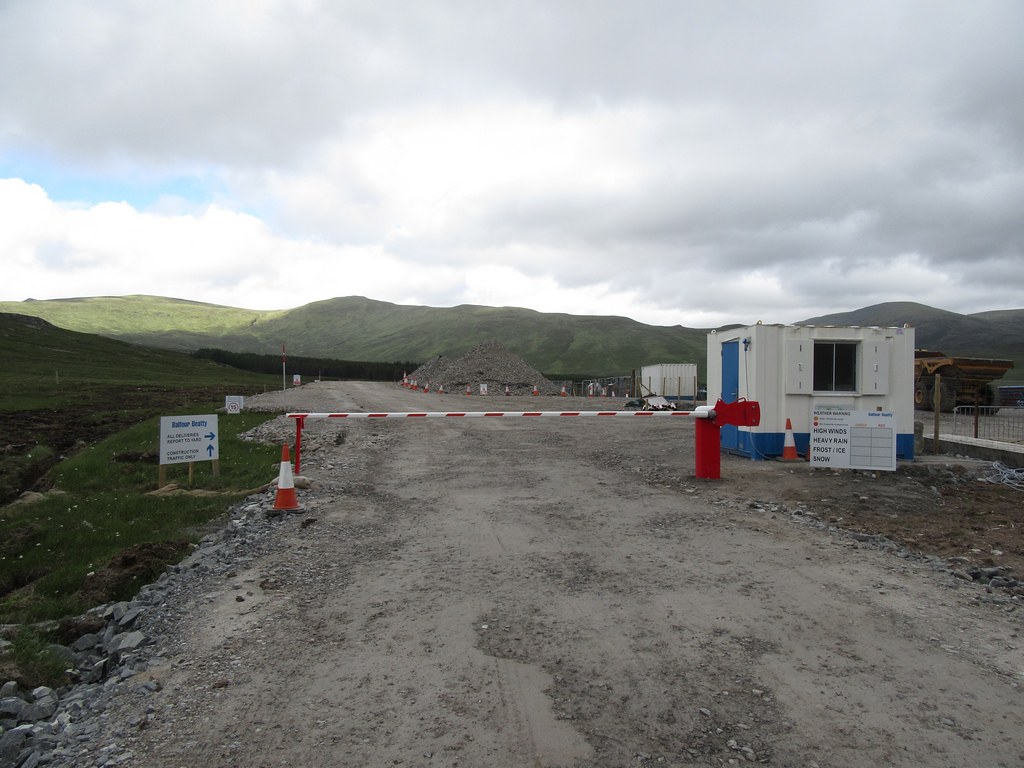 We now followed a site road to the fenced boundary of the new Melgarve substation at about NN504955, from where it was only a few yards to the valley road. 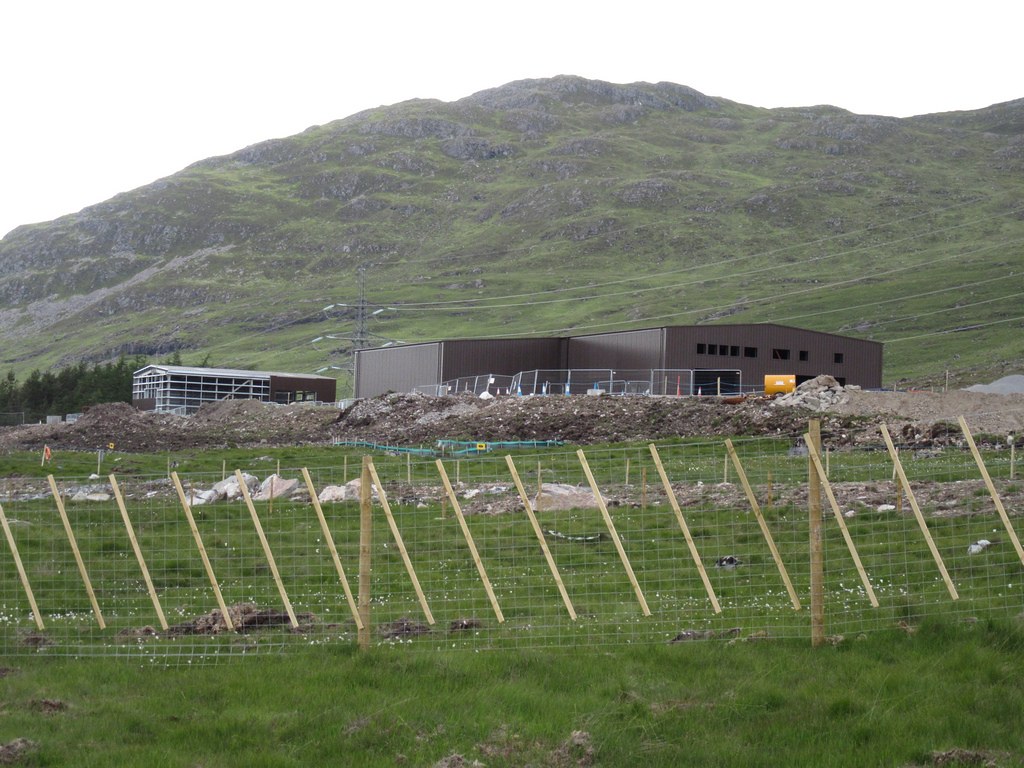 It was about 2.5 miles back to the car. However we had only walked a short way when a vehicle came up the road: we thumbed it down and the couple inside kindly offered us a lift. Using the cable road had proved a good move given the conditions.

The traverse between the Corbetts hadn’t been as bad as I had expected, but it was still fairly tortuous, especially the eastern half. If the ground had been wetter, or in very poor visibility, then I could easily imagine it would be a bit of a nightmare.

The new cable road also provides a quick, easy means of climbing / descending Meall na h-Aisre, although access during the construction work may not always be possible.
Click to mark this as a great report. Register or Login free to be able to rate and comment on reports (as well as access 1:25000 mapping).