After the previous day’s (one-fifth failed) mission, and another camp inside the car, I had been wondering why I’d woken up feeling so cold through the night. That was until I peeled my stinging and heavy eyes open, when morning light had begun to slither through the windows, to discover that the car had actually iced over. If that doesn’t tell you how much the temperature had dropped overnight and give explanation for some teeth chattering and the rushed meal before bed the night before, then I don’t know what will.

The car was absolutely freezing outside the sleeping bags, and we popped the engine on to get the heat moving round the car and windows defrosted. Scott slept through this, and I remained in my sleeping bag the entire time. I could not believe how cold I felt. I knew we’d have to make a go for it to the start of today’s walk as we were (again) combining two separate recommended day walks into the one. Unable to face the cold, I unzipped and pulled my sleeping bag up to allow my legs and feet to move freely, bringing my arms out of the bag while keeping my sleeping bag securely round my torso for extra heat and drove round to the start point. Thankfully by the time we had arrived, the car was toasty warm and Scott woke up as we pulled into the car park. There was some delay and some discussion about how cold and tired we both were, which could have easily turned into a ‘will we just leave this today…’ discussion but I knew that idea should in no way be put forward by me after the previous day’s actions of missing out a Munro.

Quickly getting changed and packing our bags up, it was time to brace the cold and take on today’s climbs – Beinn Fhada and A’ Ghlas-bheinn. We were layered up, protecting all but our faces from the biting chill that lingered in the air and set off along the road from the car park at 8am. We’d walked this small section of road previously during our time on the Affric-Kintail way, but I don’t remember this feeling quite as long as it did that morning. Instead of continuing through towards Glen Affric, the road curves left through Morvich past some scattered houses. One house was particularly alluring, with quirky signs and items gathered out with a magical-feeling tree upon which sat a small wooden shelf that had been built on purpose for the black cat that was perched upon it, and, below that, free range chickens bobbed around. Now that’s a little life I could see myself living!

After some pictures of the cat and chickens, we followed the path and onto the track through the field. After many horror stories about cows, this is something I’m always particularly wary of but we were all good as the cows were nowhere to be seen. You reach a kissing gate at the other side of the field, and meet a good stalkers path which is framed with vegetation on either side and follows the Abhainn Chonaigh. As there is much tree coverage and some steeper drops, most of the water is somewhat out of sight for part of the way until you are a little further up the hillside and the tree line has now disappeared. Soon enough, there are beautiful views onto the waterfalls which cascade down the minor gully. The path then moved away from the Abhain Conaigh, and heads over a stream where there’s some good fords to be crossed. Scott stopped here for some obligatory pictures, as it was beautiful scenery ahead. 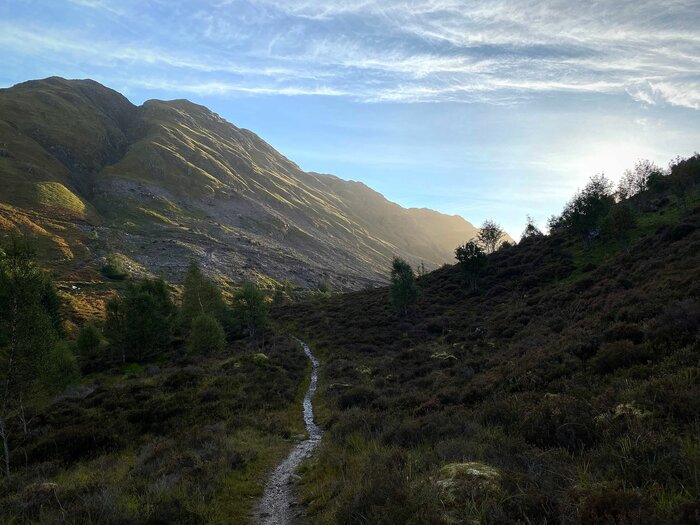 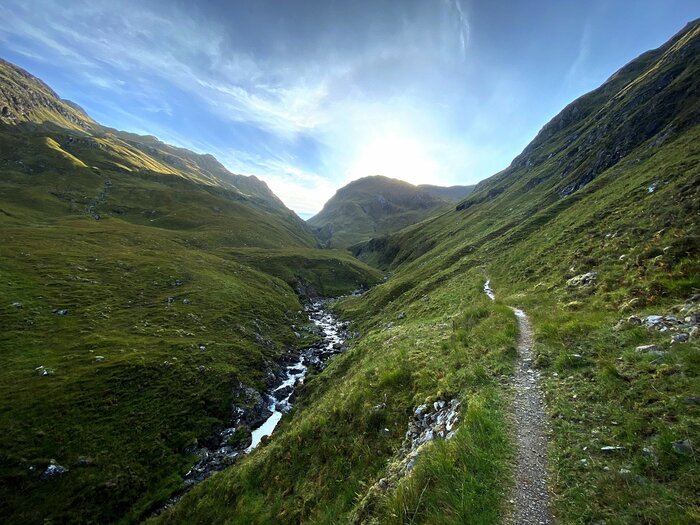 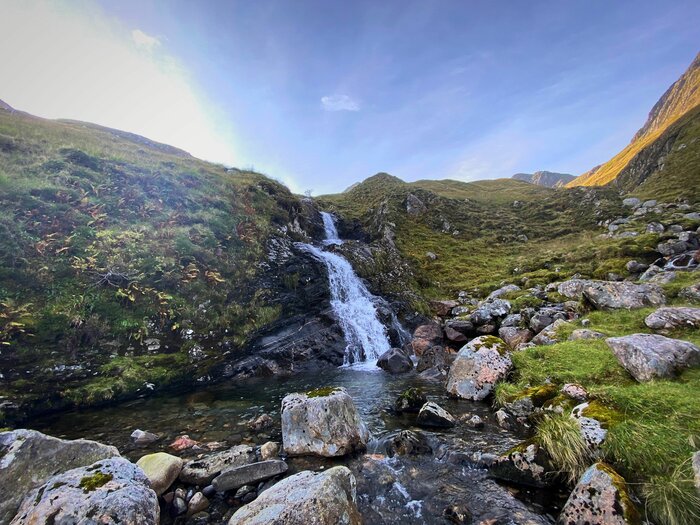 Returning to the path, it zigzags uphill before a cairn marks the division of the route. We followed this to the right, following the path at an easy gradient which contoured around the hillside gaining height gradually up until 500m where the climb begins to steepen. The views from this section are beautiful, with the ridge line of Faradh Nighean Fearchair looking impressive, which meant there were plenty of photographs along the way. You soon arrive on easier ground, in an impressive corrie – Coire an Sgairne, marvellously framing the bowl in which you stand. From this angle, it is easy to wonder how you will reach the plateau towering above these steep crags, but the path hugs the eastern side of the corrie then begins to climb steeply up the sides. At the steepest section, wide zig zags take a heavy load off of legs by tackling these at a much easier incline than heading directly uphill. 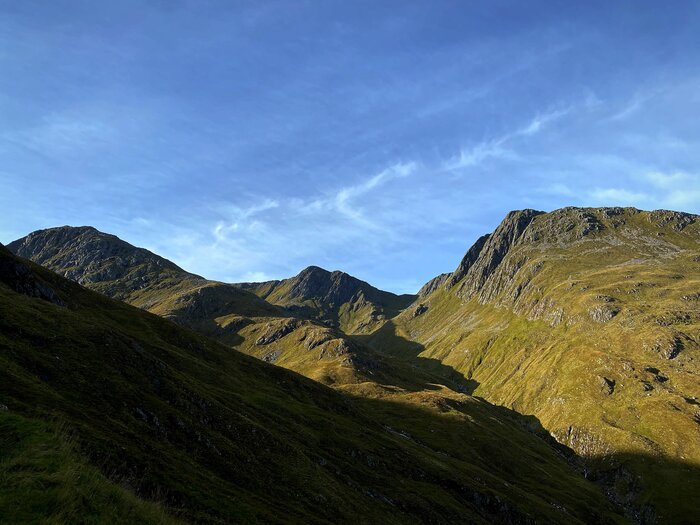 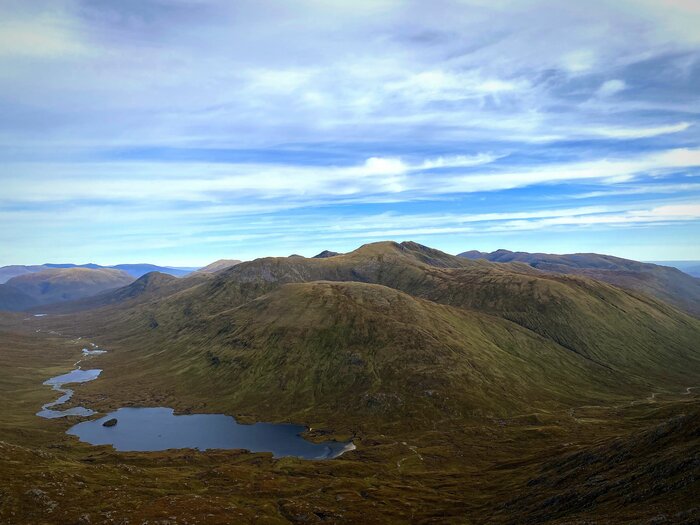 With some relief, you arrive off of the steepest ground to a point at approximately 750m to regain your breath. After the initial ‘thank goodness’ we looked ahead, checked the map and realised that we still had some climbing to do. I might have mentioned before but the steeper slopes are sometimes my preference as they get the hard bit over and done with, compared to the easy gradients which are a never-ending slog at times. Initially we had followed the path which hangs tightly to the top of the crags but soon discovered that we should have been following the ridge as this was taking us away from the summit. We began moving south and soon came across some wet ground, which I’m guessing will be the stream marked on the OS map, which was frozen over with some fairly slippery ice covering the ground at times. With good visibility we followed to the highest ground over some minor boulder sections which led to a good path, leading us directly to the summit, which we reached at 11.50. The summit had extensive views in all directions with Scott uttering the words ‘I think this is the most amount of mountains I’ve seen from one summit before’. Every direction had towering peaks, Brothers and Sisters of Kintail, Glen Affric and the Mullardoch Munros, Skye, Forcan Ridge… the list goes on. The cool temperatures meant that there was a lack of humidity and no haze obscuring the landscape which our eyes feasted upon. 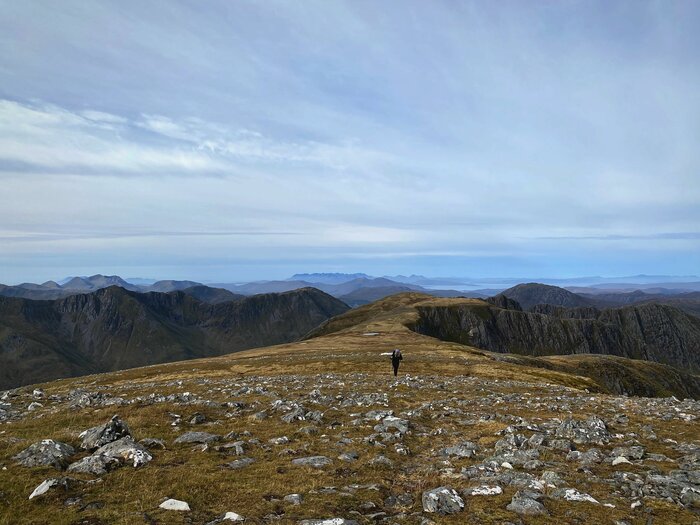 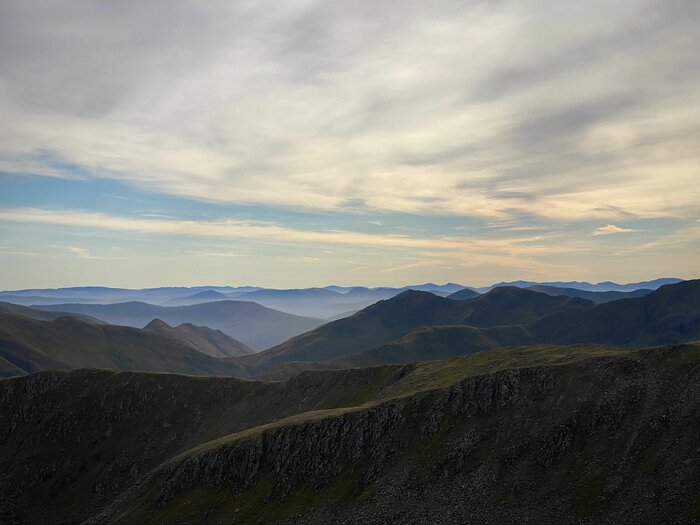 After eating and enjoying the wide-ranging views for 25 minutes, we decided to move on as cold temperatures and sweat just don’t mix particularly well so it was time to get some heat. We followed the path we’d taken on the way up back down to the cairn to the other path which headed up Bealach an Sgairne. At the top of the pass is a huge cairn where we stopped for a moment to appreciate the beautiful Gleann Gaorsaic with its sparkling lochans, on one of which an island of lush trees sat upon. As we sat here, the roar of the deer came alive once more and the present moment became captivating. It was a tough decision to pull myself away from that moment and onto the next, which involved another climb, but I knew it was best to get on with the day. 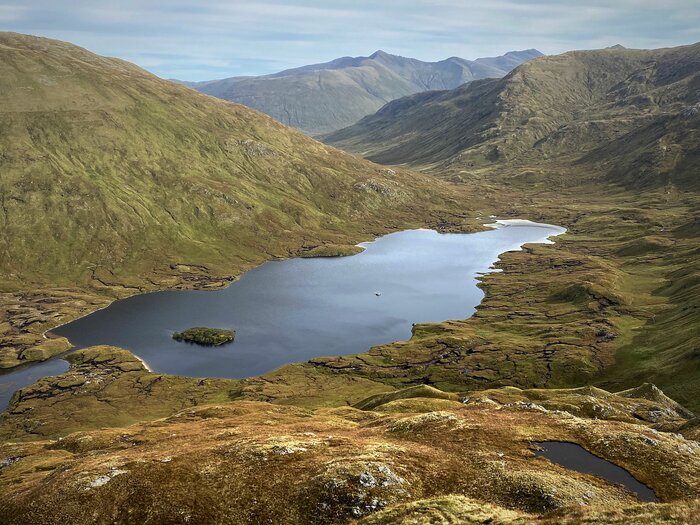 The path follows a steep ridge, winding its way up and over crags which gives this hill excellent character with some enjoyable mild scrambling (for wee legs anyway!). Once up and over a couple of rocky knolls, you do get periods of respite before tacking the next inclination of the ridge. This continues throughout, and its little characteristic climb was reminiscent of Ben Vane, albeit with a bit more mountainous surroundings. With climbs of this nature, it’s a given there is bound to be a false summit or two… or several in this case. From around the 806m mark, the false summits just keep appearing until eventually the cairn was reached at 3.35pm and my bag was flung down with a ‘Thank God!!!’. Scott was already at the top, taking pictures and ready to enjoy some Irn-Bru. The views out toward Skye were undisrupted, which for some reason always feels really exciting! The Cuillins stretched out before our eyes, before realising we were able to see the Skye bridge from the Kyle of Lochalsh and how close the lowlands of Skye seemed. 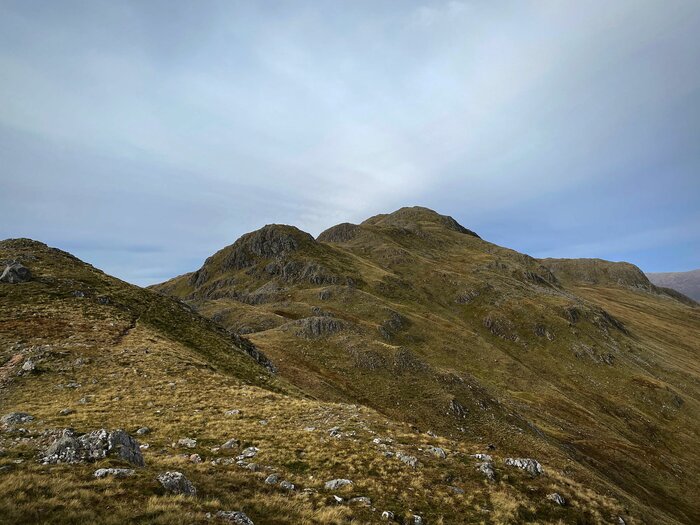 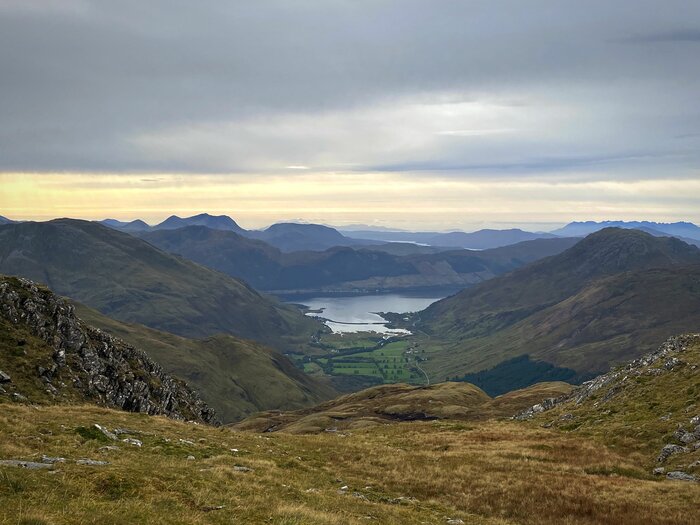 After a while, a compass bearing was taken and we followed this down the northern slopes. During the descent, I’d arrived at a minor rocky knoll and I had wondered ‘what on earth has happened to this ground here, it looks as though someone has dug it up in strange forms’ before realising that the zigging patterns and smashed rocks were evidence of a lightening strike! Seeing the sheer scale of how the rocks had been split into two, and seeing the way the current had clearly travelled along the ground, it was a very real reminder that this high ground is absolutely not the place you’d want to be in a storm and that the dangers of nature on earth, a connection with humans have managed to sever, can pose a very real threat. Scott was too far ahead for me to show him, so I settled excitedly for some pictures before continuing down the hill. 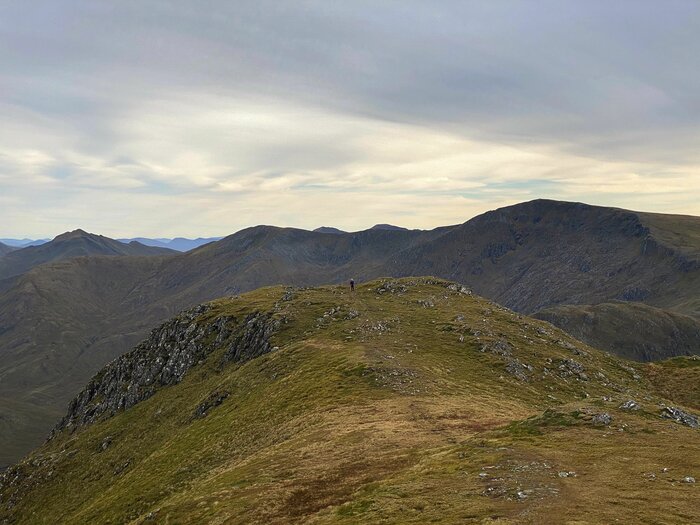 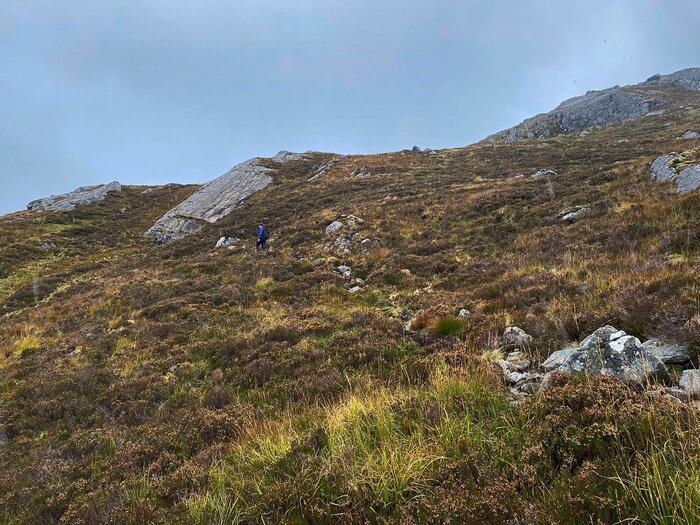 The path soon faded and we were on too-familiar boggy ground avoiding slips and falls as we went. Having to check the map repeatedly to avoid wandering into steep craggy ground, we opted to take the easier looking route which went slightly more west to the fork in the path towards Falls of Glomach, but this turned out to be an extremely wet and slippery descent route. We had full intentions of heading around to see what are named the finest falls in Scotland, but by the time we had reached the path we’d decided to avoid any extra time being added on and to begin the return to the car. The Bealach na Sroine path is an excellent vehicle track which makes for fast going down the glen towards a gate. At this point, my memory is quite hazy as it was so long ago, other than we continued onwards towards a field which we then cut through. An old derelict building sat in the field, and the usual thought passed through ‘it’s a shame they’ve not kept the upkeep to make this a bothy!’. Scott pottered around for some pictures, and we headed into a tree-covered section of the field with a footpath heading down towards the Abhain Chonaig. It was a lovely section of path, and an adorable footbridge taking us out to a faint path across the field to the original inward-route to Beinn Fhadha that morning. The walk from here felt substantially longer than the walk in had taken, so the sheer appreciation at arriving at the car is one that shan’t be forgotten in a hurry! Boots off, a change of clothes, fluffy socks and Squashies at the ready, the key was turned in the ignition and the 4 hour journey back to Glasgow was under way.

9 Fannichs and the conditions of a lifetime

Up in the clouds on the Creag Pitridh round