This is a nice quiet walk south of the A4212, although rather boggy over most of the route. I started at a track that comes off a minor road signposted to Arenig, just after some electric cables on pylons cross the road. The day included adjacent Nuttalls with the Hewitts giving 6 summits altogether. I've tried to put the route on a map with the route editor facility, but the mapping doesn't seem to want to load

Briefly, the route follows the track until you reach a wall after just over a km, then you head straight up the wall/fence line to Arenig Fawr. The way off to the south is obvious, going over a Nuttall then down to a boggy plateau on which sits another Nuttall next to some small pools. The col between here and Moel Llyfnant is bog, good and proper; I tried the direct approach and had to return to take a line more to the NW in order to keep dry feet. Once through there's a short climb up grassy slopes to Moel Llyfnant. Gallt y Daren and Foel Boeth both looked a long way off from here, but in reality it wasn't too bad, although the going was a little boggy, with care needed in placing ones feet to avoid the occasional channel that was obscured by vegetation. After those last two it was the case of following very wet ground along a fence across first Bwlch y Bi then over Moel y Slates. I recalled the Nuttalls' book suggesting a descent along Nant y Gist-faen, but considering the conditions underfoot I chose to stay on the high ground until nearly at Penllyn Forest, then descend to where the Nant y Gist-faen crosses the old rail bed, where a stile allows access to a permissive path along the route of the old rail. Just prior to reaching this I'd be thinking how well I'd done in keeping dry feet, and of course at this point I got a boot full. The old rail bed looked like a nice easy walk back to the car, but even this turned into bog within the some of the sections of cutting. Further along this rail line meets the track on which I started.

Despite the bog, it was a good day out. But if you're thinking of doing it then it would be best after a dry spell, or after hard frost. Looking down the route up Arenig Fawr 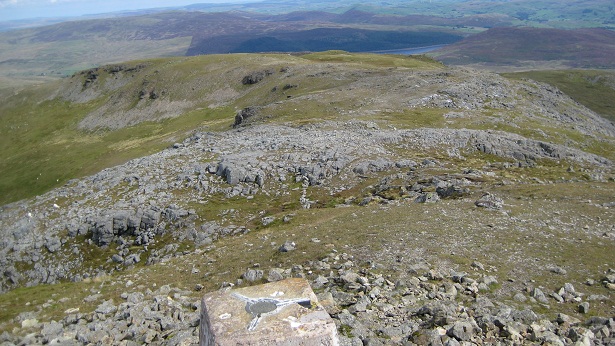 The top of Arenig Fawr looking down the final approach The way off to the south Moel Llyfnant several kilometres away with the outline of the Rhinogs (I think) behind. Foel Boeth and Gallt y Daren around 3Km away from the top of Moel Llyfnant. Looking back from somewhere near the last hill to the hills crossed earlier in the day. The way back across Bwlch y Bi. The old rail bed that leads back to near the start. This is an unusually dry section.