I have always lived in England, but for entire life my heart has been in Scotland.

My dad is Glaswegian and my parents moved up to Edinburgh as soon as I left the nest for University 13 years ago. Before then, childhood holidays were spent camping in Glenbrittle, exploring archaeological sites on Orkney and hunting for Scottish wild cats through the forests of Strathconnon. I was carried up Cairn Gorm aged 2, before I could walk. I climbed Schielhallion and Beinn Wyvis before my 10th birthday.

As an adult, this love has only grown - every day of annual leave I could manage I have jumped back up North of the border, and spent hours and hours planning trips on public transport (I don't drive) or bribing my dad to save certain munros to be climbed together when I can get up (he is now on his last 30 before compleation).

Until last week, I had not been in Scotland since a few days after Christmas last year - the longest I have gone since I was born. The feeling of being stuck in a city away from the landscape has been visceral. A total gut punch.

With the grand 're-opening of tourism' touted on the 15th July - I quickly managed to book myself a few days in Arrochar for the end of July - much to my dad's dismay who has always had a negative opinion of the area (due to being "too touristy" and every hill he has climbed in the area has been in the rain and the clag).

Last week, I excitedly journeyed up. If you've never caught the train to Arrochar and Tarbet I would highly recommend it. I could feel months of stress and suffocation melting away as the landscape opened up and became more dramatic. Checking the forecast, I noted one day of torrential rain and one day of beautiful sunshine. Desperate to be out, I dragged my partner up Ben Vane on the first day in a month's worth of rainfall - which I actually enjoyed profusely!

Later, while our gear dried out at the cottage we were staying at, we ventured to the pub and with the following day's objective in our sights. 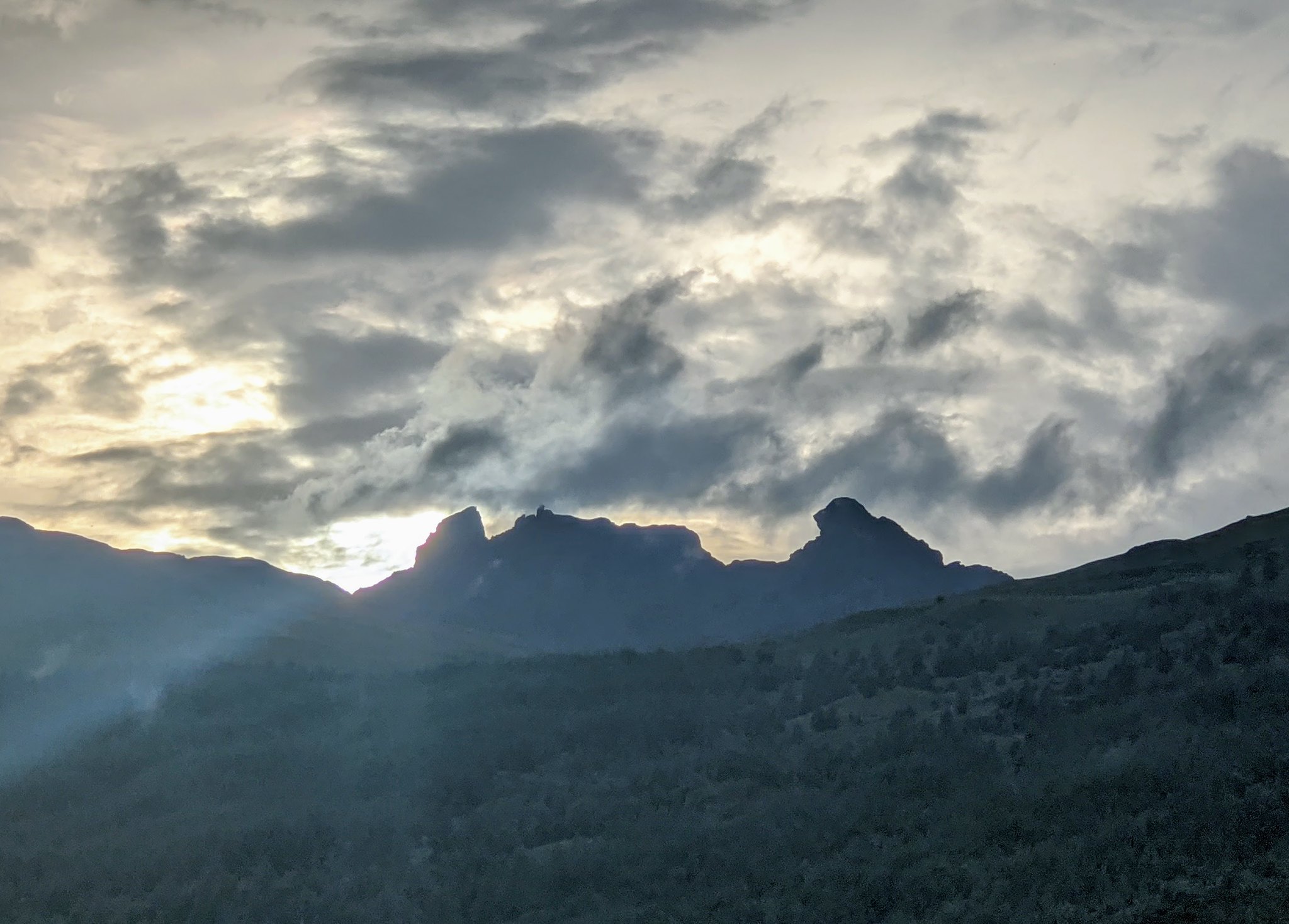 We woke up early to beat the crowds but were also greeted by the news that back home in Manchester was being placed under a partial lockdown which delayed us a fair bit in responding to lots of panicked messages.
Trying to shake the bad news off, we started on our walk at about 7:45am - the car park was already filling up as we walked by.

After endlessly zig zagging through forest, the views opened out. 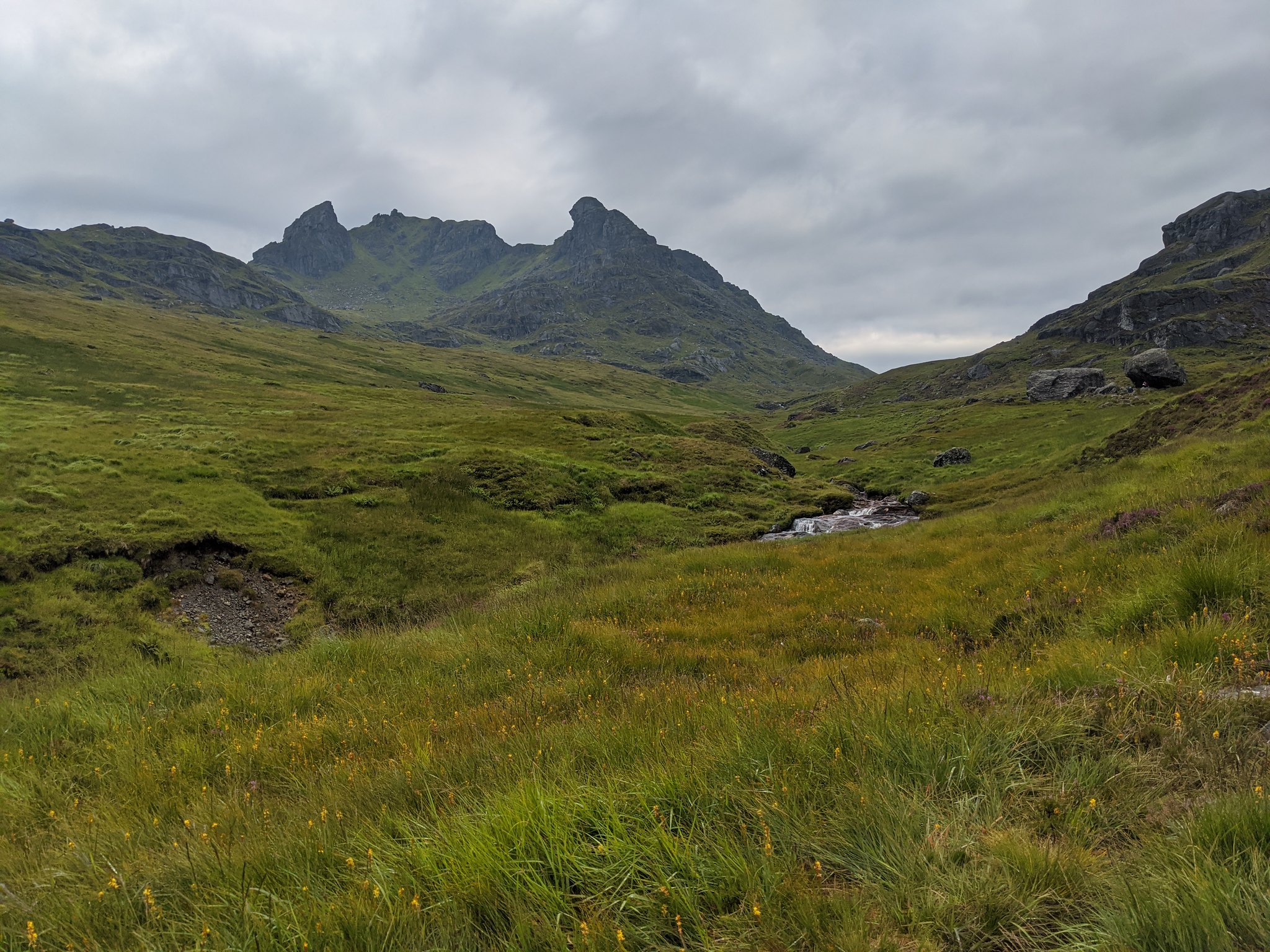 Passing Narnaid boulders, we forked to the left to approach The Cobbler head on, leaving most other early walkers behind us. 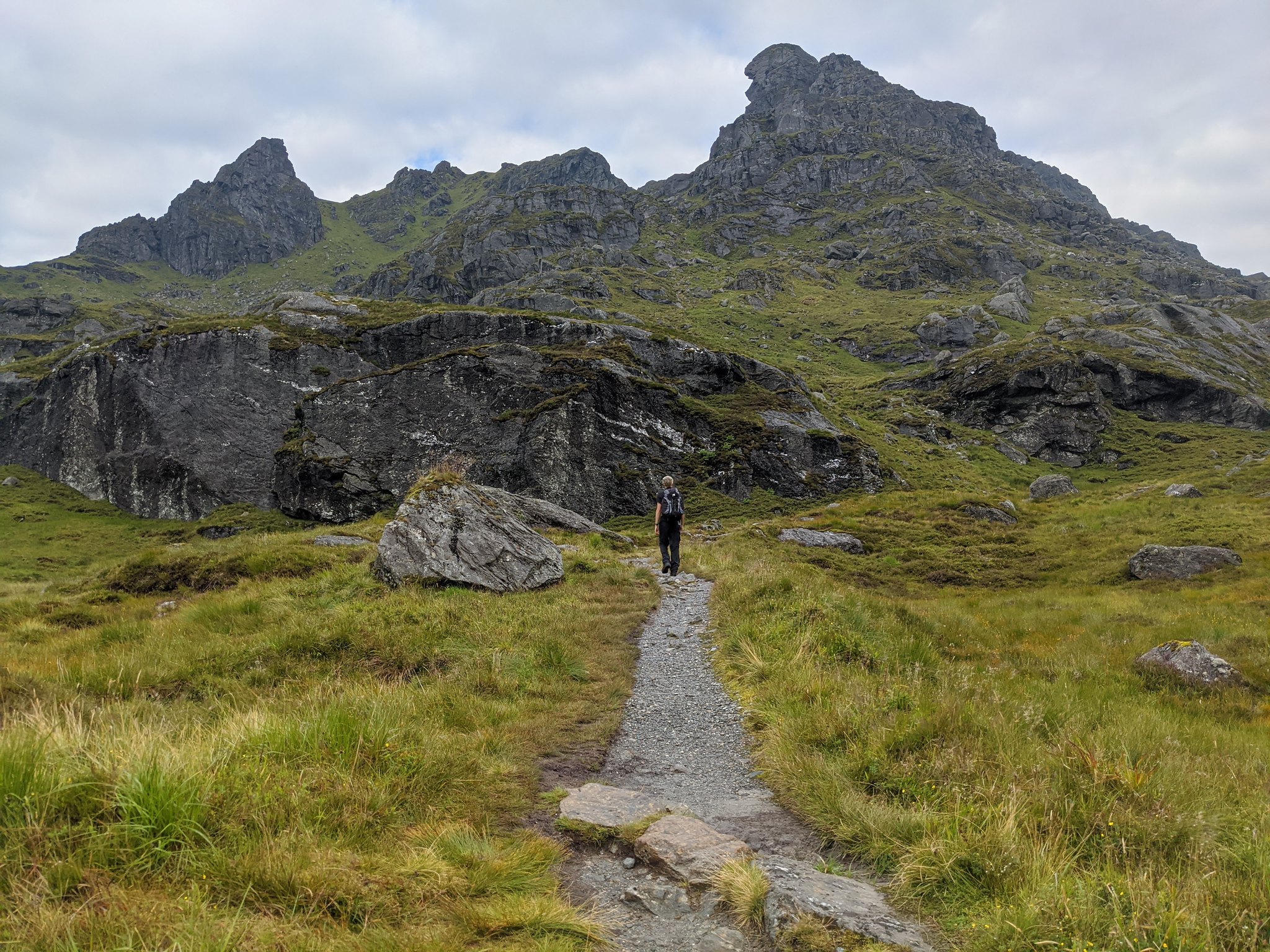 The steepness of this way came very quickly. This is my favourite type of ascent - heartbeat racing, hair sweaty but gaining height rapidly. I stopped for a quick chat (rest) with a couple on their way down who had gone up for sunrise, and were very excited to hear about our full day plans.

The views on the way up were brilliant, both behind us towards Ben Lomond, and at the route ahead. 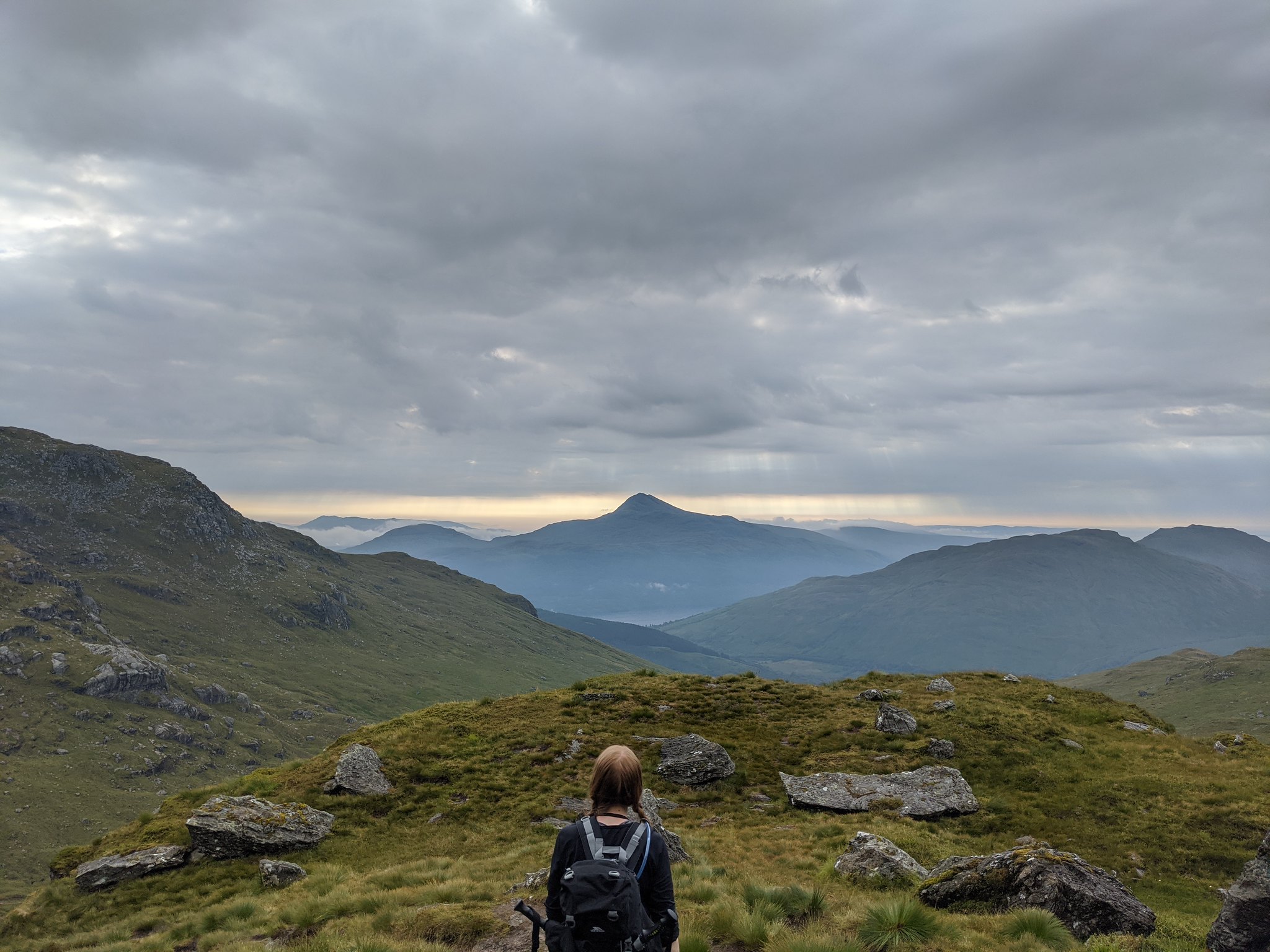 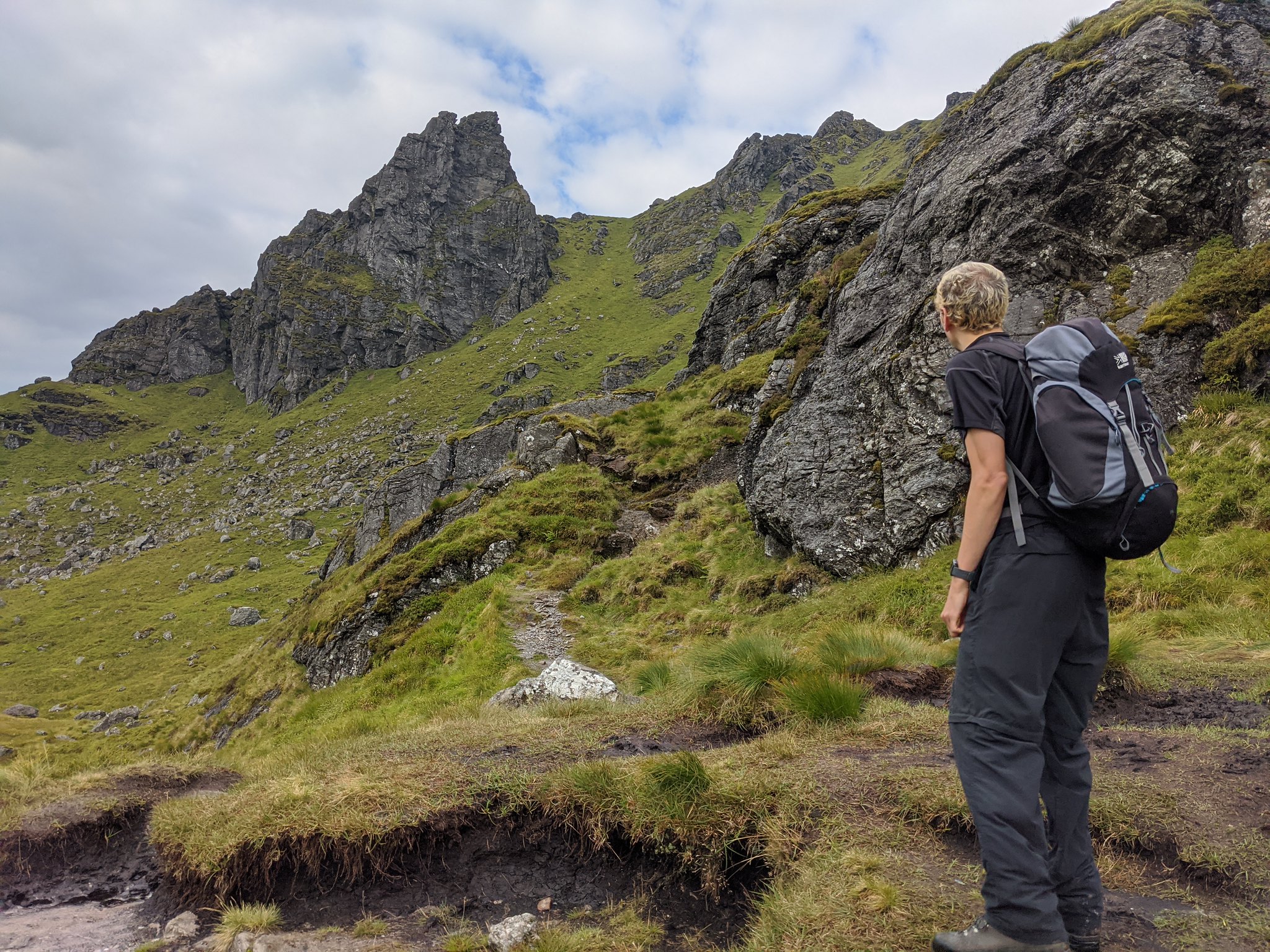 Before we knew it, we were at the top, with only three other people at the summit. 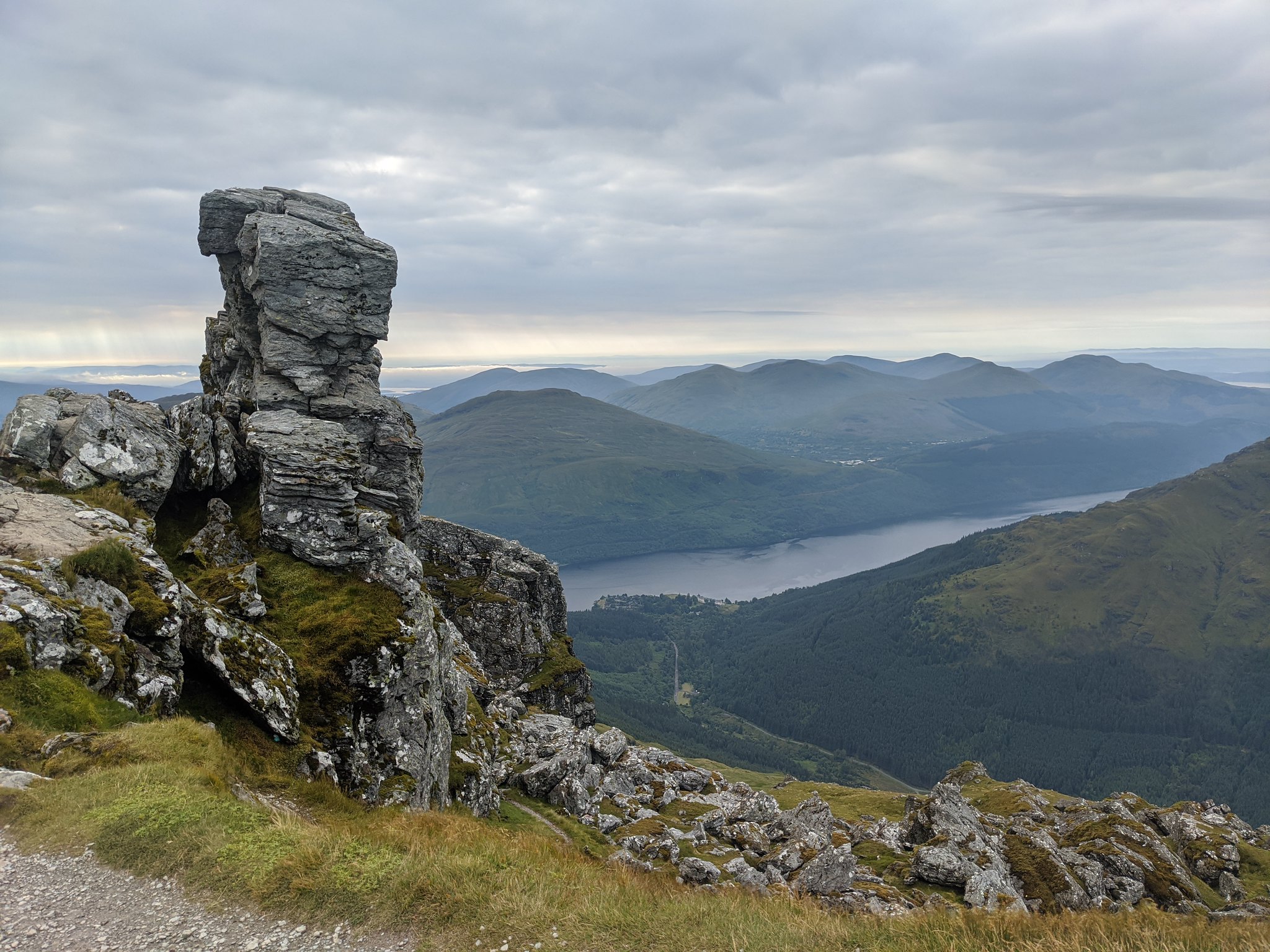 I spent about 10 minutes trying to convince my height-scardey partner to let me thread the needle, but in the end he won. This is as close as I got (if I had only been here with my dad - I would have gotten up there!). 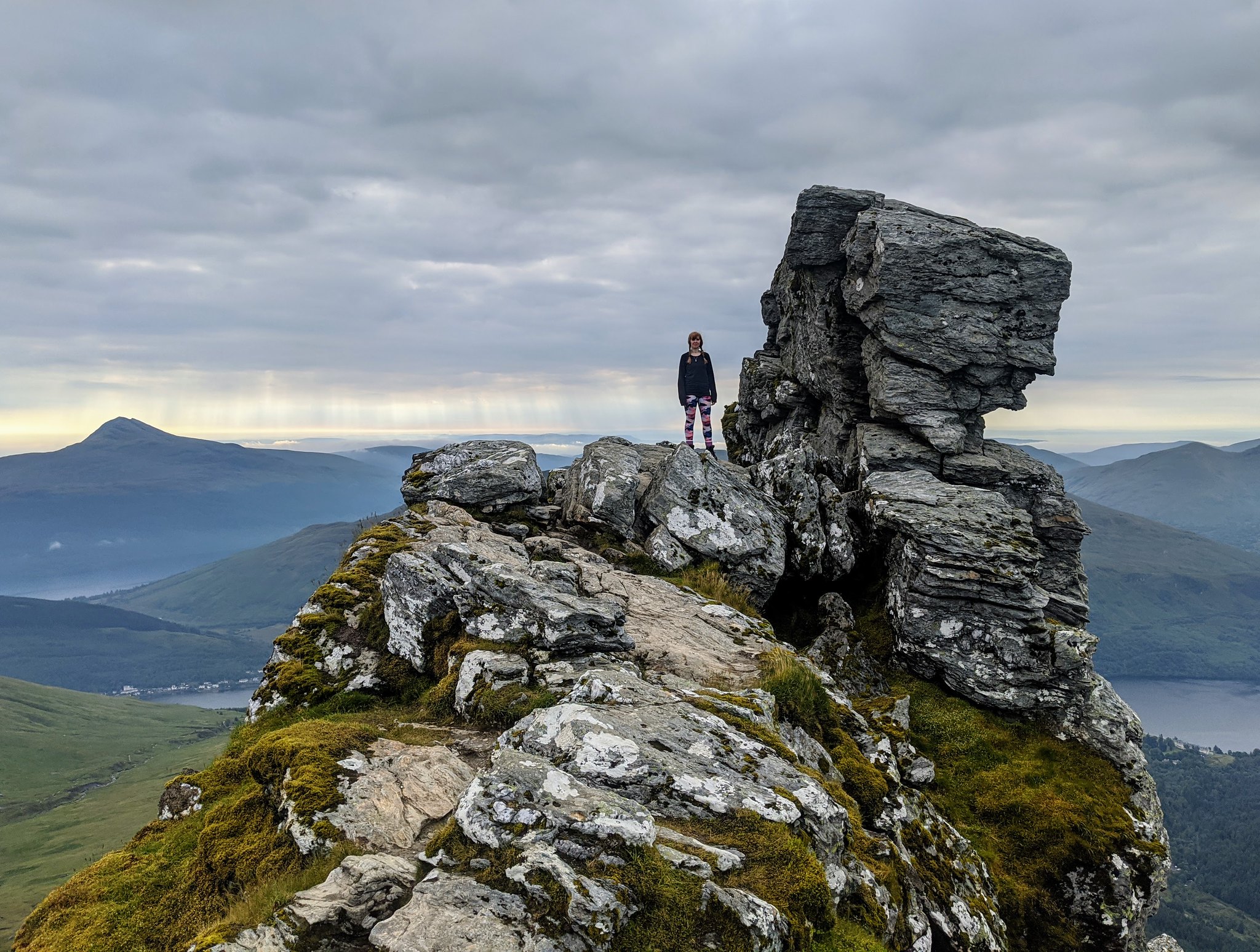 I did, however, take this photo (jealously) for a girl hiking on her own. 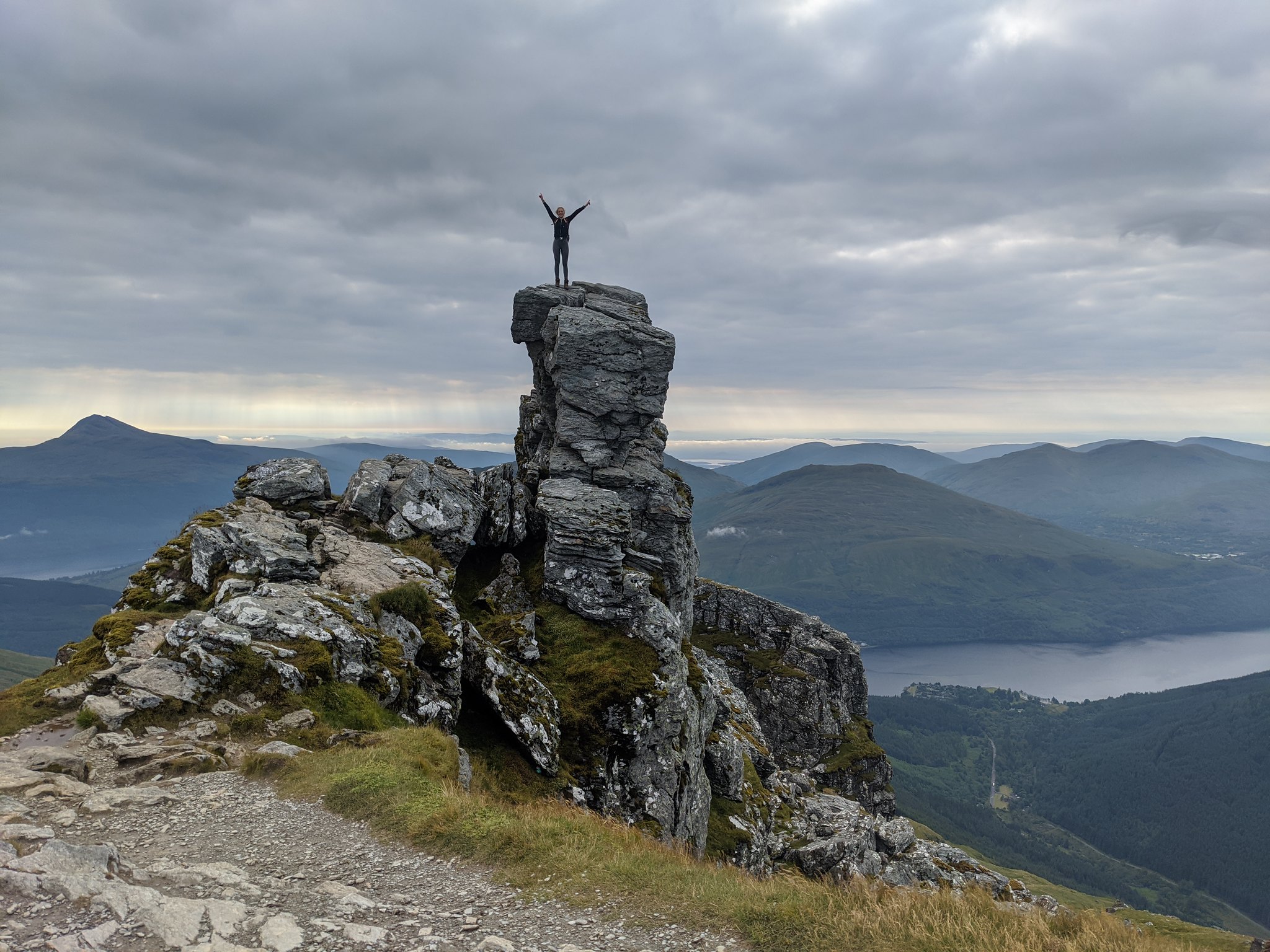 We then moved our attention to the next goal of the day, the big bulk of Beinn Ime 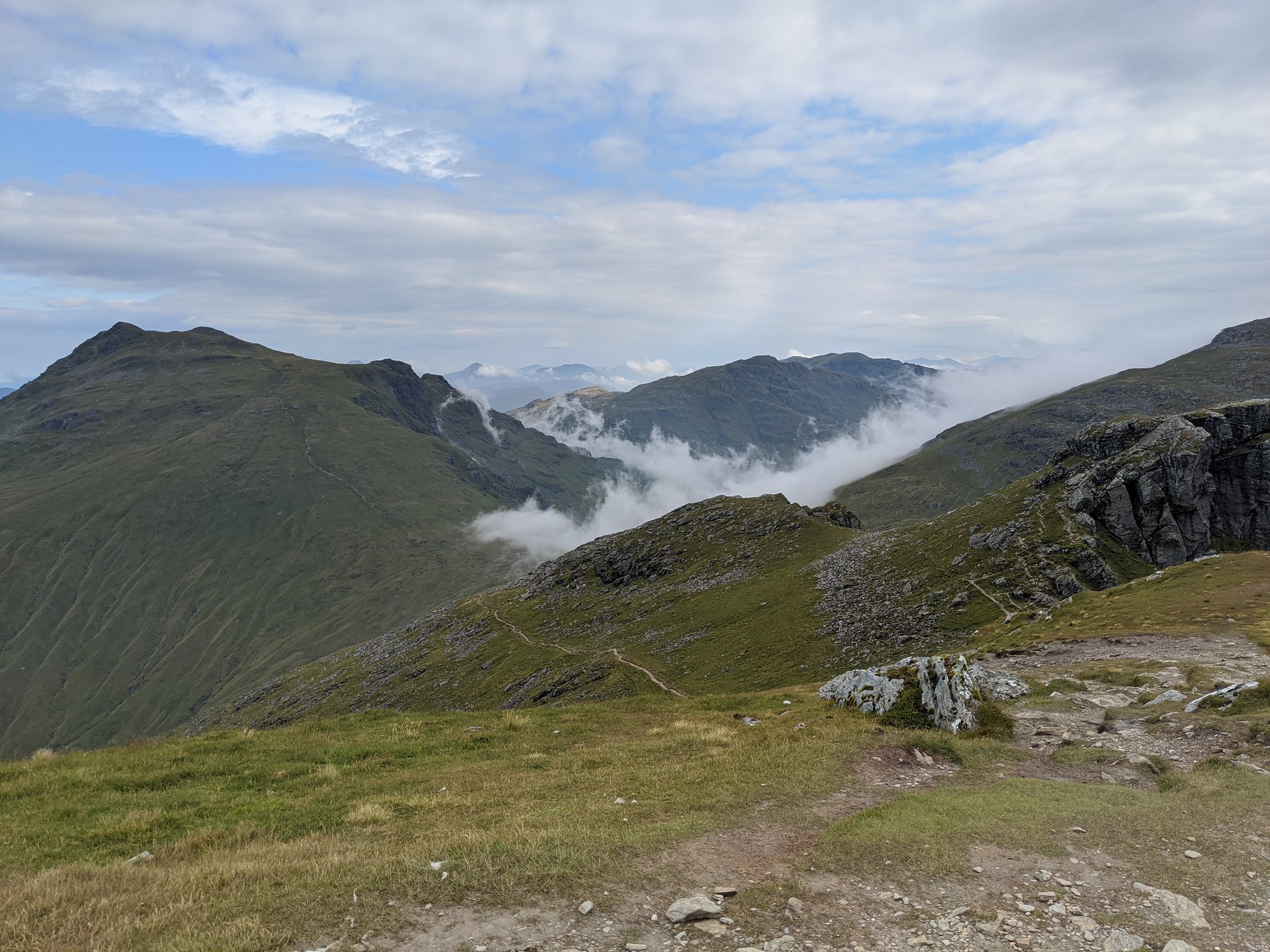 Following the excellent path off the NW of The Cobbler, we descended and then began to reascend up the flanks on Beinn Ime 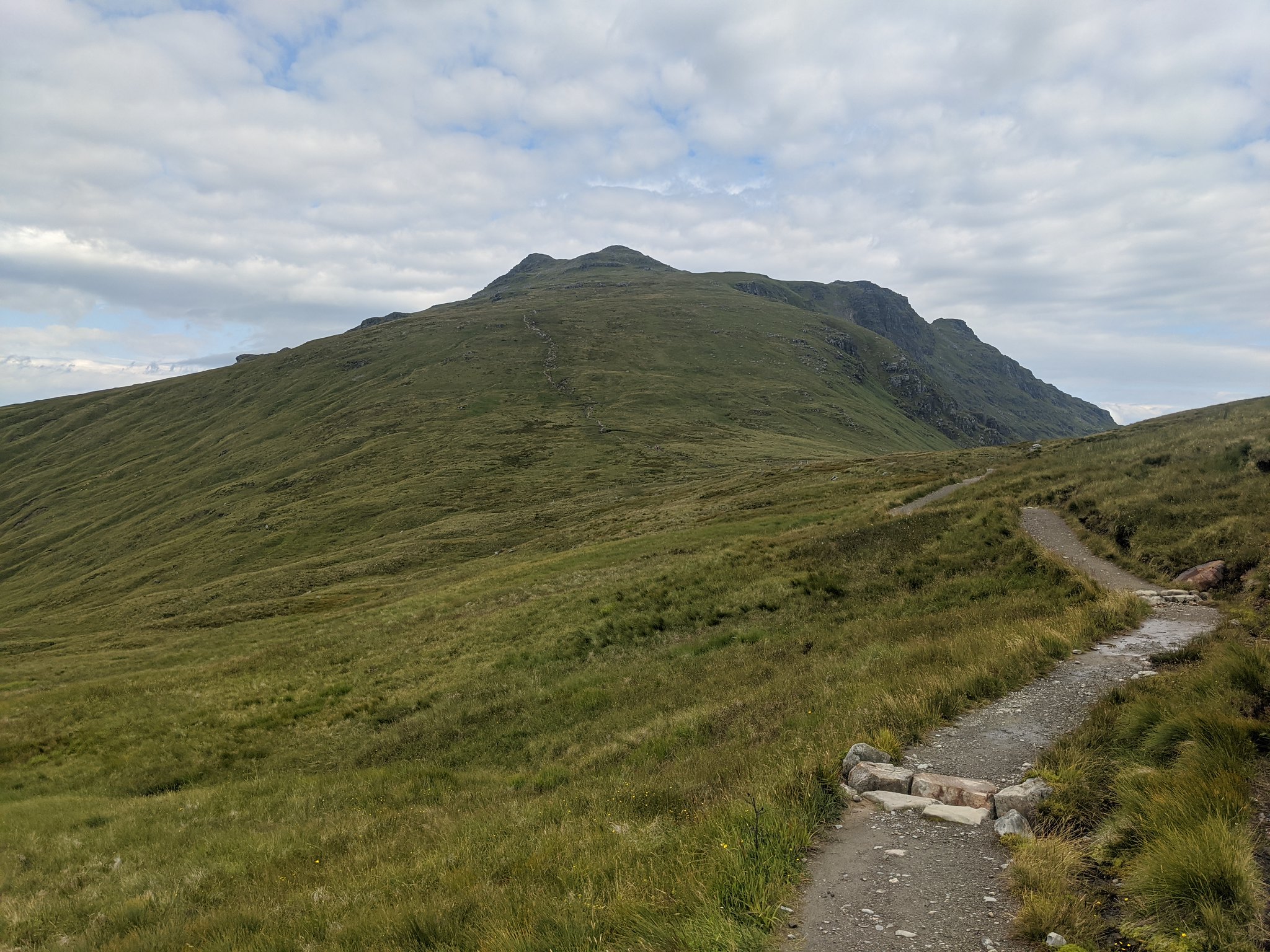 To be honest, after the steep and dramatic climb up The Cobbler, I found this ascent of Beinn Ime a bit of a thankless slog.
When we got nearer the top, however, and the views opened up, it was all worth it.

Looking back to The Cobbler and on to Narnain 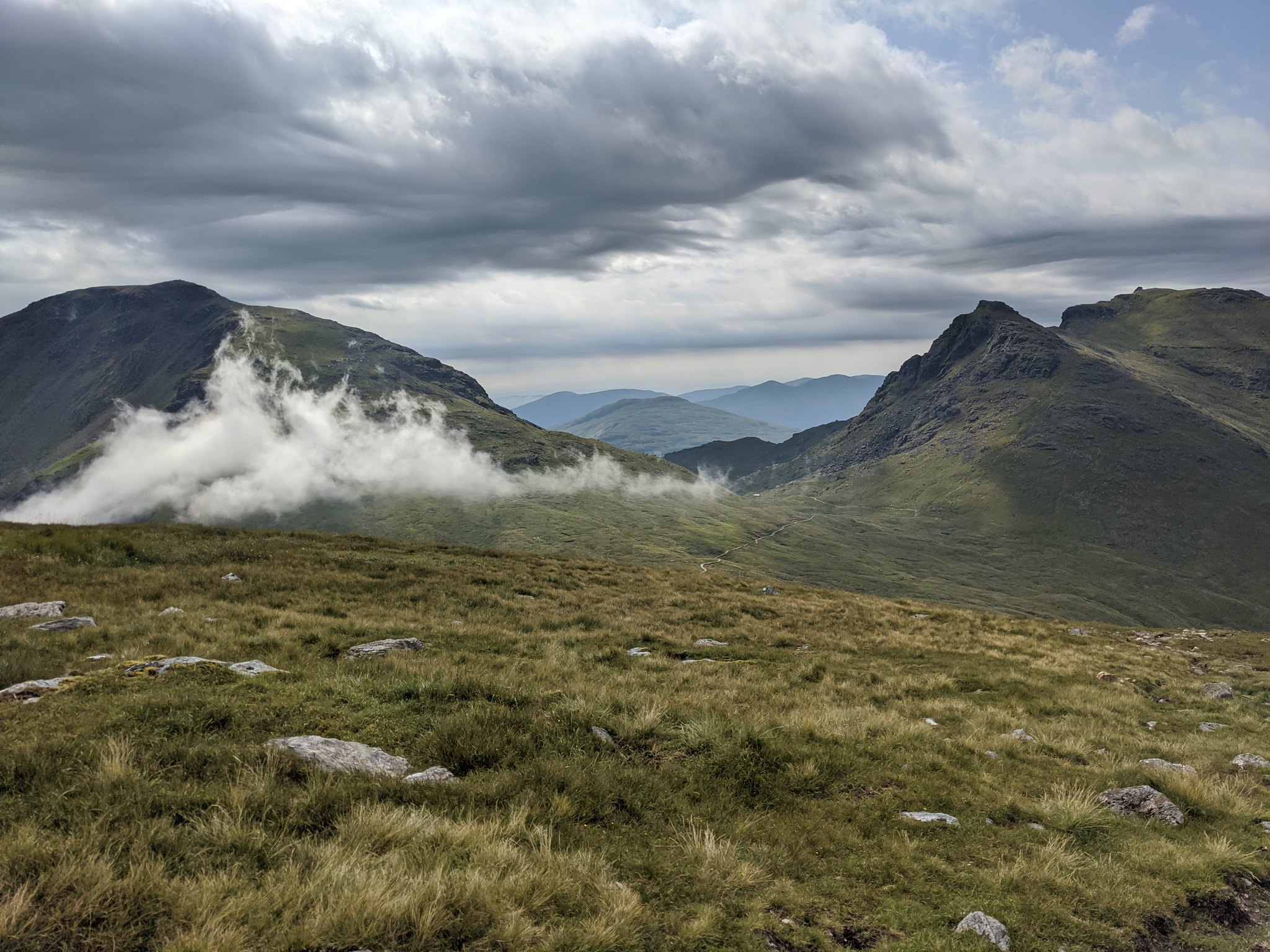 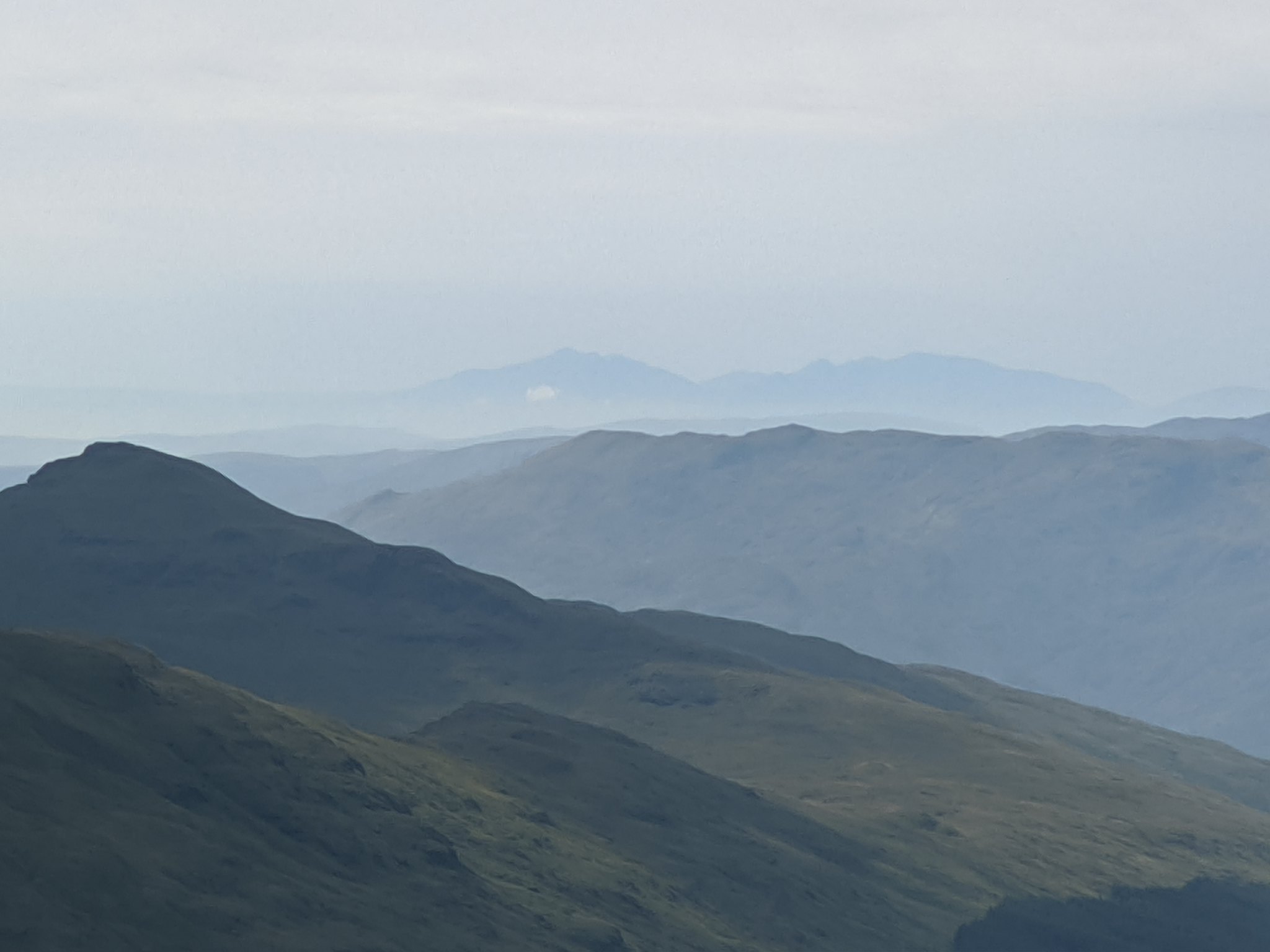 Lomond, Narnain and The Cobbler 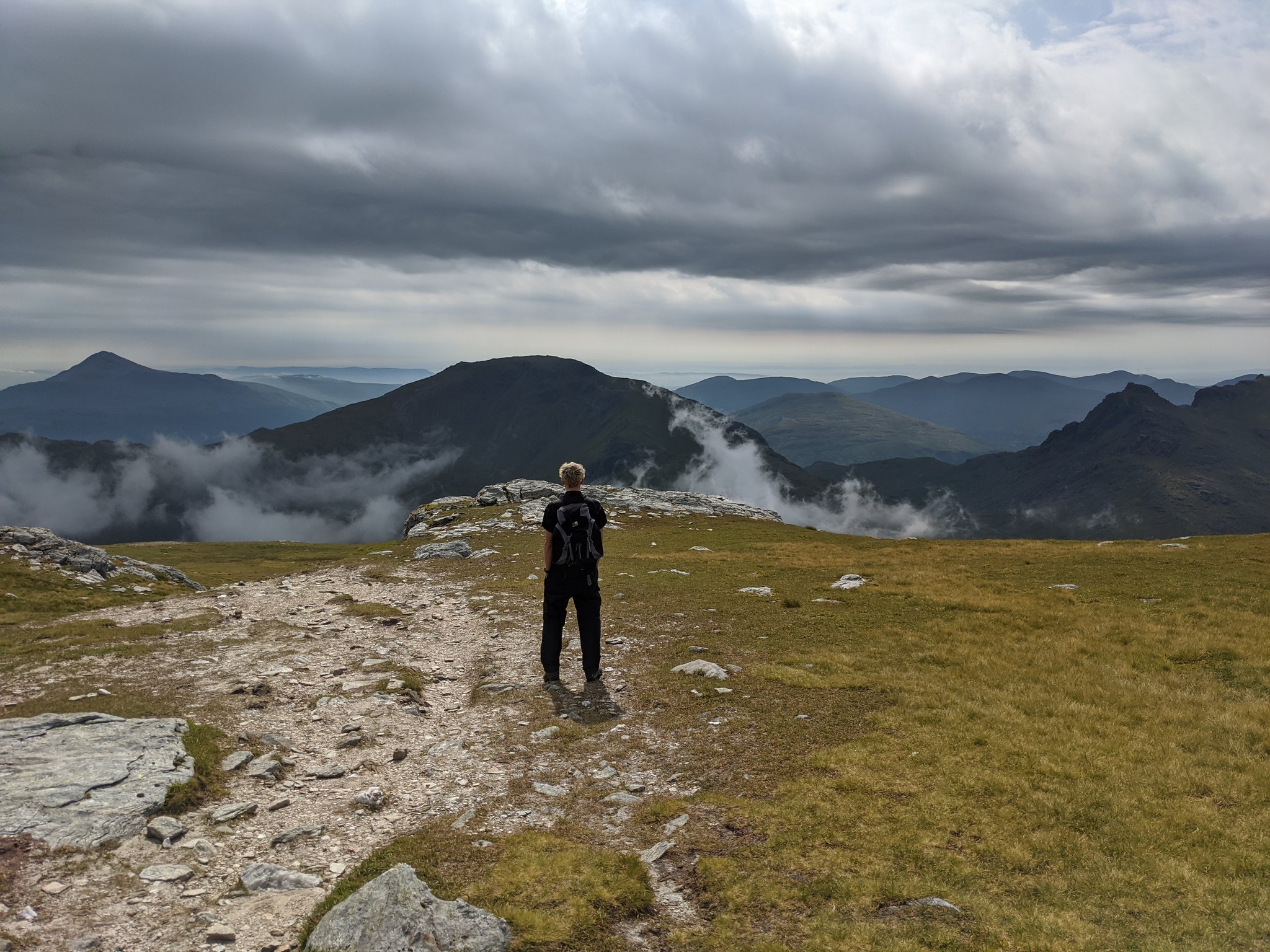 Panorama to the South 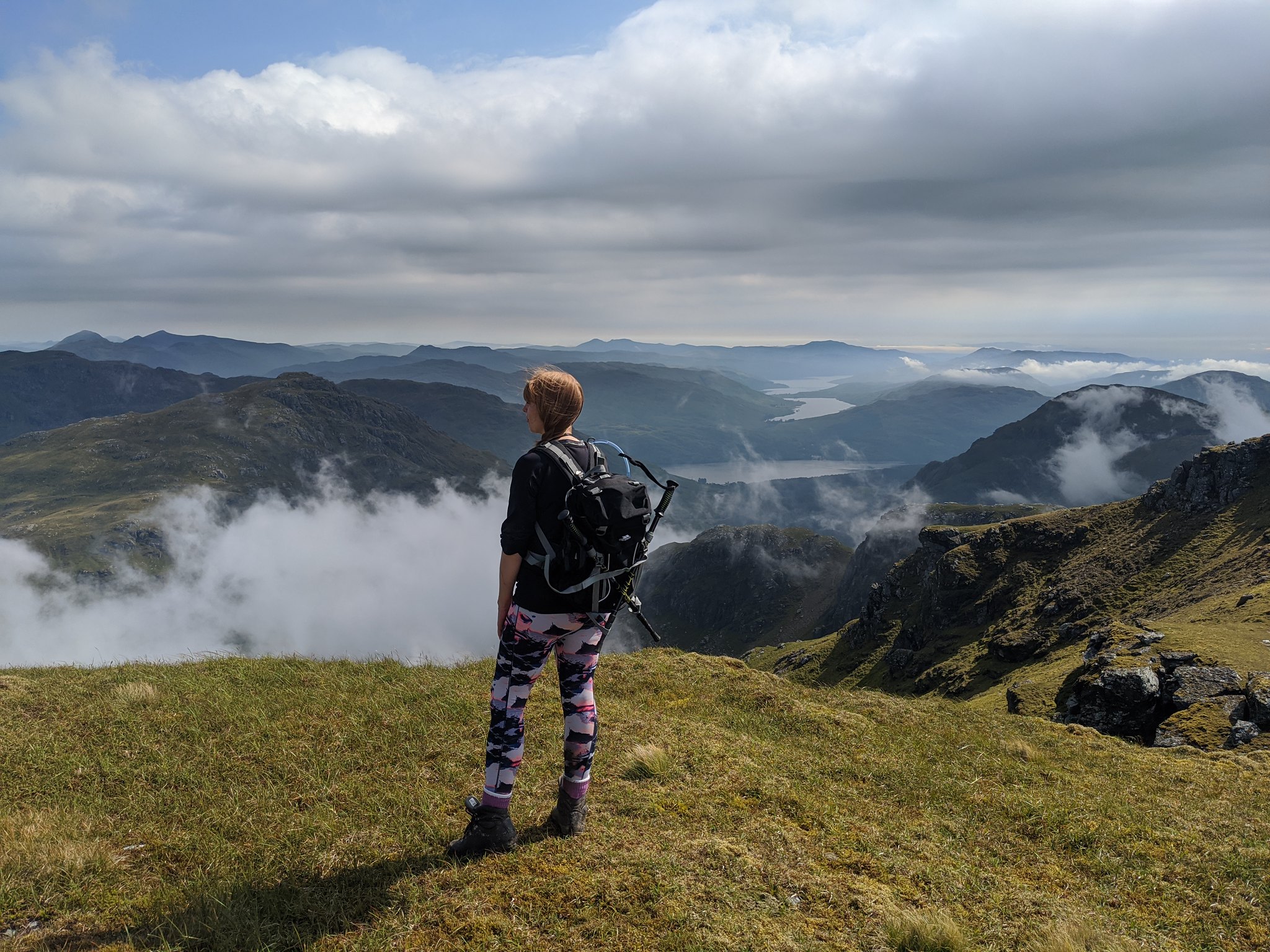 The Cruachan mountains? (I think) - which was meant to be climbed in June on a holiday in Oban (Another time - I will be back!) 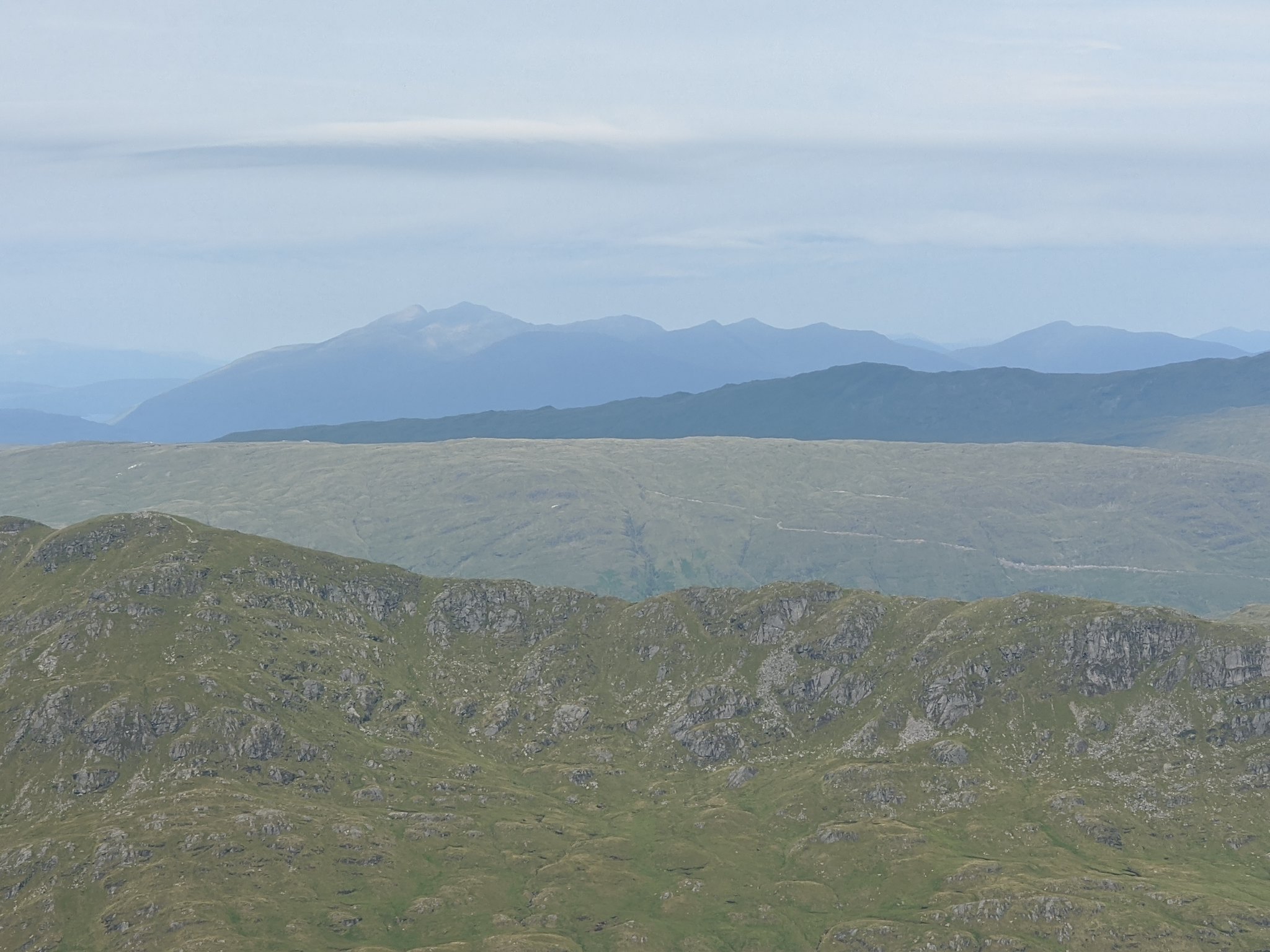 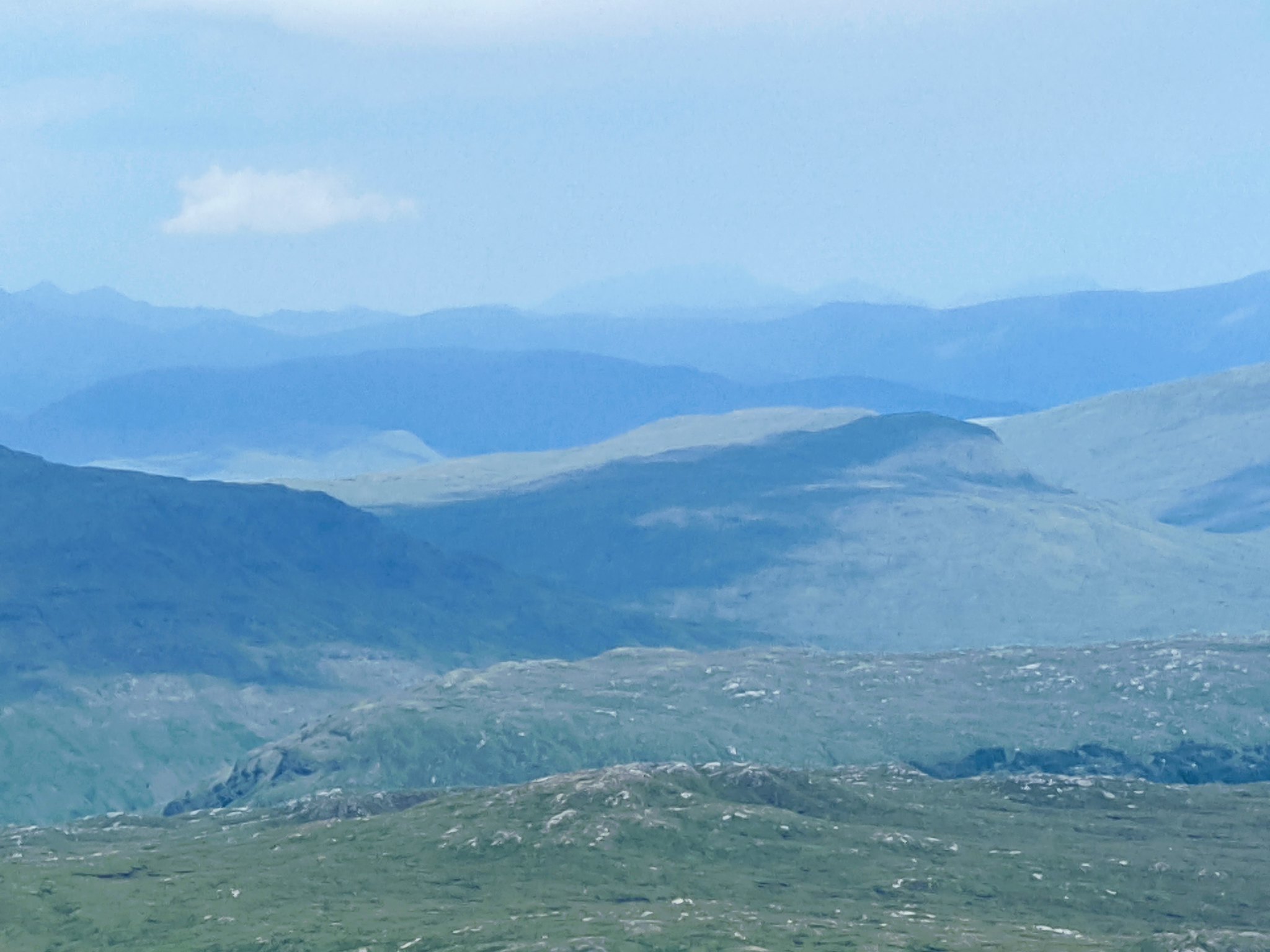 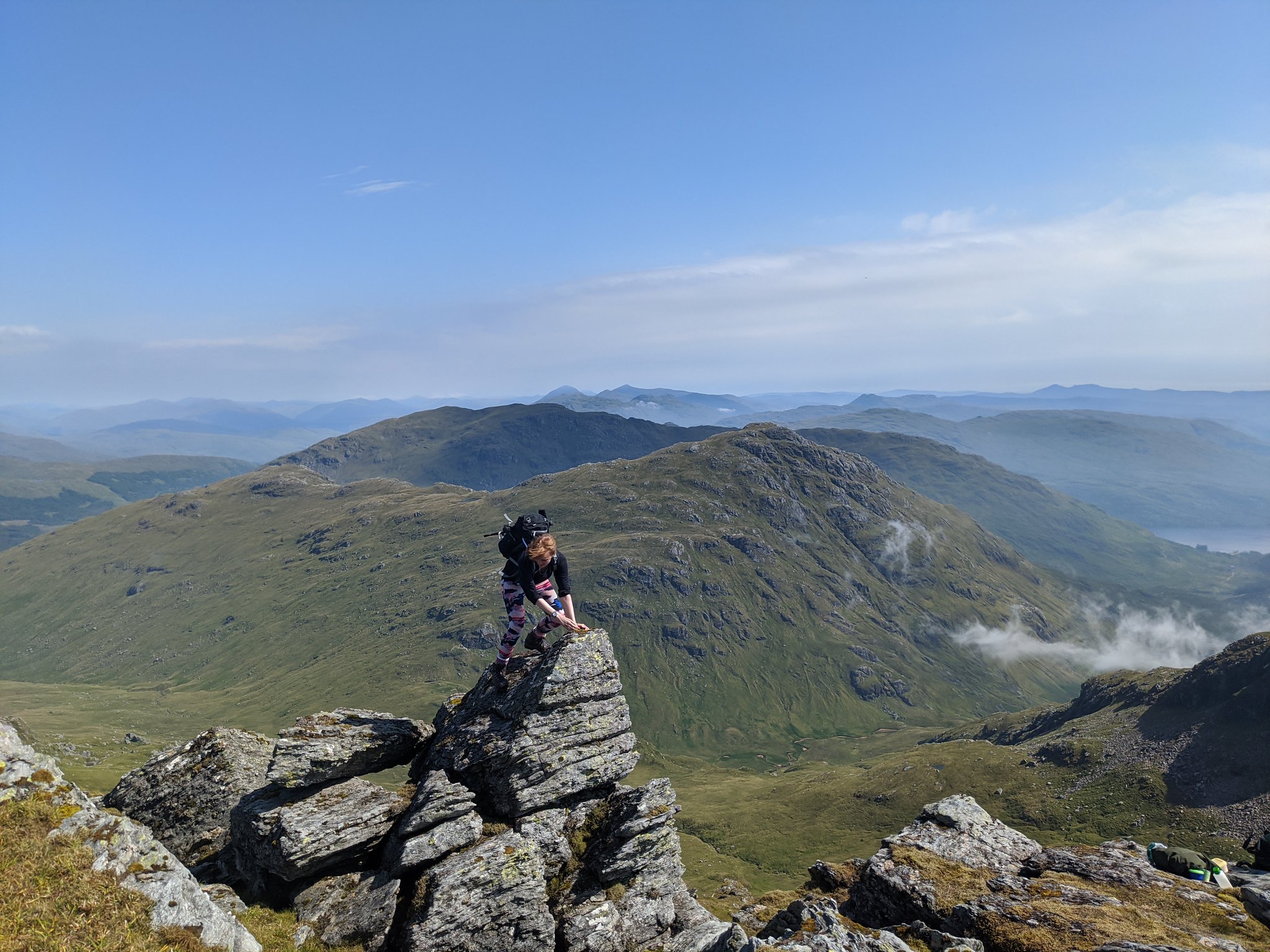 We stayed up there for a while, taking pictures, stuffing our faces with food and taking it all in. After some time, we retraced our steps down to the bottom of Ime, and began to climb steadily up Narnain - everywhere you looked the views were gorgeous 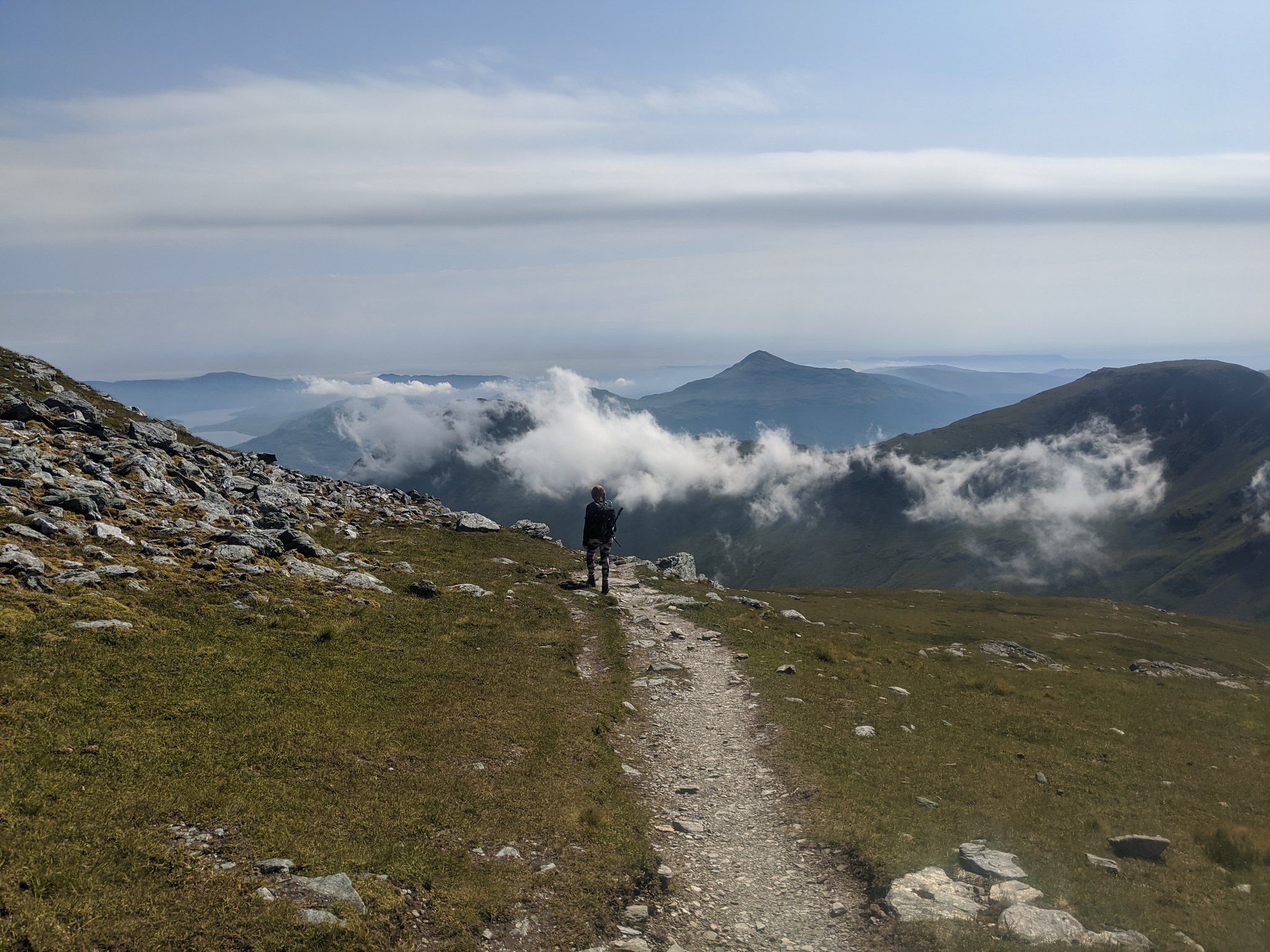 The view down Loch Long started to open out 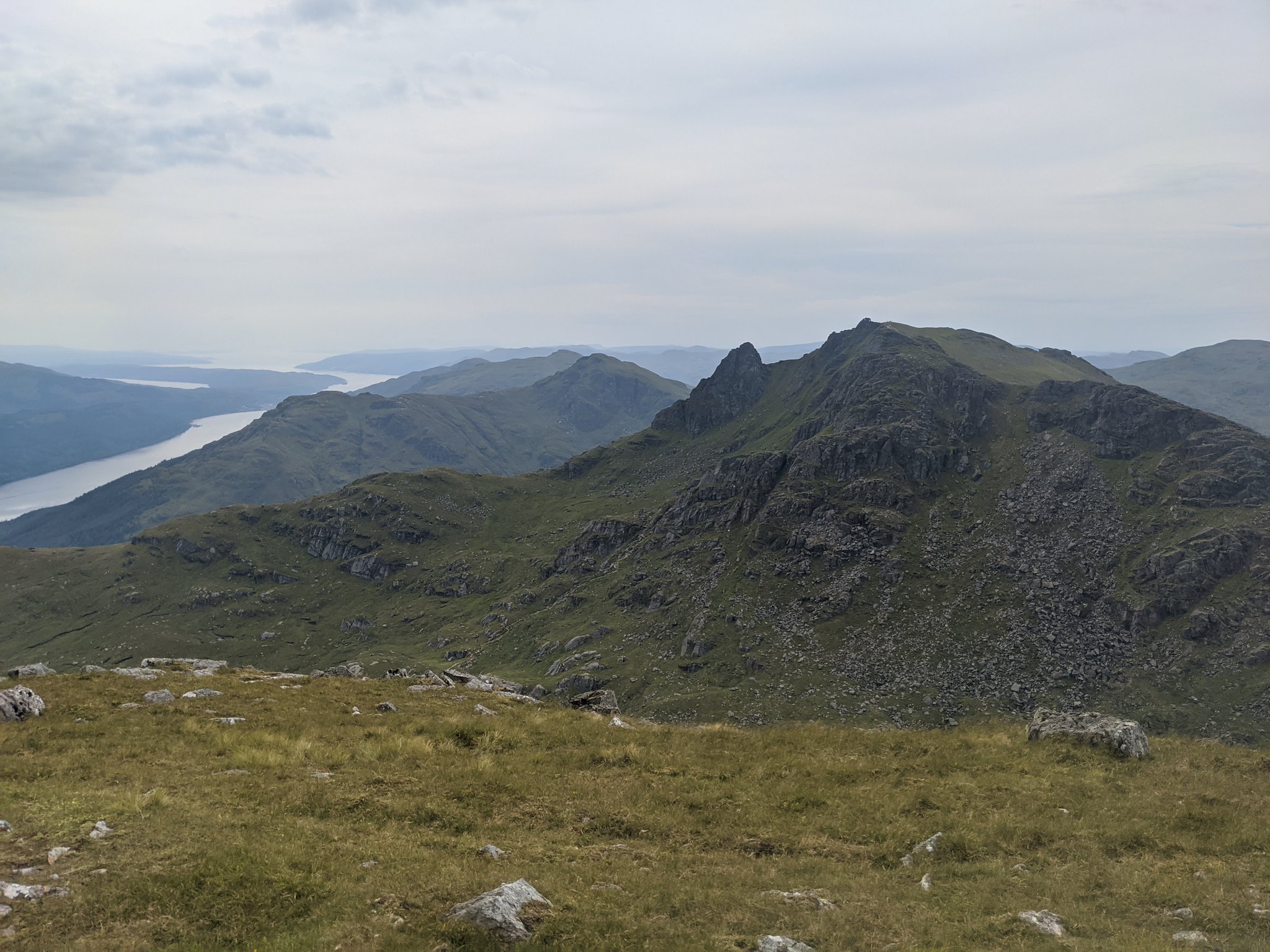 In what seemed like no time at all, we had the summit of Beinn Narnain to ourselves 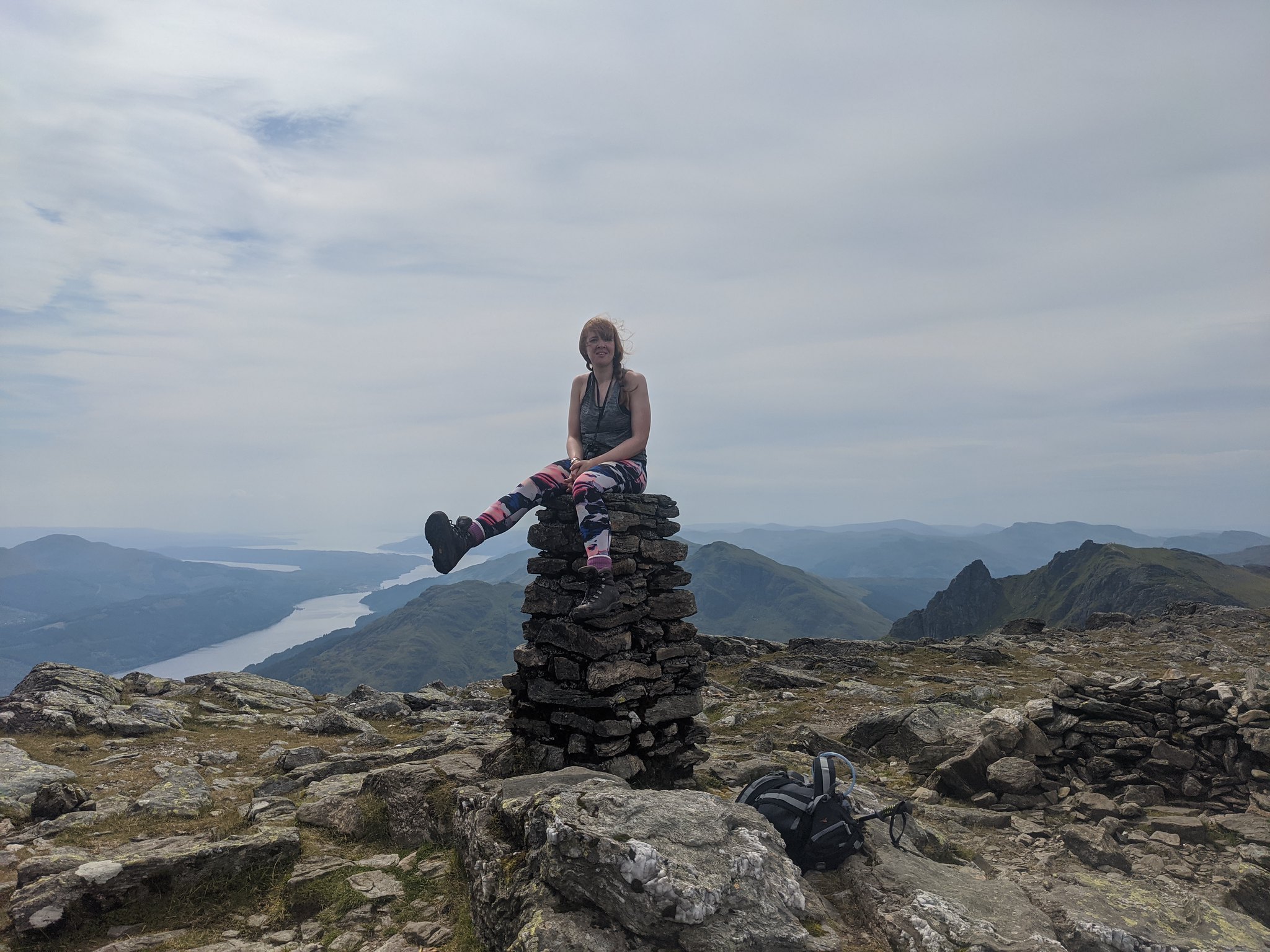 Another food break led to a discussion on the way down. We had originally planned to retrace our way back off Narnain, and then walk down the glen to the forest, past The Cobbler. However, I wanted to have a look at the Spearhead so talked my partner into coming off that way instead

This way off was much more exciting! 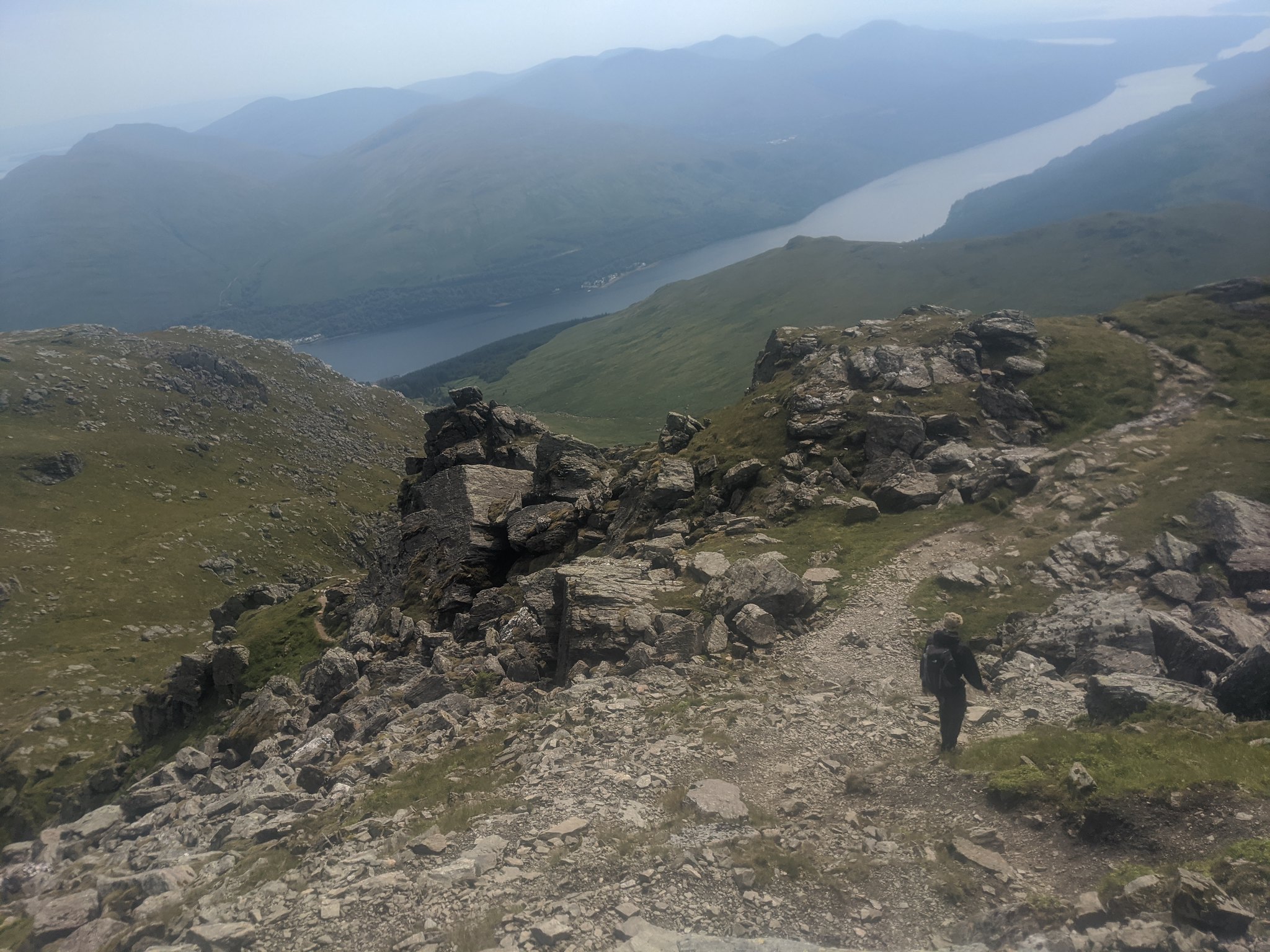 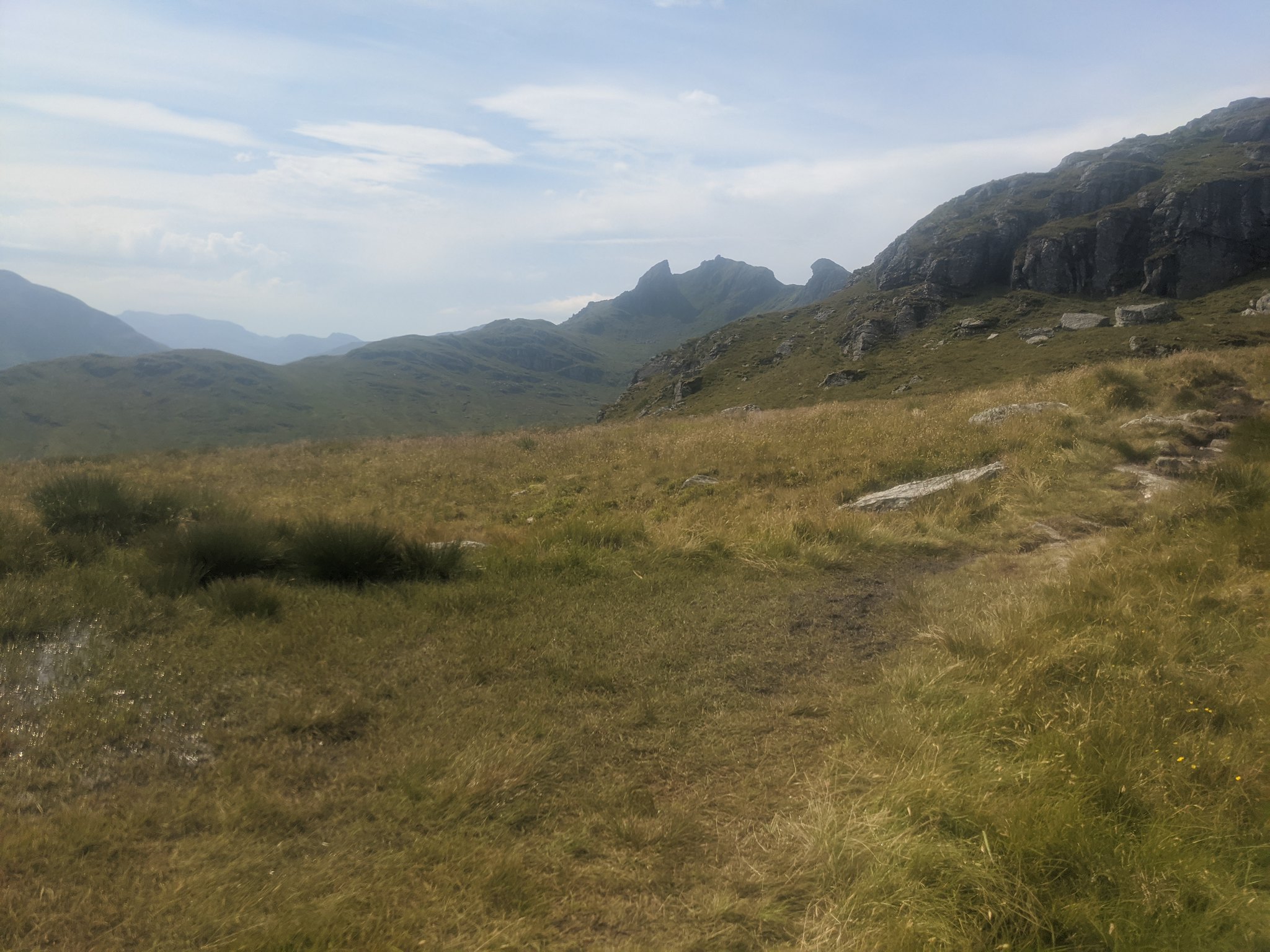 Arrochar with Ben Lomond guarding above 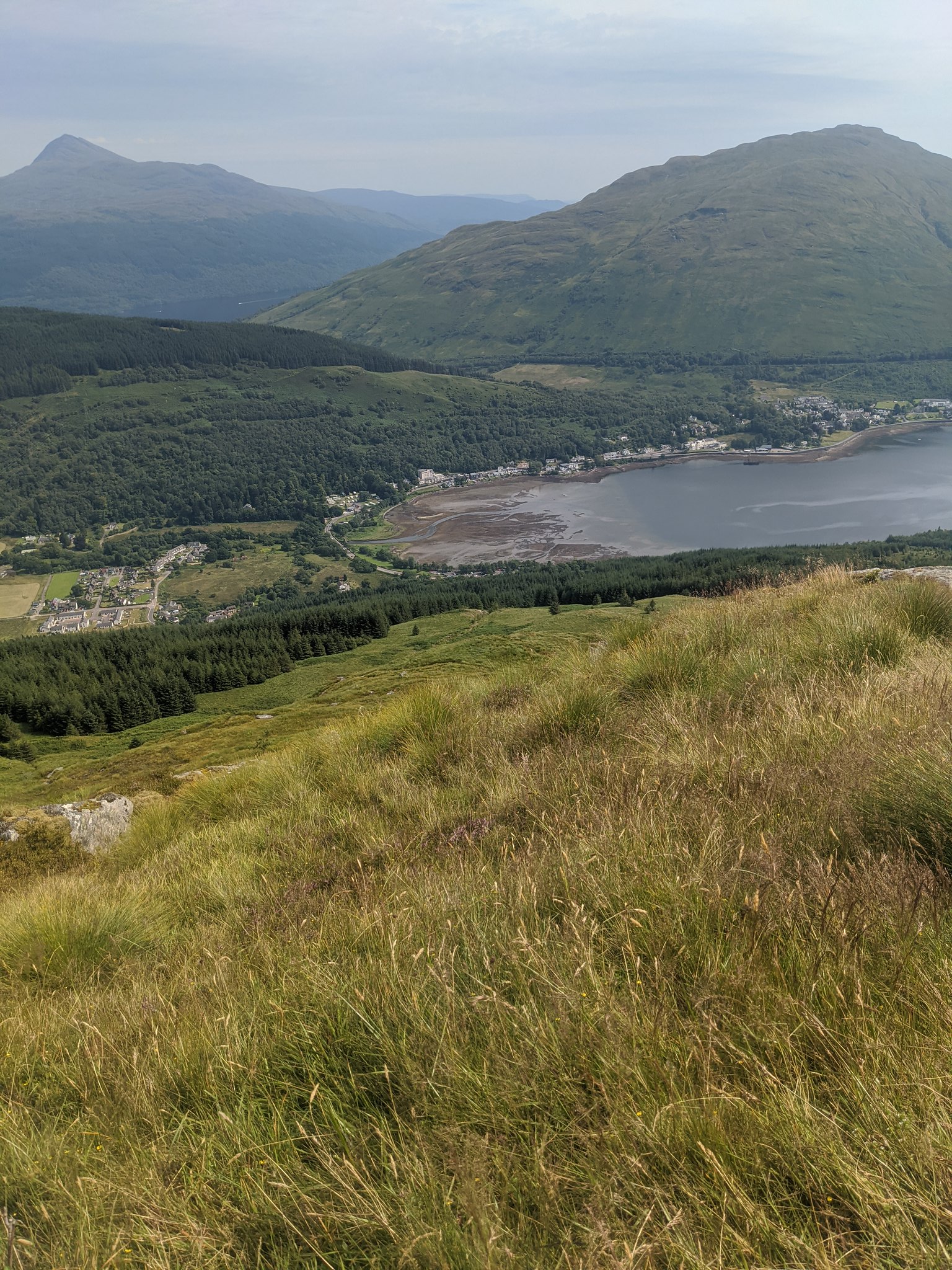 After this point - things got pretty wild. The path descended into absolutely overgrown muddy sludgy chaos. We were attacked by midges and cleggs, tripped over our feet and blasted the Walk Highlands description of the path. We made it down in one piece though soon enough, and joined the hoards of walkers coming down the final zig zags through the forest (feeling a bit nostalgic for our wild quiet path).

We made it back to the cottage just after 4 (much quicker in the day than I expected). And after a quick shower, we took ourselves off for a chippy tea followed by a pint. 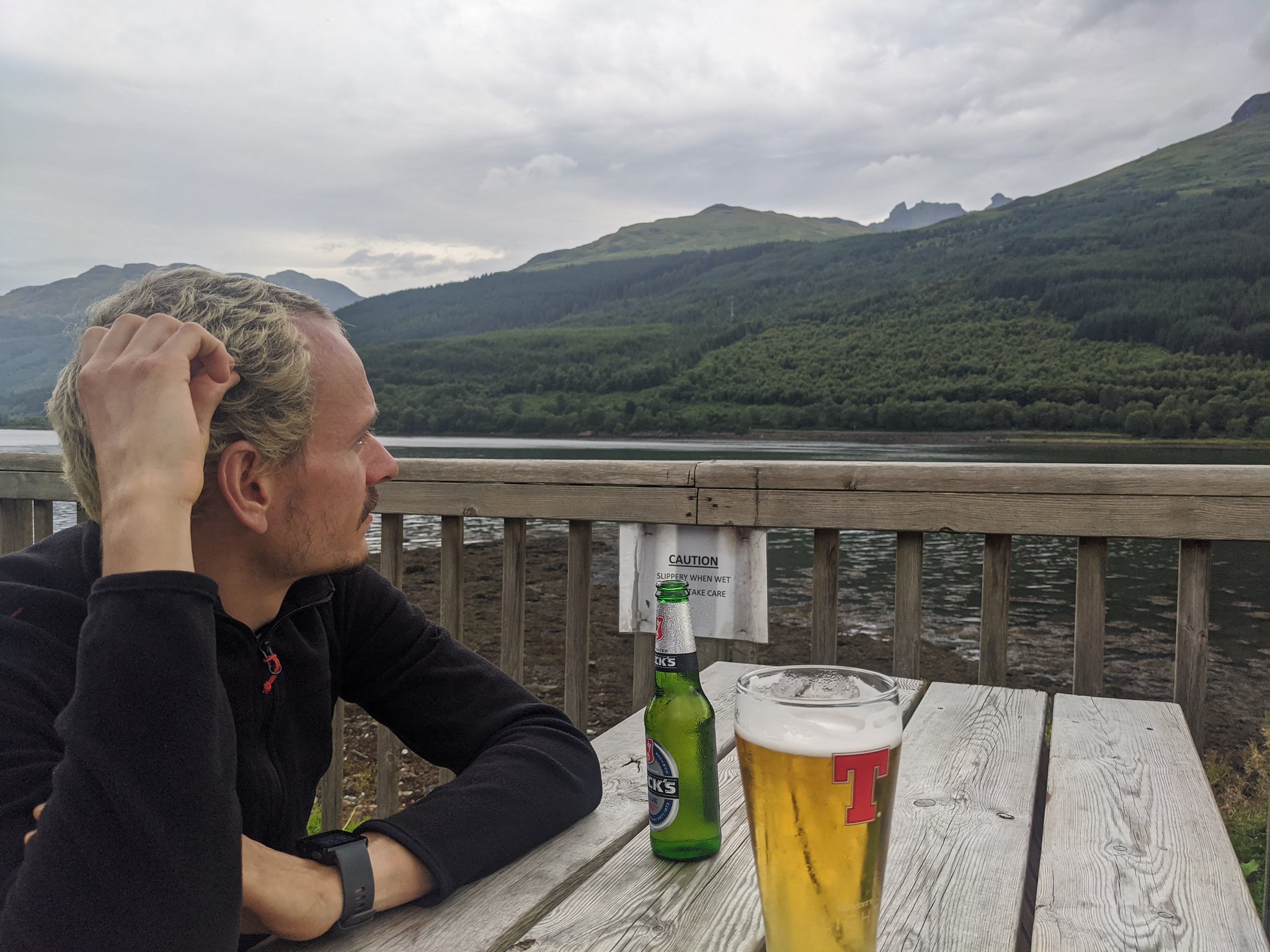 It was bittersweet leaving in the morning, what an incredible time but what a total cr*pshow to return to back south of the border. During our walk, it had been announced that people from Manchester were now advised not to travel to Scotland - my visit to see my parents for the first time this year at the end of the August now looks very unlikely.

As sad as it was going back over the border, at least I have this trip to remember. I don't know when I'll be back, but when I do, there will be more adventures to have. This report I suppose is my love letter to Scotland, I will wait for you, we will be together again.

Oh and dad, sorry you're wrong, Arrochar is fab! You don't know what you're talking about old man