The Isle of Eigg is the second largest and most populated of the beautiful Small Isles. Dominated by the remarkable vertical chockstone block of An Sgurr, had a tumultuous history. The Massacre Cave is a reminder of the island's darkest hour, but the Cathedral Cave shows that persecution continued. After decades of problems with various landowners, Eigg was finally bought by the Eigg Trust in 1997 - a partnership between Eigg's residents, the Scottish Wildlife Trust, and Highland Council.

Whilst the Calmac ferry docks at the new jetty at the verdant southern end of Eigg, Cleadale in the north is the largest settlement. Here is Laig Bay - a wide curve of sand with a stunning outlook over Rum - and, just to the north, the Singing Sands, which squeak as you scuff them with your boots. 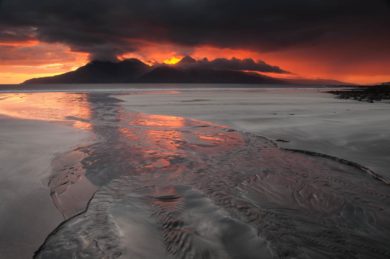 Karen Thorburn finds a haven to develop her photography on the stunning Isle of Eigg.

"I stood on the shoreline at Laig, surveying my surroundings. The coastline was peppered with large boulders known as concretions; hard rocks eroded out of the softer cliff face over millions of years; a timescale incomprehensible in my world of sunrises and sunsets captured in perhaps a thirtieth of a second..."