Clive Dennier (50) was a well know journalist around the Highlands, a free spirit and a lover of hill walking. In his recent roles he worked as Media Officer for two Highland MSPs. His last role was as a reporter with the Badenoch & Strathspey Herald. Every one who met Clive was infected by his good humour and zest for life and he had many, many friends and colleagues. Often he could be heard regaling all kinds of stories about his many escapades to an assembled audience.

On Friday 22 March 2013, Clive left work for the weekend off. He had been talking to colleagues about going hill walking. On Monday 25th March he failed to turn up at his office in Grantown On Spey and the Police were informed. Clive’s disappearance was a shock to all and in the following weeks a massive search was mounted for him. Eventually his car was traced near Loch Hourn in the Knoydart area. Despite extensive searches for Clive involving the Emergency Services no trace could be found of him. Some two months later his body was found in a river that leads into Loch Hourn. He had a gash on his head and in all the circumstances it appeared as though he were trying to cross a fast flowing river, slipped, banged his head and subsequently died.

Labour Highlands & Islands MSPs, Rhoda Grant and David Stewart today (Friday 4 October) launched the Clive campaign, an initiative to encourage those venturing into the hills and mountains to leave their details and the proposed route they are taking, with a responsible person. The Clive campaign stands for Climbers & Walkers Location & Identification Verification Envelope and comprises a preform (A4) on which all the required details should be completed. Once done there are instructions on how to fold this document into a normal envelope size and the person completing the form should then leave it with a responsible person to whom it is addressed.

Speaking ahead of the launch Rhoda Grant said “ Clive was an excellent Journalist and Press Officer, he was a loveable individual who would do anything for anyone and I am delighted for all concerned that we can launch this campaign in his memory”

David Stewart said “Clive was a friend as well as a valuable member of our team. We were all devastated when he went missing and our shock was evident within the community as he seemed to have touched everyone. It is a great pleasure to be in a position to launch this campaign in his memory.

Heather Morning of the Mountaineering Council said “I would encourage anyone, but particularly those who head out into the hills alone, to use ‘Clive’ and complete one each time they head out. No one thinks that they will have problems in the hills, but sometimes the unexpected happens. Taking a few minutes to complete ‘Clive’ could prove to be the most important thing you have ever done. A simple note could also save our valuable emergency services time and a huge amount of money”

Dave Whalley, Former Mountain Rescue Team Leader said “I often go on the hills alone and enjoy the solitude this brings. We never expect to have a problem but unfortunately this can happen. Please leave a note and when you complete the “Clive” it allows your family and friends to know where you are going. 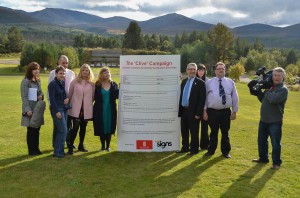 “This may save your life one day and for a few minutes work it is so simple. It will also give the Rescue Services a far better chance to find you saving a huge amount time and resources. It makes so much sense.

Speaking about this initiative, Helen Webster of WalkHighlands said “The agonising wait for Clive’s family and friends following his disappearance really brought it home to many hillwalkers the need to let others know of their plans. This initiative makes it fairly easy to do so and should be part of planning an enjoyable trip.”

In addition to the CLIVE form, Highland Police have updated their ‘Going to the Hills’ form, which asks for simple details to aid any search and rescue operations that need to be mounted. Both forms are available on Walkhighlands in the “Before you go” hill safety section.

Superintendent MacPherson said: “The contact form is not a new idea but as we approach the autumn and winter months it is the ideal time to encourage its use by all those who enjoy the outdoors.

“This information can provide an early alert if you or your party fall into difficulty and early notification can make all the difference to your safety especially during poor weather and low temperatures.”

Both the CLIVE and Going to the Hills forms can be printed from the Walkhighlands website.

Heather Morning said: “I would encourage anyone, but particularly those who head out into the hills alone, to print off a few of these forms and complete one each time they head out.”