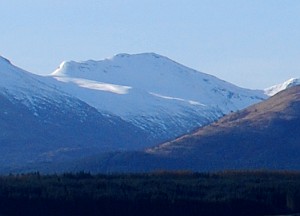 A 35 year old hillwalker has escaped with only minor injuries after falling 1000 feet down a mountainside in the Grey Corries. The climber, who was 35 and from Glasgow, was part of a group of hillwalkers.

He fell from near the summit of Sgurr Choinnich Mor in the Grey Corries at around 2pm yesterday. He had struck the hillside on the way down, scattering some of his gear and passing three rocky outcrops. The rescuers – on HMS Gannet’s Sea King Helicopter – arrived within half an hour from a training mission, and after seeing a man standing up and reading his map at the foot of the slope, initially assumed he was not the man they were searching for.

“It seemed impossible. So we retraced our path back up the mountain and, sure enough, there were bits of his kit in a vertical line all the way up where he had obviously lost them during the fall,” said Lieutenant Tim Barker.

“It was quite incredible. He must have literally glanced off the outcrops as he fell, almost flying.”

Paramedics lowered to the man found he had suffered only a minor chest injury and cuts and bruises.

“He was shaking from extreme emotional shock and the sheer relief at still being alive.

The casualty was then transferred to Glasgow Southern General Hospital.