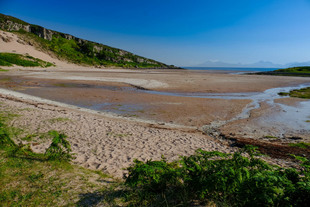 The first episode of the BBC2 series Monty Halls’ Great Escape has caused a frenzy of interest in the Applecross peninsula, prompting hopes of a bumper year for tourism in the remote community. The programme, filmed during the perfect weather of spring 2008, followed Monty’s attempts to live as a crofter for six months and featured stunning shots of the scenery of Wester Ross and the adjacent Isle of Skye. The jaw-dropping visuals had viewers rushing to their computers to find out more about the idyllic spot.

“Since the programme aired on Sunday night we’ve experienced a 1300% increase in visitors reaching our site via Google searches on the name Applecross”, said Paul Webster, who runs the walkers’ website Walkhighlands which helps to promote the area. “Searches for the remote village are usually steady but few. We’ve never seen such an explosion of interest in a place before. The Inn there is always popular but I’m sure that Applecross is going to have a bumper year.”

Until April 7th you can enter our competition to win a food hamper, including meats produced by Keith and Rachael Jackson as featured on Monty Halls’ Great Escape.

If planning to visit the area, see Walkhighlands’ accommodation and walks in Applecross.