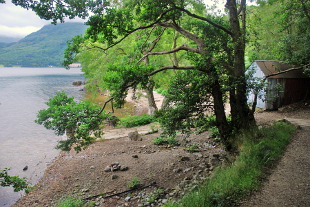 Protesters have been camping out at Inversnaid, on Loch Lomond, in an attempt to stop the construction of a cycle track. The track, which was granted planning permission by Stirling Council and is being built by Forestry Commission Scotland, will eventually link Inversnaid to Stronachlachar on Loch Katrine following the route of an old military road.

Although the project began as a community effort, residents in Inversnaid are concerned about how close the cycle track will be to their houses, the scale of the track, and possible damage to the only road into the hamlet which may be caused during construction. A number of residents camped out in front of the diggers over the weekend in an effort to halt the building process and to be able to negotiate about the size, scale and location of the track.

Andre Goulancourt, from Strathard Community Council, told the BBC, “The cycle path is a community-led project in the first place, though we didn’t quite envisage it on the scale the Forestry have made it. This particular objection is due to the path being brought very close to one house, which affects their privacy and outlook. All we’re asking them to do is to move it 20 yards further away.”

Forestry Commission Scotland say that there has already been extensive consultation during the planning process when changes were made to the plans including planting trees to screen the cycle path from homes.