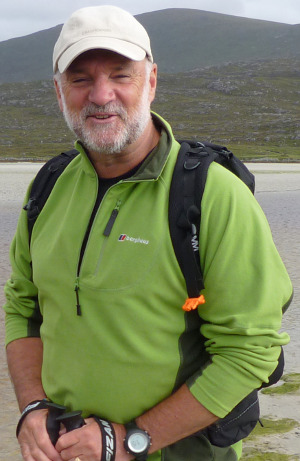 A new long distance route running the length of Scotland was launched today. The unofficial route, which has been devised by outdoors writer Cameron McNeish and uses existing long distance trails and established walking routes, links Kirk Yetholm just north of the border and Cape Wrath in the far north west Highlands.

The 470 mile Scottish National Trail will be marked by plaques at the start and finish and where it utilises other long distance walks, such as St Cuthbert’s Way, the Forth and Clyde and Union Canals and the Rob Roy Way there is some waymarking for those routes, but other sections such as the northern stretch to Cape Wrath make for a more a serious and challenging backpack. The launch, which is being supported by Scotland’s First Minister, Alex Salmond, took place at the Water of Leith where another plaque has been placed at the Visitor Centre.

A BBC Scotland programme featuring the route is due to be screened on TV around Christmas time, and Cameron McNeish has just published a book to co-incide with the launch.

Paul Webster from Walkhighlands commented “This is a superb route with great variety, taking in everything from the Water of Leith Walkway through the city of Edinburgh to some of the wildest country in the Highlands in the far northwest. Cameron’s route demonstrates convincingly just why Scotland is one of the best places in the world to take a walk. Hopefully his route and book will not only inspire others’ to follow in his footsteps, but also to encourage walkers’ to think up their own epic challenges making best use of both Scotland’s historic paths and modern trails.”

The new route adds to the wealth of long distance walking routes now available in Scotland. Ranging from unofficial challenging backpacks like the Cape Wrath Trail and the Skye Trail, to well established and very popular routes such as the West Highland Way and the Speyside Way, there are also lesser known trails including the Cateran Trail in Highland Perthshire and the Three Lochs Way. Many of these can also be linked together to form epic routes criss-crossing the country in a similar way to the South to North challenge of the Scottish National Trail and there are also many opportunities for day walks or shorter trips taking in part of these trails. Check out the Scottish National Trail and other long distance walks in Scotland on Walkhighlands.