A Community That Takes to the Hills

Mid November and the forecast for our walk was bad enough that I wondered if we would still go. After the previous day of high winds and sleet, it was now to be steady precipitation and no more than 2 or 3 degrees. But as we gathered around the minibus at the Corbenic Community in slight drizzle, no one raised the question. Curtains of cloud hung just below 1000 feet, and were pulled open occasionally to show the surrounding hills marked with the low boundary of new snow.

This was my first outing with Corbenic’s hill-walking group, a weekly event for at least a quarter of the 38 residents and a number of staff and volunteers who support them. I was soon to learn that absolutely nothing diverts the sacrosanct routine of this initiative, now established for two years. Of course we were going!

Corbenic is a Camphill community in Strath Braan for adults with learning difficulties. There’s a small farm on which the land and animals are tended with low levels of mechanisation. Creative activity is prioritised through music, stories and the crafting of things; loaves of bread, pottery, furniture and candles, all sold in their shop and café in Dunkeld, four miles away. Each household on the site is home for up to 6 adults with learning disabilities, 2 house co-ordinators and 5 co-workers who come from all over the world, contributing a further sense of diversity and mix of tradition. On my occasional visits I’ve always been struck by the calm and creative atmosphere in the timber-built workshops where kitchenware is decorated or furniture constructed. There is no doubt that this is a special place in a beautiful setting. 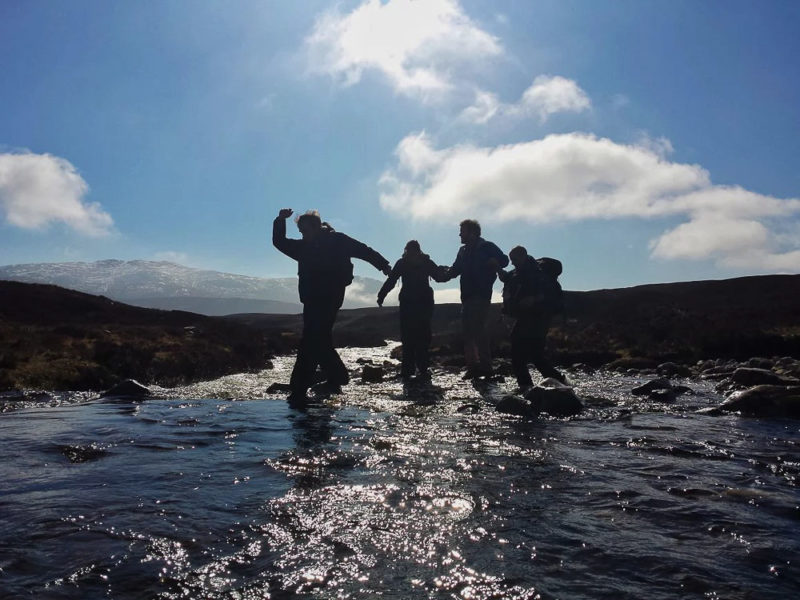 The creativity has recently been turned outwards to the world by the establishment in 2014 of a 5 km poetry path around the edge of the 100 acre estate. Poems by local writers and poets from further afield can be read in varied installations whilst a mix of woodland, moorland, pasture and riverside are sampled underfoot. The poetry path was the brainchild of Jon Plunkett, a poet himself, and Stone-carver Martin Reilly. Jon also instigated the hill-walking group, following on from the popularity of a similar initiative developed in his previous position in West Lothian.

‘Who put the puddles on the path?’ Alan asked me with indignation as we started to climb from Guay, between Ballinluig and Dunkeld. Ben and Mark both splashed gleefully through, seemingly unconcerned when water came over the tops of their boots. We were walking towards Deuchary Hill, a small rocky summit with big views in the heart of the Atholl Estate which occupies a large tract of high, roadless ground east of the A9 and welcomes walkers to enjoy open moorland, plantation forest and native woodland through an excellent system of tracks and paths.

It wasn’t long before we were enveloped by cloud. Simultaneously we reached the snow line. Alan puzzled anew about why the snow chose to fall on the path. A quick canvas of opinion suggested that most of these walkers preferred dry paths, but nevertheless, there were no complaints and nothing slowed them as we fell into a steady line along the path between young birch trees beaded with melting snow, and through some young plantation.

I’d come with few expectations but had dressed warmly, partly because of the forecast, and partly because I’d anticipated a certain amount of meandering and faffing, possibly even some distress. But I was wrong. The steady motion was only interrupted with calls to the leaders to wait for the slower ones. Clearly the routines of attire, the small rucksack each carried, the ‘clockwork’ expectations of the outings meant all were focused on forward momentum. All are there by choice and their anticipation of this point in the week speaks of their enjoyment.
The group favours places where there are clear paths or tracks as some members have impaired vision, but the trips are not unambitious. This year they have already climbed six Munros and had an overnight stay in a bothy. The level of risk might not be significant for conventional hill-walkers, but the complex needs presented by this group with a variety of conditions, physical and communication constraints, introduce additional factors. Their walks have not been without incident, and have included epileptic seizures and a broken leg. There is a need for detailed risk assessments and all helpers are trained for emergencies. Jon, Juan from Catalonia, Daniel from Hungary – all volunteers and staff – are equally keen to be out on the hill. ‘It’s not really like work,’ one said to me. For some, it has been their introduction to hill-walking and is now a new hobby outside work as well as part of it. I enjoyed observing the way relationships worked, the respect and good humour that came from existing rapport with residents, with knowing the needs and capacities of each. They offered a supportive hand, or two when needed, to help crossing a burn or get over a slippery surface, but always encouraged independence where appropriate: ‘Yes. You can do that on your own.’ The empowering culture of the Corbenic Community is carried up into Perthshire’s hills.

We soon broke out of woodland and also out of cloud to where a misty blue sky arced over Lochan na Beinne. Some of us stopped just to note the stillness of reflections and then we all made our way steeply up to a snowy knoll under Deuchary Hill for lunch. Coffee was brewed for all who wanted it. 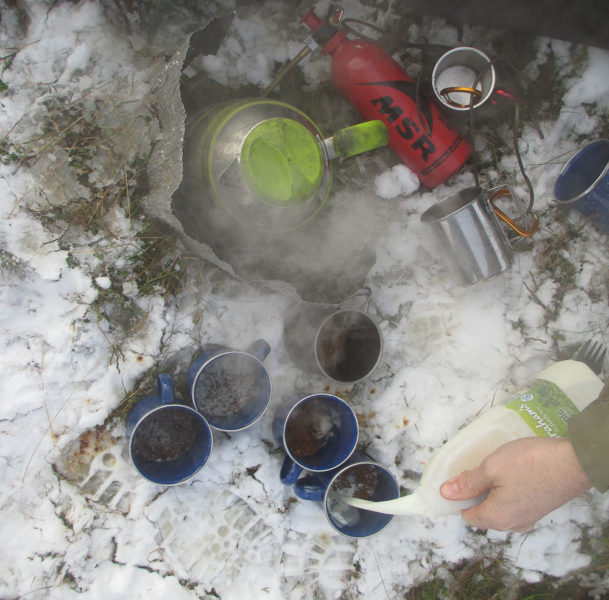 After a while, the mist swam back in and we packed up. The first part of the descent towards the lochan was steep and slippery. Ben’s feet shot out from under him so he fell hard onto his back in soft snow but he soon gathered himself to upright amidst his own noisy hilarity at the spill. He punctuated the rest of the descent with cries of: ‘Whoops-a-Daisy!’ and peals of laughter.
Back onto a grassy track lower down, we took a slow arc across the hill, now in low sunlight, our route then folding back to contour parallel with the Tay glimmering below us. Ahead, snow-covered hills rose above Pitlochry. I was enjoying this visible crossover of autumn and winter, the vertical transition made between glowing colour below and the starkness of the hills above. Our shadows stretched long behind us. As in any group’s easy walk ‘out’ from the hill, there was a sense of relaxed contentment. In other groups, this might be a time of chatter, but mostly we each went along in our own world, one perhaps humming a song, but all falling into a shared rhythm of footfall and closing in on a destination as we strung out along the sunny path.

Some of us were visibly tired. Despite that, it’s clear that levels of fitness have developed. Activity can be hard to sustain for long at the Centre, even if residents are outside helping with ponies or wood-chopping or the maintenance of the poetry path. A day in the hills, moving with necessary purpose, has clear benefits both physically and behaviourally. Jon told me that the evenings in each of the Community’s houses after their hill days are the easiest of the week for house-parents. He also told me how rewarding it has been to have played his part over the last couple of years: ‘Seeing fitness levels increase, seeing people appreciating our wild landscape through the seasons, and feeling the bond that has formed between us all through shared adventures has been really very enjoyable.’ I found myself grinning on this beautiful, bright, contouring return to the van, felt uplifted and privileged, not only to be out in the hills on such an unexpectedly good day, but sharing the warmth of this experience with a mixed group of people with ‘can-do’ attitudes. The nurturing influence of human kindness and motion through the natural world. What better therapy could there be?

Advice from Mencap on offering walks to people with learning disabilities: https://www.walkingforhealth.org.uk/sites/default/files/Mencap%20guidance_0.pdf