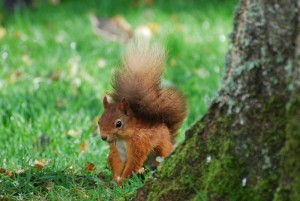 To mark Red Squirrel week (4 – 12 October) a special real ale is being sold to raise funds to save the red squirrel. Atlas Bewery, based in Kinlochleven, has brewed the Red Squirrel Ale, part of the proceeds of which will go to the Highland Red Squirrel Group.

HRSG said it has been estimated that only 160,000 red squirrels are left in the UK. The Highlands is considered a stronghold, but the mammal is under threat from Squirrel Pox which is spread by grey squirrel who are immune. The pox causes open wounds on the red’s eyes, mouth and ears and leads to certain death within about 2 weeks. Work is underway on a vaccine but this is unlikely to be available for several years. This disease has already decimated red squirrel colonies in Lancashire and there is a fear it could be spread by single greys who appear in the Highlands from time to time, and by the general encroachment of greys on the traditional red territory in the south of Scotland. Loss of habitat has been identified as another factor in their demise. An excellent excuse to have another beer!