Kovea have been making stoves for a number of other companies for years, but this year sees the introduction of the Kovea brand onto the UK market for the first time. We spent some time with the Spider stove, a remote gas canister stove ideal for winter backpacking trips. 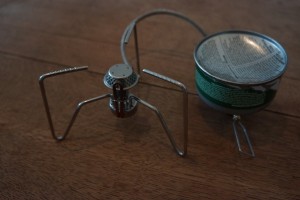 As alluded to in a previous review the remote canister design has definite advantages over a canister-mounted stove for winter use: by moving the burner away from the gas canister the stove can be lowered and the pot supports/legs widened to increase stability on uneven ground and accommodate wide pots. There’s far less risk of inadvertent soup spillage. In cold weather the remote canister can be manipulated to boost performance; the canister can be insulated to help the propane/butane mix burn off efficiently, and/or the canister inverted to form a liquid feed stove if the stove features a preheat tube. This is a useful winter technique – if it’s so cold that the canister contents refuses to ‘boil off’ and leave the canister as a gas it’s time to consider feeding the stove the liquid contents instead. By inverting the canister (thanks to a swivel connection at the valve) there is less reliance on internal canister pressure to get the fuel into the burner.  The small preheat tube looping into the flame next to the burner head vapourises the liquid fuel before it reaches the burner as gas. Of course, if it’s so cold that it’s not even possible to eke out enough gas to light the stove in the first place in order to heat the preheat tube, then more drastic canister-warming methods will be required (or a ‘proper’ liquid fuel stove)… 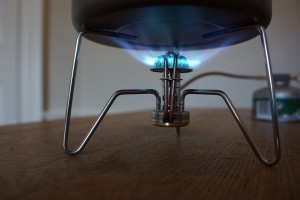 The Spider has a feeling of rugged reliability – unfolding the three wire legs feels assured and results in a stable platform capable of supporting both wide and narrow mug-style pots aided by a series of grippy notches. A little push down on the legs and they swivel to pack down into a surprisingly compact nylon bag that I managed to fit into a range of pots along with a small gas canister. The burner head is small but the flame pattern wide enough to offer decent cooking performance rather than just boiling water quickly. With the valve tightened down it’s possible to effect a pretty good simmer, but when opened wide a comforting roaring flame still brings water to the boil in good time. The preheat tube is small and neat – Kovea have invested time and effort in reducing weight here – and it prevents the flare-up that can occur when used with an inverted canister. Moving away from the burner the armoured hose has enough flexibility to prevent the stove flipping when the canister is manipulated, and there’s a good swivel connection between hose and valve. The machined valve is neat and the wire bail permits valve adjustment when wearing gloves. Locating this on the side of the valve, with a flat surface on the ‘top’ of the valve assembly means the flame can still be adjusted with the canister inverted and there isn’t a drastic need for extra canister support. There isn’t a piezo ignition, but given the number of failed igniters I have experienced that’s not a huge deal (and it keeps the weight down) but a separate plastic handheld igniter (weighing 13g) is included. There’s no windscreen included, but a simple foil design is highly recommended to improve efficiency. And being a remote canister stove there’s not much chance of the gas canister overheating due to restricted airflow. Most screw-fitting gas canisters used in the UK are a mix of butane and propane, but Kovea offer an adaptor to enable the stove to be used with pure butane – significantly cheaper than the usual propane/butane blends. Butane tends to perform poorly in cold weather, but Kovea claim that they’ve had no issues when used year-round in the UK. There’s also an adaptor that allows the Spider to accept the Easy-Clic Plus Campingaz canisters favoured in France and Switzerland. I refuse to get too excited by claims of rapid boiling times and huge BTUs (British Thermal Units) – these figures tend to be obtained in a lab in perfect conditions, and in the real world I’m not too concerned if I have to wait a few more seconds for my tea. Fuel consumption is slightly more relevant if planning a long trip – a fuel efficient stove can make a difference when planning resupply packages but again there are too many variables to be able to offer a definitive figure. Besides, that’s half the fun of trip planning isn’t it? Just me then…. Regardless, Kovea offer a gas consumption figure of 130g/h, then state that this figure was obtained at “25 degrees (sic) for  30 minutes in a closed area”. A more useful measurement is the weight – the complete package of stove, igniter and bag comes in at 191g, a very respectable weight compared to the weight of a multifuel stove. It’s clear that Kovea have designed this as a gas stove – rather than modifying a liquid fuel stove – and the benefits are clear. Of course, a stove that can use a variety of fuels could also be desirable, not least financially, but I’d wager that the liquid fuel function of a multifuel stove is wasted on many backpackers who (sensibly) prefer the ease and cleanliness of a gas canister over smelly petroleum distillates. As a remote gas canister stove the Kovea Spider is nothing short of excellent – with the evenings getting colder and alternative stoves beginning to struggle it’s defintely worth a look.

Have your say on the forum