David Lintern looks at 5 ways to be better prepared in the hills.

There’s something to be said for thinking about how much we’re hauling up those hills, on our backs, bellies or feet. The phrase ultralight may come and go, but it’s not all marketing. More interesting for me is one of the tenets of going lightweight; abstraction. What items have a shared use? What can I do without altogether, and what constitutes cutting it too fine? What knowledge I can carry, instead of kit, which makes my outdoors life simpler, safer and more enjoyable?

I rarely think about the weight of my gear anymore, but I think about efficiency and preparedness all the time… because knowledge and preparation weigh nothing.

For years I didn’t bother with an emergency shelter, but now I take others out on the hill it goes in the pack every time. I think of it as a frameless tent, and like a tent, getting out of the elements can make your lunchstop much more comfortable and less fatiguing. Less like a tent, sitting inside can be a little claustrophobic and condensation can build up quite quickly… but on the other hand; it’s a lot quicker to get into a bothy bag than put up a tent, and the non breathable fabric means body heat is contained and the windchill kept outside where it can do you less damage. In an emergency situation in bad weather – if you or someone you are with is injured and can’t move – a bothy bag can save your life, it’s as simple as that. 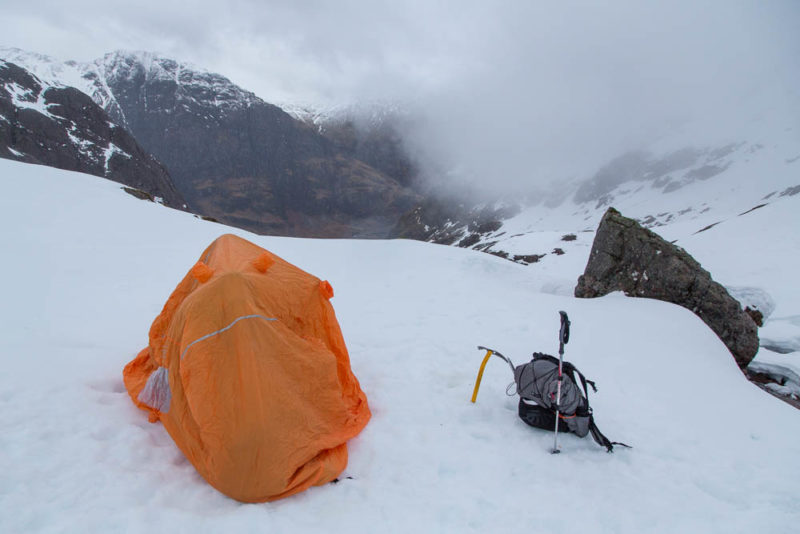 Bothy bags are made by Rab, Terra Nova, Lifesystems, Vango and others. They come in varying shapes, sizes and are often a bright colour for high visibility on the hill in an emergency. Most are waterproof, all are windproof, some have clear plastic windows, and/or little sleeves to put a walking pole in to prop them up. It’s a good idea to size up… a 2-person bag is very snug for 2, and so on. They aren’t cheap considering what they are, but you won’t be thinking about the money you saved if you’re freezing to death with a twisted ankle… 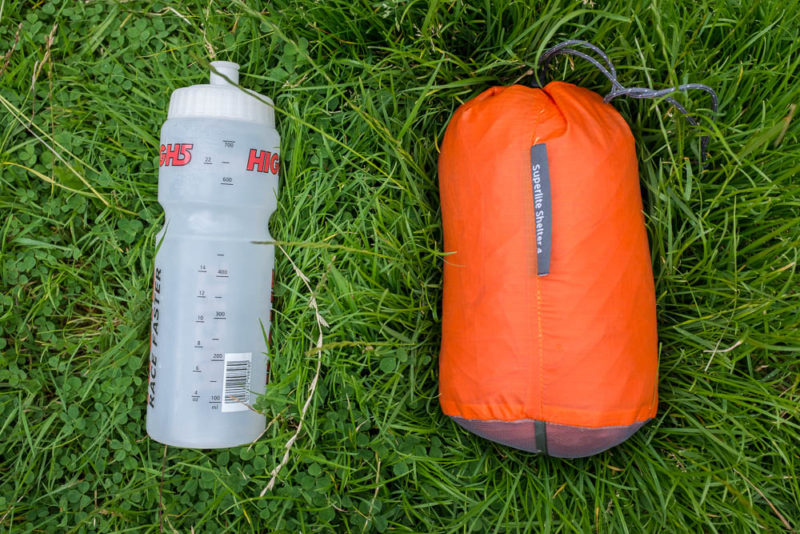 It’s stating the obvious, but all the gadgets and safety measures in the world count for nought unless you know how to navigate. I’ve covered this ground before on Walkhighlands, so I’ll just add a low tech aid here: Take a map case! Many wiser folk than you and I have come a cropper when their brand new map turned to pulp in driving rain. It’s down to preference, but I like to print my own maps and use an A4 waterproof case, because I find the standard sized cases too flappy and cumbersome in high winds. 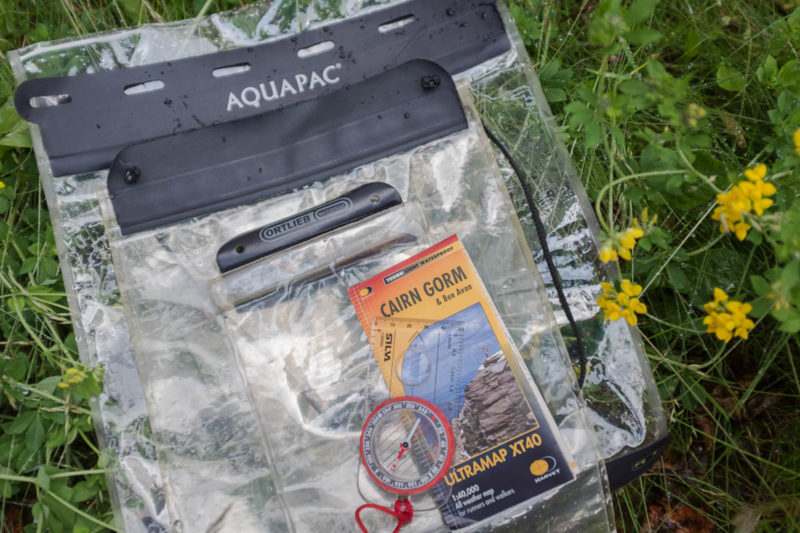 Also pictured here is a smartphone case. My own view is that for mountain walks, a phone or other GPS can be very useful as a backup, but a paper map and compass are primary. But however you are finding your way around, it’s easy to get rusty if you aren’t using the skills frequently, so if you’re not sure, take a course. When you need them most won’t be under blue skies and a cool breeze: It will be howling, you’ll be soaked, cold and tired, and your mates will be shouting at you to sort it out.

It goes without saying that being fit makes the hills easier and more enjoyable – but getting fit, now there’s the rub. I hate gym routines and my idea of training is the first 2 days of a long walk, but I’ve recently had a layoff from big mountain days out for family reasons, and felt my fitness suffer as a result.

Chris Highcock’s e-booklet Hill Fit concentrates on building strength as a means to an end, not an end in itself, and has been very useful in keeping my basic fitness levels from sliding into total degeneracy. Chris is Edinburgh’s depute returning officer, and he brings that thoroughness to his self-published and fully referenced book… but the writing style is down to earth, encouraging without being patronising, and aimed squarely at hillgoers – there’s even the odd bit of swearing to help us curmudgeonly types feel at home! Chris points out that a lack of muscle strength increases the chances of injury, placing extra strain on our joints and heart. We also lose muscle mass as we age. In this updated version of his book, he presents a persuasive amount of evidence for concentrating on strength training for hillwalking over other exercise types, before illustrating simple exercises to improve strength, balance and walking posture. He also applies the hard work at home to the outdoors terrain we know and love, which makes for very reflective reading.

I’ve learnt that exercise doesn’t need to be complicated or fast to work and be fulfilling – slow, very simple repetitions that include add ons or ‘progression’ have enabled me to stick at it, and feel stronger. There’s very little equipment needed and nearly everything he suggests can be done at home. I think it’s a great book especially if, like me, you loathe the idea of gym exercises.

A few months ago I found myself first on the scene at a traffic accident in the mountains, with scant mobile coverage and very out of date first aid skills. A man’s life depended on me, and although I busked my way through and the situation resolved itself well in the end, the experience brought me up short. It could be you…

Since then, I’ve attended a short course with Kevin Maule at The First Aid Training Coop, which was superb. Over the course of an afternoon, we talked through the different disasters that can befall us on the hills, whether we’re walking, climbing, cycling or paddling, and the different methods of coping when things go belly up. The Co-op’s style of teaching is very much ‘learn by doing, not by listening’ so there was plenty of time for swapping ideas and hands on practice of treating different wounds. Despite considering the worse case scenarios, it was great fun. Perhaps the best thing about this course was that it was geared up for outdoor enthusiasts, and so all of us were encouraged to think about what we had in our packs that could be used to ‘manage and package’ ourselves or another casualty… and that even included the packs themselves (using a daysack as an arm sling). Thinking about how to use the stuff I carry anyway – duct tape, walking poles, buffs, or even cycle inner tubes, to provide support for a wound was perfectly pitched and ties in perfectly with that idea of preparedness – what knowledge can be carried in the brain to save carrying extra gear in the pack. The course I attended was only really a taster for their proper courses, but I’ll definitely be back for more.

It’s the last resort, calling for help – or, at least, it should be. We have a strong tradition of self-rescue in the UK mountains and I don’t want to see that eroded. But when all else fails and you can’t get off the hill on your own, a mobile phone is useful… until you find yourself without signal. For the last 8 months, I’ve owned a Personal Locator Beacon. These will be more familiar to sea kayakers, but in 2012 the use of PLB’s became legal for overland trips, and can now be registered to individuals rather than vessels. This is useful for me as a boater contemplating a big trip next year, but it’s been with me for last winter season’s hill walking and mountaineering, too. It’s piece of mind, both on my own and with others. I’ve not had to put the device to the test and hope I never will, but I think it’s a very useful backup:

Firstly, there is no temptation to call Mountain Rescue just because of a sore ankle – this is an emergency distress beacon, and needs to be sent back to the manufacturer for resetting if it’s used – so if you pull the safety tab and press the button, it had better be life or death! Secondly, my McMurdo Fastfind unit has begun to use the new MEOSAR satellite system, which improves performance by triangulating a larger number and wider variety of satellite signals. Third; it maybe expensive (around the £200 mark) but there are no yearly subscription fees, it can be used around the world and doesn’t rely on call centres. It’s also small, tough and lightweight, and the battery lasts for around 10 years. Lastly, each device must be registered to you personally, so information about who you are, your typical outdoors activity and perhaps even relevant medical conditions can be kept on file. Should this information ever come into play in extremis, it could help the emergency services expedite your rescue. If I had any doubts about devices like this leading to the misuse of Mountain Rescue services, safety experts have dispelled them. Heather Morning, Mountaineering Scotland’s safety advisor, carries one in her pack lid, wrapped in cellophane. Additionally, the captain of Prestwick SAR also sung their praises when I met him and his crew recently, claiming that their aircraft navigation systems were able to lock into a PLB beacon to within a metre of accuracy.