Police have searched an estate in the Cairngorms National Park following the mysterious disappearance of a tagged sea eagle in the area. The bird, which was the first sea eagle to fledge in Fife in 200 years as part of an re-introduction project, had been fitted with a satellite tag with the last recorded location being on the North Glenbuchat Estate in early April. 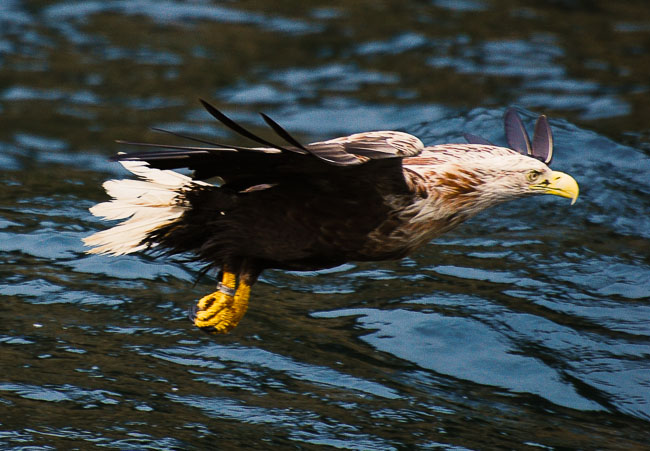 Sea eagle off coast of Skye

Since then there have been no sightings or transmitter signals from the bird. Police Scotland said: “We are concerned for the welfare of a white tailed eagle and enquiries are ongoing to locate the bird. Around April 10, 2014, we became aware that the bird was missing from the Glenbuchat area of Strathdon as there were no further recordings from its transmitter.

“There is concern for the welfare of this very rare bird. As a result searches have been carried out in the area on both land and within premises.”

Much of the North Glenbuchat Estate is given over to driven grouse shooting and there have been a number of both proven and alleged incidents of persecution of birds of prey in the area in recent years. In 2006, the then head gamekeeper on the North Glenbuchat Estate was convicted of poisoning wild birds and possessing an illegal pesticide. In 2011 the body of a poisoned golden eagle was recovered from Glenbuchat and RSPB Scotland said during the subsequent Police investigation that poisoned bait, a poisoned buzzard and a shot short eared owl were discovered.

According to the campaign group Raptor Persecution Scotland, “a number of young satellite-tagged eagles have all mysteriously ‘disappeared’ in this area over the last few years, including one in September 2011, one in February 2012, one in May 2013 and now this latest one in April 2014. Including the poisoned golden eagle found in 2011, at least five young eagles are presumed dead.” The organisation points out that these disappearances were of tagged birds and it believes that there may be a much higher number involving non-tagged protected birds of prey.

The missing sea eagle was the first chick to successfully fledge as part of the East Scotland Sea Eagle Reintroduction Project. Last year the first nest resulting from this project, which is run by SNH, RSPB Scotland, and Forestry Commission Scotland, with additional lottery funding, was attacked and destroyed.

Police Scotland have asked anyone who was in the Glenbuchat area around 10 April and who may have any information to contact them by dialling 101.