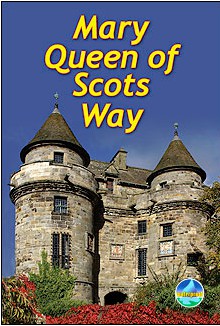 Another long distance route, and another guide from the reliable Rucksack Readers series. The Mary Queen of Scots Way is an unofficial new route which crosses central Scotland from coast to coast, passing through many places strongly linked with Mary Queen of Scots. Running for 172 km (107 miles) from Arrochar on Loch Long to St Andrews on the Fife coast, it crosses Loch Lomond by ferry to Inversnaid and then goes through Aberfoyle, Callander, Dunblane, Tillicoultry, Glendevon, Glenfarg, Falkland and Ceres.

The route is intriguing and should appeal to walkers wanting a fairly low level, accessible, multi-day walk with the satisfaction of crossing the country as well as being able to stay in interesting places, many of which have castles or other historical sites to explore. The whole route is ideally a summer option as the ferry across Loch Lomond does not run in the winter months, however the route could be started from Inversnaid on the east side of Loch Lomond. The guidebook tackles the route from west to east so that the prevailing winds are likely to be behind you. The route is not waymarked but the Rucksack Readers guide provides detailed instructions as well as a pull-out map, although you are advised to carry the relevant OS sheets as well. This is sensible advice as in places it can be slightly hard to work out if the route is on a path or a road if using the guidebook map only, but combined with the quality instructions and OS mapping there should be no difficulty.

Printed on robust water-resistant paper and spiral bound, the guidebook has a good selection of photographs and enough background information on wildlife and history as well as good practical pointers on transport, accommodation, taking dogs etc, to whet your appetite for the route and enable you to plan a trip properly.

Author Paul Prescott is a keen hillwalker who has climbed over 200 Munros and organises the Callander Ramblers. He has been working on this route since 2006, having set out with the goal of avoiding road walking. The Mary Queen of Scots Way looks set to join a growing number of unofficial long distance routes championed by enthusiasts such as the East Highland Way, the Skye Trail, and the Stevenson Way. The Rob Roy Way, which runs from Drymen to Pitlochry, started out in this way and has recently gained official status as one of Scotland’s Great Trails, joining 21 other routes including the West Highland Way and the Speyside Way.