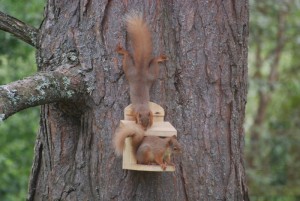 A pilot scheme, thought to be the first of its kind in the UK, is set to begin in Aberdeen this weekend (Sat 2 October 2010) to encourage city dwellers to report when and where they see squirrels in the city by sending a text message from their mobile phone.

Aiming to collect data on squirrel distribution in Aberdeen to help wildlife experts get a better picture of the population size and movements of both squirrel species, reports of red and grey squirrel sightings can be made by texting the word RED or GREY and where it was spotted – which could simply be a postcode, city street name or park name, followed by your own name – to 88802.

Walker said: “As far as we know, this is the first time a scheme like this has been used to collect records on the movements of wild animals. Most people carry a mobile phone when they are out and about in the city, so we hope that the ease of texting will encourage more people to report their sighting when they spot a red or grey squirrel. And, as an added incentive, 30 entrants picked at random at the end of the campaign will also receive a specialist red squirrel book as a thank you for reporting their sightings.

“We have the atypical situation in Aberdeen of both red and grey squirrel populations still living within close proximity in the city centre. We know that small pockets of red squirrels are thriving in Hazlehead Park as well as in the woods of Foggieton and Countesswells just north of Bieldside, Craibstone, and Milltimber, Bieldside and Cults. There are even thought to be some in Seaton Park next to the University of Aberdeen.

“This situation is unusual, as in most other cities in the UK, the presence of the grey squirrel has led to the almost complete eradication of red squirrel populations which used to live there. However, with grey squirrels only being present in the north east since 1970, our red squirrels are still present here.

“We must act now to maintain a barrier between thriving red squirrel populations and the grey squirrels which out-compete our native species and are the main cause of the red squirrels decline. This will allow red squirrels to thrive and their numbers to expand.”

Alister Clunas from Aberdeen Greenspace Trust, a supporting funder of Saving Scotland’s Red Squirrels, said: “Aberdeen Greenspace is pleased to be a partner in funding this important project to promote red squirrel conservation in North East Scotland. This is a great opportunity for the public to become involved in the project by reporting squirrel sightings. We hope that the results will show the red squirrels colonising new areas of the city.”