Portree, Trotternish and the Braes

Trotternish is one of the most spectacular landscapes in Britain. The great ridge which forms its backbone is the longest on Skye, and its unique eastern escarpment has been broken by Europe's largest landslides into a remarkable landscape.

The coastline is equally spectacular. Whilst the Kilt Rock and its waterfall are well known, much of the rest of the peninsula is bristling with sea stacks and pinnacles, its hidden features revealed only by walking; the northernmost peninsula Rubha Hunish and the easternmost Rubha nam Brathairean deserving special mention.

The Braes region to the south has a similar feel to Trotternish, but on a smaller scale, and good beaches at An Aird. Between Trotternish and the Braes is Portree, Skye's picturesque and bustling capital. 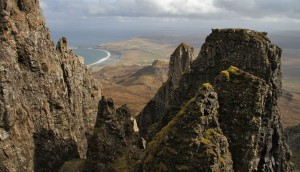 Ben Dolphin discovers the massive landslides that have formed the remarkable landscape of the Quiraing.

"As you drive the single track road along the Trotternish peninsula’s east coast, you’re probably intermittently snatching glances out to sea or up at the hills. And who could blame you? It’s beautiful! You could therefore be forgiven for not noticing the signs indicating roadside maintenance..."