A guide to Scottish heathers

If you’ve been out in the hills lately you’ll hopefully have noticed shades of purple and pink standing out against the otherwise green landscape. Certainly that’s been my experience on two recent walks, one up Beinn a’ Bhuird via The Sneck in the Cairngorms and one along Loch Turret in Perthshire.

The different shades I saw on those walks are the ones that accompany summer’s inevitable slide towards autumn, as the heathers burst into flower. 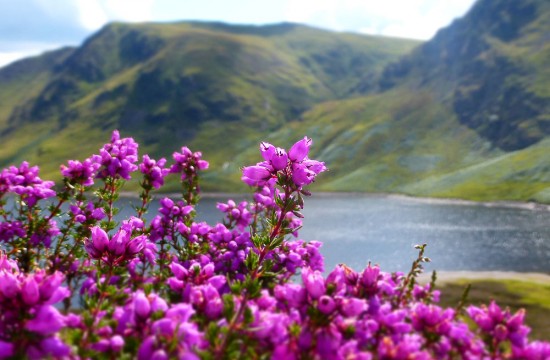 I say heathers with an ‘s’, using the plural, because there are many species and it’s a name used quite widely (and loosely) to describe any number of short, woody plants with purple or pink flowers.

But in Scotland there are three principle species of heather you’re likely to encounter, all of which contribute to our purple hill scenes to a greater or lesser extent.

All three heather species are closely related by virtue of being in the same wildlife ‘Family’ of plants, the Ericaceae, which is derived from the Greek ‘Ereike’, meaning heather.

It’s a broad family that includes other familiar plants like rhododendron and blaeberry, but perhaps its most famous member is Calluna vulgaris, or Common Heather. Most sources I’ve read assure me that Calluna derives from the Greek word kallunein and that it means to sweep, to cleanse or to beautify, depending on the context. This harks back to the plant’s traditional use as a twiggy sweeping material for brooms.

This is of course the heather we romanticise and wax lyrical about. The one that works its magic on entire landscapes and the one we are referring to when we talk about ‘heather’ in a general sense. Some folk might know it by another name, Ling. That’s derived from the old Norse word ‘Lyng’, and I can personally attest to that Scandinavian link.

I visited friends in Norway in 2012 and it just so happens they live in a village called Lyngdal. I knew heather was also known as ling in the UK, but I hadn’t made the Norse connection in my head until I saw heather for sale outside a shop with the word ‘Lyng’ next to it. It instantly made sense. Lyngdal = Heather Valley.

As for the word Heather itself, it is believed to be derived from the Scots word haeddre, which was seemingly used to describe a ‘heather place’ or heathland.

Whatever name you use, common heather is by far the most dominant of the heather species and indeed one of the most widespread of all plants in Scotland.

The other two common Scottish species belong to a sub-division of the Ericaceae family called Erica, or Heaths. These are Bell Heather and Cross-leaved Heath. And yep, I know it’s not particularly helpful that one has the word ‘heather’ in its name and one has the word ‘heath’. But rest assured, they are both heaths.

Identifying our heaths and heathers

All three are short-leaved evergreen plants with purple or pink flowers, but when they are seen together the common heather is easy to pick out on account of its flowers’ shape. 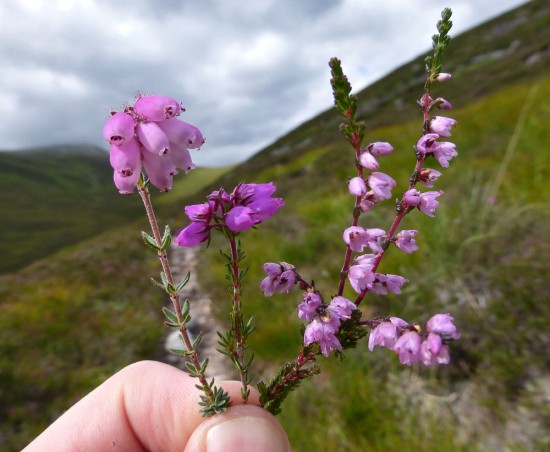 As you can see in the above photo, cross-leaved heath and bell heather have bell-like flowers concentrated in a clump at the top of the stems. The flowers are actually made up of four petals, but these are fused together to form a tube and this is what gives it the distinctive bell appearance.

Common heather’s flowers are arranged in a wider distribution along the stem, and they have distinct petals that give them a more familiar ‘open flower’ appearance.

The flower colour is a tell-tale sign too. The heath species tend to be more noticeable as individuals or small patches, where their large and lurid flower heads draw the eye in otherwise uniformly-coloured landscapes.

This is especially so with bell heather whose vivid purple is the most striking of the three. A sizeable patch of bell heather is certainly a much more eye-catching sight than an equivalent sized patch of common heather.

We tend to think of common heather as being a lovely deep purple colour on the hillside but, when seen alone, a single plant is actually quite a plain sight and can easily be overlooked. Even though its shades can vary with location and time of the year, common heather’s colours are still relatively muted. Cross-Leaved Heath is somewhere in between the other two with a pale pink, sometimes pinky orange flower, looking a little washed-out or bleached.

Despite common’s heather’s relatively muted appearance, its sheer abundance and profusion leave you in little doubt as to which one you are looking at. Bell heather can grow in rather large concentrations but they’re just that. Concentrations. Common heather, on the other hand, grows everywhere!

This is because while all three plants are rather hardy, common heather is especially so. Admittedly it grows in a somewhat stunted form the higher up a hillside you go, but its tolerance of cold, wind, altitude and salty sea-spray means it can grow just about anywhere from sea to summit, thriving in environments that most other plants would baulk at the thought of.

It mightn’t have the gaudy purple of Bell Heather but what it lacks in gaudiness it more than makes up in range and the number of flowers on each plant. As a result, aided by human management of moorlands, common heather grows so widely and flowers so enthusiastically that it is able to change the colour of entire hillsides in summer.

Of course, finding these three heathers handily growing together so that you can make a visual on-the-spot comparison isn’t assured. So if when faced with a lone heather you’re still not sure which one it is, or if it’s Winter or Spring and there are no flowers to see, then the leaves should give it away.

Common heather’s leaves overlap one another, are short and grow in dense concentrations, whereas the heaths have ‘whorls’ of needle-like leaves that occur at more spacious intervals up the stem.

Telling the difference between the two heaths is more problematic as they are superficially similar to one another but, as the name suggests, cross-leaved heath has crosses of four leaves radiating out of its stem. Bell Heather has whorls of three leaves, not four, although they can be difficult to discern sometimes.

Cross-leaved heath also has rather obvious hairs on its leaves. These give the plant a faintly greyish appearance when viewed from afar and make the whole plant look a bit paler than bell heather.

The kinds of environments you find heaths in and the other plants they’re growing with are other useful aids to identification. Though they both thrive in the generally damp uplands of Scotland, there’s damp…..and then there’s damp.

Bell heather is no lover of boggy places and will favour the drier, better-drained surfaces. Cross-leaved heath favours the opposite and will be found flowering on the fringes of bogs and wet places alongside other bog-loving species.

At the moment (in July and August) such species are ones like bog asphodel, a striking and beautiful orange-yellow flower that is currently dotting many a highland glen. 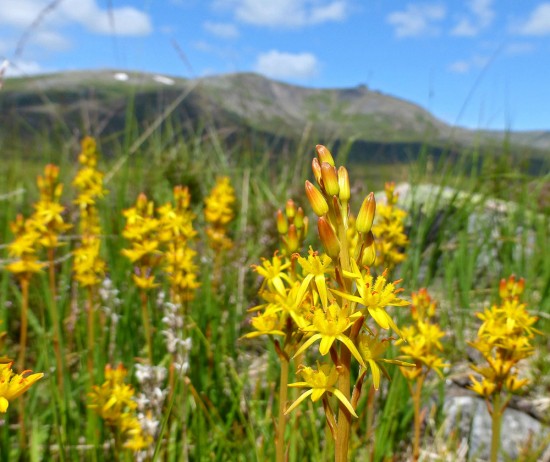 Seen together, cross-leaved heath and bog asphodel scream ‘BOG’ loudly and mark the wet places like wee flags, whereas the lurid purple of bell heather poking through stands of common heather tends to indicate where the drier ground might be. Who knows? If you’re someone who eschews paths in favour of the open hillside, that could make the difference between dry boots and wet, squelchy boots.

“But EVERYWHERE is wet in Scotland”, I hear you say.

Well, naturally there are no cast-iron guarantees in this regard. This is Scotland after all, where water clings to slopes at angles that defy gravity and physics. But this general rule is still a good one to know, and hopefully it illustrates why being able to identify plants in the field can assist you in reading the terrain on the hill, and better understanding the lie of the land beneath your feet.