A visit to Colonsay and Oronsay

You might imagine a tiny, low-lying Scottish island in the middle of the Atlantic, 20 miles from any other community and with only a lighthouse between it and the coast of Canada to the west, to be an inhospitable place.

Indeed, the Hebridean Isle of Colonsay, measuring only 10 miles by two miles if you include its even smaller “semi-detached” neighbour Oronsay, is inhabited by fewer than 150 people and requires a two-hour boat trip from the Scottish ferry town of Oban, available once a day in summer and three times in winter.

Of course, many islanders are keen to encourage visitors to part with their money, for tourism is vital to their economic sustainability, but at the same time it can feel as though you are a long-lost friend; someone to wax lyrical to about the virtues of their precious home and to add variety to a community that must, at times, feel rather claustrophobic. Festivals throughout the year, including a Book festival in April, May’s Festival of Spring, the acclaimed music festival, Ceòl Cholasa in September and Connect with Colonsay in October, have been cleverly created and marketed to bring regular crowds to the island.

Contrary to expectations, too, the west coast location of Colonsay enjoys a warm and often favourable micro-climate. With no hills over 143m (470ft) and most a lot lower, rainfall is below the average of the west coast Scottish mainland. Colonsay also boasts above average sunshine during long and light summer days. A soft sea or land breeze is usually enough to stop the fabled Scottish midge becoming a pest, although this I have only heard said by the locals.

Even the autumn and winter months can be surprisingly mild, with frost and snow a rarity.

The island’s remote location brings other advantages, such as a fabulous get-away-from-it-all atmosphere. The two-hour CalMac ferry journey is the perfect length to relax and forget the stresses of everyday life on the mainland. Disembarking at the pier in the main settlement of Scalasaig feels like you have stepped back in time to a far simpler way of life.

Being an island also affords Colonsay’s inhabitants – and visitors – stunning uninterrupted views over an every-changing seascape. Whether it’s the far distant horizon or the outline of the larger neighbouring islands, including Mull to the north, Jura and Islay to the south and east, Scarba in the north-east and, to the south-west, just visible from a high point on a clear day, Donegal in Ireland, the vistas are frequently breath-taking.

On so many occasions, while exploring the island, I would call for my partner to stop the car “now!” so I could jump out to snap a photograph, or come to a sudden halt during a hike so I could turn a full 360 degrees to take in yet another incredible panorama. Despite its size, many visitors to Colonsay are surprised by the amazing diversity of things to do, from more traditional pursuits of kite-flying, rock pooling, collecting shells, especially pretty cowries, picnics, walking and cycling to surfing, body boarding, exploring caves and bee keeping courses.

One short trip is rarely enough and accommodation providers talk of many repeat customers. The toughest decision is often, “what shall we do first?”

My recommendation, before leaving Scalasaig, is to buy some provisions. The island has only one shop, which although amazingly well-stocked is open only until 5.30pm from Monday to Saturday and sometimes for an hour on a Sunday.

There are two cafes and a hotel with a great restaurant, but if you want to enjoy time off the beaten track – and you surely will – you’ll need to take sandwiches and snacks with you.

A stroll on an easily accessible beach is a good way to slowdown to island time. Kiloran Bay is a hop and a skip from the roadside in the north-west of the island and a 10-minute drive form the pier.

The crescent of golden sand can be wild and uplifting on a blustery day or supremely tranquil when conditions are calm. Families will enjoy kite flying or hours spent paddling and making dams in a natural lagoon at the southern end of the beach.

The Atlantic rollers offer a hotspot for surfers or bodyboarders, while calmer seas are ideal for kayaking if you have your own craft. If you fancy, return after nightfall for a spot of stargazing. Low levels of light pollution across the island offer great dark sky opportunities.

Balnahard Bay in the north-east corner of Colonsay requires a walk of around 45 minutes, or 20-minute bike ride, on a track. The rewards are a fine, sandy beach, perfect for a picnic, and views towards Mull, Scarba and Jura. From here you can also walk to the most northerly most tip of Colonsay to see a huge natural stone arch.

There is no shortage of atmospheric locations for a walk or a hike. Walk to Balnahard and another bay, Traigh Ban, or, from Kiloran, you can hike the beautiful route of Dun Uragaig and Loch an Sgoltaire.

The island’s highest points of 300ft or more are the focus of MacPhie bagging, Colonsay and Oronsay’s answer to Munro bagging.

The brainchild of long-time resident and former hotel owner Kevin Byrne and Colonsay farmer David Hobhouse, MacPhie bagging is a challenge of some 22 peaks over about 20 miles across both islands.

Although many of the MacPhies require an ascent on over-grown, off-track terrain the rewards are found aplenty in the superb views from every corner and angle of the two islands.

It’s easily possible to walk a handful of MacPhies in one outing, such as four, A’ Bheinn Bheag, Carn an Eoin, A’ Bheinn Bhrare and A’ Mhaol Bhuidhe, to the north of the island starting and finishing at the road close to Kiloran.

The higher-level views from this area of Colonsay are impressive, taking in the wide landscape of the island itself, a vast ocean and the neighbouring isles of Mull, Coll and Tiree or Jura and Islay, depending on which direction you look. 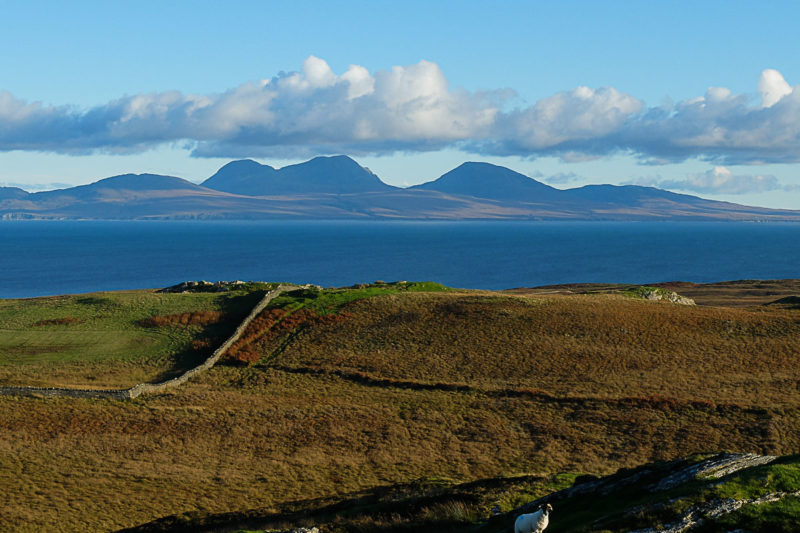 On the western coast, another six MacPhies take baggers high above steep cliffs, which give yet further wide-open vistas of dazzling or brooding seas, depending on the weather, and precipitous views down to the sea, where it crashes fiercely against the rocks.

The cliffs are also home to large colonies of seabirds, notably fulmars, guillemots, razorbills, kittiwakes, shags and all types of gull. In fact, the island is an ornithological dream with many different natural habitats, including ancient and cultivated woodland, moorland and peat bogs, farmland, meadows and the machair providing a home to an array of bird species.

The corncrake, one of Britain’s rarest birds, is Colonsay’s most famous residents and is part of the reason for the RSPB’s permanent presence on Colonsay and Oronsay.

There are also seal colonies that live on offshore islands off Oronsay and the south west coast of Colonsay. The island is home to otters, too, but while you may see their find distinctive tracks, spotting one of these elusive creatures is down to luck.

More unusual inhabitants of the eastern coastline of Colonsay are the wild goats, reputedly the descendants of Spanish goats carried on an Armada vessel shipwrecked on Colonsay. Believe this if you want, but it’s a beguiling sight to turn a corner on a path to be confronted with a herd of a dozen or so woolly goats.

Colonsay’s coastal “machair” is the location for another natural wonder, an 18-hole golf course. The sandy subsoil and grass is kept close-cropped by sheep and rabbits and while golfers need to adapt their normal putting style to the uneven Colonsay greens, playing a round here is a truly memorable experience.

Colonsay and Oronsay also boast a rich and varied plantlife. The woodland gardens surrounding historic Colonsay House are acclaimed for the collection of colourful rhododendrons, as well as mimosa, eucalyptus and palm trees, all of which benefit from the isle’s mild climate. Early summer is the best time to appreciate the woodland gardens.

On Wednesdays in summer the private formal gardens immediately surrounding the house are opened to the public.

Whatever the time of year, Colonsay is resplendent in the bright hues of flowers, with bluebells and primroses in spring; heath orchids, wild roses, honeysuckle and fuchsia in summer; and yellow irises and heather in the autumn. Keen walker Byrne leads regular – and some might say, quirky – Fern Appreciation Walks. There are thought to be around 13,000 species of ferns in all – and on Colonsay there are at least 33 varieties to spot.

The island’s botanicals, including lemon balm, meadowsweet, wild water mint, heather flowers, bog myrtle and sea buckthorn, have also provided the ingredients for the island’s latest taste sensation, Wild Island Botanic Gin. An invention of Colonsay Beers – Colonsay is the smallest island in the world with its own brewery – the small batch gin is described as “exceptionally smooth”.

Other must-tastes on Colonsay include the wildflower honey – produced by Scotland’s only legally-protected colonies of native black bees, home-bred oysters – often on the menu at the Colonsay Hotel – and prawns, which can be bought from fishing boats tie up at the pier.

For those that enjoy making their own catches, the lochs and coast of the island are attractive for anglers. Colonsay Fly Fishing Association gives access to fresh water fishing, mainly for brown trout, while sea fishing usually lands pollock, and sometimes mackerel.

Loch an Sgoltaire (Loch of the Cleaver), north-west of Kiloran settlement, is also popular for fishing. An island in the middle of the loch is home to a Victorian-era summer house, but was once the site of a fort. This 16th century relic is just one of numerous examples of a long historic timeline. It’s believed there were humans on Colonsay dating to 7,000BC.

As you explore, especially on foot, you’ll come across Iron Age forts and duns and even an abandoned village, Riasg Buidhe, which was inhabited until 1918.

However, of all of the historical artefacts, the priory on Oronsay is the most impressive. It was founded by the Augustinians in the early 14th century and became an important religious centre for the next two centuries. The ruins are well-preserved and there is a fascinating collection of carved gravestones.

You can find out more at the Colonsay and Oronsay Heritage Trust centre at Port Mòr, on the western side of Colonsay, around three miles from Scalasaig.

Alternatively, why not pay a visit to Oronsay? It’s a magical experience because you can only cross The Strand, a 1.5km causeway, at low tide. Tide charts can be found at the Post office of the ferry terminal. Follow this route for Oronsay & The Strand.

Oronsay’s highest point, Beinn Orasa, is also a MacPhie and thanks to a well-trodden path it’s just a short hike to a lofty summit at 305ft (93m). The views on a clear day are particularly stunning, taking in Jura, Islay, the mainland – and back over the undulating landscape of Colonsay. There can be no finer place to end a trip to these beautiful islands, except perhaps a final pint of Pig’s Paradise Blonde beer, made by the Colonsay brewery obviously, in the busy hotel bar. This is where everyone collects, locals and visitors, to exchange god-hearted banter before the ferry back to the mainland.

Visit our guide to Colonsay and its neighbours, Islay and Jura