It’s the people you meet I spend a lot of my time outdoors alone, and I wouldn’t want to change that. I value the solitude, even the loneliness when it comes, it allows me to process some of the flotsam and jetsam I don’t pay enough attention to ordinarily. It also allows room for personal challenges – changing what’s achievable on my own terms. But after I met a few more like minded reprobates on a Mountaineering Council of Scotland course recently, I was prompted to think about all the people I’ve met through hillwalking, and what a huge difference they’ve made. The hills have changed my life, but so have the people I’ve met through them.

Once I started looking through the photos, I realised there’s a snowball effect. This verges on cliché, but as one meeting begets another, it slowly becomes a community of interest, a family of sorts. The internet can be a liberating tool to initiate the first meeting. So, I thought I’d pay tribute to just a few of the 2-legged wildlife I’ve enjoyed spending time with out there on the hill: 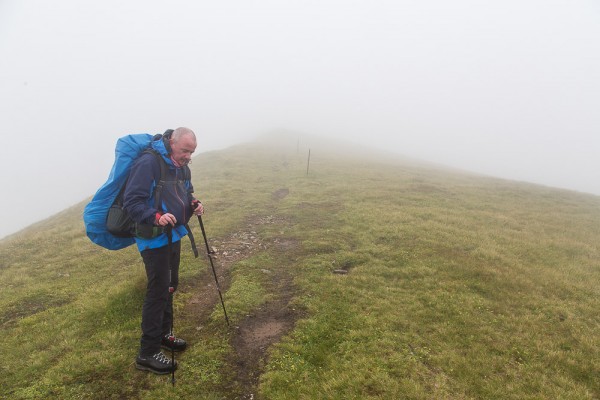 I met Mick on that MCofS course. Here he is thoughtfully pondering the extensive views we enjoyed on Creag Meagaidh recently. He’s a senior nurse in Glasgow. Something he referred to in general conversation made me dig a bit deeper over a pint, and it turns out we share a fair bit in common aside from the hills, politically and musically. He’s no slouch in the hill-walking department either – a much better pacer than I am. You don’t have to agree with either of us on music or politics but I can guarantee you 2 things – having Mick along means an interesting, thought provoking day, and he has a heart as big as Loch Lomond. I don’t know about you, but I can’t argue with that. This is Andy. He’ll be mortified if he sees this – as will all of the people here. There’s a modesty, an ordinariness about the act of hillgoing which makes it a great leveller, the perfect learning platform when shared. I met Andy through the internet – we both walked the Haute Route Pyrenees together the same year, and he got in touch beforehand. We ended up meeting twice en route, and then near the end – he’d transformed from someone who seemed a bit unsure of his depth in those mountains early on, to a semi feral, wiry through-and-through hiker. He was clearly in his element. The change in our confidence during that walk is something we’ve both remarked on since. It was one of many gifts we were granted. As we finished our coast to coast together, I learnt more about butterfly and plant species, navigation and environmental philosophy (in which he has a masters degree)… but most of all, how to walk in step with someone. Andy and I are very different people, but outdoors we’re simply a killer team. No alpha and no beta is probably a mountain leader’s idea of an accident waiting to happen, but when it works, it works. 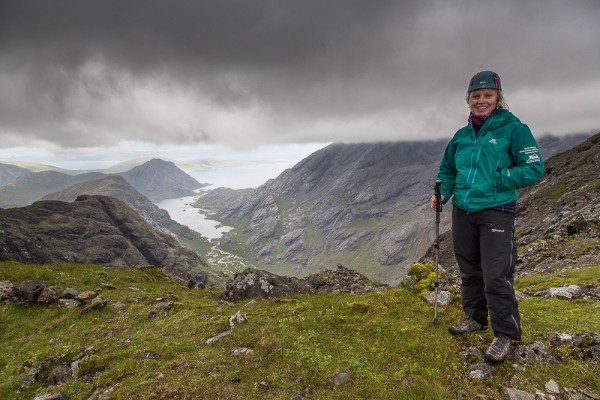 Here’s Heather. She was on that course I mentioned above, in fact she was the course leader! I was lucky enough to spend two days with Heather and others in her team, and once again, learnt a humbling amount. There’s a thing about people in the mountains: a generosity of spirit, a willingness to pass on the tools to encourage self-reliance. In addition, Heather also asked a lot of questions. Is a restless, enquiring mind a trait too? A curiosity to find out more, see what’s over the horizon? I think so. For my own part, spending time with professional mountain instructors made me realise their incredible attention to detail, the constant and ongoing risk assessment, often not even vocalised. It also made me aware of how much time, dedication and love goes into that work. Not that it is ‘work’ – it seems much more like a vocation. Talking of which, Lester, on the right here, one of many talented folks working for the John Muir Trust. He’s looked after his patch on Knoydart on and off for about 20 years. We once spent a spellbinding evening listening to the eerie cries of Divers echo across Loch Hourn and Grasshopper Warblers purr near the shieling we camped by. He tried to outrun me on the side of Quinag once too, but I kept up… just. You won’t find a man more in tune with his wild surrounds, or more at home singing its praises to those new to it, as I was. It’s always an honour to spend time with him. 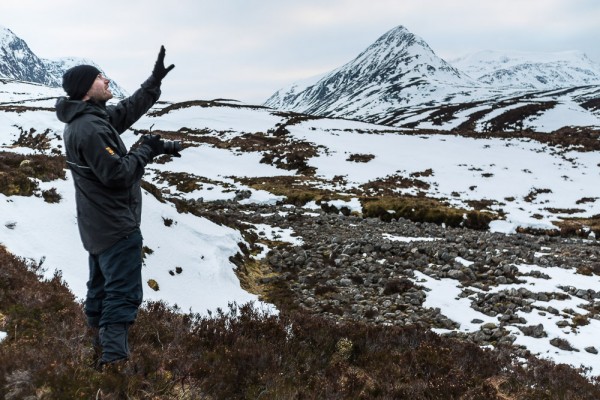 Is it always selfish, then? Am I only hanging out to learn? Yes, and No. Mostly I think it’s about the joy of sharing, in an environment that allows me to shed some of my everyday baggage. Fraser and I met up through the internet as well. We share a love of winter, peaty whisky, electronic music and taking photos. He’s a superbly subtle and nuanced photographer, a gentle man and a man who loves his country. That’s a beautiful, inspiring thing to be around – people that dare to care. At their best, the hills seem to bring the best out in people. The Highlands bring out the searchers and seekers, the adventurous in us. Alot of what little I know about water travel I’ve learnt from Dave here. Again, a good team – part cautious, part impetuous, and we’re both happy to put up with a fair amount of discomfort, which to be honest has been just as well.

Whether travelling through landscape with someone for a day or a week, I’m also aware I’m on an interior journey. Slowly figuring out when to give my companion some space, when and how to look out for them. There’s a fluidity to the give and take, dependent on the mix of human and environment. Getting the dynamic right on our shared adventure can be every bit as rewarding as bagging just another top.