Our Pick: walks from the Snow Roads

The Snow Roads is a 90 mile scenic route from Blairgowrie in Perthshire to Grantown-on-Spey in the Highlands. It includes the highest public road in Britain as well as several other passes which may be familiar through their regular mentions in winter traffic reports – as this is the snowiest part of the UK.

The Snow Roads can be used as a superb touring route in its own right, or as an approach to the incredibly popular NC500 route around the northern Highlands. Although the distance means that the Snow Roads can easily be driven in a day, to do so would be to miss most of what the stunning areas it passes through have to offer. One of the best ways to slow things down and immerse yourself in the landscape is to take a walk… so here we take a look at some of the best options to get out on foot from the road. The route begins in Blairgowrie, a market town in Perthshire on the southern fringe of the Highlands. Blairgowrie is also the start and finish of the Cateran Trail long distance walk – a superb 5 day trail that explores some of the landscapes that the first section of the road leads through, as well as a range of shorter walks.

The route initially follows the A93 up Glen Shee from the north of the town. The first really prominent hill is Mount Blair, which may be crowned by a transmitter mast but still offers a superb view and a grand objective for those new to hillwalking. The road leads on to the Spittal of Glenshee, where an old hump-backed bridge sits at the foot of Ben Gulabin. The Spittal is also the gateway to the first of the higher mountains along the route, being the usual start point for Glas Tulaichean and Carn an Righ, as well as a stopping point on the Cateran Trail. Beyond the Spitall the landscape becomes much barer as the A93 leads on into the uppermost reaches of Glen Shee – dominated by The Cairnwell. In times long gone a steep hairpin called the Devil’s Elbow made the drive up here a notorious one, but the road has long since been straightened out, now giving a straightforward drive in summer. In winter things can be very different, as the summit of the Cairnwell Pass is the highest point on the UK road network at 670m, and is frequently blocked following snow-storms. Here is one of Scotland’s largest ski-areas, and also the launch point for not just the Cairnwell and its neighbours but the popular Glas Maol group of four Munros on the opposite side.

On the other side of the pass the road leads down Glen Clunie towards Royal Deeside. There are more Munros for baggers accessible on both sides, but it is perhaps the lower summit of Morrone that makes the best destination for more modest hillwalkers – offering as it does a classic view into the high Cairngorms. If that’s too ambitious, try a wander amidst the beautiful Morrone Birkwood on its lower slopes. At the foot of the glen is Braemar, deservedly one of Scotland’s best known villages and a gateway to the southern Cairngorms. This is a superb centre for walks at all levels; an excellent choice is the short ascent of Creag Choinnich which gives fine views over the village and its immediate surroundings. From Braemar the Snow Roads route turns east, now leading through Royal Deeside and its beautiful native pine forests. Many visitors are looking for a sighting of Balmoral Castle – but you’ll need to turn aside to get a good view of the famous royal residence – either by visiting it, or perhaps trying our walk around the many Balmoral memorial cairns. 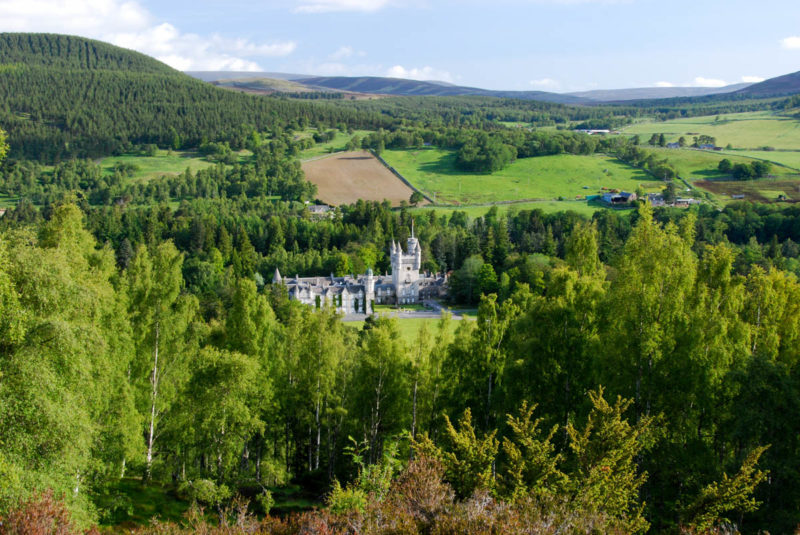 From Crathes a tiny road cuts north across the shoulder of Geallaig to shortcut the route across to Glen Gairn, taking in superb views of Lochnagar. The Snow Roads, however, continues east along the A93 to the beautiful town of Ballater which ranks amongst the most attractive in the Highlands. There are miles of great walks to explore here, with the oak-clad hill of Craigendarroch being a real local favourite. Leaving Ballater the Snow Roads route joins the A939 and climbs through the birchwoods of lower Glen Gairn before crossing what must be the steepest old hump-back bridge on any major road. The route then crosses another pass at 540m before descending to the River Don, and then climbing again past picturesque Corgarff Castle. From Cock Bridge there’s a zig-zag ascent as the route climbs to the next pass, the Lecht, passing one of the Snow Road’s art installations – four cowled metal seats, designed by competition winning architect John Kennedy. On the approach to the Lecht summit, and ski centre, the road follows a ridge with the ground falling away on both sides, giving superb views. 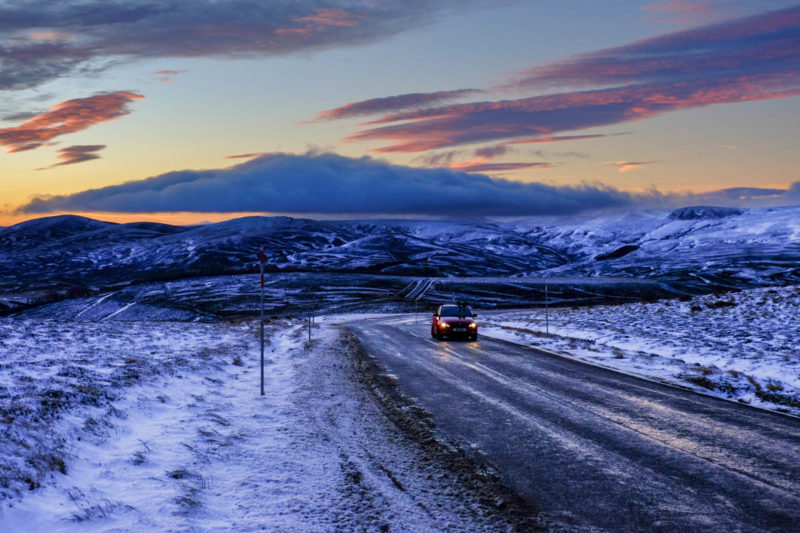 The descent is more confined as the road descends to Tomintoul – the highest village in the Highlands. Walks here range from short rambles around the village and viewpoints looking up Strath Avon, to moderate hills and mountain ascents. Beyond Tomintoul – above an old quarry – is another Snow Roads’ artwork, Still, a mirrored box for viewing the landscape which was designed by Glasgow-based architects Angus Ritchie and Daniel Tyler. The sharp descent and reascent at the Bridge of Brown is – with its notorious hairpin bends – the most challenging part of the whole Snow Roads drive. Beyond it the road climbs once more, over the shoulder of the Cromdale Hills, giving classic views towards the high Cairngorms. Finally the route descends for the final time, passing through the Caledonian Pines of Anagach Woods to reach Grantown-on-Spey, the historic capital of Strathspey. As well as its Georgian architecture, beautiful woods and river, Grantown makes a great base to explore the northern Cairngorms – well seen from the Dreggie or the Viewpoints walk above the town. The question now is – when are you going to begin your journey on the Snow Roads?