Osprey’s Tempest 30 litre pack has been my all-year rucksack of choice for the last 4 years, except when carrying a tent. It has seen me through numerous hill and lower level walks, my Munro compleation in the Skye Cuillin, a 10 day Tour de Mont Blanc, and a number of other Alpine hut trips and Scottish bothy multi-days involving walking and scrambling. Whilst it probably has a couple more years wear left, my old pack had abrasion holes in the bottom requiring DIY duct tape repairs and a few holes in the mesh on the back and hip belt pockets. I’ve been testing the latest version and have been delighted to see that Osprey has tackled the few niggles I had found with the previous design. The pack has numerous useful features whilst keeping to a reasonably lightweight and streamlined design.

The Tempest is Osprey’s women’s version of the men’s Talon pack, it also comes in a 20l version although the features differ. Particularly useful for shorter females, the women’s version has an easily adjustable back length which means you can mess around with it to get the perfect fit. Osprey say that the pack should be suitable for backlength measurements between 38-53cm – there is a smaller version but it’s not generally sold in Europe and at 5ft 2″ I’ve found that once adjusted its been very comfortable even with quite heavy loads. A sternum strap (complete with emergency whistle) can be adjusted up and down with a bit of effort but it doesn’t slip and this makes the strap much more useable for women who can sometimes find the boob-squashing position of fixed straps uncomfortable. With a heavier load the sternum strap holds the shoulder straps comfortably in place and helps distribute the load evenly. 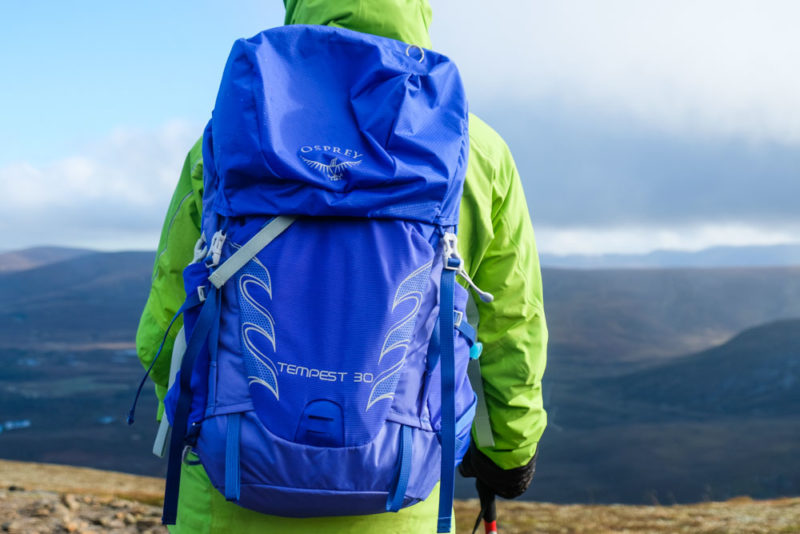 There is no rigid frame which reduces weight, instead a solid foam panel provides support and rigidity. A raised surface pattern and mesh covering keep direct contact to a minimum and the back relatively cool. I’ve removed the piece of foam a couple of times when I’ve machine washed the pack and although its a little difficult to ease it back through the zipped opening, it has retained its shape and use. The hip belt is wide and padded and does its job very well.

The sack has an array of features, especially given its light weight. A spacious zipped lid pocket is mirrored with a small under-lid pocket for valuables with useful key fob. Two side pockets will take a 1 litre bottle each. Here you can choose whether to have the compression straps on the outside (to secure items in the mesh pockets) or on the inside of the pocket (to provide more compression to the pack contents.) Changing between these two modes is fiddly and as I tend to use the pockets for small items I keep the compression on the outside and it works fine. There is a large mesh pocket on the back, useful for wet items, map or a mid layer. Forcing a helmet into this pocket (there’s no specific helmet attachment) had stretched and split the mesh on my previous sack over the years so I was pleased to note the mesh on the new version of the Tempest is more robust. There are two small pockets on the hip belt – previously mesh, these are now made from the same fabric as the sack and will therefore take sharp-cornered items like a compass. There is an attachment point for an led-light at the bottom of the back mesh and some reflective writing and logo on the back and hip belt. A separate reservoir sleeve is a useful feature as this can be filled without opening the sack. The sleeve fits the main hydration pack makes and there’s a handy loop to secure it in place as well as slightly fiddly elastic loops on both shoulder straps to hold the hose in place. There is no rain cover.

Two ice-axe loops with elastic ties two thirds of the way up the sack provide adequate storage for both axes or trekking poles. The Tempest also features Osprey’s Stow-on-the-go trekking pole attachment feature which allows you to quickly put poles away without taking the sack off. I find this useful for short sections of scrambling but the attachment point on the shoulder strap means the poles are kept at a diagonal angle that personally I find awkward after a while, so for sustained scrambling the poles will go vertically into a side pocket or ice axe loop. One superfluous feature that has been removed from the new design is the removable lid – this sometimes allowed water to seep into the top of the pack so its good to see Osprey are still intelligently adapting and improving their product. There just remains the mystery of the narrow mesh pocket on left hand shoulder strap – fitting an old-style GPS at a push, it’s too small for most phones and too high to secure the end of a hydration hose, so, with plenty of alternative pockets, its probably another feature which could go.

The pack is available in blue, green, black and magenta, and the men’s version is the Talon. Overall this is a superb, lightweight, hardwearing sack that has proved itself useful for year-round use on the hills – oh and with careful packing it easily complies with budget airlines’ cabin backage restrictions so is the perfect companion for trips abroad as well.