The Mountains Are Calling

IT seems that I meet more fell runners than walkers in the hills these days. The old safety cliches about not going hillwalking without waterproofs, spare hats and mitts, a warm drink and stout boots don’t appear to affect these mountain athletes.

Dressed in shorts and t-shirt, perhaps with a miniscule pack or a skimpy lightweight waterproof tied round the waist these guys and gals seem impervious to the cold and wet as they bound down the hillside with little obvious effect on hips and knees.

How I envy them.

Indeed, the most serious accident I’ve had in the hills was when I ran up my local hill, Creag Dhubh near Newtonmore, and fell badly on the descent. I ended up with a badly broken wrist, a broken ankle and forty stitches in my head. That was the end of my erstwhile hill running ambitions.

Over the years I’ve spoken to and interviewed many a fell runner. Most memorable was with the legendary Joss Naylor from Wasdale in Cumbria, one of my all-time mountain heroes, but I’ve never quite been able to fathom what it is that makes people trot up hills and then descend at breakneck speeds.

At least not until now. 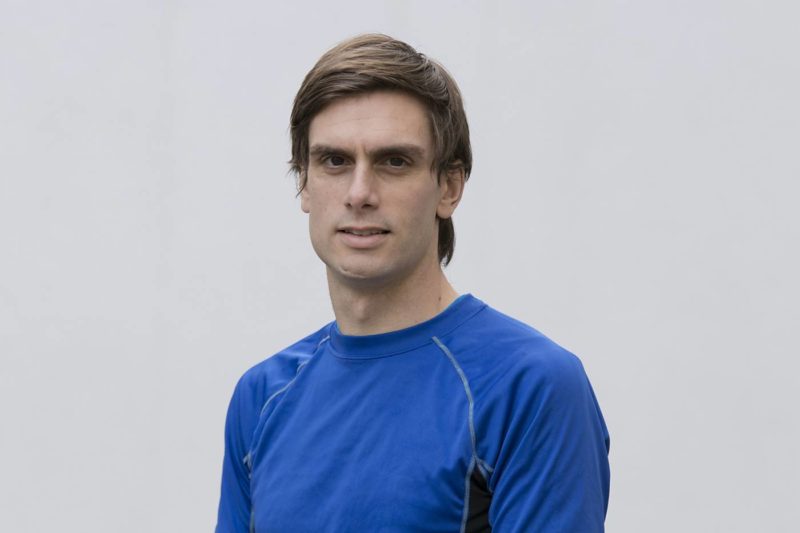 Jonny Muir is a writer, runner and teacher. As a nine-year-old boy growing up in Worcestershire he glimpsed the silhouette of a lone runner in the glow of a Malvern sunset. A fascination for running in high places was born – a fascination that would eventually call him to Scotland. Running and racing, from the Borders to the Highlands, the Hebrides to the Pentlands, Jonny became that mountainside silhouette that first inspired him.

In 2017, he became the 101st person to complete Ramsay’s Round – a 60-mile circuit of twenty-four mountains, climbing the equivalent height of Mount Everest and culminating on Ben Nevis, Britain’s highest peak – in its 39-year history. He has also completed the Bob Graham Round and raced extensively on hills, roads, cross-country and trails in a 20-year running career.

Jonny is a journalist-turned-teacher who moved to Scotland with his young family in search of a better quality of life away from London and he has just published a fascinating book that charts the evolution of hill running, not in the Lake District when every second person and his dog is either a fell runner or is related to one, but here in Scotland where the fell-runner is a somewhat rarer breed.

And what’s more he champions, a very important cause – Scotland’s equivalent of the legendary Bob Graham Round, the Ramsay Round.

Bob Graham was a Keswick guest-house owner who, in June 1932, traversed 42 fells within a 24-hour period. Today, Wales has its Paddy Buckley Round and Scotland has the Ramsay Round, which I think most aficionados would agree is somewhat more severe than the Cumbrian round.

On 9th July 1978 Charlie Ramsay from Penicuik ran round a circuit of 58 miles, taking in 24 summits with a total ascent of over 28,500 feet – almost as high as Everest. His route started and finished on Ben Nevis and took him over the Aonachs, the Grey Corries and the Mamores.

Twenty-three Munros in 23 hours and 58 minutes. Sixteen years later, Alec Keith completed the round with ten minutes to spare. And as is typical of fell runners there was no triumphalism, no laps of honour in front of an adoring fan base. Alec simply got in his car and began the long drive home to Edinburgh.

“By the time I got to Tyndrum, I thought I must have something to eat. I opened the door and fell out sideways. My legs had seized up. I crawled to the Little Chef to put some food into myself.”

These fell runners are a breed apart.

Jonny Muir’s new book was a bit of an eye opener to me, padding out the little knowledge I had about great hill athletes like Finlay Wild, Colin Donnelly, Charlie Ramsay, Helen Diamantides, Angela Mudge and many, many others.

It was particularly fascinating to read about Finlay Wild’s attempt on the Cuillin Ridge when he broke the existing record but was overwhelmed by a nagging doubt – had he actually touched the cairn on Sgurr Mhic Choinnich? He had certainly ran very close to the cairn but did he touch it? On the Cuillin ridge

If he hadn’t, by strict definition, he had not summited and therefore had not broken the record. So the following weekend he ran the Cuillin again, and this time made sure he touched every summit cairn in a new record time of 3 hours 14 minutes 58 seconds. Later in the year he returned and ran it even faster. This time he became the first person to run the ridge in under three hours – 2 hours 59 minutes and 22 seconds. Phenomenal.

Scottish hill-running is full of such stories – the legends of the future – and I’m delighted and thrilled that Jonny Muir has documented so many of them. The Cumbrian Fells may well be the spiritual home of fell-running but the burgeoning Scottish hill-running scene matches it in every possible way.

The Mountains are Calling not only chronicles the legends and tales of this Cinderella sport of the mountains, but is a passionate appreciation of those wild places that now and then become the arenas for these remarkable athletes. Arenas without a cheering crowd and athletes who compete for the sheer and utter joy of it.

The Mountains are Calling, by Jonny Muir is published by Sandstone Press at £19.99