‘The oldest living thing in Europe’

I’ve travelled a fair bit around the world and the one thing I keep encountering again and again, no matter what country I’m in, is the superlative settlement. That is to say, those tiny towns or villages with superlative claims to fame.

The tiniest church, the longest slide, the highest chimney, the angriest lama. Often they’re dreamed up or made in a deliberate attempt to get people to stop in a town, but some lucky wee places are blessed with the genuine article.

Fortingall in Perthshire is one such place but frankly you’d never know it if you were just passing through. Aside from a rustic sign saying ‘ancient yew’ there’s little to suggest that one of Europe’s true natural wonders is here. 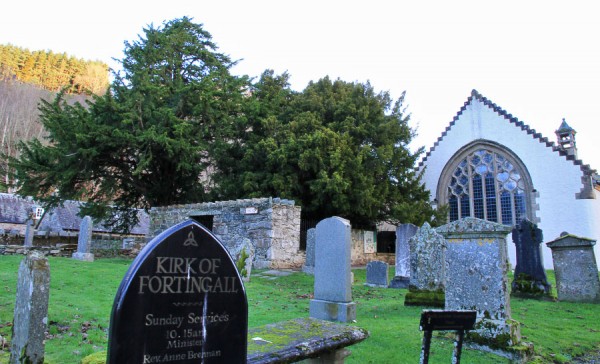 The Kirk and yew at Fortingall, Perthshire

Yews are long-lived trees anyway, living up to between 400 and 600 years. However, under the right conditions they can live a staggeringly long time. Depending on what you read or who you speak to, the Fortingall Yew is anywhere between 3000 and 9000 years old. Most sources tend to plump for 5000 years, though, which gives Fortingall a pretty good claim to having the oldest living thing in Europe……a claim commonly made about this tree.

Which came first? The church or the yew?

Like many of the ancient yews across Great Britain, the Fortingall yew is located in a churchyard. While it’s easy to assume that all yews were planted in the grounds of churches (and in many cases they were) many ancient yews pre-date the churches that stand next to them. Or in the case of Fortingall, pre-date Christianity itself. This familiar pairing of church and yew is not a coincidence, though.

As an evergreen conifer the yew doesn’t lose its needles in autumn. It also has regenerative qualities where it is able to ‘layer’, ie when its long branches touch the ground they can take root and grow as a new tree. If apparently dead branches break off and fall to the ground, the same thing can happen.

Add to that the fact that yews are highly poisonous as well as unusually long-lived, and it’s little wonder they have been venerated as symbols of life, death, rebirth or immortality since pre-Christian times.

When Christianity arrived in Britain, early Christian leaders are believed to have built the earliest churches on or near the sites of pagan ritual to appease the recently converted populace. Yew trees would have been among such sites.

In spite of these pagan origins, yew trees maintained their spiritual significance under Christianity. The branches of yews were on Palm Sunday, and the trees continued to be planted in and around churchyards.

Traditions endure, and the widespread reverence for the yew tree is no exception. It was in that tradition of reverence that I found myself making my own personal pilgrimage, as a nature enthusiast, to the Fortingall Yew last week.

Parking outside the kirk in Fortingall, I did wonder if I was in the right place. There was no massive car park, no attendant, no turnstiles or gift shop. In fact there were no people in sight anywhere. There was just a small yard with a sign asking motorists to give priority to churchgoers on Sunday mornings. It was wonderfully understated.

A sign pointed the way to the yew tree path, a recently paved addition that takes you on a journey through 5000 years of Scottish history. 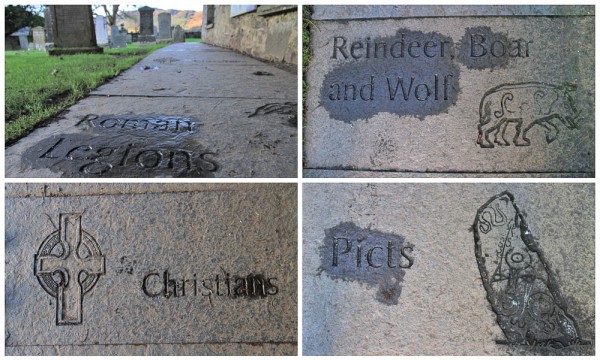 Walking in the footsteps of history

Romans, Christians, Picts, Celts, they all pass in chronological order beneath your feet. There’s a good natural history element too, with reindeer, boar and wolves getting a special mention.

The deceptively brief journey ends with ‘YOU’, the latest individual to have walked here. It does genuinely feel like you are walking in the footsteps of creatures and people of bygone ages. A simple but extremely effective way of making you feel part of the long history of this place.

By this point you are standing next to the tree, but what might come as a surprise to many is that you can’t actually get up close to it. It’s contained within a tall, thick stone wall, with railings to let you peer inside.

I wasn’t sure what I was expecting to find inside, to be honest. Just what does a 5000 year old tree look like? From outside the wall the yew looked much like any other yew I’d seen. Lush green foliage rising up on thick sturdy branches, carrying over the tops of the walls and out into the graveyard.

What greeted me as I peered through the railings wasn’t some enormous sprawling tree trunk. Instead it looked like two or three small, mangled trunks with bare ground between them. If you saw these trunks anywhere else, without a wall or interpretative panels next to them, you could be forgiven for thinking they were completely separate trees.

Ancient yews tend to rot from the inside as they get older and bigger in girth (circumference). Yews are extremely resilient to this potentially debilitating process and can flourish despite their hearts rotting away and their massive trunks becoming hollow. As time wears on and the massive tree continues to grow and flex under its weight, it can tear itself apart.

But this is only half the story. Either because of spiritual, religious or local significance, the Fortingall Yew has suffered greatly at the hands of those who revered it.

The yew and its wood and branches were supposedly used in all manner of rituals over the millennia. We can’t guess at half of what went on, but in more recent times Beltane fires were lit in its heart, funeral processions passed through the gap in its trunk, wood was taken for making quaichs and other items of significance, and fragments were removed as souvenirs.

It’s all taken its toll, perfectly illustrated by small posts in the ground that mark its former girth. We know it was formerly much larger because of a wealth of written evidence over the past 300 years.

‘In Fortingal church-yard are the remains of a prodigious yew-tree, whofe ruins meafured fifty-fix feet and a half in circumference. ‘

The fragmented yew, seen from either end of the enclosure. The posts mark out its original enormous girth.

By the time of Pennant’s visit the yew was already ancient and had split in two, hence using the word ‘remains’, but it was still massive in girth. Sketches from the time show a much larger organism than we see today, simply looking like a huge tree with a split down the middle of its trunk.

A few years later in 1785 there are anecdotal accounts of people being able to squeeze through the gap between the two fragments. There was clearly concern in that same year at the tree’s accelerated decline because, in an early act of nature conservation, a wall was built to try and protect it.

This doesn’t appear to have halted its decline because, by 1825, the yew’s heart had been reduced to ground level. A new wall was therefore built in 1842 and this is the one you can see now.

You can also see where some low lying branches have been propped up on stone pillars to try and reinforce the remaining fragments. And yet, the remaining fragments appear to be in good health. Branches are reaching well into the churchyard and there are plenty of fresh twigs and needles emerging all over the place.

Standing there it was irresistible to wonder what sights this tree had been silent witness to over the millennia. There’s the local legend of Pontius Pilate of course who, it is claimed, was born in these parts. Had he played under this tree? Plenty of folk pour scorn on the idea, but the myth endures regardless.

Personally I found myself pondering how Scotland has only been free of ice for around 10,000 years. That meant this tree had perhaps stood for half of Scotland’s post-glacial history. I stood there pondering for ten minutes or so, quite in awe of this amazing place.

Is it really the oldest living thing in Europe?

Trees are an easy concept for us to grasp because we are so familiar with them. We know that they grow from seeds, that they grow big and then they die. The time between them taking seed in the ground and dying where they stand (or fall) gives you their age in years. Simple. But there are living ‘things’ that defy such simple classification.

There are root systems underground from which any number of genetically identical tree clones can sprout. Those individual trees might be only a few hundred years old when they die, but their vast root systems live on and push new tree stems up over the millennia. Using this means of identification, the oldest living thing in Europe is Old Tjikko, a skeletal looking Norway Spruce in Sweden. The tree itself is only around 15ft high and not very old, but the root system from which it sprouted is around 9550 years old.

In a similar fashion, recent studies off the Balearic Islands have found huge meadows of cloned sea grasses that are perhaps 100,000 years old. And then elsewhere in the world there are long-lived bacteria in the permafrost, truly ancient sponges and corals and all manner of weird and wonderful things that are almost immortal.

So it depends on your definition. If it’s limited to free-standing trees then the Fortingall Yew certainly has a valid claim to the European title. It is certainly regarded as the oldest in Scotland and, perhaps, the oldest in Britain. In this day and age it might seem strange that we can’t tell how old a tree is, but ancient yews don’t make it easy. They’re hollow, so often there are no rings to count. Yews also grow erratically, having dormant periods that skew their rings and make it difficult to discern where the centre of ring growth is.

They also can’t be reliably carbon dated because, as old bits decay and new bits grow, you won’t necessarily be able to find the oldest part of the tree. Estimates of their ages have to be drawn from a combination of techniques and sources, and written or anecdotal accounts are just as useful as science in this regard.

For complex reasons too lengthy to describe here, the Ancient Yew Group seems to come down on the side of Fortingall being the oldest of the two. However, because science can currently offer no definitive answer either way, the claims and counter-claims are sure to continue for many years to come.

In my view, while accolades and superlatives are undeniably attractive (especially to the tourist industry), it’s important not to attach too much value to them. Regardless of where it features in European or global rankings, there’s no disputing that the Fortingall Yew is very old indeed, and remaining ignorant of its exact age does nothing to diminish the stature and mystique of this incredible old tree.