The wonder of natural beauty

ONE day a bear walked into a bar, sat down, and ordered a beer. The barman was amazed, and in a state of shock proceeded to pour the bear a drink. “How much?” said the bear. By this time the barman was getting over his shock and realising the bear, although obviously smart, has no idea of the price of beer, decided to overcharge him. “Twelve dollars sir”, said the barman. The bear paid him and slowly drank his beer.

After a while the barman’s curiousity got the better of him, so he tried to engage the bear in conversation. “We don’t get many bears in this bar,” he said. “The bear looked up from the bar and replied,”Well at twelve bucks a beer, I’m not surprised.”

OK, it’s maybe a little far fetched, but bears are undeniably smart beasts. These fabulous creatures have been on my mind recently for I’m off to Lake Tahoe and Yosemite in California in a couple of weeks time, both regular haunts of the Californian Brown Bear.

These big beasts are common throughout the Californian mountains, but shouldn’t be confused with grizzly bears. How do you tell them apart? Easy, climb a tree! If the bear climbs it and eats you, it’s a brown bear. If the bear knocks the tree down and then eats you, it’s a grizzly.

Many backpackers like to wear little bells on their packs The idea is that bears only become aggravated if you surprise them, so you should try and warn them of you approach. This doesn’t always work with grizzlies. You can tell that by comparing brown bear scat with grizzly bear scat. The grizzly scat often has bells in it.

The truth is that brown bears are much smaller than grizzlies and generally speaking will be more scared of you than you are of them, although it’s sometimes hard to convince yourself of that. On our first night on the 220-mile John Muir Trail a number of years ago we hadn’t really organised our camp. All our food was in bear barrels, plastic tubs that bears can’t open, but my son Gregor had mistakenly left his washkit hanging on a bush in front of my tent. About two in the morning I was awakened by a noise, and looked out the open door of the tent to see a huge black silhouette with pointed ears reaching up to take the washkit. I roared as loud as I could, grabbed my cooking pot and lid and clashed them together to make as much din as possible. The bear immediately fled. I should have felt triumphant, but I didn’t. I could feel my heart pounding for what seemed like hours and I started at every little sound. I was a nervous wreck, even though I knew that the bear, all 300 pounds of it, was even more terrified of me.

Next night we were better organised. We cleared up the camp site, packed everything in our bear barrels and left nothing lying about for marauding bears. As I lay in my tent in the last minutes of daylight I spotted a movement out the corner of my eye. A huge chocolate brown bear padded slowly into our camp, stopped and eyed us up, sniffed the air then slowly sauntered off into the woods again. In those few precious moments, as the bear and I looked directly at each other, I connected with the natural world as never before. It was one of the highlights of the trip, and it was important, a vital part of feeling at one with the wild world we were travelling through.

I’ve experienced this connection with the natural world here in Scotland too. Many years ago I came across a young hind browsing at the edge of the forest. I wrote about it in an early book, ‘Backpackers Scotland’. “I stopped and slowly reached for my camera that was hanging from my pack. Just as I managed to focus on her she suddenly looked up at me, warned by some ancient animal instinct, and in that brief moment her dark liquid eyes met mine through the lens of the camera I was so totally and utterly bewitched by her guileless innocence that I could not press the shutter release.

“Her nose was black and twitching slightly and around it the short wax-smooth pelage was white, contrasting richly with the dark redness of the rest of her. As quickly as she looked up at me she was gone, vanished in a blur of total precision and perfect deportment so fast that I barely had time to take the picture, but I was left with a much more important experience than a mere snapshot – an overwhelming wonder of the immensity of the moment as I gazed eye to eye into the beautiful world of nature.” Watching the seas at Rubha Hunish

More recently I was with a film crew in the north of the Rubha Hunish peninsula on Skye when someone spotted a Minke whale not far offshore. We sat and watched it for about an hour, thrilled by the movement of the arched shape and fin as it sliced through the gruelling, gurgling waters of the Minch. Here we were, a hard-bitten, seen-it-all television crew, five grown men all experienced in the ways and sights of the outdoors, as thrilled as children, as excited as puppies. 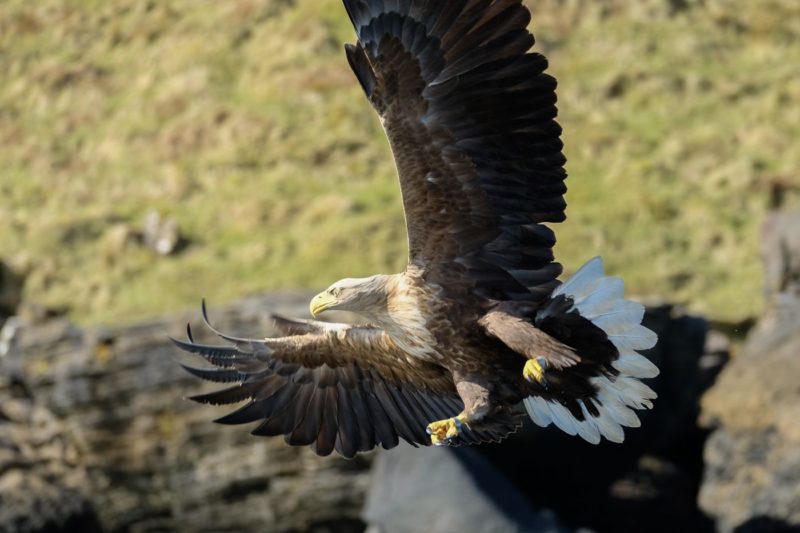 White tailed sea eagle on the Isle of Skye

I later pondered this curious reaction to seeing nature in the raw. It seems we are so removed nowadays from the sights and sounds of nature that any close encounter with wildlife really excites us.

In watching a whale arching into its dive, or wondering at the majestic flight of an eagle it would appear that we become aware of the simple magic of the moment, an instinctive recognition of the existence of order and harmony and that can be both exciting and curiously comforting. Over the years I’ve been blessed with several face-to-face encounters with wild animals – bears, wolves, coyotes and here at home smaller but no less exciting species like otters and badgers. All of them have given me a sense of beauty and magic, sensations that never fail to fill me with hope and optimism, feelings that can be very rare in a sometimes dreary world.