FILM-maker Richard Else and I have worked together for the best part of a quarter of a century.

In that time he has endured the idiosyncratic nature of this curmudgeonly outdoor writer with patience and good humour, and has persevered with fortitude on those occasions when some of my own hare-brained schemes were clearly impractical.

But Richard endured a tough apprenticeship before he began working with me – he was the television producer who coaxed the reclusive and cantankerous Lake District guidebook writer Alfred Wainwright onto our television screens and worked closely with him for several years. At one point they even went on holiday together.

In a new book to be published next month Richard fondly recalls the years they worked together and the incredibly complex characteristics of a man who was to become a very reluctant television celebrity.

At the very beginning of their working relationship many said Richard had surely set himself an impossible task.

Wainwright was a man who hid behind mountain cairns so he didn’t have to talk to people. Someone who didn’t suffer fools gladly, an Andy Capp-type Lancastrian who had little concept of social graces; a husband who had treated his wife in an abominable way because he thought she was of a lower class than himself. 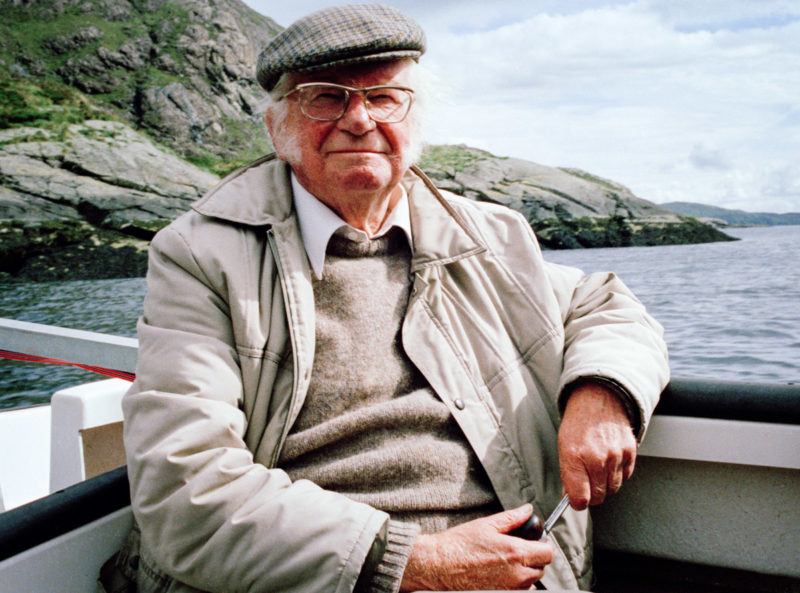 Wainwright visiting the Isle of Skye

Like many Scots hillgoers, I wasn’t really aware of Wainwright’s Lakeland reputation and literary contributions until he appeared on telly. I had long admired the precision of his Pictorial Guides but would never have used them – to me they were just too detailed and over-complicated.

What we saw on our television screens was an elderly, overweight, shortsighted Lancastrian who didn’t exhibit many of the traits that had shaped his ‘curmudgeonly’ status.

Instead we were treated to a series of gentle reminiscences from Wainwright, urged on by a dapper and knowledgeable young television presenter called Eric Robson who appeared to have the patience and virtue of a saint.

Millions of words have been written about Alfred Wainwright over the years and indeed since his death there has been a mini-industry built around his name.

It’s over a quarter of a century since his death but his amazingly intricate and detailed guidebooks still sell well, you can buy Wainwright boots and beer and there is even a very active Wainwright Society, but what of the main himself? What was he really like? His story is worthy of a televised drama-documentary.

Few people knew of Alfred Wainwright as well as Richard Else. They met in 1982 and travelled about 5000 miles together over the years that followed. After an initial ‘one-off’ programme Richard made three television series’ with Wainwright and worked with him until AW’s death in 1991. Indeed, they were filming when Wainwright took ill and had to return home. In his new book, Wainwright Revealed, Richard Else describes the slow and systematic procedure that led to a mutual trust, not an easy process with someone as complex as Wainwright. He describes many moments when Wainwright appeared to go against his public persona and completely surprise him and he recounts the more unusual personal traits of his subject that led him to believe ‘there were other, deep seated and powerful factors at work.’

Wainwright had a distinct need for order in his life. He wanted to be in control. He badly needed a secure framework in his life and he was obsessive.

‘I discovered a compulsive rigidity in all aspects of AW’s life,’ Richard wrote. “It extended from the way he planned his books, to visiting the same cafe and eating the same food every Saturday night when Keswick was his base for exploration. He told me about reading every western book that was held in Kendal library – not detective fiction, or adventure or historical narratives, just westerns.’

That obsessive nature, and the need for an all-enveloping order, can be witnessed in his Pictorial Guides. Richard has studied those guides carefully and noted that systemic order:

‘Today we take its (the Guides) structure for granted, but step back a little and it is possible to view it differently. Anyone other than Wainwright tackling such a project would take a different approach. Another author would select perhaps 25 or 50 summits and would probably choose the obvious line of ascent, with perhaps a subsidiary one mentioned.

‘AW was different; he developed an overall template for both the whole work and for each individual fell. No mountain is so important, for example, that it would merit a double-page illustration at the start of the chapter.’ Richard reveals the genesis of the very first Pictorial Guide. While working on the first volume, The Eastern Fells, he had devised a template for the whole work. He wanted the guide to be reproduced exactly as he had worked on it – handwritten and with absolutely no changes to the layout.

Wainwright Revealed is jam-packed full of anecdotes and is (surprisingly given the subject) rich in humour. And the conclusions of the book may raise some eyebrows.

Here was a man who had more compassion for animals than people, a man who cared more for the production of his guidebooks than for his marriage, someone who worked out a set scenario in his own mind and couldn’t even contemplate any changes to that and a man who has little interest in anyone else or anything that was not on his own tightly controlled radar.

‘I am a detached observer’, he wrote at the end of Ex-Fellwanderer, ‘keeping everybody and everything at an arm’s length. I am unperturbed by wars and famines and have no time at all for party politics’.

Richard Else’s hypotheses on Wainwright’s demons has been underlined by modern psychology but what is far more evident in this book is the genuine fondness that grew out of this relationship between a television producer and a reluctant star, a fondness based on mutual respect and understanding, an affection that may well touch others and encourage them to revise, even slightly, the reputation that Alfred Wainwright creation for himself as being curmudgeonly and unco-operative.

Wainwright Revealed, by Richard Else, is published by Mountain Media. The publication date is November 9th, 65 years to the day when AW began writing his first guidebook, but the book is available to pre-order.