What Price a Bothy?

IT was a number of years ago now when my two sons had joined the Boy Scouts. I was asked to help organise an overnight expedition for the lads and since it was February I agreed to take them to Glen Feshie for an overnight in the popular bothy known as Ruigh-aiteachain.

We kitted the boys out with headtorches and wandered down the snow covered footpath from Achlean. As soon as they picked out the grey walls of the bothy through the trees they made a run for it, all eager to find the best space to put down their sleeping bags.

As I entered the bothy behind them my heart sank. There was a roaring fire in the grate, several candles cast flickering shadows across the room and in front of the fire, obviously newly in love and anticipating a romantic, candlelit evening, sat a young man and woman.

Their quiet evening now spoiled by a dozen, loud, excited youngsters, I sincerely apologised and vowed to myself that I would never, ever, take a group of people to a bothy again.

This woeful scenario came to mind as I was given a tour of the newly renovated Ruigh-aiteachain bothy by the estate’s Conservation Manager Thomas MacDonell.

I had picked up a story from one of the keepers that the owner of Feshie Estate, Anders Holch Povlsen, had visited the bothy and finding it a little bit damp and smelly vowed that he would never spend a night there, and did not expect any visitor to his estate to spend an overnight in such a place either. He decided to spend some money “doing it up.” 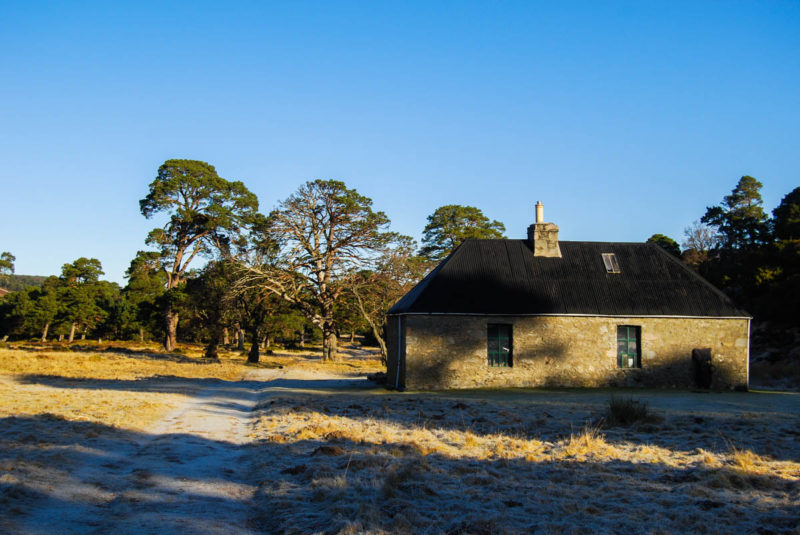 Thomas smiled when I related this story to him and suggested it was partly true. It would appear that health and safety issues had a more direct effect on the decision to refurbish the bothy than sheer altruism.

Now refurbishing a bothy is one thing but it appears Anders Holch Povlsen has spent in the region of £200,000 in bring the bothy up to its new exacting standards. There’s a replacement roof, and a new extension which houses a log store and a staircase to the upstairs sleeping area. The two downstairs rooms now have wood burning stoves in each of them and the walls have been clad in a rich redwood pine.

This old cottage, which has offered shelter to thousands over the years, is now Scotland’s first five-star super-bothy.

Thomas was eager for my advice. While the estate has traditionally supplied wood for use in the bothy, he was concerned that if the supply ran out people might take wood from the surrounding pine woods, not necessarily live wood but dead wood, and since dead wood probably contains more life than a live tree he had decided to supply the bothy with a store of ‘compressed’ logs, similar to those used in many urban wood-burning stoves.

Did I think it would be suitable to have a sensitively worded notice in the bothy asking for voluntary contributions towards the cost of the logs?

Now, although I’m not a bothy user myself, I am aware that there is a current trend in Scotland for groups of people to drive as close to a bothy as possible and lug in enough booze, and often drugs, to make T in the Park look like a temperance party. Glen Feshie above the bothy

Maybe I don’t have as much faith in mankind as I should have but I couldn’t help thinking that this bothy could now become a target for the druggies and party-goers with all the potential for serious damage to the new fabric of the building.

There was a time when these shelters were little known and the Mountain Bothies Association, for example, was very reluctant to provide lists of bothies, but that has now dramatically changed with the recent publication of a glossy, beautifully published book called The Bothy Bible.

Bothies are now temptingly listed, photographed and described as though they were a chain of Premier Inns.

I felt distinctly uncomfortable about hillwalkers paying a fee to use a bothy, even a super luxury bothy as Ruigh-aiteachain now is.

I couldn’t help think that less charitable landowners might follow suit, and charging for use would change a bothy into a hostel, creating planning conditions and even more health and safety issues. While I was hugely impressed by the work carried out on this bothy I couldn’t help feel that perhaps it wasn’t money well spent and perhaps, just perhaps, the estate has created a noose for itself, but having said that, I’m not a bothy user. That’s why I promised Thomas I would write something about it on WalkHighlands and ask readers to comment on the Forum.

Is this refurbishment of Ruigh-aiteachain money well spent?

Should the estate supply compressed logs and ask for voluntary donations to meet the cost?

If the bothy fabric was trashed in any way would it be acceptable for the estate to make a charge for using the building?

I should say that Ruigh-aiteachain bothy has an excellent and committed maintenance representative from the Mountain Bothies Association and I’m sure the MBA will also want to comment, so I’ll be intrigued to see how this issue fans out.

Will common decency and the spirit of the hills win the day, or will society’s dregs spoil it for everyone else as they have done on Loch Lomond’s shores. I kinda suspect, and hope, it will be the former.

It’s thought the new refurbished bothy will be open later this summer. Check with the MBA at www.mountainbothies.org.uk.

Photos of the renovation works at the bothy can be seen at various stages on this thread on the Walkhighlands forum, posted by gaffr

A discussion of Cameron’s article has begun on the forum on this thread.