The sun shone as the ferry pulled away from Uig pier. A health and safety announcement crackled over the tannoy system in English and Gaelic. Car alarms sounded from the vehicle deck as the vessel gently rocked to the starboard side, sweeping out of the bay. The rugged profile of the Trotternish ridge was revealed and, in the distance, the magnificent peaks of the Cuillin came into view. I meandered around the passenger deck with my parents, watching Skye gradually recede into the distance and catching glimpses of puffins skimming above the water surface. We made our way indoors and climbed a steep flight of stairs into the observation lounge. A live band played jigs, strathspeys and reels and we clapped our hands and tapped our feet appreciatively. On the other side of the reinforced glass, a saltire flapped wildly at the bow of the vessel and the Western Isles grew larger on the horizon as we approached. 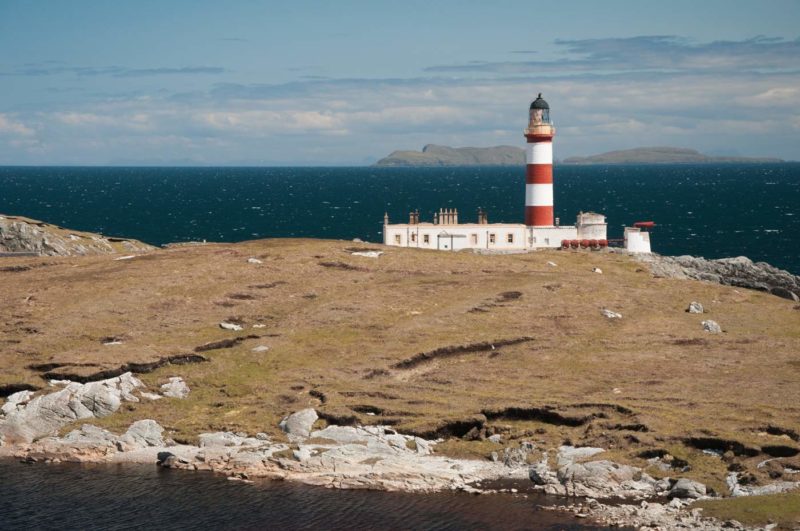 We sailed past the red and white striped tower of Eilean Glas, one of the oldest lighthouses in Scotland, and caught sight of the recently constructed Scalpay Bridge; places we would explore during the coming fortnight. After two hours at sea, the ferry slowed on its approach into Tarbert. Individual buildings became distinguishable, set against a rugged landscape almost completely devoid of soil and vegetation; unlike anything I’d seen in all my years of touring the Scottish mainland. The year was 2002 and never in my life, before or since, have I felt so excited en route to a holiday destination. Something must have told me that I would fall in love with the Isle of Harris. 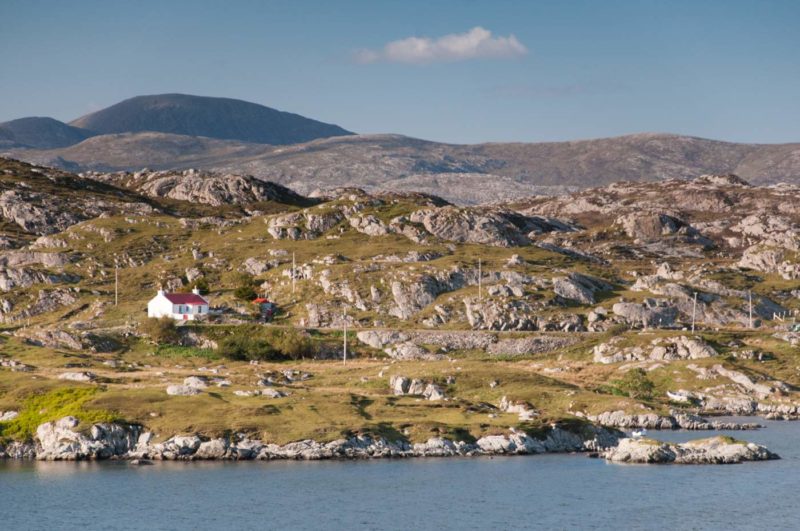 Harris is a place of contrasts. The raw, unforgiving landscape I observed from the ferry is representative of the island’s east coast. NASA’s lunar rover wouldn’t look out of place in this environment which is best encapsulated by the word ‘moonscape’. The harsh, bleak surroundings are interspersed with outcrops of peat growing by the side of the ‘Golden Road’; miles and miles of single track which twists and turns over the landscape like a silk ribbon dropped on to broken glass; its name seemingly a reflection of the enormous cost of its construction in the late nineteenth century. The route connects a series of tiny hamlets in an area known as ‘the Bays’. These settlements were established when the crofting tenants of the island’s fertile west coast were evicted from the lands of their ancestors to make way for sheep farming during the Highland Clearances. The islanders that remained on Harris, as opposed to emigrating overseas, eked out a living from soil in the Bays that was too shallow to accommodate their remains when they died. Funeral precessions followed the ‘Coffin Road’ from Leac a’ Li to Seilebost and Luskentyre, where the deceased were laid to rest in the deep sandy soil of the west coast, in the cultural landscapes of their forbearers. 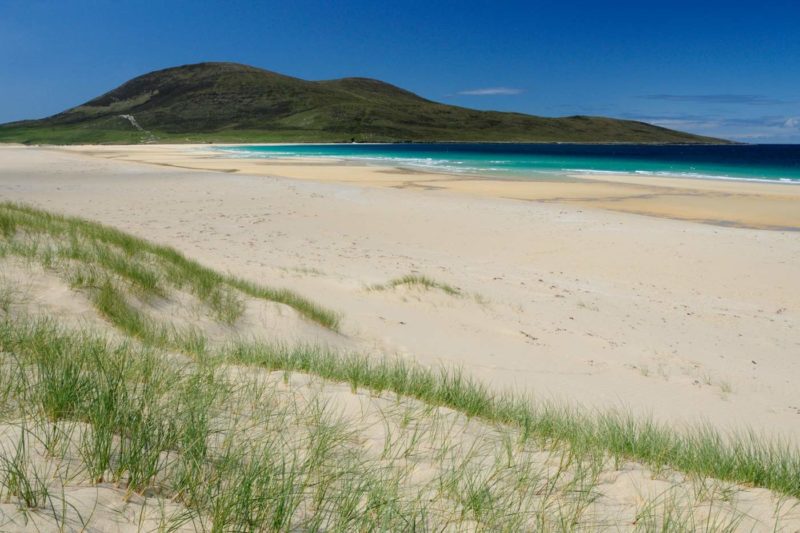 Perhaps I’m biased but the west coast of the Isle of Harris is surely one of the most beautiful places on Earth. Vast expanses of pristine golden sand, largely deserted save for the occasional dog walker or tripod-wielding photographer like myself, look on to shallow turquoise waters and smaller islands, such as Taransay and Scarp, waiting to be explored. High points on the long and winding road to Huishinish offer views to the remote archipelago of St Kilda in clear conditions. The huge sand dunes at Luskentyre are dwarfed by the enigmatic mountains beyond, and the island’s unspoiled beaches are separated from small townships, such as Taobh Tuath and Scarista, by large tracts of machair; sandy grazing pasture which blooms with wild flowers during the summer months. It is little wonder that these landscapes have been mistaken for far-flung tropical locations, although it must be said that photographs disguise the somewhat cooler air and sea temperatures of the Outer Hebrides! 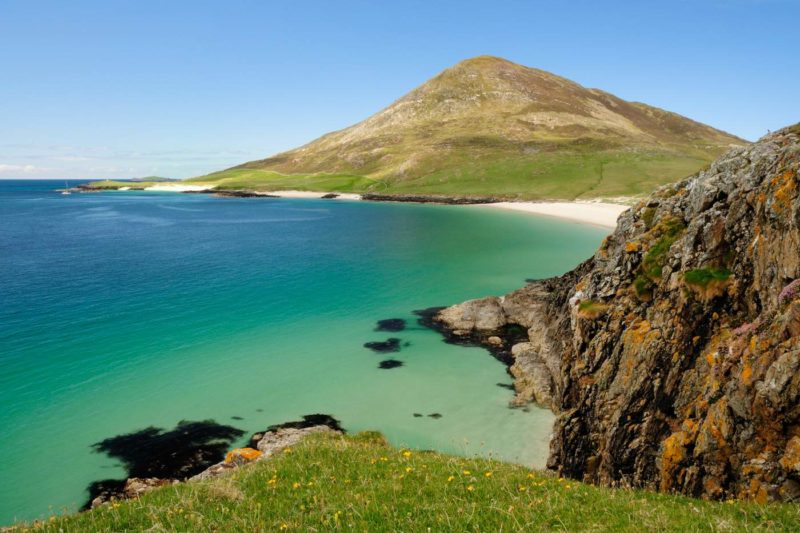 Fifteen years on from that idyllic, life-affirming initial visit to Harris, I found myself on the passenger deck of the M.V. Hebrides in very different circumstances. The ferry set sail from Uig under a blanket of rain clouds; the weather a perfect match for my emotions. On the vehicle deck below, my car was crammed with walking, cycling and photography gear; in addition to wedding cake, a kilt and a white dress. Travelling to Harris to tie the knot on a secluded corner of the beach at Luskentyre was, on the face of it, sheer perfection. However, like the juxtaposition of the landscapes of this island, life has a habit of weaving together darkness and light, sometimes in the most unexpected ways. Two weeks before the wedding, I received the life-changing news that my dad had cancer. Fighting back tears on the ferry, I was struck by the overwhelming contrast of the present scene with the untroubled landscapes of my teenage mind all those years ago. 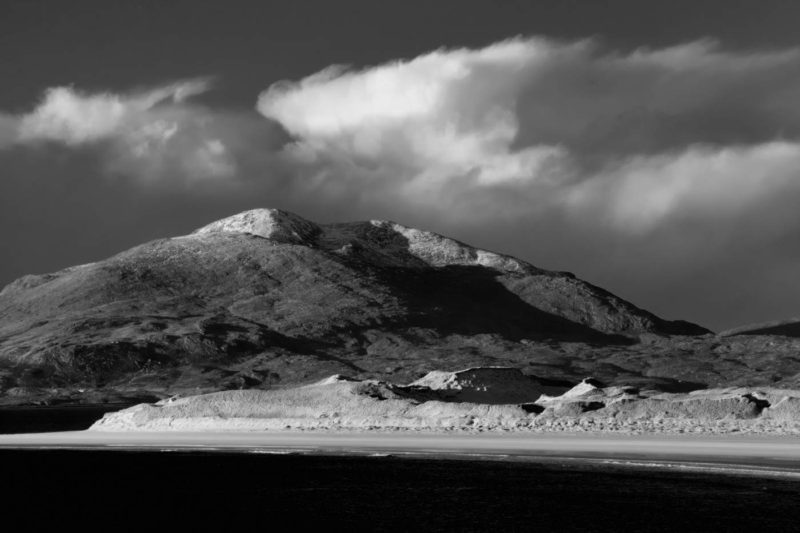 All was not lost. The breath-taking beauty of Harris can brighten even the blackest mood. The wedding went ahead and largely to plan – a beacon of light in a time of great darkness – and Harris provided the ideal setting for such an occasion. Vows were exchanged; jigs, strathspeys and reels echoed from my laptop speakers; and champagne corks were popped in amongst the usual Hebridean mixture of rain, sunshine and ferocious westerly winds; all topped off by the appearance of two semi-wild ponies grazing in the sand dunes and, most importantly, my parents by my side. 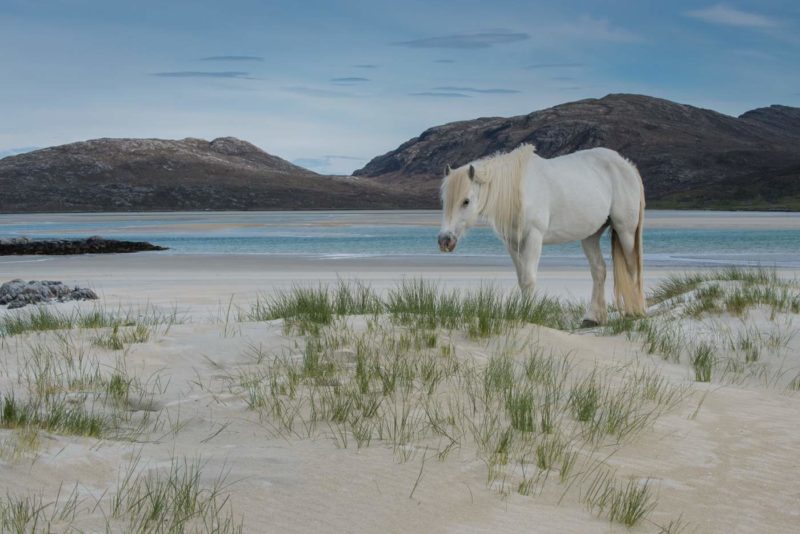 A friend of mine recently remarked to me how tiresome she finds the current time of year. Admittedly, the nights are still long and cold, and the snow still clings to the Scottish hills and mountains. Nevertheless, the darkest days of winter are behind us and, with the promise of the coming spring, there is renewed hope and belief that the sun will shine again, and daffodils will bloom in our garden. A cancer diagnosis changes everything, from the turmoil of the present day, to the way we reflect on the past, and the mindset with which we face the future. The endless march of time pushes treasured memories and bygone ways of life further into the past; yet it also offers new opportunities, no matter how harsh and bleak the surroundings appear at first sight.

Check the Walkhighlands guide to the Isle of Harris