Although part of the same landmass as Lewis, Harris has a character of its own. The northern part of the island has the most extensive and highest range of mountains in the Outer Hebrides, a complex of ridges, glens and summits which is amongst the wildest in Britain. Apart from the highest summit - the Clisham (or An Cliseam) - the hills are quiet and provide superb outings for the hillwalking connoisseur.

The island narrows to a tiny neck at its main settlement, Tarbert, whilst to the south the character changes yet again. The eastern coast - deeply indented, bare, rocky and elemental - sees a series of tiny villages linked by tortuously twisting tarmac, whilst to the west is a strip of fertile machair, bedecked by flowers in early summer, as a foreground to one of the finest series of beaches in all the Hebrides. 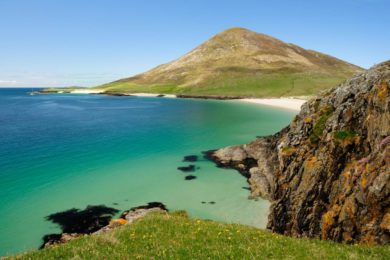 Karen Thorburn writes of two very different visits to the Isle of Harris.

"The sun shone as the ferry pulled away from Uig pier. A health and safety announcement crackled over the tannoy system in English and Gaelic. Car alarms sounded from the vehicle deck as the vessel gently rocked to the starboard side, sweeping out of the bay." 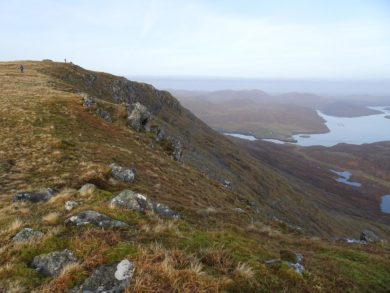 FEATURE: A Circuitry of Ways Old and New

Writer Linda Cracknell experiences a winter walking break at Rhenigidale on the Isle of Harris.

"My ‘Landranger 13’ map of 'West Lewis and North Harris' shows no road reaching down the peninsula west of Loch Seaforth’s mouth. This is because I bought it for a trip to the ‘islands’ of Lewis and Harris in 1985 before a road had been built. I Lived in Devon at that time..." 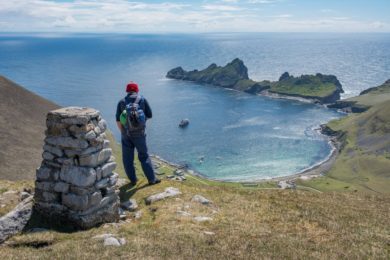 "Half my lifetime ago, in 2002, I found myself on holiday with my parents, standing atop huge sand dunes overlooking a magnificent beach on the west coast of the island of Berneray in the Sound of Harris..."