Corries are ice-gouged bowls carved into the side of mountains by glaciers during the last ice age. Often ringed by crags and sometimes cradling a lochan, corries are often known as cirques in the Alps and Pyrenees, combs in the English Lake District, and cyms in Wales; the Scots version comes from the original Gaelic word coire. There are hundreds of them all over Scotland; here’s our pick of some of the finest, including both some of the most celebrated and also some lesser known surprises.

This magnificent corrie is the great showplace of Creag Meagaidh, and provides one of Scotland’s most celebrated venues for ice climbers. Coire Ardair can be reached by a good path and makes for a fine walk in its own right. 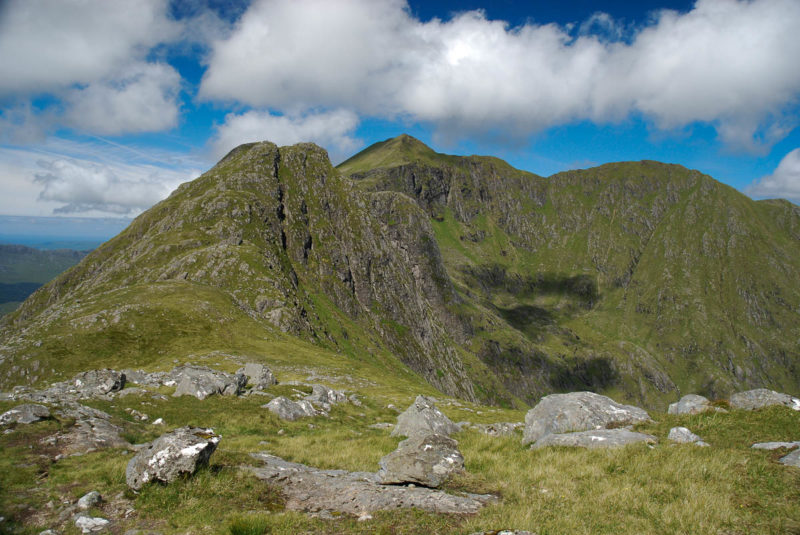 The remote Knoydart peninsula offers some of our most rugged mountain landscapes. This is its best known and perhaps finest corrie, carved into the slopes of Ladhar Bheinn above remote Barrisdale Bay. Coire Dhorccail is owned by the wild land charity the John Muir Trust, and is set to become even more magnificent in the future as the Trust is helping to regenerate and restore the woodland at its foot. 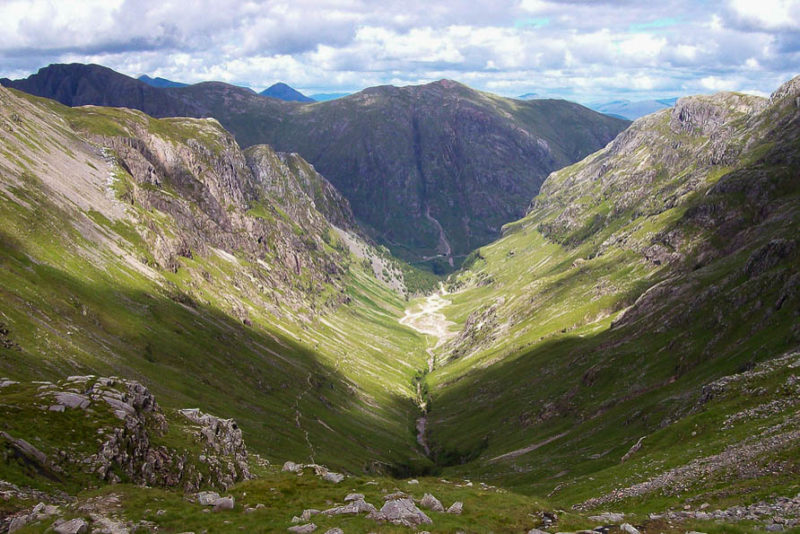 Coire Gabhail is better known to many casual visitors as the Lost Valley, sweeping up towards Bidean nam Bian between Bheinn Fhada and Gearr Aonach, two of the celebrated Three Sisters of Glen Coe. Whilst it lacks the individual grand crags of some of the other corries on this list, Coire Gabhail is a magnificent place to visit for its scale and symmetry, and was once used by the MacDonalds of Glencoe to hide their cattle. 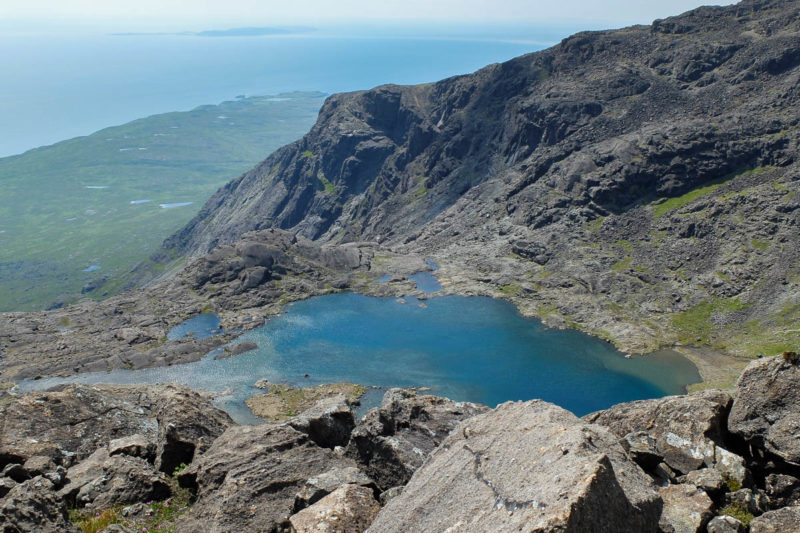 The name Coire Ghrunnda means the rough corrie – and this name and variants of it are repeated in many parts of the Highlands. None of them are rougher than Coire Ghrundda in the Skye Cuillin, its peridotite rock is the roughest of all the famously rough Cuillin gabbro. Scramblers will feel their fingertips worn after a day clambering over the bare rock that makes up the remarkable landscape here. 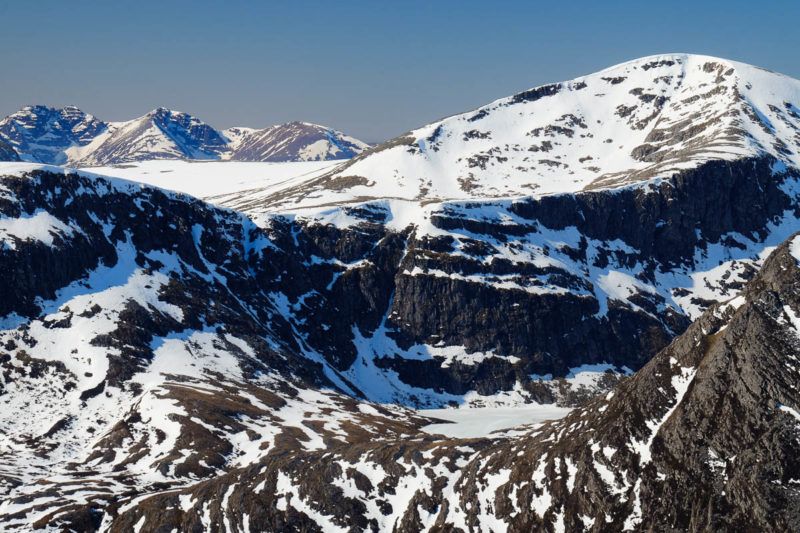 Choire Chranda on the Beinn Dearg range is one of the less celebrated corries on this list, but this magnificently wild bowl cradles the large and beautiful Loch a’ Choire Ghranda beneath the craggy slopes of Beinn Dearg and its neighbour, Cona Mheall. 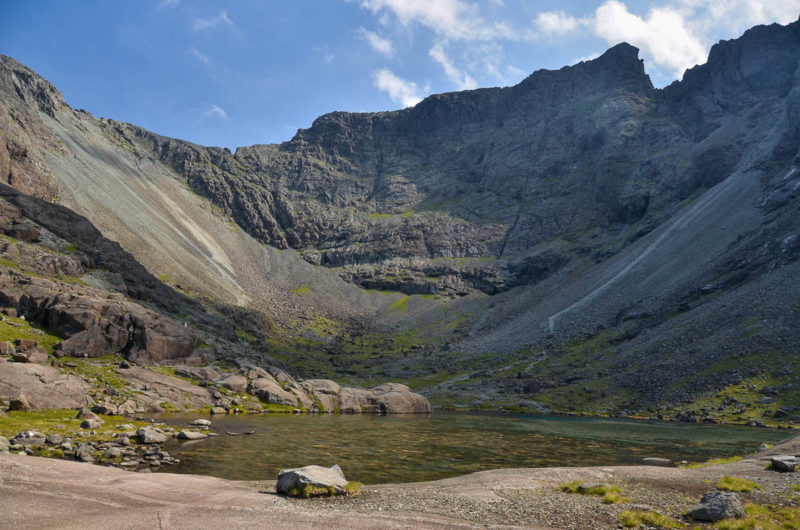 Cradling a tiny, deep blue lochan, the ice-scoured bowl of Coire Lagan is ringed by the highest peaks of the Cuillin of Skye, the most Alpine mountains in Britain. Coire Lagan is a popular walk in its own right and many regard it as the finest of all our mountain corries. 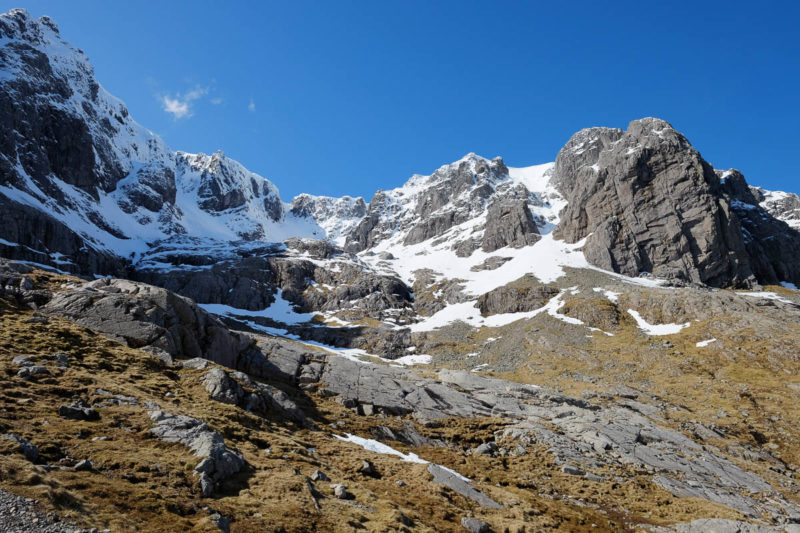 Does the magnificent North Face of Ben Nevis, combined with the headwall of the Carn Mor Dearg arete, qualify as a single corrie? If it does, it may be Scotland’s grandest; if not, then Coire na Ciste – biting into the summit plateau of the mountain, towering directly above the CIC Hut and enclosed by Tower Ridge, certainly does. 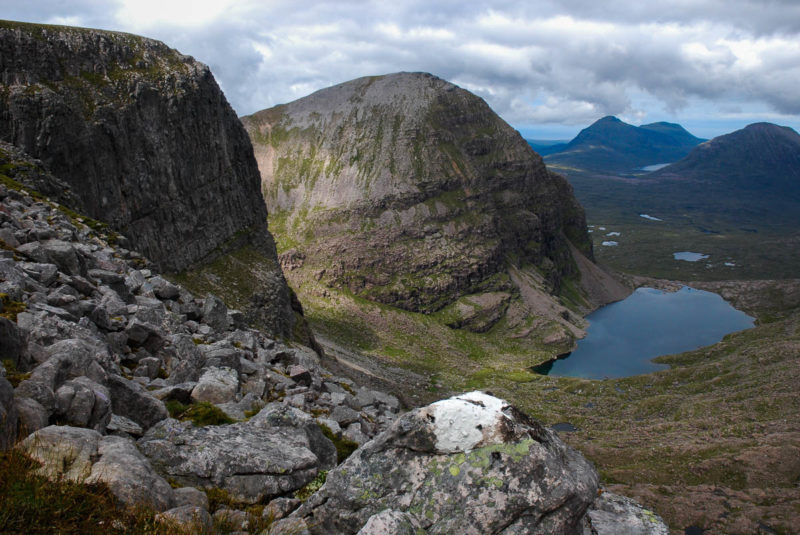 Beinn Eighe has several other majestic corries, and the north side of Liathach‘s Coire na Caime is made grander by its remoteness, but the celebrated Triple Buttress ensures that Coire Mhic Fhearchair is regarded as the great showplace amongst the Torridon mountains. 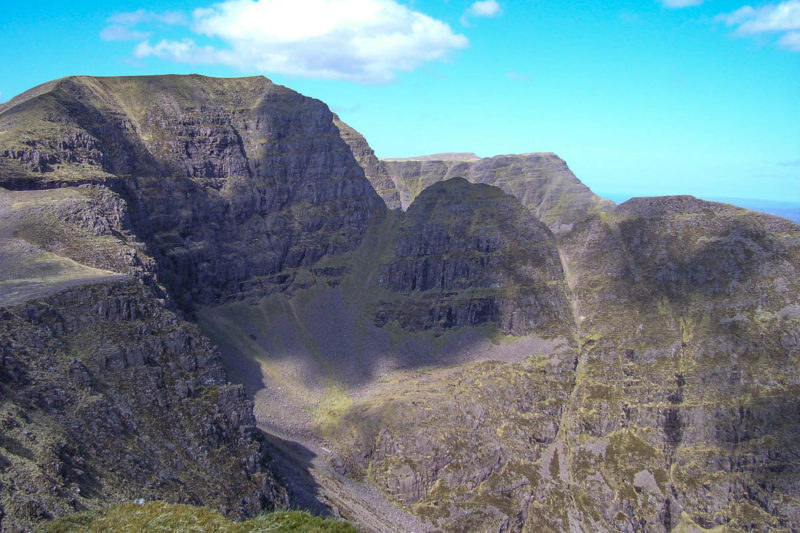 Torridon is justly celebrated for some of Scotland’s most magnificent mountain architecture, but neighbouring Applecross has an array of sandstone corries of its own. Beinn Bhan has a whole string of them, with Coire nam Poite being the finest. 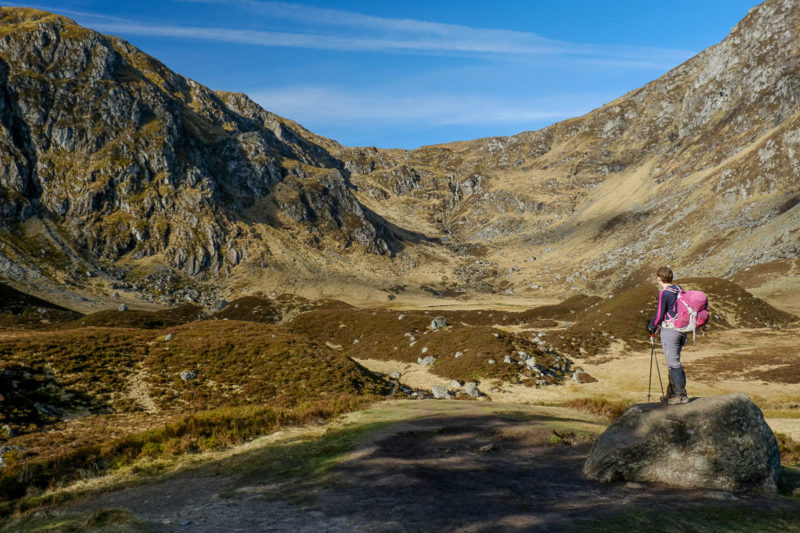 The great bowl of Corrie Fee above Glen Doll at the head of Glen Clova is a National Nature Reserve. It is visited by hillwalkers en route to the Munro summit of Mayar above, but makes a fine walk in its own right. Also worth a mention nearby is Loch Brandy on the other side of the glen. The Cairngorms have a multitude of fine corries. The Northern Corries of Cairngorm are probably the best known, but this is only due to their relative accessibility as there are many fine examples around remoter parts of the range. The big daddy has to be the super-corrie of An Garbh Choire between Braeriach and Cairn Toul, an enormous amphitheatre that has several separate fine corries carved into its upper walls. 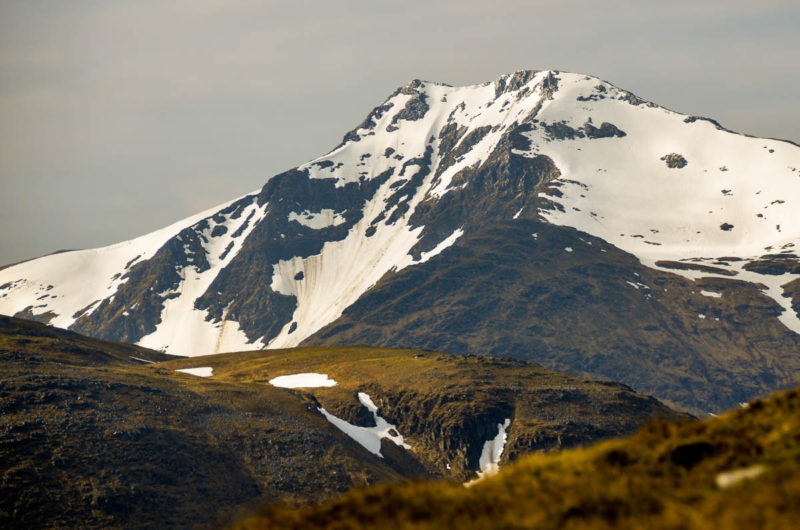 Few corries in the Southern Highlands can rival those further north, but Coire Gaothach – forming the northeast flank of Ben Lui – deserves a mention. The two arms of the coire form scrambling routes up to the fine summit of this grand mountain, whilst Central Gully is regarded as a classic Grade I winter climb for those with the skills and experience. 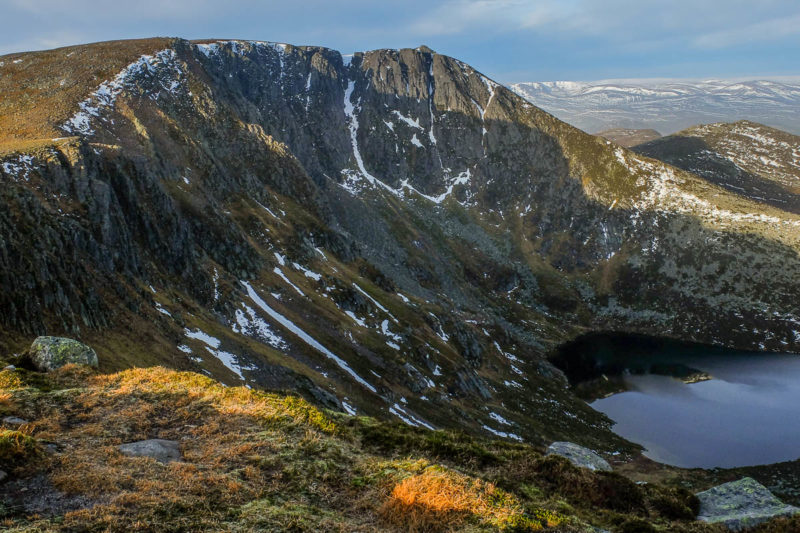 Few would dispute Lochnagar’s northeastern corrie from making this list – but strangely for such an iconic landscape feature, its real name remains a mystery. The name Lochnagar originally was applied to the tiny and picturesque lochan… whilst the cradling cliffs are known only by the names of their individual buttresses and ridges. 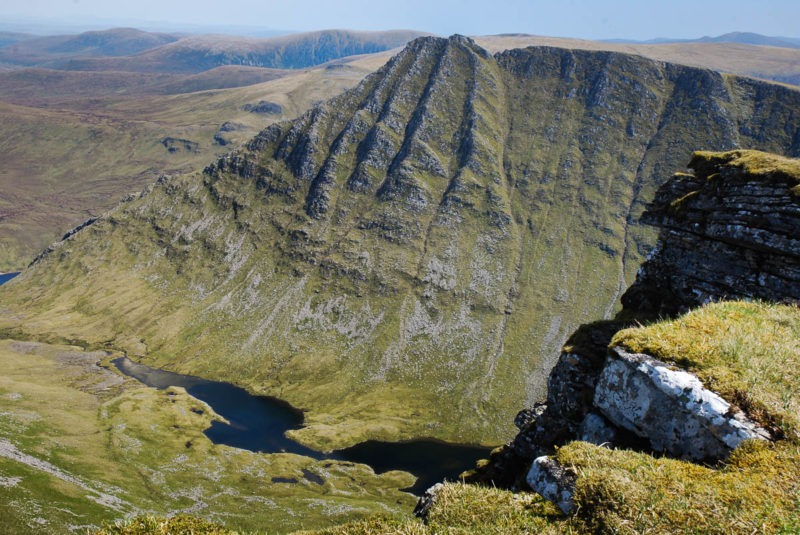 This magnificent amphitheatre forming the northeast side of Seana Bhraigh is very remote – approached via the long miles of Strath Mulzie, though well-placed bothies aid exploration.

Toll an Lochain, An Teallach An Teallach is rated by many as Scotland’s finest mountain. Whilst Glas Tholl just to the north is a magnificent corrie in its own right, Toll an Lochain is undoubtably finer, its namesake lochan overshadowed by the towering crags of Corrag Bhuidhe and Lord Berkeley’s Seat.