Our pick: Scotland’s mountains from the roadside

For our latest gallery we’ve picked out some of Scotland’s most dramatic mountain landscapes that can be seen from the roadside. Inevitably this means many of these mountains rank amongst the country’s best known… but we’ve hopefully included a few surprises too!

An Teallach, Dundonnell near Ullapool Many hillwalkers rank mighty An Teallach as Scotland’s finest mountain. Its two Munros and the Corrag Bhuidhe pinnacles are well seen from several roadside viewpoints; one classic view is a distant one from Loch Droma on the A835 Ullapool road, but the photo above is more up close and imtimate, from the ‘Destitution Road’ to Dundonnell. Ben Hope is best known as the most northerly of the Munros. Rising as it does in isolation from other hills, it provides an impressive sight when seen from the approach road from the north, alongside Loch Hope. Bidean nam Bian is a massive and complex mountain enclosing much of the southern side of the very dramatic A82 road through Glencoe. The most celebrated view is of its three great buttresses that thrust out towards the road – popularly known as the Three Sisters. But there are other aspects of the mountain that are equally dramatic – such as the great wall of Aonach Dubh as seen from the Clachaig Inn, or the western peak of Stob Coire nam Beith as shown above rising behind Loch Achtroichtan. The Cuillin are Britain’s steepest, rockiest and most dramatic mountain range, and their location on the Isle of Skye adds further to their magnetic appeal (yes, they really are magnetic). The famed and celebrated view is that seen from the main road at Sligachan, but we’ve picked out the more extensive views from the minor road through Glen Brittle. The photo above shows the highest peak – Sgurr Alasdair. Stac Pollaidh only just makes it over the 2000 feet needed to be a Graham – but the wee hill well deserves all the attention it gets. A sandstone mountain in the final stage of disintegration, it is well seen from the tiny road that runs along its southern flanks as shown here, but make sure you also see it from the west where it is seen as a steep individual peak. The road past the peak and on to Lochinver is known as the Mad Little Road of Sutherland (in spite of being in Wester Ross!) and certainly provides an entertaining journey – perhaps not for the more nervous driver. 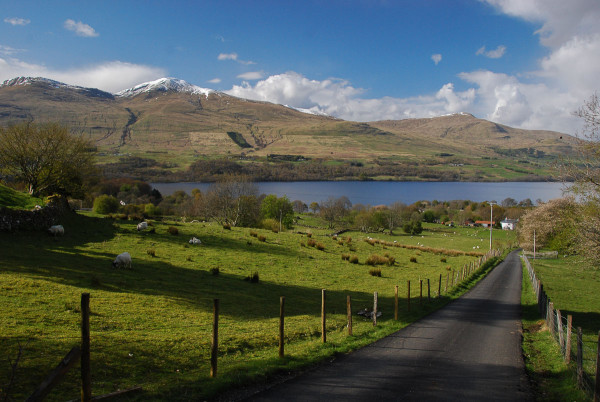 Mighty Ben Lawers is the highest summit in Perthshire. The main road on the north side of Loch Tay foreshortens the views of this massive range. The best views instead are from the south side of the loch, from where Lawers attains its full stature. Your first journey down the tiny road that leads along Glen Torridon from Kinlochewe to the shores of Loch Torridon is likely to be an unforgettable experience – in this ancient and dramatic landscape the appearance of a dinosaur would perhaps not seem out of place. Beinn Eighe impresses first with its vast scree-clad southern slopes sweeping up to its summit ridge, but eventually it is the almost impregnable-looking Liathach that steals the show. The photo is taken from a very short distance south of the road, across Lochan an Iasgair. Buachaille Etive Mor rises as a dramatic pyramid from the A82 Rannoch Moor, making it probably the most photographed mountain in Scotland. The view shown here is from Blackrock Cottage on the branch road to the ski-centre; the mountain looks rockier and steeper (but with fewer good foregrounds or places to stop!) from the A82 itself – look out for distracted drivers swerving as they gawp! Going from the very famous to the very obscure, how many people know Uisgneabhal Mor by name? The beautiful mountains of the Isle of Harris are a dramatic sight, especially when seen from the A859 north of Tarbert. The Cairngorms rank amongst Scotland’s most beautiful mountains for hillwalkers, but in general their most dramatic corners are far from roads, and it requires the effort of a long walk to reach their great showplaces such as Loch Avon or the corries of Braeriach. Given the right light, the great wall of the mountains as seen from Speyside becomes an impressive spectacle, but our pick for a roadside view is of Lochnagar, as seen from the B976 north of Crathie. Quinag is a remarkable mountain from wherever it is viewed, with each of its three separate Corbett peaks being a scene-stealer when seen from different angles. The view shown above is perhaps the finest, however, showing Sail Gharbh from just north of the Kylesku Bridge on the A894. Loch Maree is often claimed to be Scotland’s most beautiful freshwater loch, with its beautiful islands and ancient Caledonian pines. It is the dramatic rocky castle of Slioch, however, that is the finishing touch, making up a scene captured in countless calendars.

The Storr, Isle of Skye Whilst the Cuillin are justly renowned, another Skye mountain view is perhaps even more iconic. The great crumbling rock buttresses of the Storr rise above the famed Old Man, a highlight of the dramatic ridge that forms the spine of the Trotternish peninsula.