It’s a cold, bright winter’s day and I’m sitting in a wooden hide. As I look through an open hatch the sun is warm on my face. Outside the hide, in an adjacent field, is a small pile of raw meat that our guide has dumped onto the ground from a bucket.

I’m staring intently at it but every now and then I glance upwards, scanning the sky. It’s about as unlikely a prelude to a spectacular wildlife display as you could imagine, but something quite wonderful is about to happen and there’s a very real sense of anticipation and excitement. I and four other visitors are at Lerrocks Farm near Doune. And we’re waiting for the famous Argaty red kites to appear.

The red kite is perhaps one of the easiest of our birds of prey to identify. Like the smaller kestrel it is a brown / rusty red colour, especially in sunlight, and has a silver-grey head. They have a large, long tail relative to their bodies, which is often deeply forked in flight, and when the tail is spread to help it manoeuvre in the air it is almost triangular in appearance with sharp edges. This difference can help you distinguish them from buzzards, whose tails are shorter and stockier, and are usually spread out like fans rather than triangles.

The large flexible tail makes the red kite superbly agile. Coupled with its enormous 5ft wingspan, approaching 6ft in larger birds, they are able to stay on the wing and glide for long periods, needing only occasional slow flapping of the wings to maintain flight.

When viewed from below, the underside of the kite’s wings is dark but with noticeable white bands towards the wing tips. The wings also appear to almost bend backwards towards their tips, whereas the wings of a buzzard are held slightly forward.

Their size alone makes red kites look every bit the intimidating raptor but appearances are deceptive. They’re not the powerful sudden strike predators that eagles, ospreys, peregrine falcons or even the relatively diminutive sparrowhawks are.

Those birds use their strength, bulk or speed to catch and kill relatively large prey, whereas kites are weak in comparison and are therefore predominantly scavengers looking for carrion, for an easy meal. In fact they often need other creatures to open large carcasses like deer for them, as they lack the means themselves. 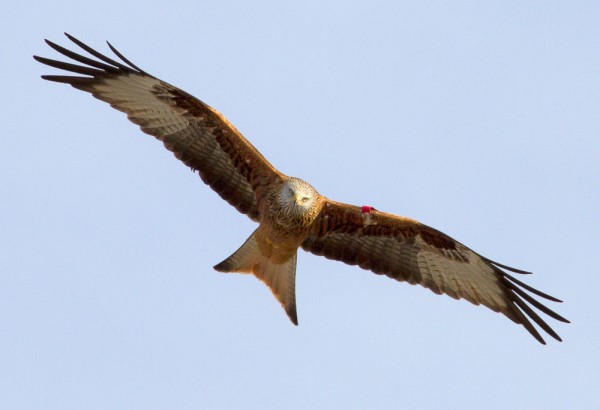 If they do take live prey then it tends to be creatures smaller than themselves like earthworms, rats, voles, pigeon chicks perhaps, but nothing larger than small rabbits. And certainly not livestock.

This isn’t to take anything away from them as a predator, however. They have a niche like everything else in nature and they’re superbly adapted to it. They are one of nature’s great refuse collectors, and they know when there’s meat on the ground to be collected.

Back at Argaty, the meat is there to be collected and the kites know it. Around 20 of them have started circling over the field, definitely showing an interest but for the time being they’re keeping a discreet distance.

Like all the best wildlife encounters there are no guarantees here. After all, these are wild animals and they work to nobody’s timetable but their own. The only thing we as spectators are guaranteed of seeing is the meat being dumped on the ground at 1:30pm.

We wait for them to take the bait but they don’t. Instead they tease, taking it in turns to glide slowly over the meat and then circle away upwards. If I didn’t know better I could swear they’re deliberately feigning disinterest. It feels like a game where they’re daring one another to make the first move.

While the kites play their strange game, other local creatures, evidently oblivious to the rules, show much more of an interest. Crows, magpies and a buzzard all swoop close to the food or plonk themselves down next to it. Occasionally one of the kites takes exception and chases them off. But still no serious move is made.

Then in an instant, without warning, everything outside is moving at speed. The commotion kicks off so quickly that I completely miss what starts it. I think one of the crows or a buzzard takes and flies off with a piece of meat, and in an instant there are kites swooping down at the pile, grabbing pieces on the wing and flying off with them.

Snatching meat from the ground

It’s frenzied now. Crows are unceremoniously elbowed out of the way as kite after kite swoops down with impressive accuracy. In the midst of it all, a giant gangling heron glides in like a pterodactyl and skewers some meat too. But the kites keep coming, and when I look up there are 30 or more of them circling, swooping, diving and jostling.

It’s an incredible sight, but what’s even more incredible is that this wouldn’t even have been possible just 25 years ago. Because before then, there were no red kites in Scotland.

The red kite’s story is depressingly familiar. A native bird of prey driven to extinction by relentless human persecution. But unlike some of the other birds of prey in Scotland, the red kite was once held in high esteem.

As a scavenger that lived in and around burgeoning medieval towns, kites were valued for the role they played in keeping waste under control, much like our unloved gulls do today. They were protected by Royal Charter for that very reason. But the kite’s fortunes changed in Scotland in 1457 when James II listed them as vermin, saying they should be killed wherever they were found.

Protection in England and Wales continued for 100 years or so but kites, as well as countless other wild species, then fell foul of the Tudor vermin laws because they were seen as competitors for the agricultural food being produced. It was all downhill from there.

The Victorian era saw the persecution intensify across sporting estates and, as the birds became increasingly scarce in the wild, they then drew the attention of rare egg collectors and taxidermists. The result was inevitable. Red kites became extinct in England in 1871, and the last Scottish birds are believed to have been recorded in Invernesshire in 1879.

Only a few Welsh birds survived the persecution, driven to the margins on poor unproductive habitat in Mid Wales. The 1930s marked the survivors’ low point, with only 20 birds left in Wales, and total extinction seemed a possibility.

The first ‘kite committee’ was formed in 1903 when efforts were made to try and safeguard the remaining nests. This surprisingly early intervention by early conservationists means that the red kite recovery programme is one of the longest running of its kind anywhere in the world.

Things improved markedly in the post-war period with new protective legislation and the Welsh population began to recover. But it was clear that without assistance the birds would be slow to naturally colonise their former ranges. 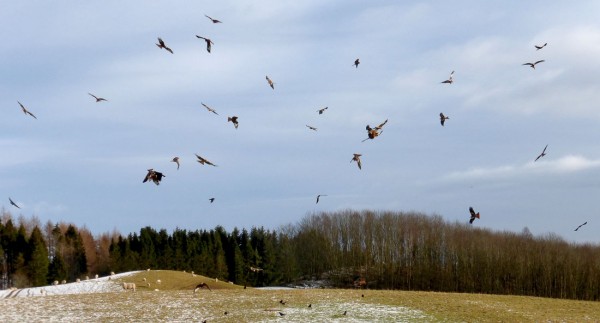 Upwards of 30 red kites feeding at Argaty. An incredible sight.

In 1989 the first release programmes began. One was in the Chiltern Hills just west of London, and the other was on the Black Isle near Inverness. Chicks were taken from nests in Sweden, Spain and Wales, in each case ensuring the donor parents were left with at least one chick to raise, and these were then released into the wild in England and Scotland a few weeks later.

93 were released at each location and then, in 1992, the first wild-born Scottish chick in 120 years fledged. Three years later in 1995, the first chick born to Scottish-born-and-raised red kites fledged. Red kites were back.

Red kites are gregarious and social creatures, and their populations can remain rather localised. Further release programmes therefore followed across England and Northern Ireland to widen the red kite distribution and link the disparate populations together. In Scotland this happened successfully in Stirlingshire, Dumfries and Galloway, and Aberdeenshire. There are now thought to be around 2000 pairs of breeding red kites in the UK, and the most recent figure I can find for Scotland is 214 pairs in 2012.

While things have certainly moved on in Scotland in the last century, with many landowners and estates welcoming the kites with open arms, persecution still remains the biggest threat to their survival. It was estimated that between 1999 and 2006, 166 kites from the Black Isle population alone were illegally poisoned. And in 2014, 16 kites and 6 buzzards were found poisoned in Ross-shire in what remains Britain’s worst single raptor poisoning incident.

The juvenile birds that do survive venture far from their homes in their first years, and Scottish birds have been recorded as far away as Spain and Portugal! But most remain in the UK, and birds from the different release sites are intermingling, which is what you need in order to maintain a healthy genetic mix throughout the population.

These movements around the country are easy to monitor because of a national coding scheme for red kites. If you spot a kite in the wild, look for the lightweight coloured tags on its wings. The colour of the tag on the bird’s left wing indicates what geographical area it hatched from, and the tag on its right wing indicates the year it fledged. The Argaty (Central Scotland) kites have a red tag.

Back at Argaty, with the meat all gone and the kites dispersing, the show is over all too quickly. There wasn’t much meat to split between 30 or 40 kites to be honest, but this is quite deliberate.

Though supplementary meat is put out on a daily basis it isn’t meant to be a replacement for what the kites can find naturally in the area. They each get perhaps one small chunk of meat, which mightn’t seem like much, but for a species still on its way back from the brink it means a little extra security, especially in the winter months.

It also provides a chance for the public to get up close to these magnificent birds in controlled conditions, and for the farm to use the kites (who had the good fortune to favour the farm as their roost site after they were released almost 20 years ago), as an educational resource. You can’t beat a bit of first-hand awareness-raising to promote the countryside and the wider theme of conservation.

Where to see Red Kites in Scotland

You stand a good chance of seeing red kites in much of Scotland now, but the feeding stations allow you to get up close to watch their aerial acrobatics. If you’re lucky, you’ll get as superb and memorable a display as I did.