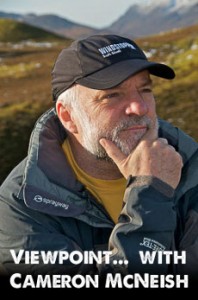 As far as I am aware no European Government has put an outright ban on wind turbines on particular areas of their country that are seen as nationally important in terms of landscape quality. The much-criticised Scottish Government could well be the first to do so.

As I suggested last month the Scottish government wants relatively large areas of Scotland set aside as turbine-free. They have now made their position public.

In new planning guidelines that have just gone out for consultation the Scottish Government has announced an outright ‘ban’ on turbines within National Parks and National Scenic Areas. That is something many of us have been calling for. Additionally, those areas that fall within the much-discussed Wild Land map that Scottish Natural Heritage has drawn up and which are not covered by the National Scenic Area designation, will be recognized as a precious national resource where large scale development would be discouraged. Such developments would be assessed on a case-by-case basis but the general presumption would be against development. The new planning guidelines will make it much more difficult for developers to win approval for large-scale windfarms in such areas.

As a result the proposed guidelines will mean that the Scottish Government will set aside about 30% of Scotland’s land mass as protected areas.

I’ve no doubt that the media will brand this a “U-turn” by the Scottish Government but it isn’t really. The much quoted phrase, supposedly made by Alex Salmond about Scotland being the Saudi Arabia of renewable energy is in fact a mis-quote. What the First Minister actually said was that Scotland could be the Saudi Arabia of ‘marine renewable energy’, quite a different thing.

In all the conversations I’ve had with the First Minister and with Government officials the main thrust has always been on the mix of wave and tidal energy and off-shore wind. But, as I pointed out in my column last month, wave and tidal technology is not ready yet. When it is then the greater emphasis , the main thrust, of renewable energy will be at sea. On-shore windfarms are merely a stop gap.

I also made the point in last month’s column, in the interest of transparency, that I’m a member of the SNP and a supporter of its renewable energy policy but I would also make the point that I personally don’t like windfarms – I think they are ugly, they damage the environment and I have yet to be convinced that they are efficient at producing the amount of energy we will need in the future. But I am in the minority. Poll after poll has shown that wind energy has cross-party political support and strong public support. The only political party to oppose windfarms is UKIP but I, for one, would find that insufficient reason to even consider supporting such a right-wing organisation.

Despite the public support for windfarms the Scottish Government is well aware that here, on the very edge of Europe, we have some of the most marvellous landscapes imaginable and that those landscapes should be protected, not only for future generations to enjoy, but for the wildlife that needs such landscapes to exist and thrive in.

In an attempt to find a balance between ensuring future energy needs in the face of diminishing fossil fuels, combating climate change, contributing to climate justice and protecting the finest of our natural landscapes the Government has gone a long way to meet the calls of the likes of the John Muir Trust and the Mountaineering Council of Scotland for a national planning policy that specifically identifies areas that should be spared from industrialisation. 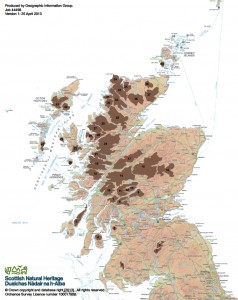 Despite this, I have little doubt that Alex Salmond will get flak from the developers, the green extremists and from many within his own party. I don’t doubt he’ll also get severe criticism from the anti-turbine lobby, those campaigners who don’t want to see windfarms anywhere, not even off-shore, and those unionists who will use any controversial issue as anti-independence propaganda. I personally believe these proposals represent a huge step forward in safeguarding our finest natural assets, a bold statement in this Year of Natural Scotland.

I suggested last month that in the face of political and public support for windfarms we hillwalkers and outdoor enthusiasts might have to accept some crumbs from the table, some crumbs that could turn out to be a generous slice of cake. As I look at a map of National Scenic Areas (www.snh.gov.uk/docs/B691407.pdf) I’m encouraged by the landscapes that will be protected – South Lewis, Harris and North Uist; the machairs of South Uist; Hoy and West Mainland Orkney; North-West Sutherland and the Kyle of Tongue; Assynt and Coigach; the Dornoch Firth; Wester Ross; Trotternish and the Cuillin of Skye; Glen Strathfarrar, Kintail, Glen Affric and Knoydart; the Cairngorms, Deeside and Lochnager; the Small Isles, Morar, Moidart and Ardnamurchan; Loch Shiel, Loch Rannoch and Glen Lyon; Loch Tummel and the Rivers Tay and Earn; Scarba, Lunga and the Garvellachs; Knapdale, Jura, Kyles of Bute; Loch Lomond and the Trossachs; North Arran; Upper Tweedale, Eildon and Leaderfoot; the Nith Estuary, the East Stewartry Coast and the Fleet Valley. That’s a pretty substantial slice of cake!

Andrew Thin, the chairman of SNH, is said to back the policy, not least because it offers clarity to developers, as well as protecting some of the most compelling and beautiful scenery in the country.

The guidelines have emerged in the revised drafts of two documents, the Scottish Planning Policy and the National Planning Framework, both of which have just gone out for consultation to amongst others, the Ramblers, the Mountaineering Council of Scotland and the John Muir Trust. For me it’s a grand slice of birthday cake with which to celebrate this Year of Natural Scotland.