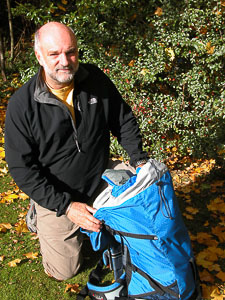 The route combines sections of official routes such as St Cuthbert’s Way, the Southern Upland Way, the Forth and Clyde and Union Canals, the West Highland Way and the Rob Roy Way. Other parts - including sections through central Perthshire, the Cairngorms and the Northwest Highlands - make for a more serious backpacking route with neither waymarking nor a continuous path, as well as a number of potentially hazardous river crossings. The difficultly generally increases as the route heads northwards. Walked in its entirety, the route will surely come to be regarded as Britain's toughest and yet most varied backpacking challenge. Far more walkers will enjoy tackling individual legs a section at a time - particularly of the more accessible southern half of the route. Walkers can mark off which stages they have completed on our interactive map below.

Every stage of the Scottish National Trail now has a fully detailed stage description and mapping on Walkhighlands, accessed via the stage list and map below.

Cameron has also made a two part BBC TV documentary (shown in December 2012) and written a book about the route - 'Scotland End to End'. Rather than being a fully detailed guidebook (like the stage descriptions and mapping above), the book is an account of Cameron's experiences along the trail, giving a real flavour of the terrain passed through, with plenty of interesting anecdotes and stories covering both local history and wildlife. The book is illustrated with photos by Richard Else. At the bottom of this page you can watch a video released for the launch of the trail.

Share your report for the chance to win gear every month