The stunning Ardnamurchan peninsula is the most westerly part of the British mainland and is quite literally the end of the road. This is a beautiful but unforgiving and remote corner of Scotland, with amazing seascapes over the islands seemingly around every corner. The harsh landscape is releived by a whole series of superb sandy beaches, whilst the peninsula ends with an elegant lighthouse.

The name Ardnamurchan these days is often taken to include the neighbouring districts of Morvern, Ardgour, Moidart and Sunart, all a world away from the bustling A82 across the Corran Ferry. The village of Strontian is the main centre of population, on the fringe of the magnificent Atlantic oakwoods, sometimes referred to as Scotland's rainforest. The interior is as wild and mountainous as any in the Highlands, with a score of fine peaks that tempt the discerning hillwalker. 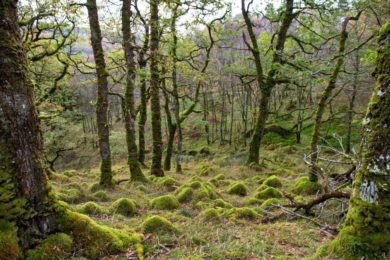 "A bit of rebranding works wonders for the underappreciated. Back in my bagging days the idea of spending more than an hour roaming a squelchy woodland would have been a complete anathema to me. Not that I didn’t appreciate woodland or forest at the time, mind..."