Mooching around in the gloaming, seeking a good pitch. I crossed the burn, up to my shins, surprisingly cold, fast and flowing hard. Widely spaced birch and thigh high grasses looked enticing from a distance, but the earth was sodden. Reluctantly, I turned around and crossed back. Reaching the bank, something made me freeze and look up from placing my poles carefully as I exited the riverbed. Climbing a steep hummock into the undergrowth and therefore seen from above, an animal the size and shape of a large cat. It was too dark to distinguish colour, the very last light leaching from a dull evening of summer drizzle. But I could see this much – dark and mottled. The animal was not a badger; it had a long tail and a flat head, no snout. A few hairs stood on the back of my neck, my heart pumped a bit faster than normal. Had I just seen a wildcat? I’ve been back to Craig Meagaidh, or the ‘Bogland Rock’ three times now in only a few months. Usually when I travel north from the central belt, I go in search of perspective offered by the tops, but here I went for the woods. There are hills here too, of course – 3 munros that I visited with a friend on my second trip in cloud, wind and rain before dropping down to shelter. But the woods were the chief draw. This is an old place, renewed again. Birch, alder, oak, willow, hazel and rowan sit on strange, enchanted hillocks either side of the Allt Coire Ardair, the loose, silty moraines left behind by the glaciers that last slow-motion-smashed this place into it’s current shape 18,000 years ago. And there are not just trees on the lower slopes under that enormous plateau. The woods are surrounded by heathland and their roots entwined with heathers, blaeberry, bearberry and azalea. Off the path, the terrain here is exhausting, especially post holing in fresh snow. It’s best to find the slim and winding deer tracks that trace the river’s line or ride the crests of the moraines. This was my way out of the woods the first time, through the sopping wet Caledonian rainforest, to cross the river, bushwhack steeply through tightly packed birch to the heath 100 feet above a collapsed bank and eat soggy oatcakes in fine, warm rain. Four of the deer that made this path cantered past my camp on my second visit, and I spied the same family on my third, when I followed their track to the same camping place under the oak. A hind and three yearlings, slightly grown since the summer. As a city dweller I wouldn’t expect to recognise them, but there they were, unmistakeably the same four. 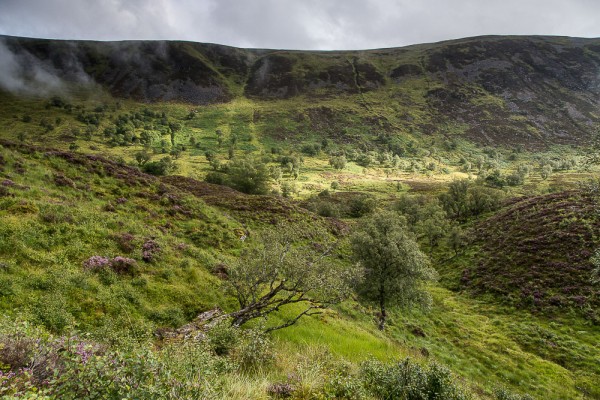 It was alive with greens, yellows and purples in there, the tiny trail bordered with bushy mosses and lichen covered boulders scattered from millennia of river spate, the way dotted with pine marten droppings and the air buzzing with dragon flies and midges – verdant and writhing and rotting together. Even with my untrained eye, I spied orchids, wood cranesbill and artic starflower, and saw one of my favourites – just a regular willow warbler – dart and hop from tree to rock. One of the most simple, wonderful things about following a path used almost exclusively by animals is that fallen branches cross it. It’s possible to tell something of the size of animals using the track by the height of the branches not moved or broken. Following a trail like this it’s possible to shed a few layers of ego, onion layers not peeled deliberately but that gently fall as I walk. As I pick my way through, I grow more careful of my footfall, not wanting to leave any trace of my passing. It’s fanciful of course, but I can almost imagine I am a woodland creature myself. Besides, it’s fun to tiptoe, even in the damp. Apparently there are black grouse in here somewhere, and dotterel high above on the plateau, but my eye (or feet) aren’t trained so well that I’ve managed to catch a glimpse. These woods are magic, a tonic for troubled times if not for tortured limbs, but this magic has taken a good deal of time to work it’s spell. I’m used to thinking about the old forest of Caledon as being all Scots pine, but the birch woods of Creag Meagaidh have their roots dug just as deep. Once the forest covered this area as high as 600m, but as birch lost it’s economic value over the last 2 centuries, sheep grazing decimated the woodland here. In the 1970’s the area was cleared of sheep to make way for deer stalking, further compounding grazing issues. All too common themes across Scotland. By 1983, a commercial forestry company had their eyes on the last of it, but the plans proved so controversial they were partially rejected by Secretary of State and thereafter abandoned by the company as uneconomically viable. At this point, the predecessor to Scottish Natural Heritage, the Nature Conservancy Council stepped in with a view to protecting the scientific and environmental designations and regenerating the woodlands. 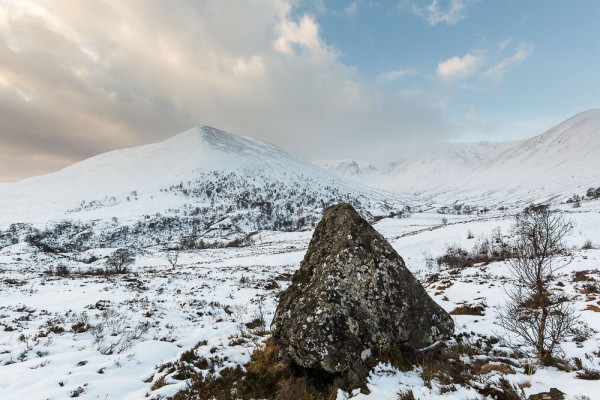 Those deer I’d seen on my visits are not fenced in or out, and this too was controversial for the new owners in the early days. Neighbouring estates were worried that control of hungry mouths by culling alone would cause a vacuum and draw deer into the reserve and away from paying custom. All the evidence now points to the opposite. A fine balance has been struck over the last 25 years, those previously sceptical have been won over and the adjoining estates have no complaints, despite on-going culling at what might be considered high levels elsewhere. I’ve seen terrible pictures of deer dead from exposure and starvation, pressed and tangled against fencing that protects regeneration in other parts of the country. Deer are naturally woodland creatures, so Creag Meagaidh is a real success story for them as much as the trees. It’s arguably becoming a benchmark case, and a lesson in calmly putting conservation objectives before fears of ‘what might happen if…’ 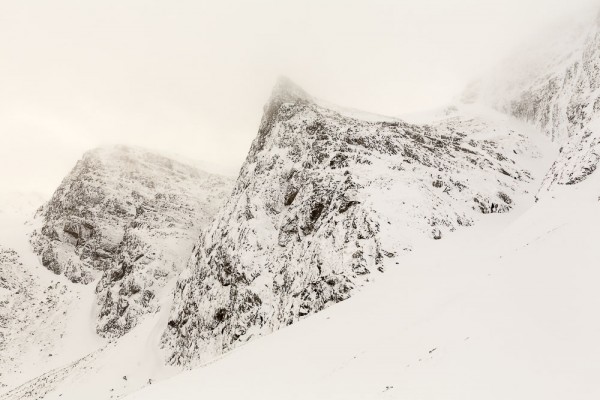 On my last visit in the snow, I became very aware of the geographical position of Creag Meagaidh, halfway between east and west, right on the watershed with one foot in the lowlands and another in the highlands, it’s habitats ranging from wooded retreat, intimidating rock faces which seem to scream ‘sublime!’ en route to exposed alpine tundra. With the green leaves gone for the winter, the woods were shadows of their former selves – dense spidery silhouettes against the white. Instead the towering, muscular scale of the surrounding mountains was emphasised. A huge overnight thaw had me abandoning my campsite at first light, and as a world of snow drained into the basin that impression was reinforced. As the interpretation on site indicates, the Bogland Rock frames the transitions and thresholds between summit and valley perfectly. 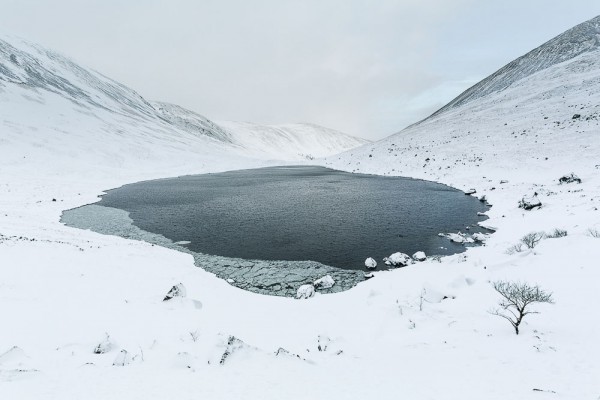 I turned the corner and looked into the headwall. The treeline appeared to have petered out, but on second look there’s evidence of regeneration right up into the head of the coire. A few dwarf trees shelter in the lee of boulders around the lochan’s edge. There are arctic char in the waters here, and rare plants like alpine speedwell on cliff ledges far above, but I was amazed to see trees in that exposed place.

Down in the glen again, there is an inscription made on 4 stones alongside the path, translated from The Tree of Strings by the poet Sorley Maclean. Each of the stones is separated by a few feet of path, just like lines separated on a page, that allow reflection as you walk:

I saw
the tree rising
in its branches
the jewelled music

The music played at Creag Meagaidh is an utterly beautiful thing. You don’t need more of my words: just go hear it for yourself.

Route descriptions to discover the area yourself:
Coire Ardair (walk into the corrie)
Creag Meagaidh circuit (round of 3 Munros)