If you are into bagging Munros, there’s nothing more satifying than completing a walk that includes several of the prized 282 summits. Not all Munros are equal, and whilst some solitary Munros involve a great deal of effort, there are many places around Scotland where you can tick off multiple Munros in a single day’s outing. Here’s our picks – including some real epics… 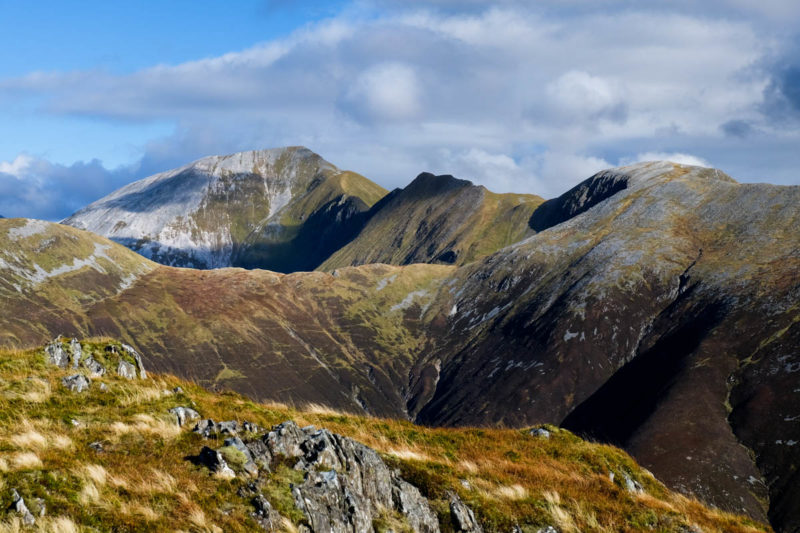 The Ring of Steall is one of Scotland’s great classic hillwalking days – a horseshoe of narrow ridges that takes in four Munros (though it used to be five before Sgor an Iubhair was demoted in 1997). This is enough of a challenge for most, but the ultimate challenge for the uber-fit hereabouts is a complete traverse of the Mamores’ ten Munros. Our Grey Corries route takes in three Munros, but can be extended to four by starting with an ascent of Stob Ban. For the uber-fit and mountain runners, trickier terrain sees the ridge extended to the Aonachs or even Carn Mor Dearg and Ben Nevis – an epic mountain marathon known as the Lochaber traverse. 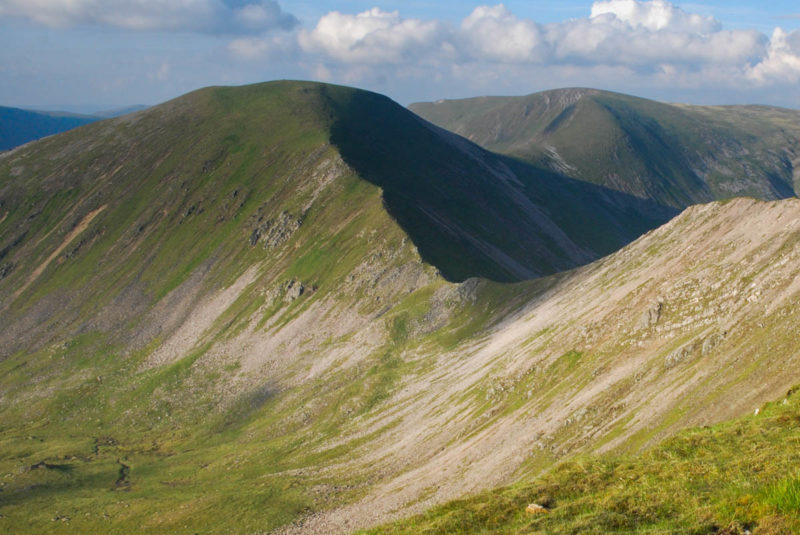 This is one of the least-known routes on this list – thanks largely to its remote position requiring a long approach. This ridge of four Munros – Carn Dearg Geal Charn, Aonach Beag and Beinn Eibhinn – lies just to the north of Ben Alder and makes for a magnificent walk. Most will attempt it from a camp by the former Culra Bothy; only fanatics would attempt to add in Ben Alder and Beinn Bheoil as well. 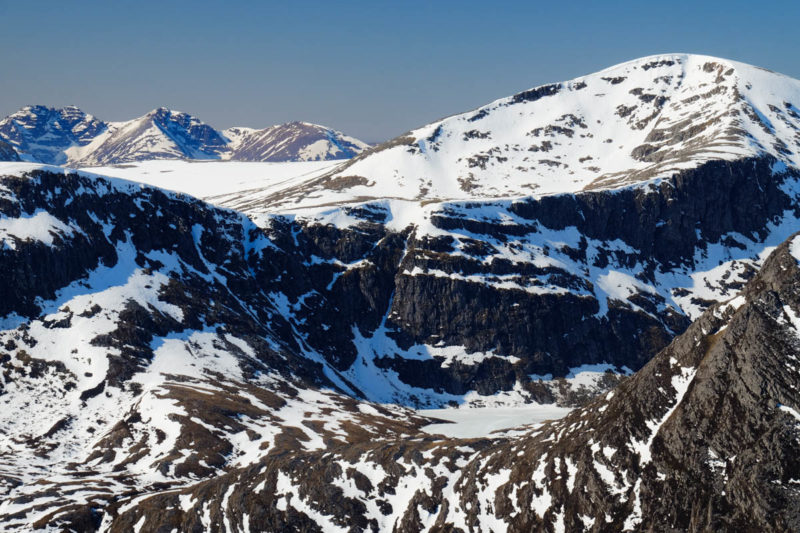 Our Beinn Dearg route is a long day taking in four Munros, with some wild and impressively rocky terrain as well as wonderful views. The fifth Munro in the group – Seana Bhraigh – would make it a complete epic. 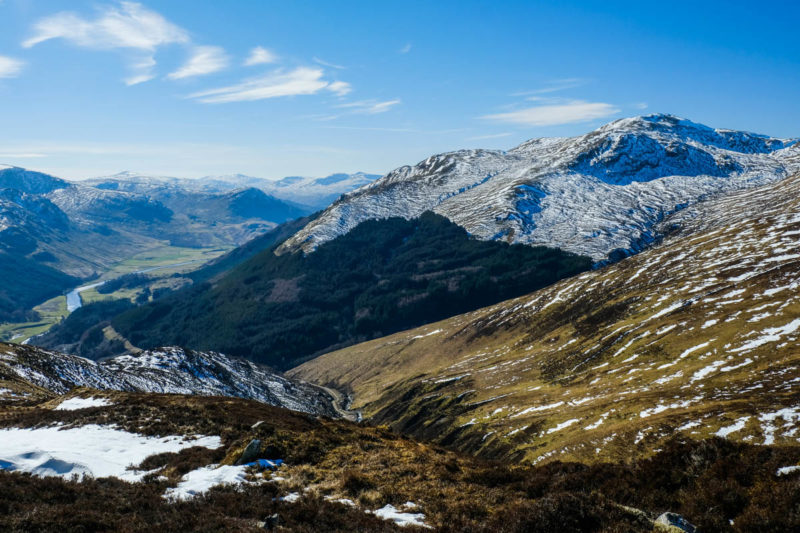 Rising on the north side of beautiful Glen Lyon, the Cairn Mairg group makes for a fairly straightforward outing considering it includes four Munro summits. 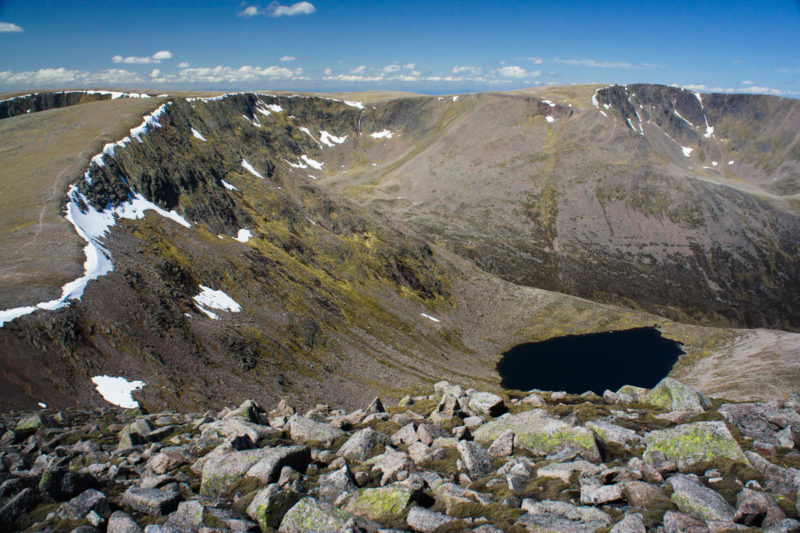 A true Cairngorms classic, this very long outing heads through the Lairig Ghru before ascending four Munros from the Devil’s Point to mighty Braeriach. Much of the route lies around the rim of the Garbh Choire – a vast super-corrie which is one of the largest in Scotland.

Sgurr Mor and the Eastern Fannichs 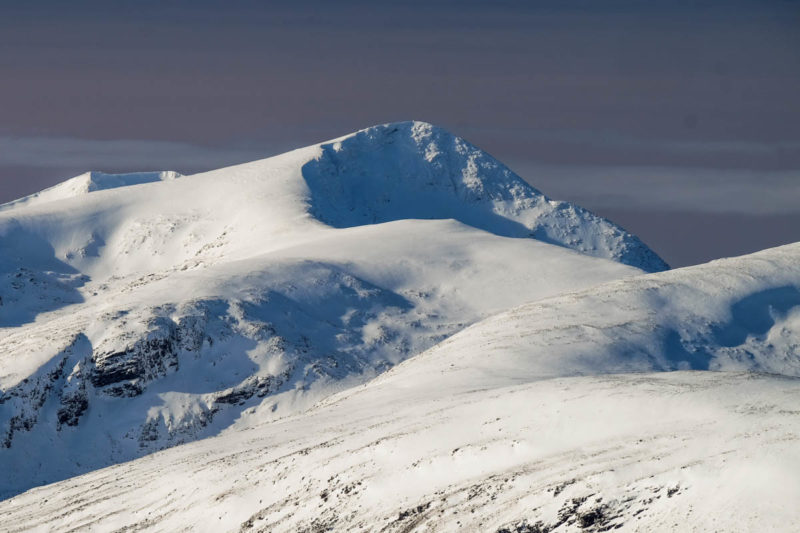 The pointy peak of Sgurr Mor rises over its neighbours, and our round of it and the eastern Fannichs is enough of a hillwalk for most. The super-fit could extend to take in the next three Fannichs peaks – Sgurr nan Clach Geala and its neighbours – whilst fanatics might also take on Sgurr Breac and A’ Chailleach to complete the 9 Munros on the Fannichs ridge.

The Five Sisters of Kintail 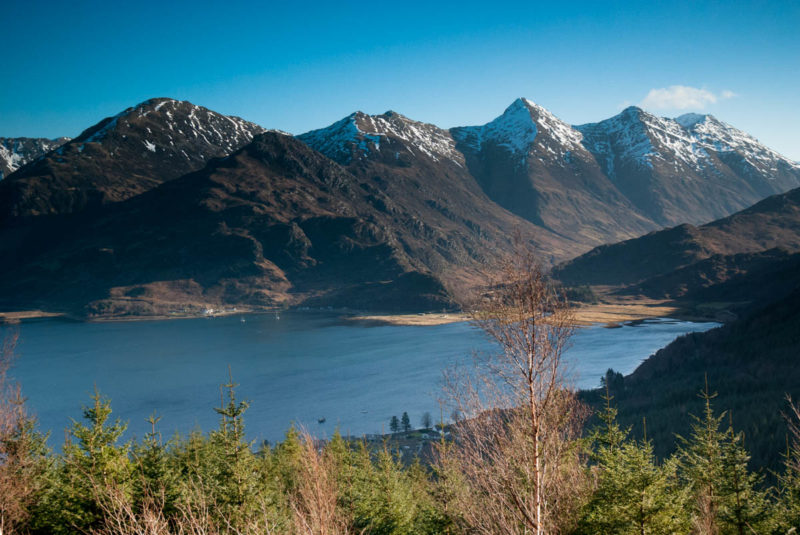 Only three of the Five Sisters of Kintail attain full Munro status, but no matter – this is a truly superb ridgewalk in stunning surroundings. The ultimate challenge for the uber-fit is the complete traverse of the full ridge along the north side of Glen Shiel – Ciste Dubh and the so-called Brothers and Sisters – making for seven Munros in all. 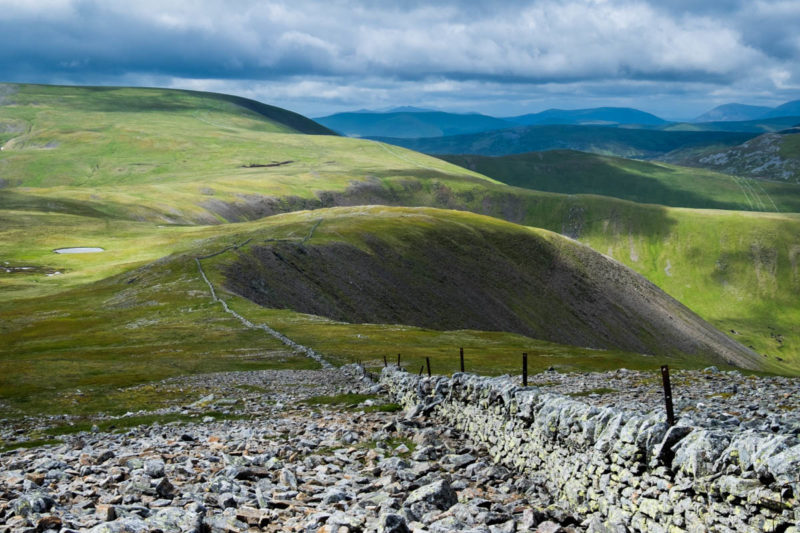 The standard Glas Maol round takes in four Munro summits set on the plateau on the east side of the Cairnwell Pass. Some baggers extend the route to take in Tolmount and Tom Buidhe – though the approach to these rounded summits from this direction omits their most interesting features. 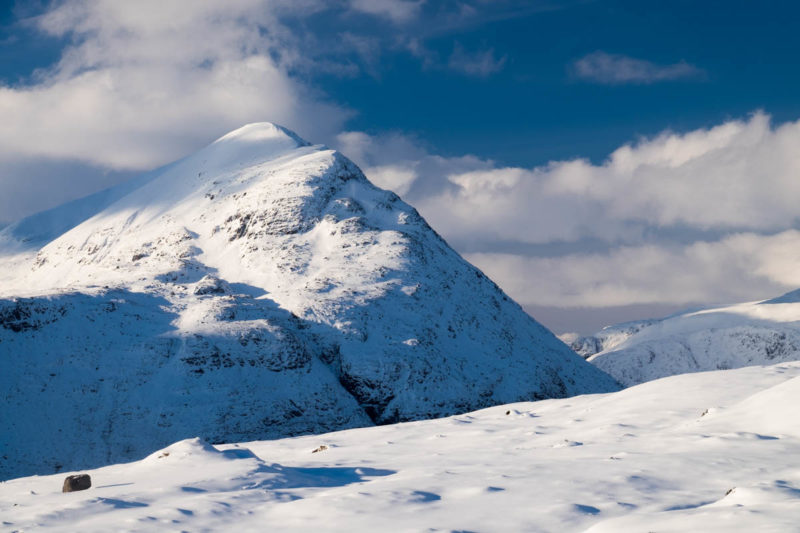 For many years this classic and very challenging horseshoe took in six Munros, but the demotion of Beinn a’ Chlaidheimh means that the Fisherfield Six is now five Munros and one Corbett. No matter, the route involves an overnight camp or a stay at Shenavall bothy for most, and even from there it is a demanding summer outing (don’t try it all in winter as pictured here!) with some of Scotland’s most magnificent mountain views. 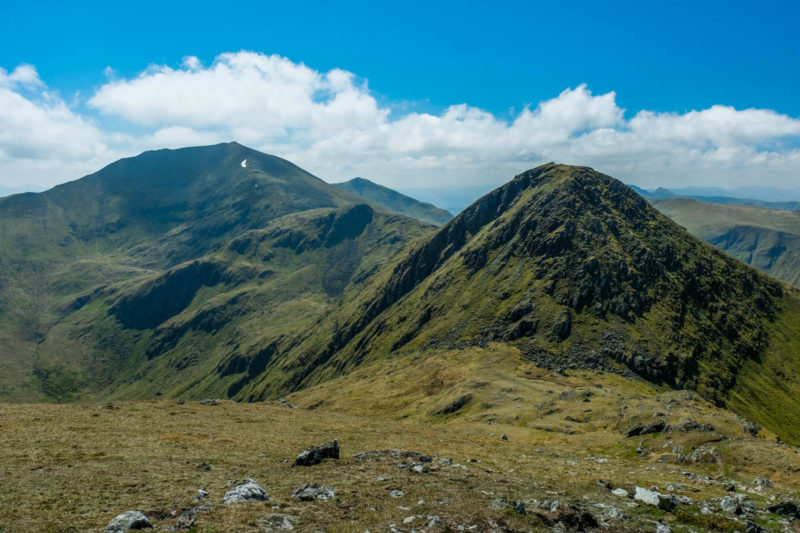 We split this range of seven Munros into three groups. If transport can be arranged, the Meall Greigh, Meall Garbh and An Stuc round of three Munros can be extended over Ben Lawers and Beinn Ghlas (best done in the reverse direction). If attempting to include Meall Corranaich and Meall a’Choire Leith as well then the best start point for an epic round of seven is Camusvrachan in Glen Lyon to the north – though Meall Greigh is rather dispiriting from here!

Lochnagar and the White Mounth 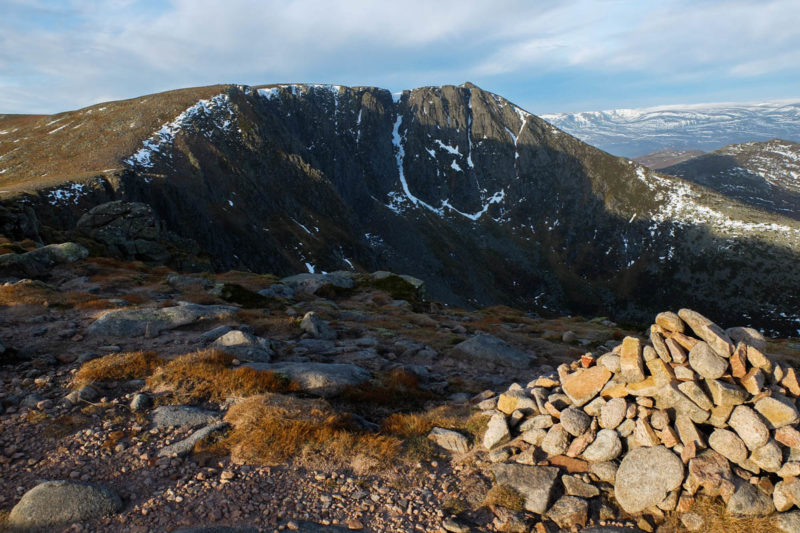 Starting with impressive Lochnagar, this round of five Munros is over 29km in length, but in good conditions the rolling plateau on which most of the summits are situated mean that the walk is well within the capabilities of most regular hillwalkers. 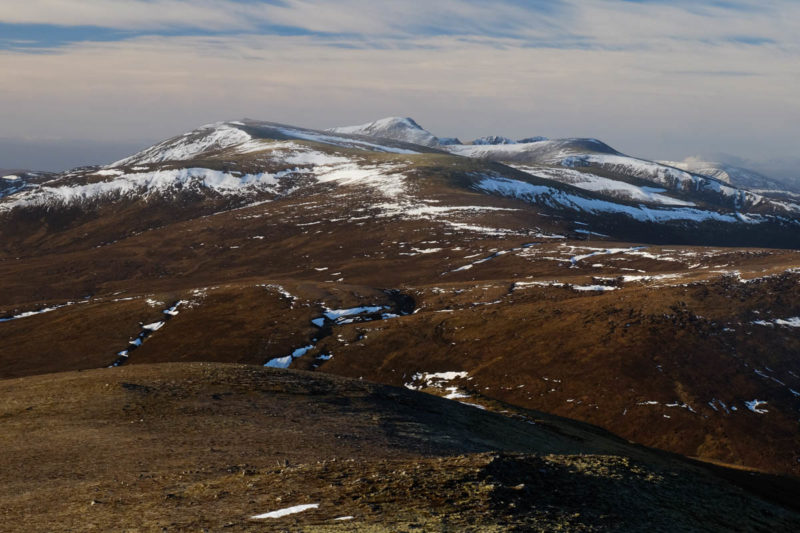 Strathfarrar has some magnificent Caledonian pinewood remnants lower down, and a horseshoe group of four Munros on its nothern side. The approach road up the glen is private and our route description gives details of the access arrangements (open to all in summer, but only for members of Mountaineering Scotland in winter). 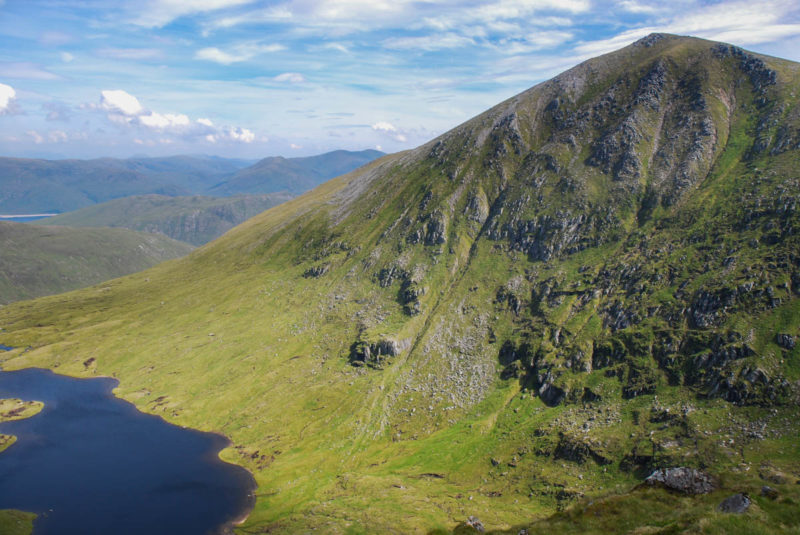 The four Munros on the north side of Loch Mullardoch are left by many Munro-baggers until late in their round, probably due to their remoteness and the long return walk along the north side of the loch. The ridge walking itself, however, is superb – this is a route of real character. 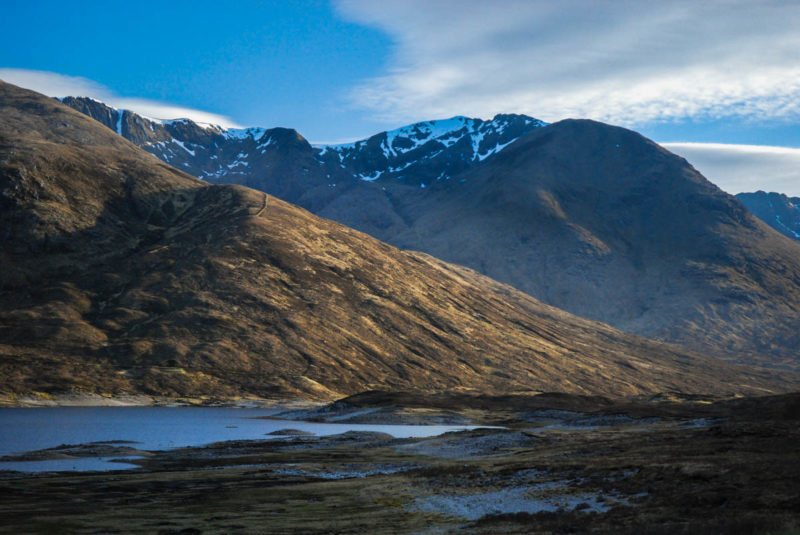 The magnificent ridge enclosing the south side of Glen Shiel is completed in a single outing by most hillwalkers despite famously having seven Munros – the ultimate day out for baggers! If that’s not enough (really, it is), trickier terrain leads on up over Sgurr a’ Bhac Chaolais to link with two more Munros – Sgurr na Sgine and the Saddle (don’t!).

Check out also our pick of 10 of the easier Munros, and the 10 finest Munros.