One of our most popular posts last year was our pick of Scotland’s most picturesque villages. This time we take a look at larger centres, highlighting 15 Scottish towns which make great bases for outdoors activities. All of the links below give access to places to stay as well as routes to walk. The attractive grey stone buildings of Aberfeldy cluster on the south side of Scotland’s mightiest river, the Tay, and serve as a gateway to the lower end of Loch Tay and to beautiful Glen Lyon. The town is a great base for countless family walks (the local Birks o’ Aberfeldy was celebrated by Burns), as well as for Perthshire’s Munros and as an important final staging post on the Rob Roy Way. Try to think of a Scottish town associated with the outdoors, and it’s likely Aviemore will come instantly to mind. Once a quiet village, the town expanded greatly through the 1960s after the first Scottish ski development was built on nearby Cairn Gorm, and the Aviemore Centre was opened in the town. Today Aviemore is thronged with outdoors-lovers both summer and winter and the main street is lined with outdoor gear shops. As well as being a gateway to the high mountains, the town is close to some of our best known family walks such as Loch an Eilein in Rothiemurchus Forest, whilst Craigellachie offers a grand walk from the centre of town. On the other side of the Cairngorms on the banks of the River Dee, Ballater has a completely different feel to Aviemore. This handsome town with its Royal connections (Balmoral is nearby) is centred around an attractive green, and its compact streetplan has many beautiful stone buildings. Ballater provides a more sedate base for those exploring this side of the Cairngorms, and lies close to the popular walks around Loch Muick at the foot of Lochnagar. Craigendarroch offers a fine shorter walk from the heart of the town itself. Callander is the largest town entirely within the Loch Lomond and the Trossachs National Park, and its position makes it very popular both as a gateway to the Trossachs and into the true Highlands beyond. The area was romanticised by Sir Walter Scott and has many associations with Rob Roy Macgregor; the many lochs, forests and mountains led to it becoming known as the Highlands in miniature. Callander Crags and the Bracklinn Falls offer short walks from the town, whilst Ben Ledi provides a challenge in every view. The town also lies on the route of both the Rob Roy Way and the Scottish National Trail. Dunkeld is another town on the very fringe of the Highlands. Set on the mighty River Tay, this ancient and historic small town was Scotland’s first ecclesiastical capital. It offers some superb local woodland and riverside walks, as well as a chance to visit the Osprey centre at Loch of the Lowes; for others, it is a gateway to the mountains beyond. Fort William is the largest town in the West Highlands and makes no bones about its status as a base for outdoors-lovers – styling itself as the Outdoor Capital of the UK. Its claim is a strong one – it lies at the base of our highest mountain, the mighty Ben Nevis, and on the shores of Loch Linnhe. Walkers, rockclimbers, scramblers, sea kayakers, winter mountaineers, and even canoeists on the Caledonian Canal can all enjoy their activities from here. Additionally it’s the end point of the West Highland Way – and the start of the Great Glen Way, the Cape Wrath Trail and the East Highland Way. Around 20km down the River Spey from Aviemore is Grantown-on-Spey, a planned Georgian town set on the fringes of the beautiful pines of Anagach Woods. The official capital of Strathspey is a more sedate place than its upstart modern neighbour, and it has forged a reputation as a base for wildlife and nature lovers. Capercaillie, red squirrels, crested tits and Scottish crossbill are just a few of the species sought out by birders and nature enthusiasts. The town is also a staging post for those canoeing down the Spey, for walkers on the Speyside Way and marks the end point of the Dava Way. Heading the opposite way from Aviemore, up the Spey, is the region of Badenoch and its twin-like towns of Kingussie and Newtonmore, just a few kilometres apart. The two stone built towns are a quieter gateway to the Cairngorms, to beautiful Glen Feshie, or for the vast empty spaces of the Monadhliath. Set near the very heart of Scotland, they also make perfect bases for those touring over a wider area. 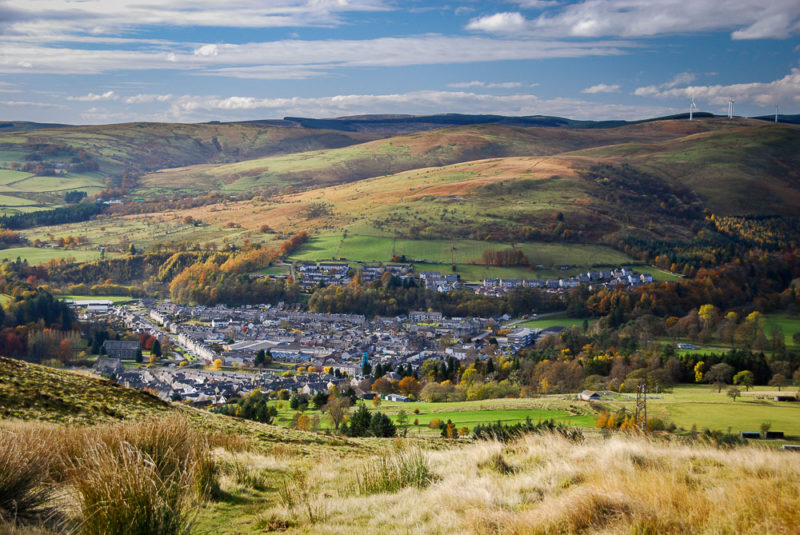 Less than 10km from the border with England, Langholm is perhaps one of the lesser known destinations on this list. It makes a great base from which to explore Eskdale – great mountain-biking and walking country – and has a fine network of walking routes starting from the town itself. Nestled at the foot of the shapely Eildon Hills, Melrose is perhaps the most attractive of all the old Borders towns. This old centre has the romantic ruined Abbey as its centrepiece. It’s a real cross-roads for long distance walkers, being a key staging post on the Southern Upland Way and the Borders Abbeys Way (which links with more fine Borders towns – Kelso, Selkirk, Jedburgh and Hawick), and is the start point of St Cuthbert’s Way. Galloway has a string of contenders for this list, with Newton Stewart being a popular gateway for Glen Trool and the Merrick. However we’ve picked out New Galloway at the very heart of the region; for hillwalkers it can serve as a base for trips to the Cairnsmore of Carsphairn or for the Rhinns of Kells ridge, but there’s plenty of family walks too, as well as fine wildlife in the Ken and Dee marshes. The fine old town of Oban is a bustling place. This is Calmac Central, being the main ferry port for reaching many of Scotland’s beautiful islands. For sea kayakers the coastline is superb, but the hinterland offers much for walkers to explore too. Just a short hop from Edinburgh, Peebles offers a rapid escape for jaded city dwellers. Set beautifully on the River Tweed, the town is a great base for walking and is on the route of the Scottish National Trail. It’s for mountain-bikers, though, that the town has become a mecca – Glentress and Innerleithen having the reputation for offering the best trails in the UK. Pitlochry has been a popular destination for visitors since at least Victorian times, aided by easy access from both the A9 and the railway. An attractive and busy centre, Pitlochry makes the most of its setting in Highland Perthshire, with a good network of local walks including around Loch Faskally and its fish ladder. Ben Vrackie rises directly above the town and is a very popular objective for visitors, whilst others use Pitlochry as a base for climbing many of the Perthshire Munros. Ullapool was was designed by Thomas Telford as a herring port, seeming almost to float on the waters of Loch Broom. With a population of only 1,500 it still serves as the capital of the Northwest Highlands, and is a gateway to many of Scotland’s most spectacular landscapes for walkers, kayakers, climbers – and even pot-holers. To the south are the great ranges of An Teallach, the Fannichs and the Beinn Deargs, whilst north leads into the amazing landscapes of Coigach and Assynt, where the mountains may be smaller in height, but rise in stunning isolation.