Exploring the outdoors around Glasgow

Despite being Scotland’s biggest city, it is surprisingly easy to leave Glasgow behind for a remote-feeling countryside adventure. Head out of the city boundaries in almost every direction and you discover farmland, hills and mountains that seem to pop up almost instantly.

Go by car, bus or train and it’s an easy and speedy transition from busy urban life to peaceful rural enjoyment. But I urge you to do as I prefer, to journey on foot or by bike on a superb network of off-road trails and paths to exit the city limits.

One of my favourite routes to adventures north-west of Glasgow is the famous long-distance trail, the West Highland Way, which starts in the suburb of Milngavie. As it winds its way through an ever-changing landscape en route to the Highlands outdoor town of Fort William, 96 miles away, the WHW gives access to many other hiking opportunities closer to the city.

First is Mugdock Country Park with myriad walking, mountain biking and orienteering trails suitable for anyone one looking for a mini adventure. My tip is to hire a fat bike from Mugdock Country Cycles for a bike ride that is both fast flowing and grin inducing. The park has an annual summer music, crafts and outdoors festival called MugStock that is worth booking up. 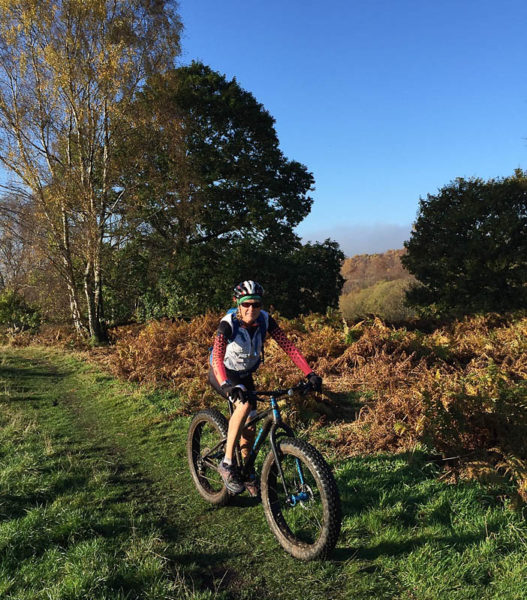 A little further north, you reach the western edge of the popular Campsie Fells, where a steep but short-ish hike takes you to a wide and airy fell-top arena with a series of undulating summits, including Dumgoyne and Earl’s Seat, near Strathblane, and the Meikle Bin in the Carron Valley.

Within 20km of the start of the WHW, the route journeys into one of Scotland’s two national parks, Loch Lomond & the Trossachs. The vast outdoors playground caters for all kinds of enthusiasts from Munro and Corbett bagging to kayaking, canoeing, wakeboarding, wake surfing and wild swimming on and in Loch Lomond.

The loch, which is the UK’s largest area of inland water, also plays host to a huge Great Swim event every August, while the loch-side town of Balloch is the destination for a retail outlet, Loch Lomond Shores, regular farmers’ markets, the Loch Lomond Highland Games in July and a Food & Drink Festival each September. 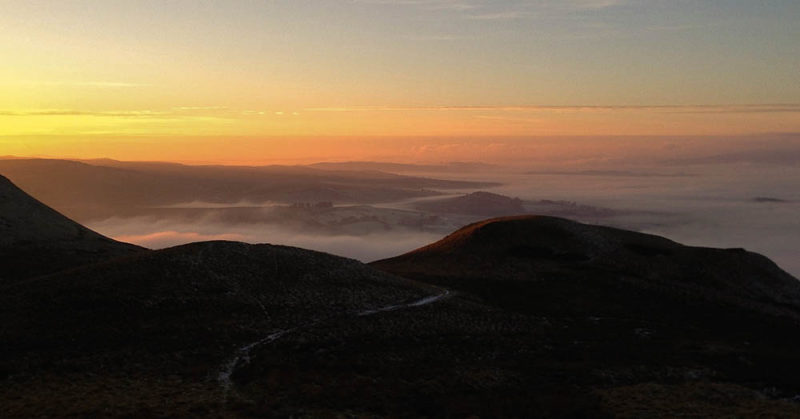 Did you know that the Highland Boundary Fault Line cuts through the loch from west to east and is the place where the lowlands meets the Highlands in Scotland?

Clear evidence of this is found at Ben Lomond, a mountain on the eastern shore of Loch Lomond. The most southerly Munro, it is also considered the gateway to the Scottish Highlands. Ben Lomond is one of the most frequently hiked Munros and whether you choose to walk the easier “tourist trail” to the 974m summit or make a circuit of the walk by first heading up the Ptarmigan Ridge, on a fine day the vistas are spectacular.

You can see the distinctive outline of Ben Lomond, as well as superb views of Loch Lomond and the many scattered islands, during a horseshore walk of Glen Striddle from the village of Luss on the west side of Loch Lomond.

When energy levels dip, there are plenty of places for a bite to eat including some of my recommendations, The Oak Tree Inn at Balmaha (incidentally at the foot of another popular walking destination, Conic Hill), the Three Sisters Bake in Killearn, Rhubarb Lime café in Kippen and the amazing Auchentullich Farm Shop and coffee stop at Arden on the A82. 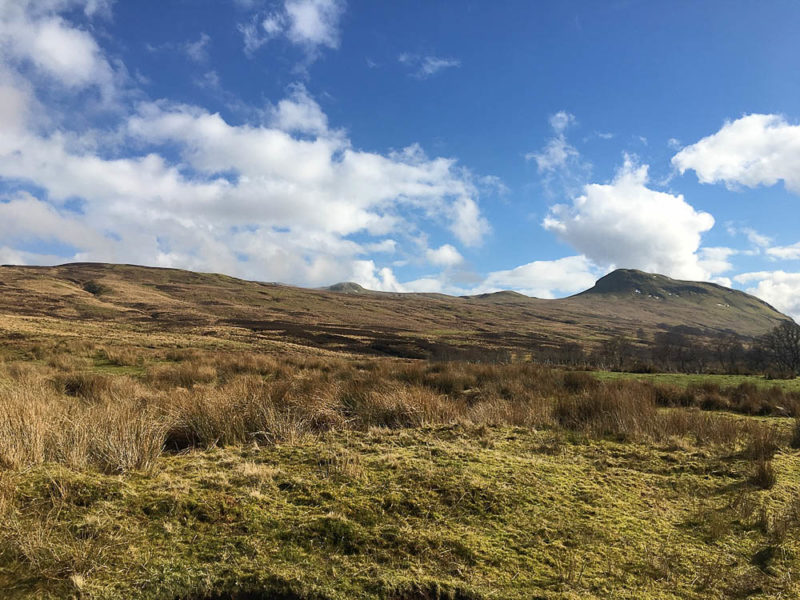 To discover more rural gems, this time to the east of Glasgow, there’s a convenient towpath on the Forth & Clyde Canal. Once an important industrial transportation link, the canal is now a popular traffic-free route for walkers, runners and cyclists. The waterway is also used by holiday canal boats, kayakers and even daring swimmers who take part in the annual Red Bull Neptune Steps adventure race at Maryhill Locks.

The canal eventually reaches Scotland’s capital of Edinburgh and is also part of another of Scotland’s Great Trails, the John Muir Way, which is waymarked coast-to-coast from Helensburgh in the west to Dunbar in the east.

A historic attraction close to the canal is the Antonine Wall, built by the Romans as fortification line between the Firth of Forth and the Firth of Clyde. There are many Roman ruins to visit, especially around Kirkintilloch and Croy, and a walk of Croy Hill and two Roman forts, from Auchinstarry Marina, Kilsyth, offers a balance of exercise and history-telling in one package.

Following the John Muir Way, named after the Dunbar-born father of America’s national parks, in the opposite direction takes walkers and mountain bikers to the north-west of Glasgow and the Kilpatrick Hills. So often over-looked as people drive west on the busy A82, headed for more distant destinations, the Kilpatricks have been enjoying a quiet transformation in recent years with many more accessible paths and trails.

While it used to be rare to see another person while walking, running or mountain biking on this undulating range of hills between Strathblane in the east and Dumbarton in the west, on a weekend or a sunny day you might now meet perhaps two or three other people. These are my favourite local hills thanks to the solitude and wild-style feel that you get the minute you leave the roads and buildings behind.

The views from the hill paths and summits, such as Duncolm, the highest at 401m, and Doughnot (375m), are stunning whatever the weather and with Glasgow, Clydebank, its cranes and the thick line of the River Clyde spread out just below it always reminds me how brilliantly close I am to both urban and rural entertainments.

The Kilpatricks are also home to the wonderfully named Whangie. A short uphill walk from Queen’s View car park on the A809 – a favourite of my whippet because it’s usually muddy and seldom has sheep or other dogs – sees you passing through a bizarre rock formation, which looks like a huge gash in the land. The narrow cleft is divided from the open air by a wall only a few feet thick on one side. Unsurprisingly, the 30m walls of the Whangie are also popular with rock climbers.

A new extension to the John Muir Way offers a delightful 10km circuit of Burncrooks Reservoir on well-packed trail from Edenmill Farm Shop, near Carbeth, also in the Kilpatricks. A longer route provides a countryside connection from Milngavie to Balloch, via Burncrooks, for both walkers and mountain bikers. 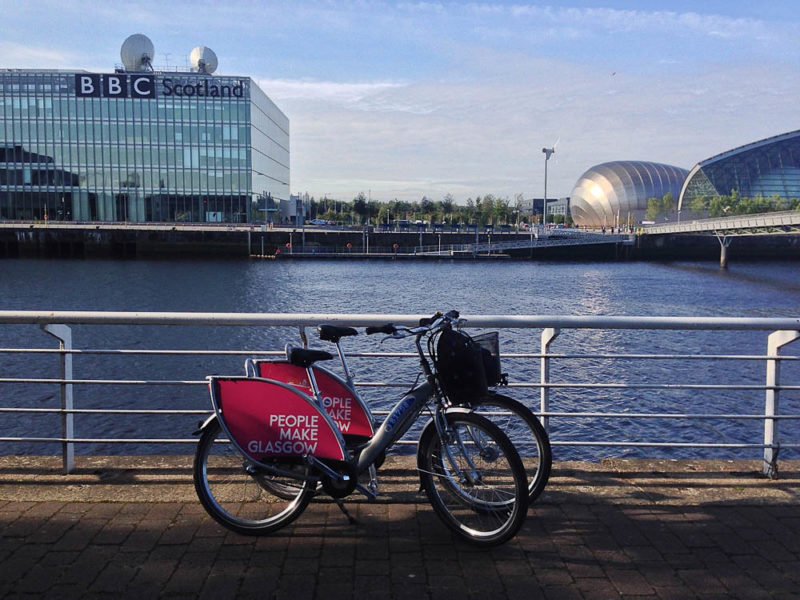 Next Bikes on the banks of the River Clyde in Glasgow

Another waterway, the River Clyde, with its impressive industrial heritage, is located to the west of Glasgow. Visitors can board the paddle steamer, the Waverley, in Glasgow for a trip “doon the watter” (River Clyde) and into the Firth of Clyde for stop-offs at various locations, such as the North Ayrshire seaside town of Largs or Dunoon, on the Cowal Peninsula.

The wide-open rolling hills of the Clyde Muirshiel Country Park – Scotland’s largest regional park – is situated on the South Clyde estuary. It’s a great destination for people of all ages with have-a-go watersports sessions on Castle Semple loch, an easy walk from 235m to the top of Windy Hill at 316m, woodland trails and a beach at Lunderston Bay.

Reaching Ayrshire, as well as South Lanarkshire and East Renfrewshire, to the south of Glasgow is also possible by bicycle on the Sustrans NCN routes 7, 74 and 75. Rolling farmland and hills in an area of Scotland that is lesser visited but incredibly beautiful provides a walking haven, as well as a destination for exploring quiet roads by bike and trails on a mountain bike.

Whitelee MTB trails on Eaglesham Moor has 130kms of trails. The centre has been created amid the UK’s largest on-shore windfarm, which means it’s often windy although the views are surprisingly good. 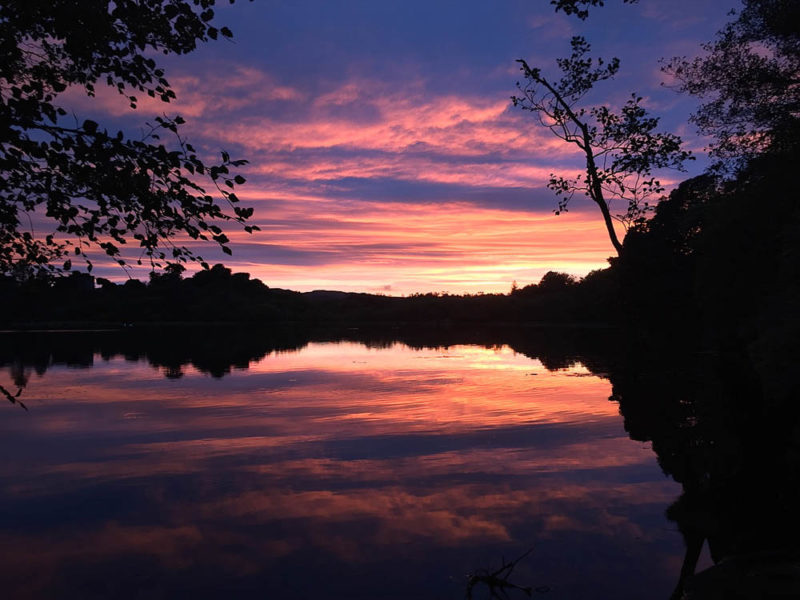 It’s possible to travel away from the sea and eastwards on the River Clyde on the Clyde Walkway. Some 40miles of walking or cycling takes you to the picturesque Falls of Clyde and the nearby heritage site of New Lanark. For a shorter outing you can head to Strathclyde Country park and the loch where many people watched the famous Brownlee brothers racing in the triathlon event at the 2014 Commonwealth Games.

Indeed, it was the Commonwealth Games in Glasgow that revealed, for the first time, to many people around the world, how wonderfully warm and welcoming my home city really is. Sometimes, instead of heading away from it, I stay within the city and simply go for a shorter walk, run or bike ride in one of numerous large parks, along the picturesque River Kelvin or on the banks of the River Clyde. You might even spot me on a silver and pink hired Next Bike!

If you have a weekend or a week to visit Scotland’s acclaimed city of Glasgow, and the surrounding countryside, I promise you won’t be disappointed.