We’ve previously posted our picks of the most beautiful beaches in the West Highlands – and our pick of the finest Scottish island beaches. For our latest gallery we undertake a journey down the opposite side of the country to discover Scotland’s stunning east coast beaches. The vast sweep of Sinclair’s Bay takes in a wide stretch of the Caithness coast between Wick to the south and Duncansby Head to the north. There are two magnificent castles – ancient and baronial at each end, and between them is a vast stretch of the finest sand backed by huge dunes, divided in two by the River of Wester. The beach is traversed on the penultimate stage of the challenging John o’ Groats Trail. Heading south there are fine beaches in Sutherland including those stretching north of Brora and south of Golspie and a wonderful one at Dornoch, whilst Easter Ross has a contender in Shandwick Bay, but our next choice is on the fertile Black Isle. Rosemarkie Bay forms the eastern side of the peninsula that runs out to Chanonry Point, famed for its dolphins, but the beach itself is a great place to visit in its own right, stretching 2.5km from the point to attractive Rosemarkie village and beyond. Nairn has the reputation of being one of the suniest and driest towns in Scotland, and it is blessed with two fine beaches. The west beach runs along the coastline beside the town itself, but it is the vast East Beach and its dunes that make our list – stretching out across the Culbin Sands nature reserve for mile after mile. The old fishing village of Findhorn, with its attractive harbour and cottages, and the well-known Findhorn Foundation eco-village nearby, is a popular place for those looking for a seaside trip. There is a tiny but lovely beach on the sheltered side of the spit extending out along the estuary of the river, but Findhorn’s main beach faces north, and is the first section of the massive sweep of coast around Burghead Bay. 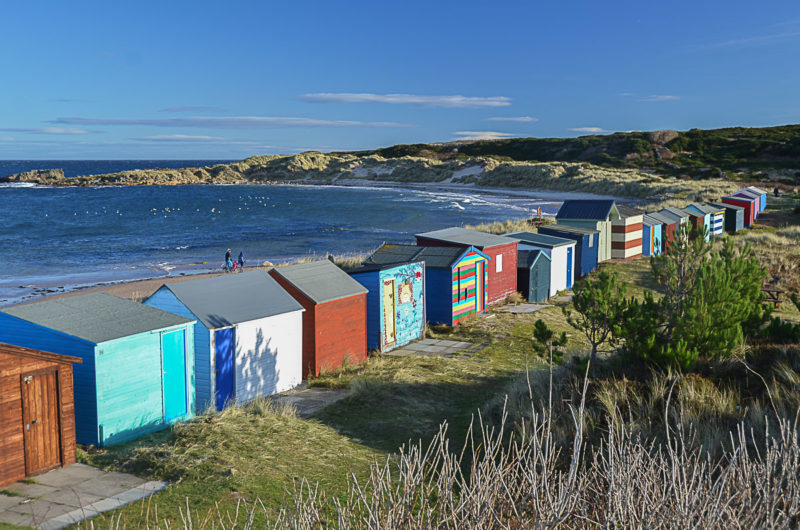 Much lesser known is wee Hopeman beach, one of a string of beaches all linked by the Moray Coast Trail. The row of multi-coloured beach huts here is an irresistable draw for photographers. The classic coastal walk from Hopeman to Lossiemouth finishes with a long walk across these fine sands. Covesea Lighthouse rises between the two sections of beach here, leading right up to the edge of Lossiemouth itself. At the eastern edge of Moray is Cullen Bay, adjacent to its namesake village with a picturesque fishertown and an array of antiques and collectables shops. The beach here is distinguished by the rock stacks known as the Three Kings, whilst at the far end of the beach is the Whale’s Mouth – a dramatic deep arch or cave. A short coast walk to the east of the village reveals another, more secluded beach – Sunnyside Bay. Heading east into Aberdeenshire the run of fine beaches continue, with Boyndie Bay between Whitehills and Banff and lovely little Cullykhan Bay near Pennan both deserving a mention. Our pick here though is the fine beach shown above at Sandend. 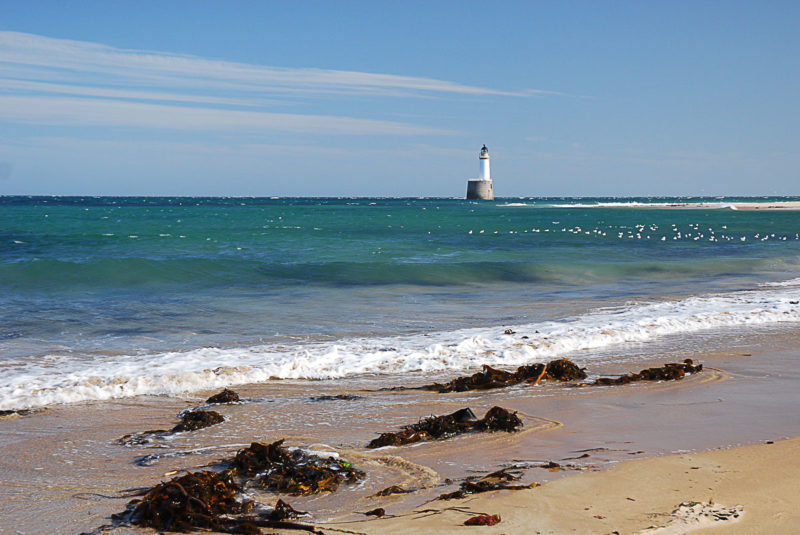 Rounding the great corner of northeast Scotland at Kinnaird Head, the coastline immediately continues its run of beaches with Fraserburgh Bay. Our pick, though, is an even bigger stretch of sand, running from St Combs to the dramatic tidal lighthouse at Rattray Head. This whole stretch of coast is a string of beaches, but Forvie Sands deserves special mention, running from Collieston to the mouth of the River Ythan. This is a National Nature Reserve – with a vast area of dunes and coastal heathland providing habitat for many birds. South from Forvie is Balmedie Beach – part of a country park – and, of course, the fine beach in Aberdeen itself. Our next choice, though, is another National Nature Reserve, St Cyrus. The beach here is backed by cliffs and known for its grasslands, rare flowers and butterflies and moths. Crossing into Angus, Montrose Beach is certainly well worth a mention – and a visit. Further south Angus has more beaches at Arbroath and Carnousite, but few would deny that Lunan Bay is the finest beach in this area, a magnificent sweep of sand with a cave and arch at its northern end, and even a ruined castle. 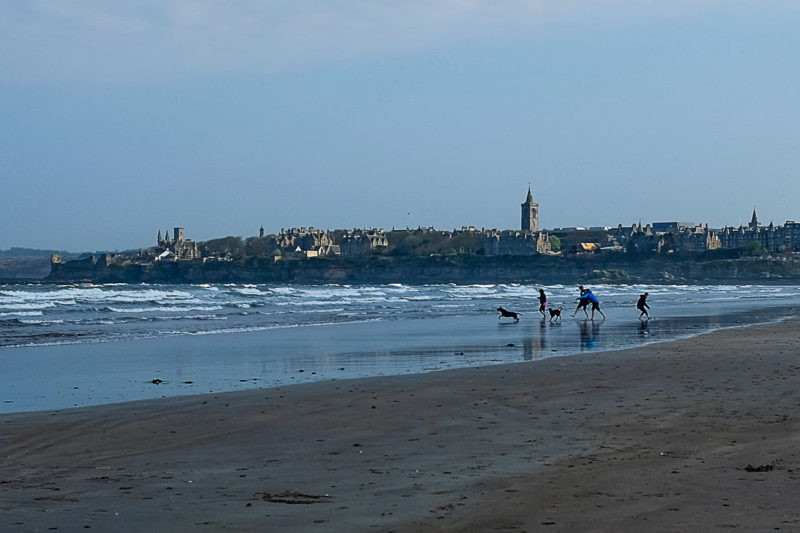 Cross the Tay Bridges and Fife almost immediately provides a grand beach, Tentsmuir, which stretches for miles and is a vital breeding ground for grey seals. Much better known, however, is the golf and university town of St Andrews. The east sands here are fine enough, but it is the West Sands – running for miles alongside the golf courses – that are the most spectacular – and made famous by the beach training scene in the film Chariots of Fife. Continuing our journey, the Fife Coastal Path reveals many more beaches, especially around Elie and Largo, before the Forth Bridges are reached. East of Edinburgh, East Lothian offers a wealth of features to attract coastal explorers. Aberlady Bay is a beautiful local nature reserve (the first in Britain when declared in 1952) and is renowned especially as a bird-watching venue. Beyond it there is another beach at Gullane Bents. 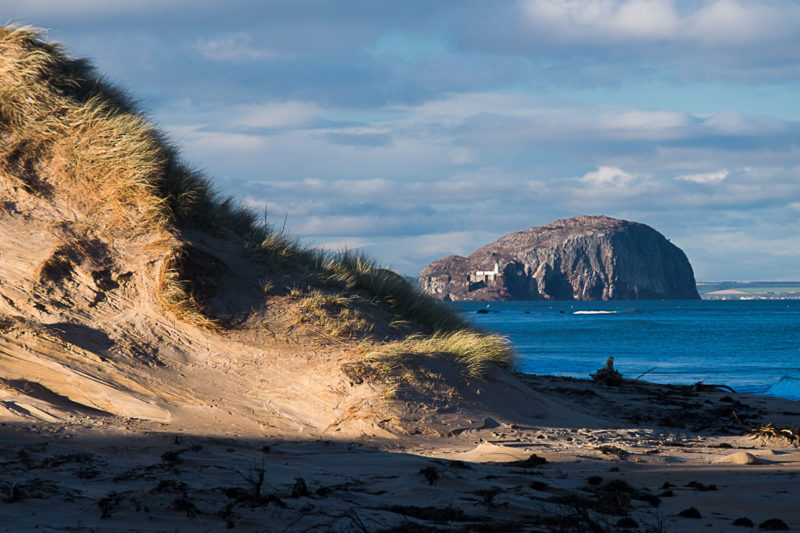 Further on is North Berwick, one of Scotland’s most interesting coastal towns with two great beaches, the Scottish Seabird Centre and a harbour from where you can get boat trips to visit the majestic Bass Rock. There are more smaller beaches before the coast reaches the sweep of Ravensheugh Sands and Belhaven Bay to the north of Dunbar. Both these beaches also enjoy an outlook towards the the Rock – a fitting place to end this gallery.