The Great Caledonian Forest once covered much of Scotland, below the high tops; Caledonia – the Roman name for Scotland – means wooded heights. The forest declined over thousands of years, due to both a slow change to a wetter, windier climate and to being felled by man and overgrazed by sheep and most especially deer.

In the twentieth century huge areas of Scotland were planted commercially with sitka spruce, lodgepole pine and larch. Nonetheless we’re still lucky to still have some spectacular remnants of the ancient forest – including Scots pine, birch, rowan, aspen and – towards the west coast – oak. Home to some of our rarest species including crossbill, capercaillie and crested tit as well as being the stronghold of the red squirrel, their heritage and conservation value is now well recognised and, through fencing and reductions in numbers of red deer, some of these native forests are regenerating or expanding once more, and new areas are being planted with native trees.

“”The clearest way into the Universe is through a forest wilderness,” said John Muir. Could there be a more magical place to take a walk? 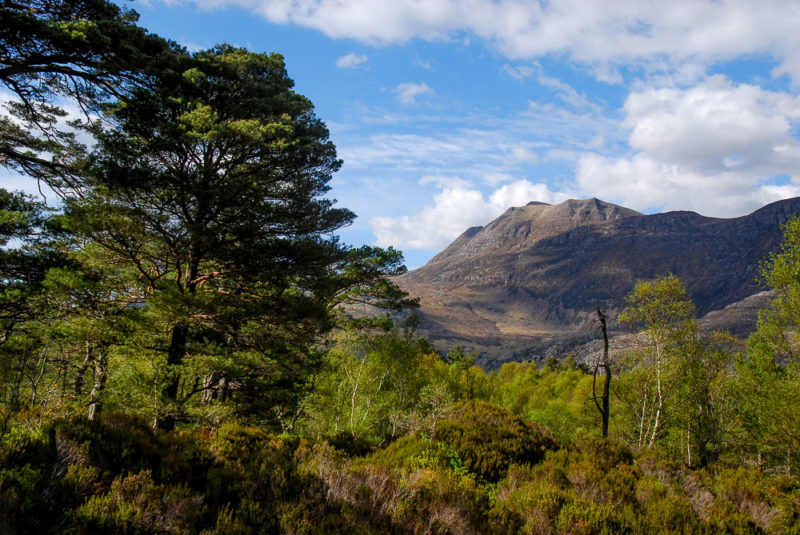 These stunningly beautiful ancient pinewoods clad the southern slopes above the head of Loch Maree, which has the reputation of being Scotland’s most beautiful freshwater loch. They have a place in conservation history too, as a critical part of the Beinn Eighe National Nature Reserve – the first ever established in Britain back in 1951, and early efforts focussed on protecting the declining woods from too many deer. Later the islands in the loch also became a National Nature Reserve. Facilities for walking here are superb, from the short Visitor Centre trail to the lovely Woodland Trail, whilst the amazing and spectacular Mountain Trail is billed as Britain’s only waymarked mountain walk. The woods also form the approach to mountains such as Ruadh-stac Beag and Meall a’ Guibhais.

Inchcailloch and the Loch Lomond oakwoods 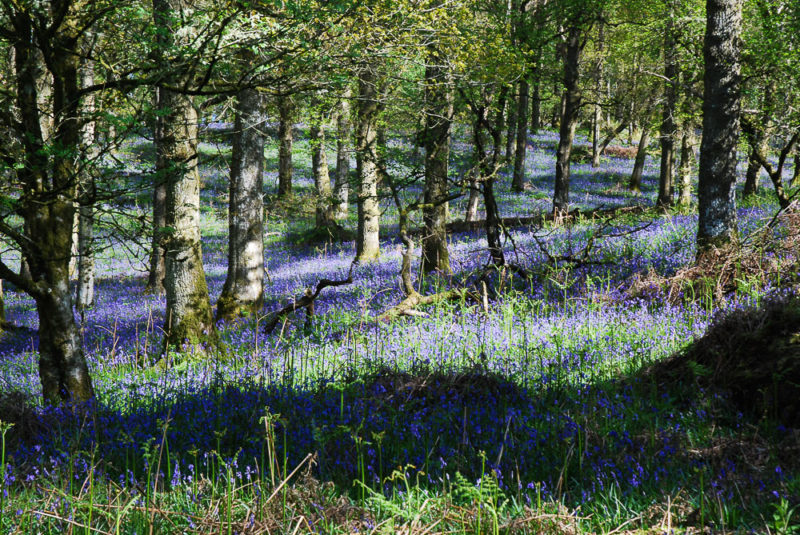 The Bonnie, Bonnie Banks of Loch Lomond would probably not be sung about were it not for their surviving oakwoods. There are fragments of native sessile oakwoods along much of the eastern sides of the loch, as well as downy and silver birch; there are also many English oaks planted for charcoal from the seventeenth to nineteenth century. The West Highland Way threads all along this side of the loch, whilst circular walks visit the RSPB reserve at Inversnaid, Ardess, Cashel and Sallochy. Perhaps the pick of the woods to visit though is out on the loch – a short boat trip leads to the stunning island of Inchcailloch, whose woods are carpeted with bluebells in the spring. 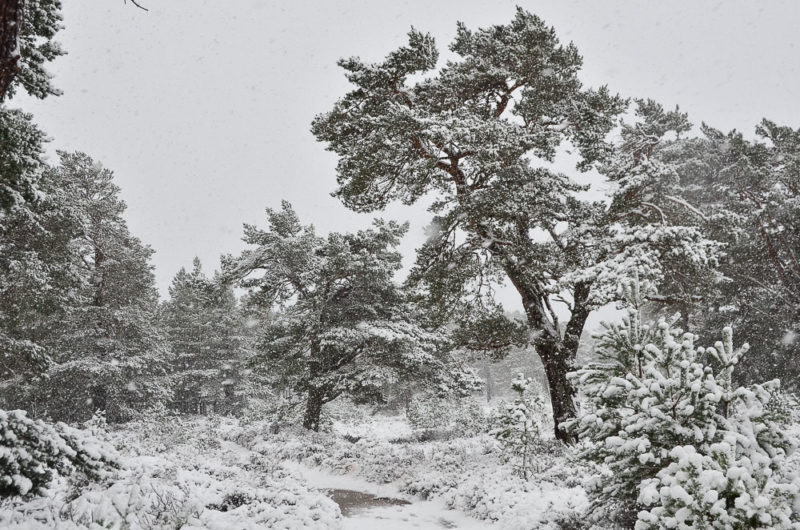 For many people, Rothiemurchus is the grand daddy of Scotland’s Caledonian pine forests. A vast green expanse with the Cairngorm mountains as an incomparable backdrop, the forest was owned by the Grant family for 500 years before being sold to the Forestry Commmission in 2014. David Attenborough described it as ‘one of the glories of wild Scotland’ and it is hugely popular with visitors; the walk around Loch an Eilein having been voted Britain’s best picnic spot. Other options include a circuit to Iron Bridge (or even heading on through the Lairig Ghru), or using the forest as an idyllic approach to the great mountains of the Cairngorms such as Braeriach. Adjcaent are the pinewoods of Glen Feshie – if anything, even more beautiful to visit. Tyndrum Community Woodland is being expanded and planted with increasing numbers of native trees, but the real gem here is Coille Coire Chuilc seen across the other side of the River Cononish. Munro-baggers head up through this on a very boggy approach to Beinn Dubhcraig (further impeded by the disintegration of the bridge over the Allt Gleann Auchreoch) – but the recompense for their hardships is a visit to one of the most beautiful ancient pinewood remnants in the west. For those looking for an easy walk, the woods can be more distantly seen from the track up the north side of the River Cononish. 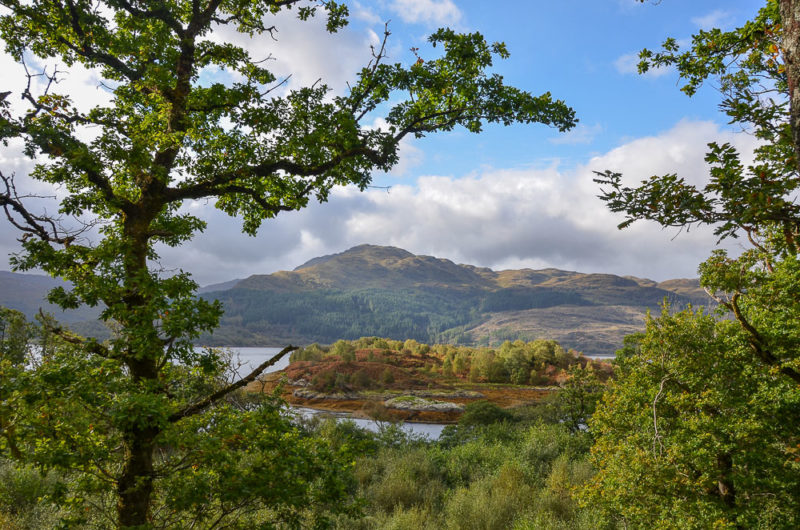 Although fragmented, the oakwoods around Loch Sunart and Ariundle are amongst the most important remains of the ancient oakwood that once spread along Europe’s Atlantic edge from Spain and Portugal. Filled with a huge diversity of mosses, lichens, liverworts and ferns growing over the damp woodland floor, they are a magical place to visit. Start at the Ariundle Centre, where there are both short circular walks into Ariundle Forest and longer ones climbing to the old lead mines or up onto the mountains. Down by Loch Sunart, there are walks to the wildlife hide at Garbh Eilein, to Sailean nan Cuileag and in the oakwoods by Salen. 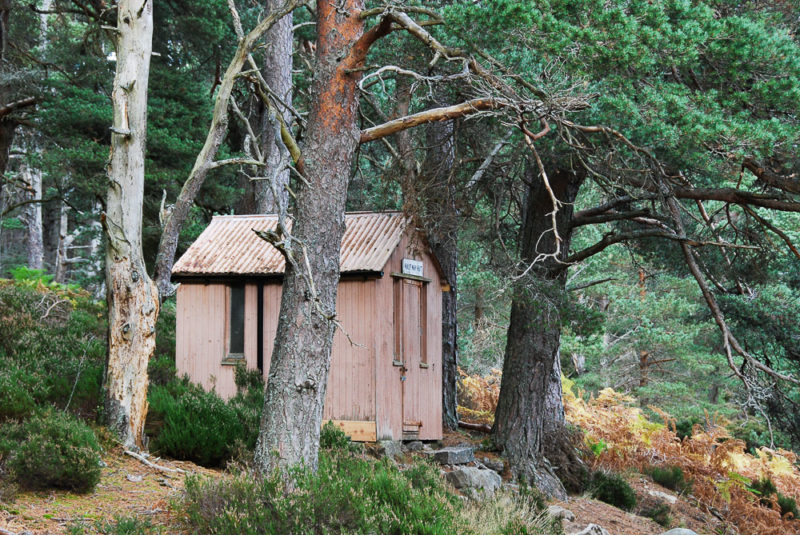 The southern side of the Cairngorms, like the north, has some very fine ancient pinewoods. Glen Derry is a beautiful and very popular place to visit, often passed through by hillwalkers en route to the mountains beyond, whilst Balmoral has the very extensive pines of Ballochbuie. However, for our first pick on this side we’ve picked out the perhaps lesser known pinewoods of Glen Tanar, another National Nature Reserve, and used as an approach to Mount Keen. Also nearby and well worth visiting are the birchwoods of the Muir of Dinnet – see the circular walk around Loch Kinord. 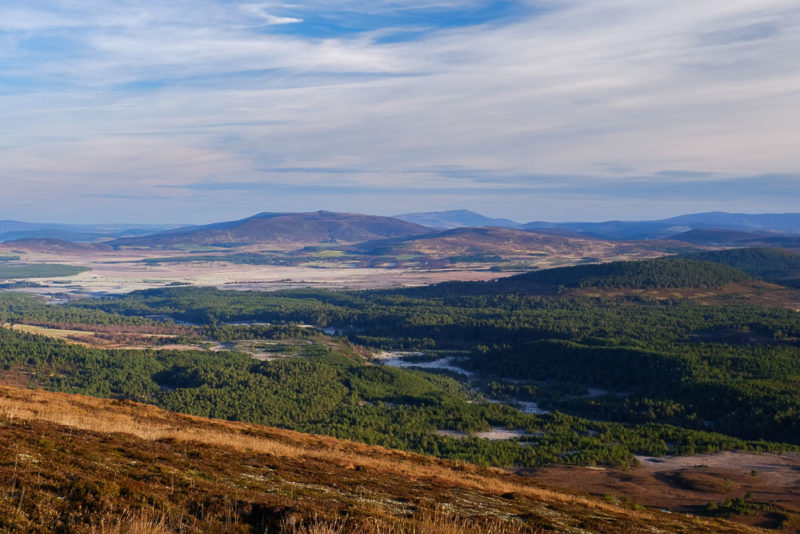 Though perhaps a little less well known by name than neighbouring Rothiemurchus, Abernethy Forest is the largest remaining area of the ancient Caledonian Forest. This vast expanse is owned and cared for by the RSPB, and is home to the Loch Garten ospreys as well as being a key refuge for the endangered Capercaillie, the huge grouse known to Gaels as the ‘horse of the woods’ due to it’s clip-clop call. The forest extends from Dell Woods on the very edge of the village of Nethy Bridge, through ever wilder landscapes up the Nethy where natural regeneration and a program of planting are extending the forest edge up through the Ryvoan Pass. This will eventually link the forest to Glenmore and Rothiemurchus. 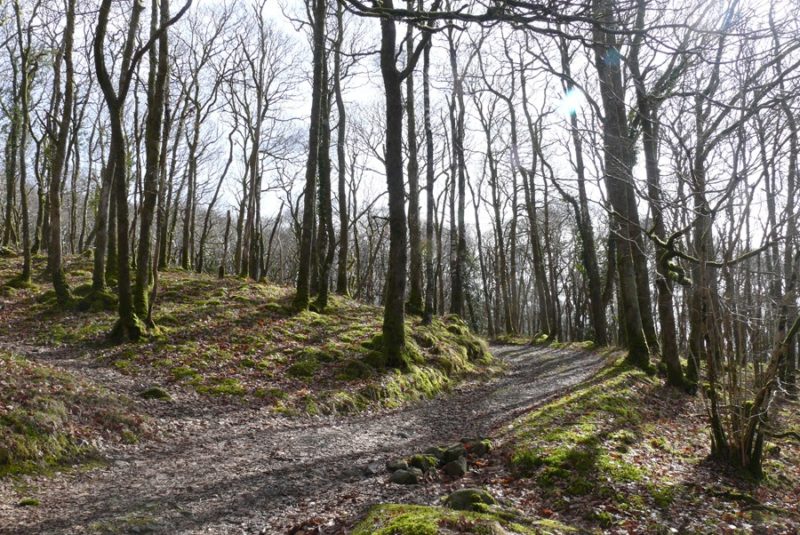 The Wood of Cree – north of Newton Stewart – is the largest area of native woodland in southern Scotland. The wood was coppiced for centuries and almost clear felled by the 1930s, but is now cared for by the RSPB. Look out especially for willow warblers here, or for otters in the river; the display of bluebells in the spring is spectacular. 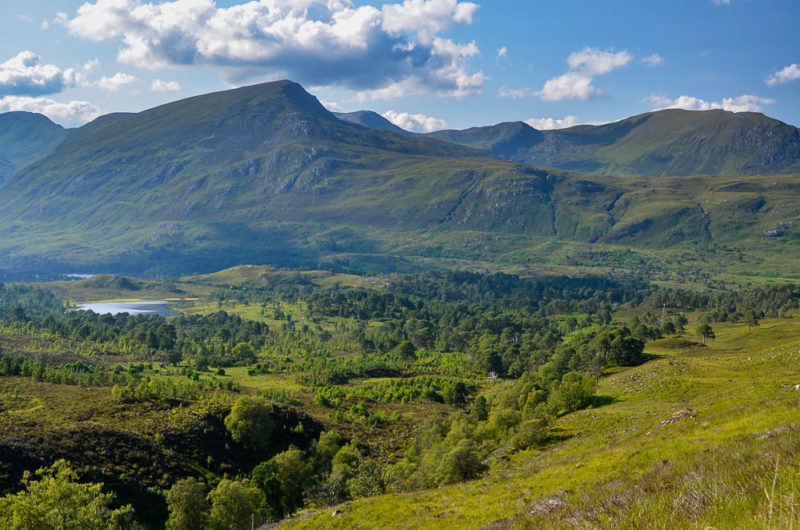 Despite the magnificence of the great forests of the Cairngorms, some people reckon the pinewoods that clothe Glen Affric are the most beautiful of all. Much of it owned by the Forestry Commission, the glen was subject to some intensive plantings in the past but today the emphasis is thankfully on the importance of natural processes, fostering a return to natural woodland. The walks around Dog Falls and the River Affric are deservedly popular, whilst the wild circuit of Loch Affric is regarded as a classic. The upper part of the glen is seeing an expansion of the forest through the work of the conservation charity, Trees for Life. A new long distance route, the Affric Kintail Way, runs through the whole length of the glen. 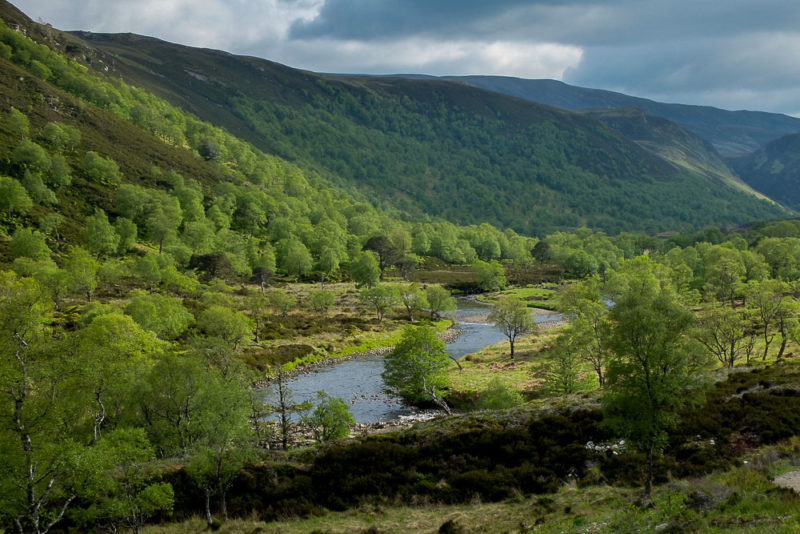 The pinewoods of Amat Forest – around Alladale – are the most magnificent in the far north of Scotland. The estate here has been the subject of great controversy around possible plans to enclose the whole vast area with a giant fence, with wolves and other formerly native animals captive within, barring the open access that walkers enjoy under Scottish law. But few would argue with the efforts that have been made to regenerate the woodland here, with vast areas of birches now extending from the pinewoods far up Gleann Mor (visited as the approach in our Carn Ban route). 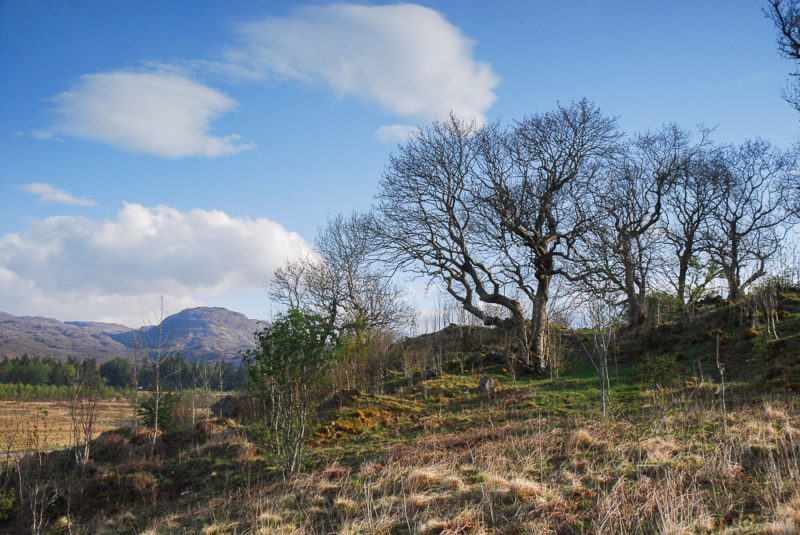 The tiny area of woodland at Rassal – another National Nature Reserve – may seem out of place amongst some the vast forests also on this list, but this outlier is the most northerly Ash woodland in Britain, and is thought to be at least 6,000 years old. 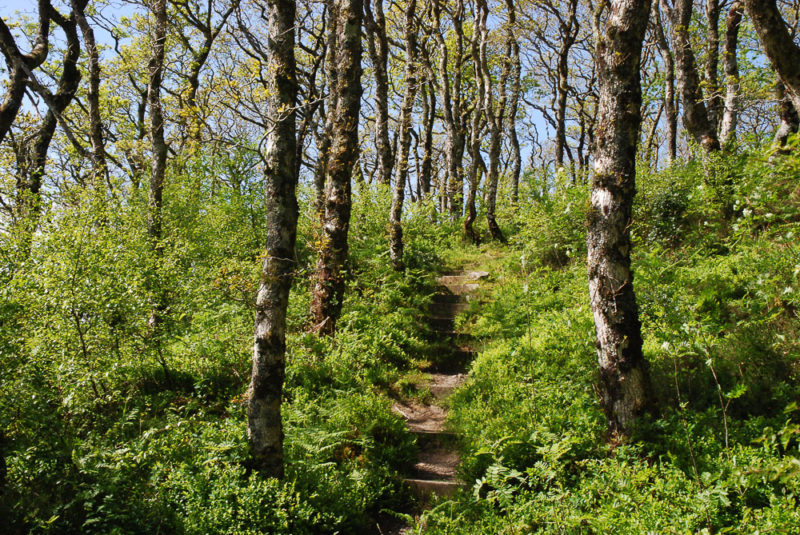 The Taynish peninsula has one of Britain’s oldest and largest surviving ancient oakwoods. Set in Knapdale – not far from the historic reintroduction site for the beaver near Loch Choille Bhar, the woodlands at Taynish are wonderfully varied and sweep right down to the waters of Loch Sween that almost surround them. In spring, the bluebells again provide an additional touch of magic to the stunning circular walk we describe here. 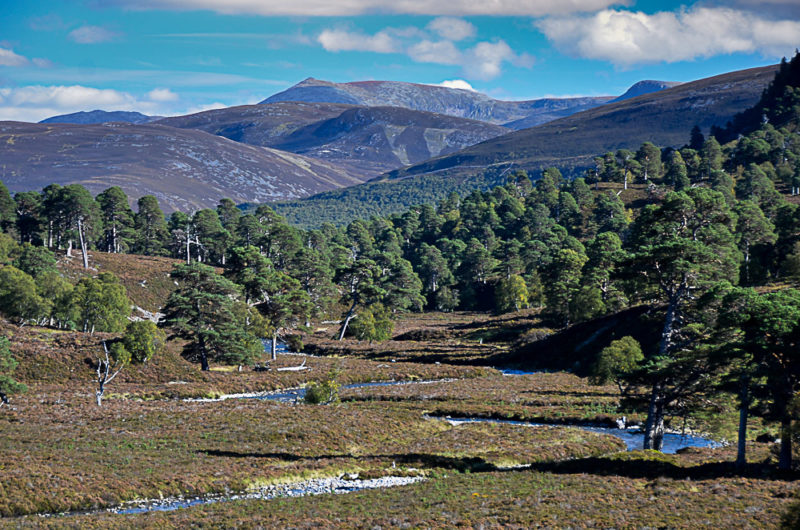 Our second choice from amongst the fine forests of Deeside is the magnificent pinewoods of Glen Quoich. These are usually passed by hillwalkers aiming for Beinn a’ Bhuird – but are really a superb destination for a walk in their own right (the Linn of Quoich – when all the bridges are up!) 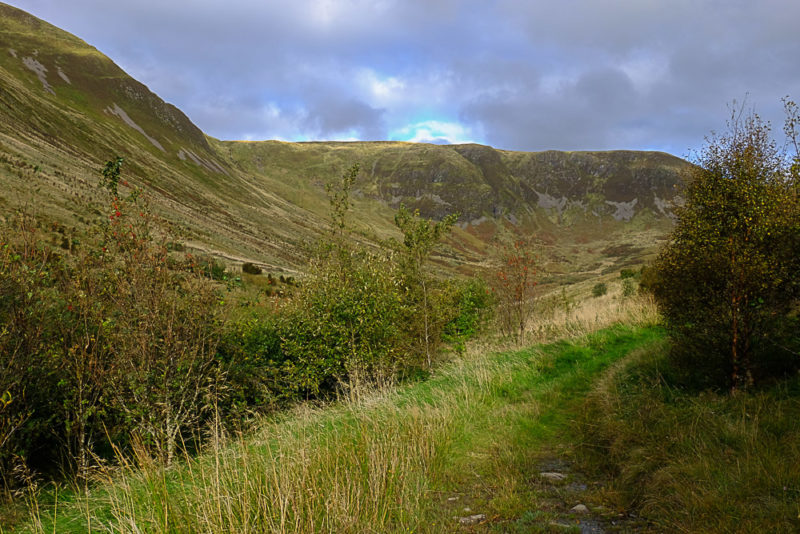 The Carrifran Wildwood is not so much an ancient woodland – more a work in progress. Since 2000 this spectacular ice-gouged valley has been the site of the Carrifran Wildwood. The aim of the land management here – carried out by a voluntary group – is to restore the valley to ecological health. Before the coming of sheep, much of the Southern Uplands was a wooded landscape. The Carrifran Wildwood group’s work on re-establishing native trees here – intervening just enough to allow nature to take a hold once more – enables visitors and others to better understand what much of the Border country would once have looked like. 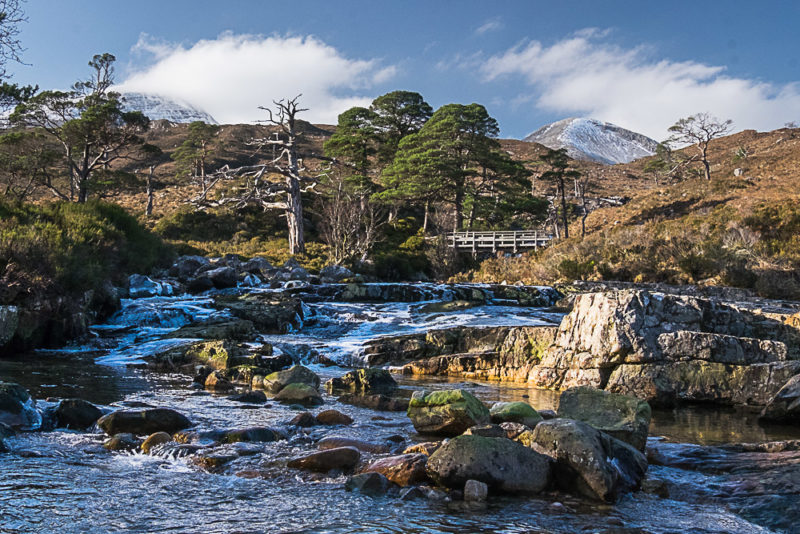 Strathcarron has some fine Caledonian pinewood remnants on both sides of the river. The Allt a’ Chonais pinewood is the most extensive, but our pick is the smaller but stunningly beautiful pinewood around the Easan Dorcha (Dark Falls) – and the tiny tea-hut bothy. 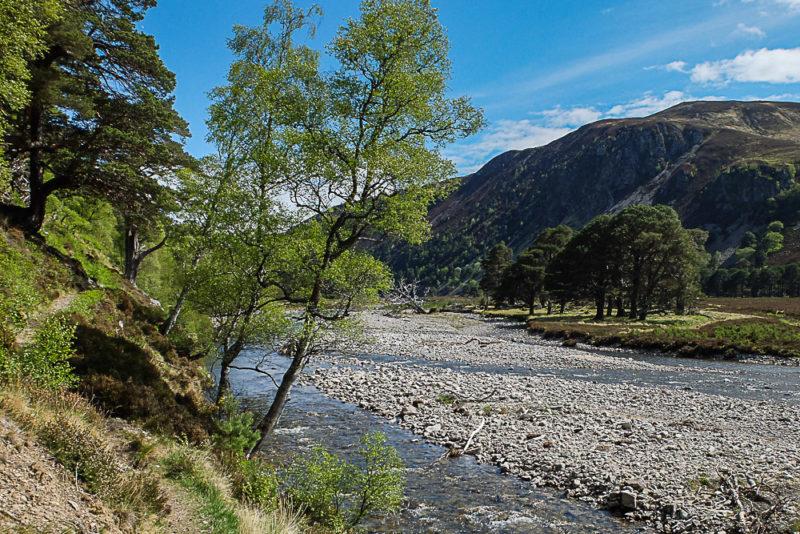 Our final pick is Glen Feshie. Undoubtably one of Scotland’s most beautiful glens, this renowned glen penetrates deep into the mountains and its splendour to large degree depends on its stunning forests. After years of decline the pinewoods here are regenerating spectacularly due to the enlightened conservation policies of the glen’s current owner, through greatly reducing deer numbers.