Walkhighlands features 43 walks that visit one of Scotland’s remarkable collection of lighthouses. Taking all manner of shapes and sizes, these sentinels of the sea usually provide striking landmarks for those exploring on foot, as well as acting as a warning to boats out on the water. Here we pick out 16 of the finest. Rising splendidly off the Aberdeenshire seaboard on a stone plinth, Rattray Head is a striking sight from the magnificent beaches between Peterhead and Fraserburgh. Like almost all Scottish lighthouses, it was built by the Stevenson family – in this case by David Stevenson in 1895. It is the termination of a fine sandy walk from St Combs. Whilst in the area, be sure to visit the Loch of Strathbeg RSPB reserve, and on a lighthouse theme, visit the museum of Lighthouses at the Kinnarid Head lighthouse by Fraserburgh. Other nearby lighthouses include Girdle Ness in the city of Aberdeen. The unusual square towers of Carraig Fhada have long greeted travellers as they arrive in Port Ellen on the ferry to Islay. Its unusual appearance is due to its having originally been commissioned as a memorial tower to a Lady Ellenor Campbell; only later was it converted to use as a lighthouse by the Northern Lighthouse Board (which operates all Scottish lights to this day). The walk here is a short one visiting two very fine beaches – including the Singing Sands of Traigh Ban. The squat tower of Dunnet Head is the most northerly point of mainland Britain, with the headland extending several miles further north than the better known Duncansby Head – which has its own lighthouse and fine walk visiting magnificent sea stacks. The walk out to Dunnet Head, though, is a coastal classic, a rougher and tougher cliff-top excursion offering stunning views across to the Isle of Hoy and its Old Man. Start Point is the easternmost point of Sanday, and one of several lighthouses in Orkney. Its vertical black-and-white stripes give it a unique and striking appearance, and the tidal walk out to Start Point gives views which stretch from the lighthouse on North Ronaldsay (which will be featured on Walkhighlands early summer 2015) to that on Fair Isle. Another fine northern Orkney lighthouse to walk to is Noup Head on Westray. The tall and slender tower of Scurdie Ness guards the headland south of Montrose, at the mouth of the Montrose Basin – a fine reserve for birds. It marks the focal point of an excellent coastal circuit round to Boddin Point from Ferryden, also visiting the striking Elephant Rock. Leaping 285km northwest takes us to the small island of Scalpay, linked to neighbouring Harris by an elegant road bridge. The Scalpay Heritage Trail is a rough, wet but stunning circular walk exploring this little-known island, culminating in the fine and remote lighthouse, built by Robert Stevenson in 1824 but replacing an earlier light which was one of the first in Scotland. Covesea Lighthouse towers over the vast beach that extends for miles west from Lossiemouth on the Moray coastline. An 1826 storm which sank 16 boats on the Moray Firth led to a public campaign which saw the lighthouse eventually completed in 1846. The light was extinguished in 2012 and it now belongs to a local community trust. It is on the popular Hopeman to Lossiemouth stretch of the Moray Coastal Trail. Picturesque Rubha nan Gall is hidden from view from the roads on the Isle of Mull, but can be reached by a short but muddy walk from Tobermory. It was built in 1857 by Thomas and David Stephenson, and overlooks the northern entrance to the Sound of Mull. 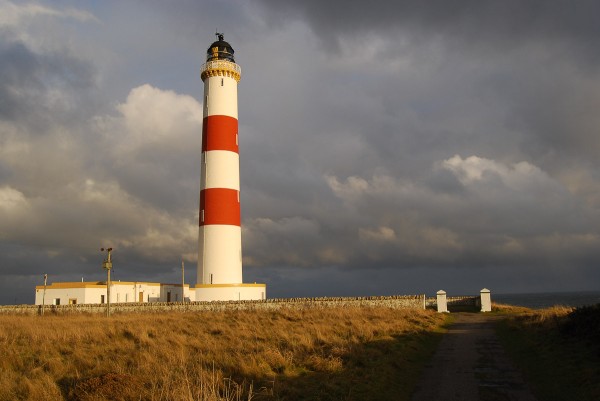 The red and white stripes of Tarbat Ness decorate a tower that stands 57m in height and dates back to 1830. It stands at the northern end of the Tarbat peninsula makes for a very fine circular coastal walk from Portmahomack. Be sure to also visit the Tarbat Discovery centre for an introduction to the area’s remarkable Pictish remains. The Mull of Galloway is the southernmost point in Scotland, and the lighthouse stands near the edge of a 70m cliff looking out towards the Isle of Man. The peninsula is an RSPB nature reserve, and the walk around the Mull of Galloway makes for a magnificent half day outing. The walk out to Neist Point – the most westerly point of the Isle of Skye – ranks amongst the most popular on the island. The view of the lighthouse out beyond the great rock buttress of An t-Aigeach is iconic, and this must be one of the most stunning places to watch the sunset – or for Minke whales out in the waters. 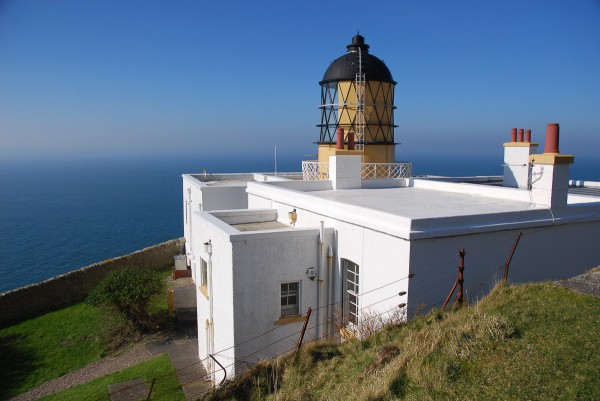 The Paul McCartney song – the biggest selling single ever recorded when it topped the charts for Christmas in 1977 – ensures that the very remote tip of this lengthy Argyll peninsula is famous for more than its use for judging censorship by the British Board of Film Classification. Walkhighlands features the short walk down the private road to reach the lighthouse complex, passing the memorial to the tragic 1994 Chinook helicopter crash.

A much taller and more elegant Argyll lighthouse is the most westerly point on mainland Britain – Ardnamurchan Point. Ruvall – or Rubh a’ Mhail – is the most northerly point of Islay, and the second lighthouse in the list from that island. It is the turning point for a lengthy walk north from near Bunnahabhain, famed for its distillery. A third Islay light well worth a mention is the most westerly, standing offshore of Portnahaven on Orsay island. Though of rather squat appearance, Stoer Head merits inclusion for its position on a stunning stretch of coastline, set to the north of Assynt‘s many fine beaches. It is the start point for a clifftop walk out to the spectacular sea stack – the Old Man of Stoer. Cape Wrath is the most northwesterly point of the UK mainland – and reaching it requires some determination. There is no direct road access to this empty peninsula, but in summer a small ferry from Keoldale near Durness transports passengers across the Kyle, from where a connecting bus braves the adventurous road out to the lighthouse. The views are epic, and the nearby cliffs of Clo Mor are the highest on the mainland. For travellers on foot, the lighthouse is the end of the very challenging Cape Wrath Trail backpacking route, the even more epic Scottish National Trail, or just the classic coast traverse from Sandwood Bay. Last but by no means least on our list is the Butt of Lewis, or Rubha Robhanais to give its proper Gaelic name. This slender brick-built tower is the most northerly point on the Isle of Lewis, and makes a grand finale to a classic coastal circuit from Eoropie as well as to our lighthouse list.